Subject:’IMPORTANT!!’
I didn’t recognise the name of the sender, let’s call her Nadia Johnson.
What could it be?
What have I missed?
Is it the bank?
Tax office?
Maybe it’s something good?
A publisher with a huge cheque wanting to turn this blog in to a book? What could it be? Should I be worried? Excited?
Turned out ‘Nadia’ was a student looking for a job.
So it was a kind of trick.
I guess Nadia thought that if she put ‘IMPORTANT!!’ in the subject box I’d read on.
She was right.
But she hadn’t considered how I’d feel by the end of the email – tricked.
So if someone asked me to pick one email from my inbox that wasn’t important, I’d pick that one.
Because she’d forced me to assess its importance.
In advertising, over-claiming is second nature .
It’s easy to get clients to buy it, but hard to get the public to.
If someone reads ‘Product X will rock your world’, they are forced to assess whether it’s true.
Generally, they conclude that it isn’t.
So it gets put into a big bin marked ‘Products That Won’t Rock My World’.
It also demonstrates that you don’t understand, or care, about the person on the other end of your message, maybe even that they are daft enough to believe it.
Hardly a way to create empathy.
Let’s say the subject of Nadia’s email was ‘Not important’.
Then I couldn’t help but think that Nadia was being too self effacing, too polite.
But if asked to pick an email that wasn’t important, it wouldn’t be Nadia’s, because she had made a connection, albeit a small one.
Ultimately, advertising is simply connecting companies to people.
Understanding context is crucial.
But it’s hard for advertising to put out messages that are realistic.
If you can legally put messages out that say your product will rock your world, why wouldn’t you?
It’s a good theory, but harder to sell than ‘We’re AMAZING!’.

EXHIBIT A: Channel 5.
Today, a new channel gets lost amongst the hundreds already out there.
In the late nineties, a new channel was the fifth channel.
Good news, the new channel got a tremendous amount of media attention.
Bad news, the channel turned out to be rubbish and got a tremendous amount of media attention.
They had a transmission issue which meant the picture was fuzzy.
This was probably just as well, because the programmes were shocking.
Dodgy Australian soaps like ‘Sons & Daughters’ and ropey French gameshows like ‘Greed’.
That was their high-end offering, lower down their schedules they had a whole bunch of cheap documentaries; ‘Strictly Hairdressing’, ‘Swindon Superbabes’ and ‘On the Piste’.
They had tacky chat shows like ‘Roy’, ‘HG’s Planet Norwich’ and ‘Melinda’s Big Night In’.
Their lead soap, ‘Family Affairs’, was so poor they blew up the majority of the cast in a boat, so they could start again.
People ignored Channel 5. It had, appropriately enough, a 5% share.
It was a big bowl of wrong.
So a couple of years in they felt they needed a new ad agency to get people to give them another chance.
Before they came into CDD for a chemistry meeting, we thought we’d get the ball rolling by sketching out a few ideas to talk about.
So how the hell do we get people to tune into something that had been lambasted since it launched?
Why would anyone believe it’ is now good?
They can’t just say they are now good, they’ll look as though they’re in denial.
If we say ‘Channel 5 are good’ people will simply think ‘Nope, they’re not’.
David Abbott used to say ‘a small admission gains a great acceptance’.
Our strategy was to admit we hadn’t been good.
If we say ‘Hands up, we were bad, but we’ve changed’ people will agree with the first bit and may be a little more open minded on the second bit.
It worked for Avis, Volkswagen and Skoda, why not Channel 5?
How exciting.
We got our Pentels out. 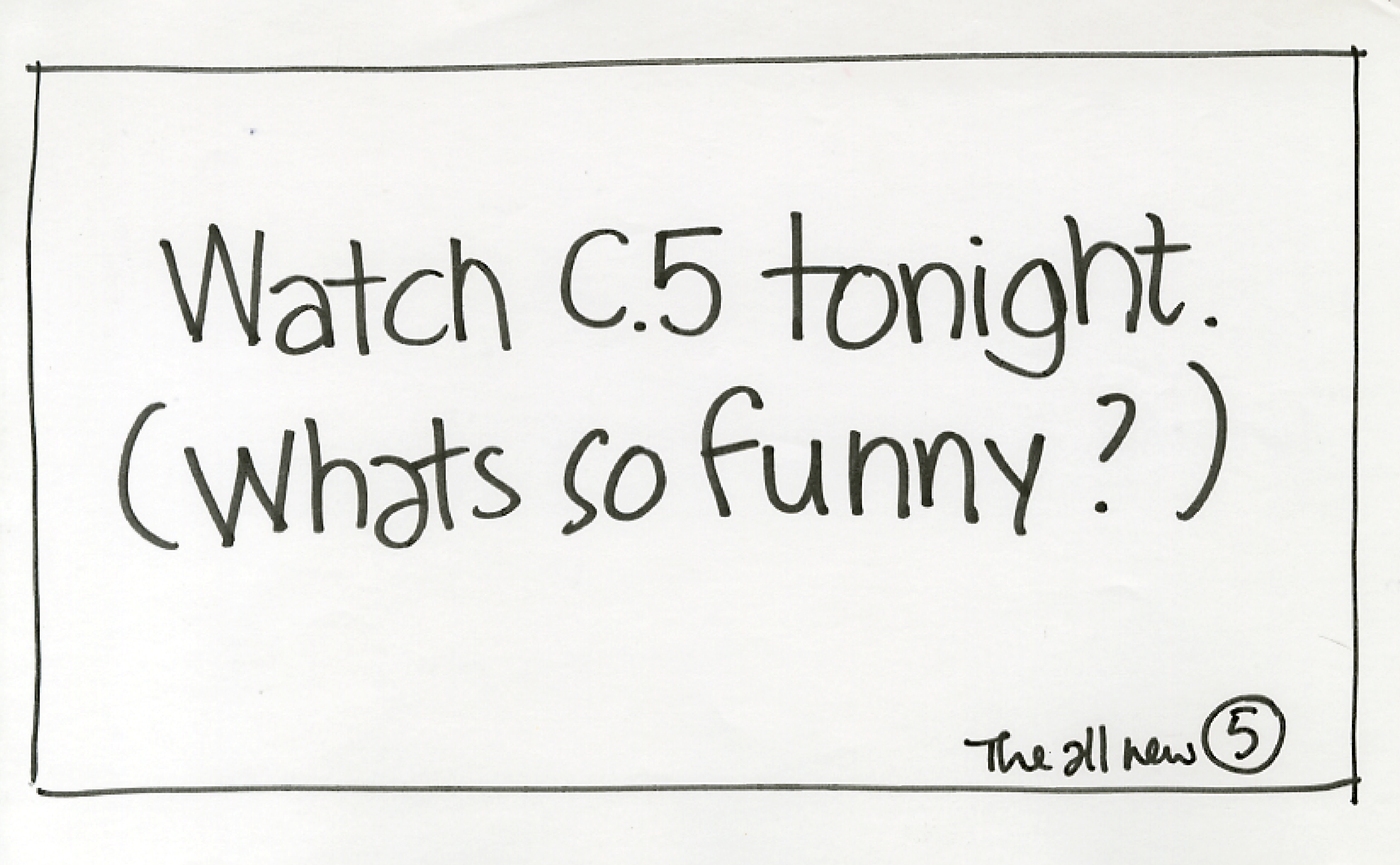 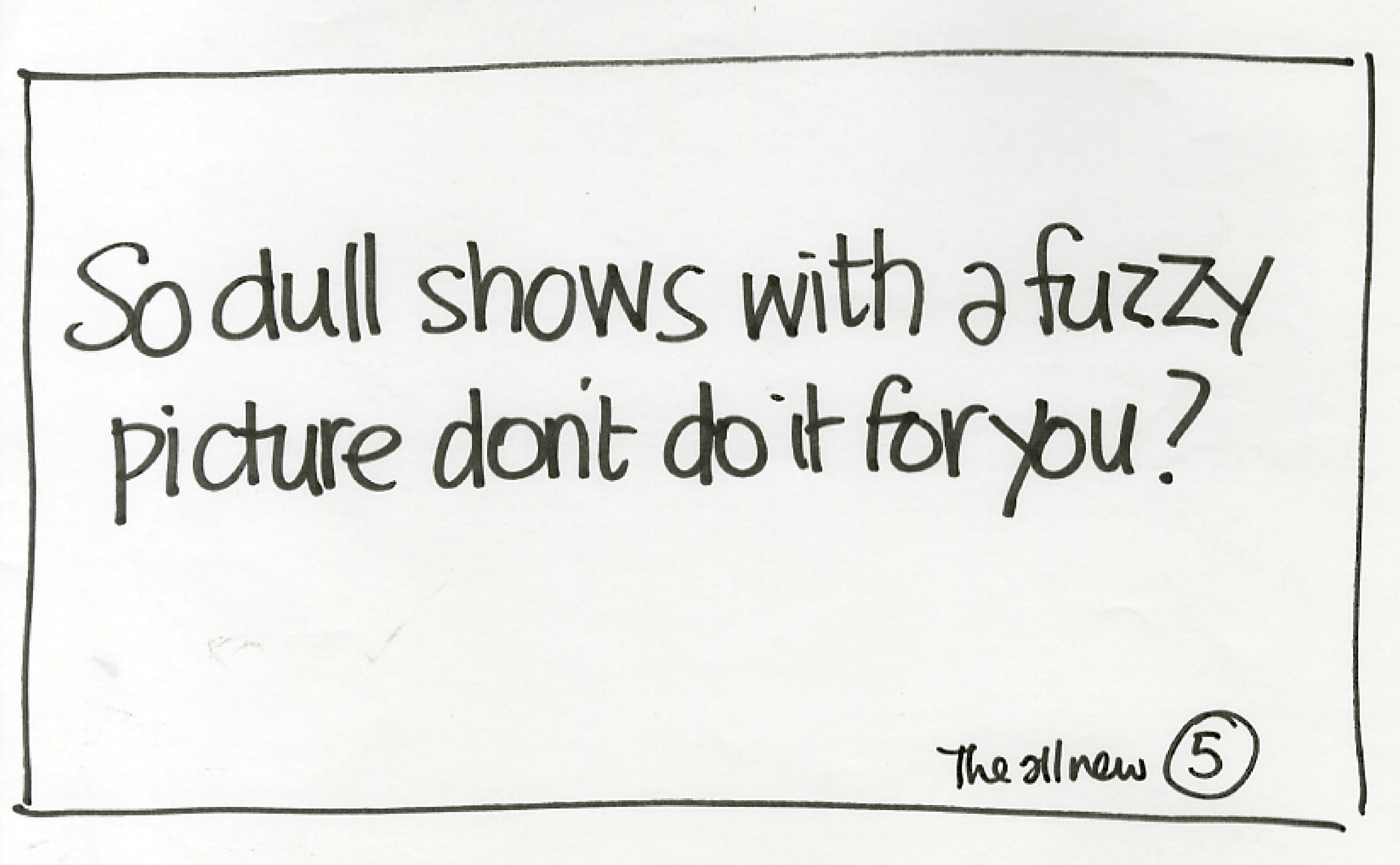 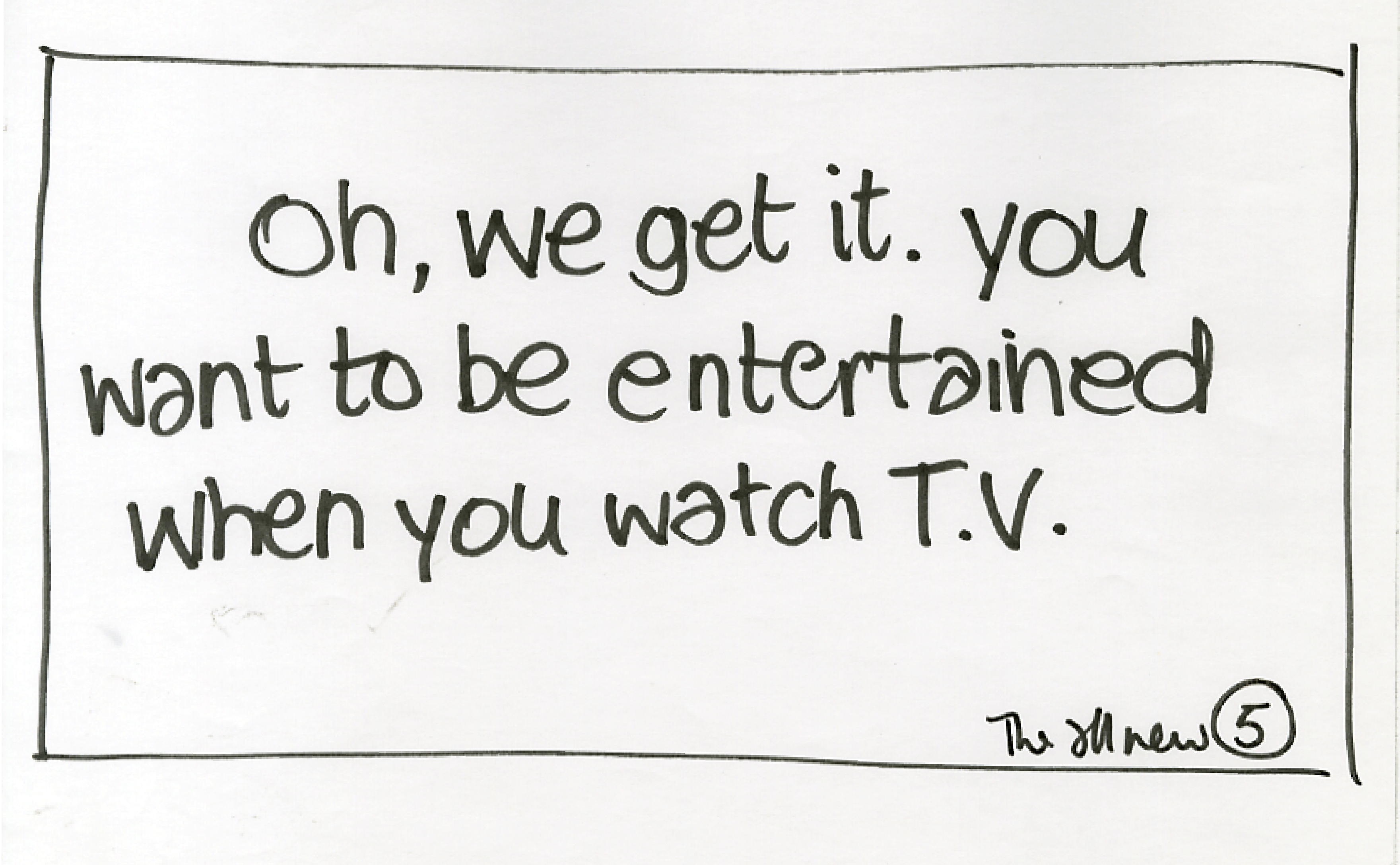 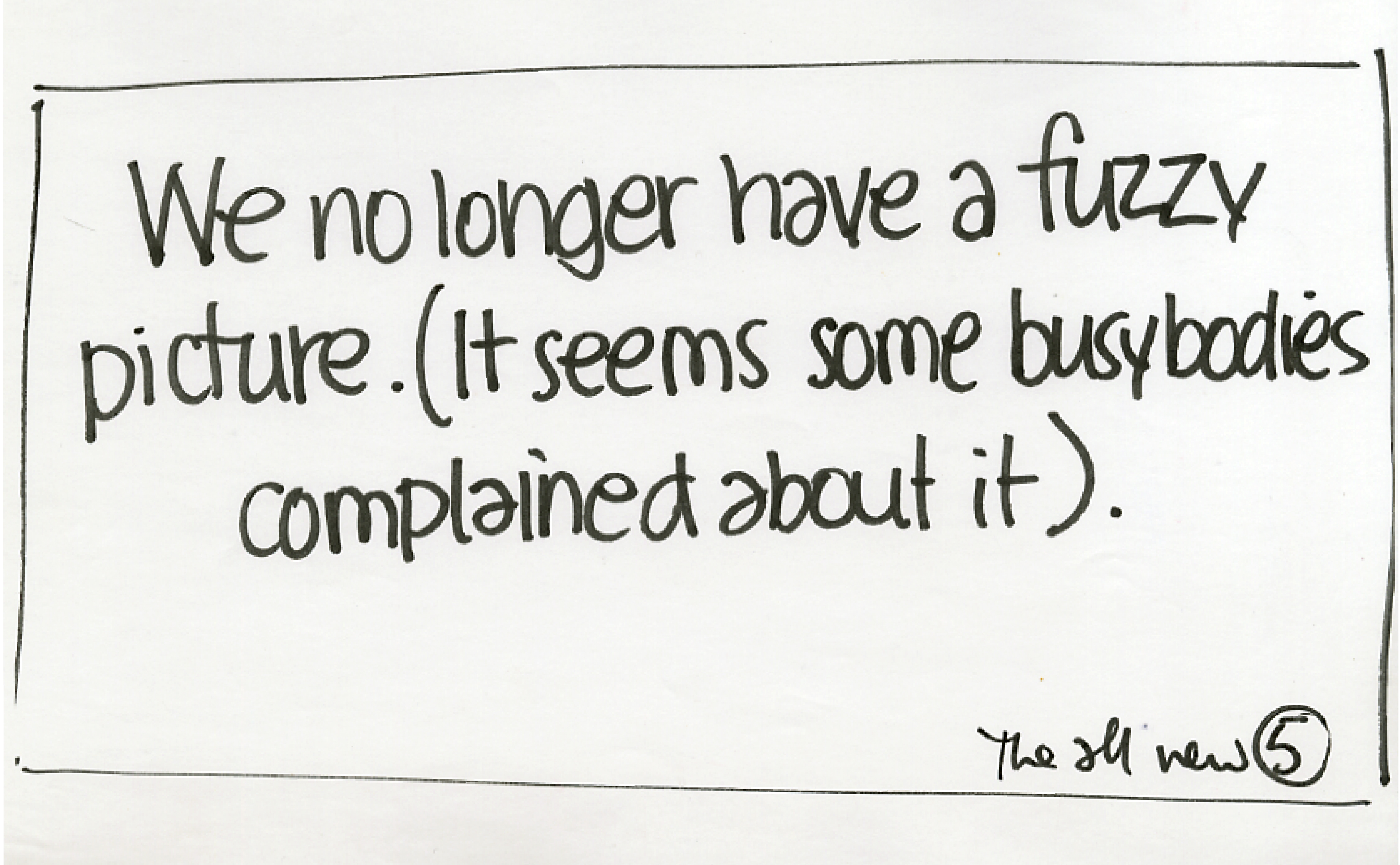 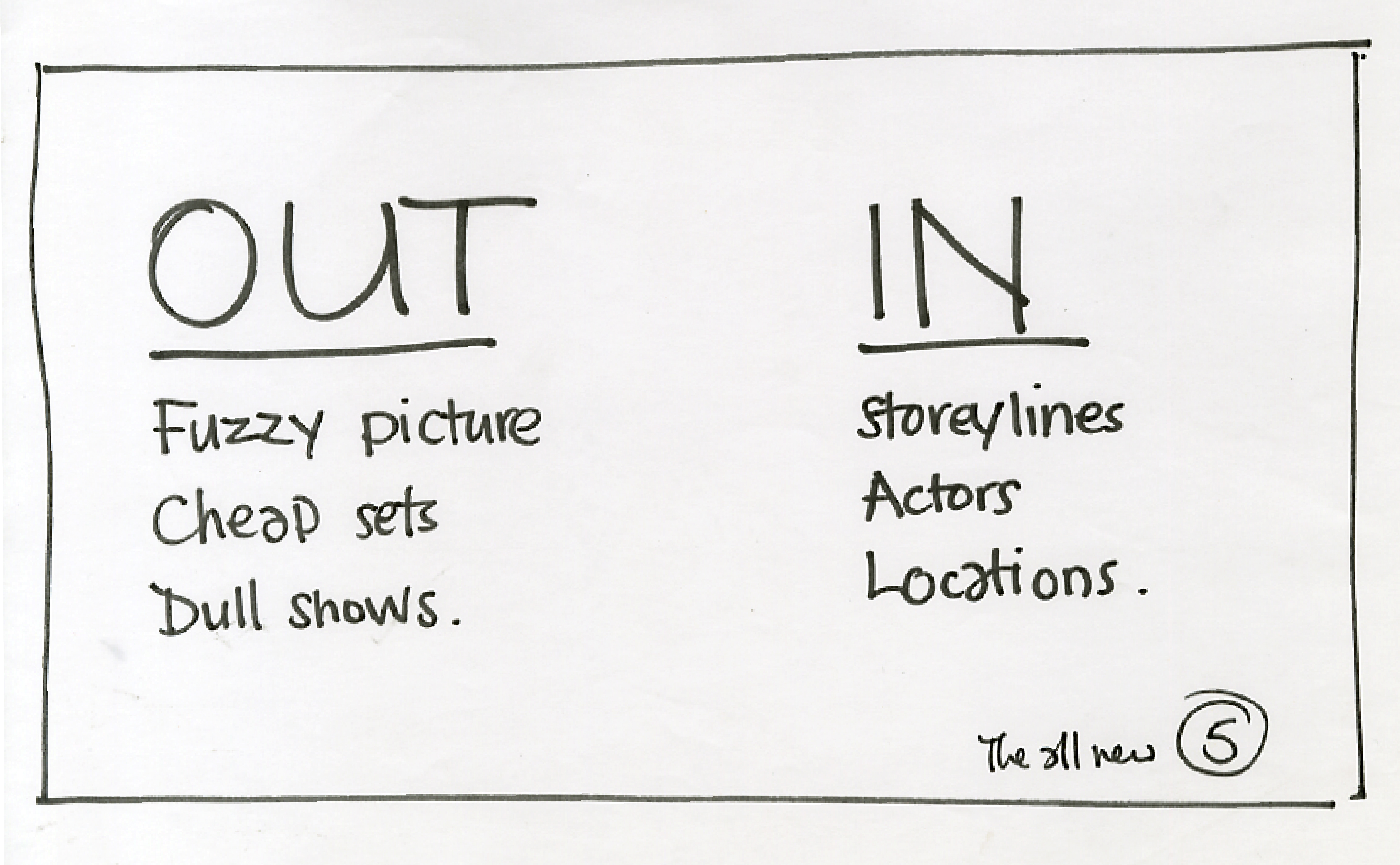 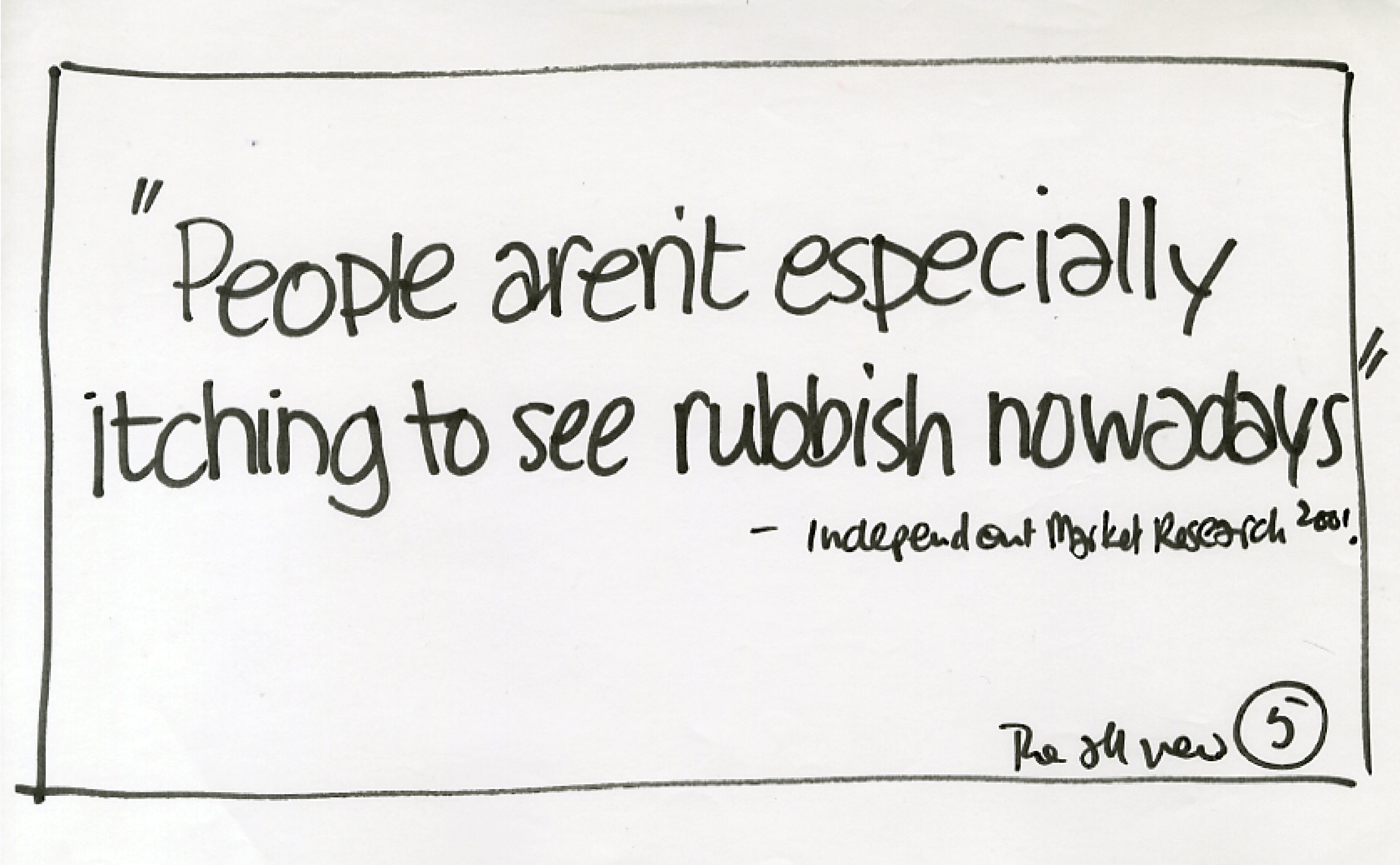 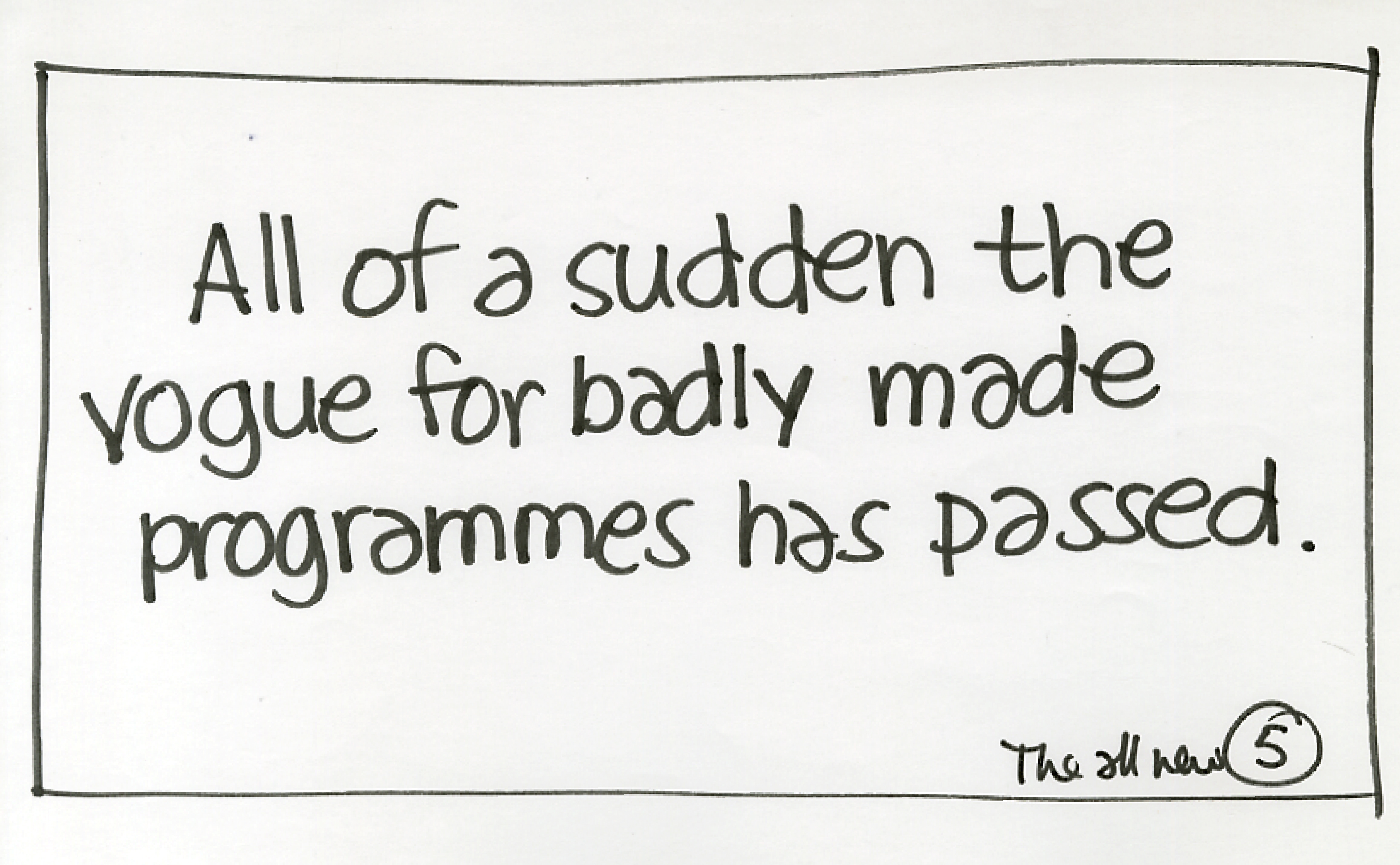 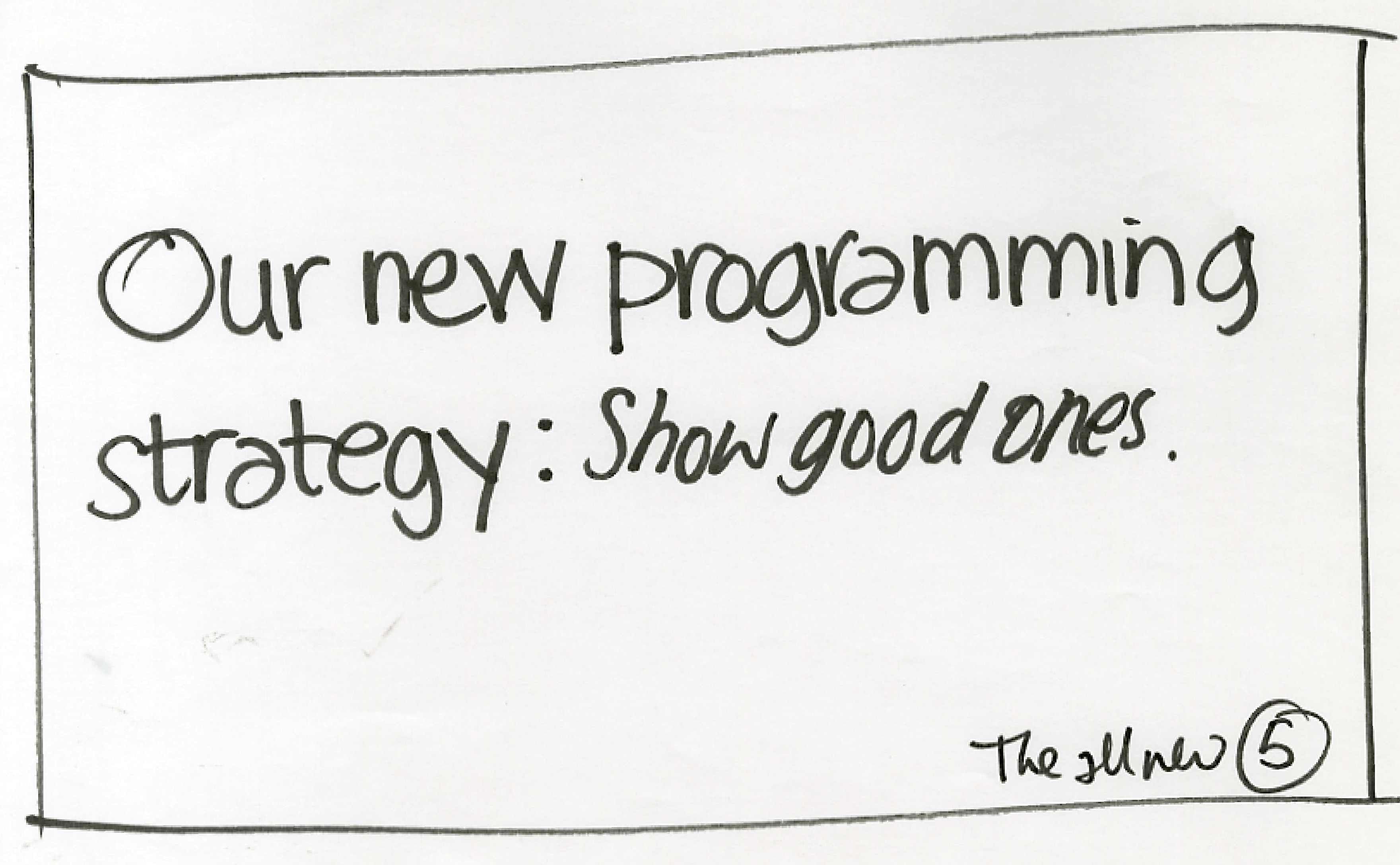 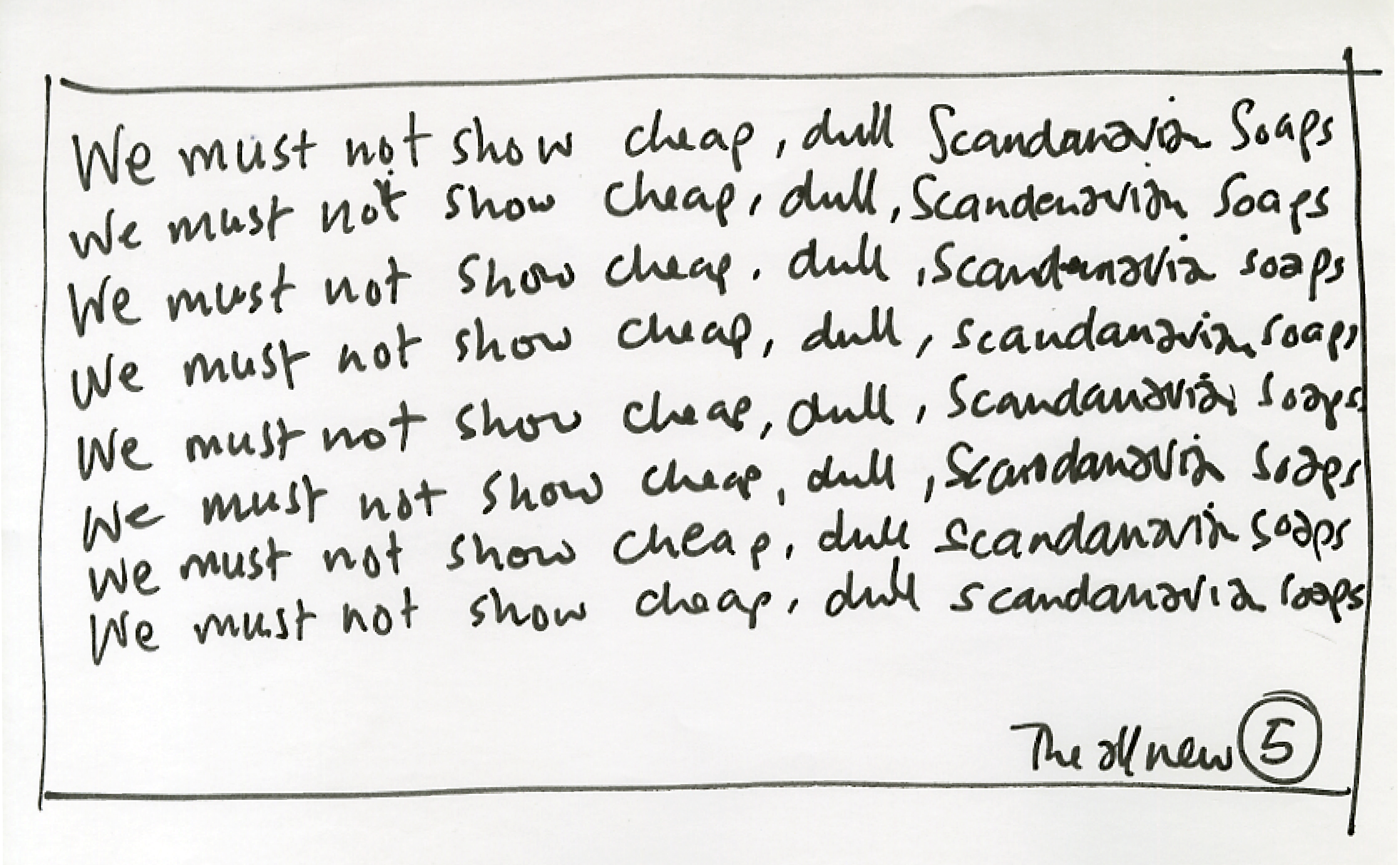 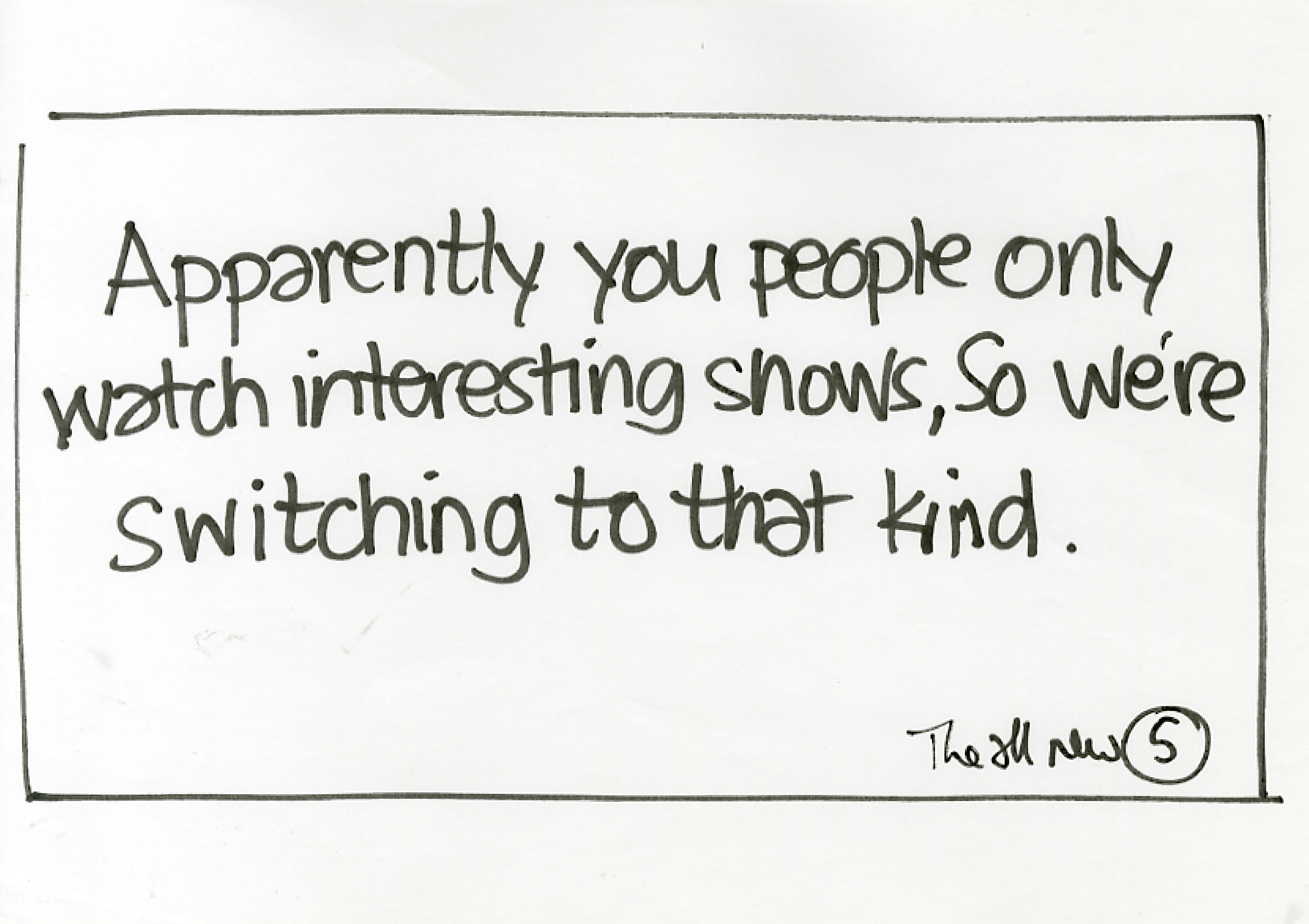 ‘It wasn’t what we were expecting’ said the guys from Channel 5.
‘We know, exciting isn’t it?’ we said.
‘Er… yeah…could we take copies of the ads back to the office?’
Great we thought, they obviously like them so much they want to show the guys back at the ranch.
In retrospect, they probably wanted proof of what had just happened.
We didn’t get that account.
Channel 5 ran some ads saying they were amazing.
(Nobody believed them, their share didn’t rise.)
A few years later, a new Channel 5 Marketing Director chanced upon the ads we’d written.
She was tickled, called us to put us straight onto their new pitch to change their perception.