Full disclosure; it’s actually the 113th.
But I noticed that when blogs or podcasts hit a significant number they do a kind of round-up, like a kind of house-keeping thing, so here’s mine.

1. BLOGS HAVE A LIFE OF THEIR OWN.
MAY 2002: My friend Paul buys me davedye.com.
OCT 2013: I decide to bung all my old work on it, for easy access.
NOV 2013: It’s a bit chaotic. Having presented the work in various creds meetings, I figure I may as well write down what happened with each campaign, the brief, the changes, etc.
FEB 2014: I wonder why there isn’t there any of Tom McElligott’s work on the net? I write a post on him to introduce him to people who may not know him.
(The first of 8 ‘Hands Up Who’s Heard Of’ posts.)
MARCH 2014: Damn! It seems I didn’t give Pat Burnham enough credit in the Tom McElligott post, how can I make amends? Interview him!
(The first of 35 interviews.)
SEPT 2016: It takes me 10 hours to transcribe an interview I’d recorded with Joe Sedelmaier, Joe’s answers are great, but it doesn’t feel as accurate as hearing him laugh, swear or curse. Maybe I should’ve just put out the recording.
JAN 2017: I put out first podcast; Tom McElligott.
(18 podcasts recorded to date, 8 yet to be posted.)

2. POSTS CAN HAVE UNEXPECTED CONSEQUENCES.
A few months after I did the post on Tom McElligott, Bob Barrie sent me this: 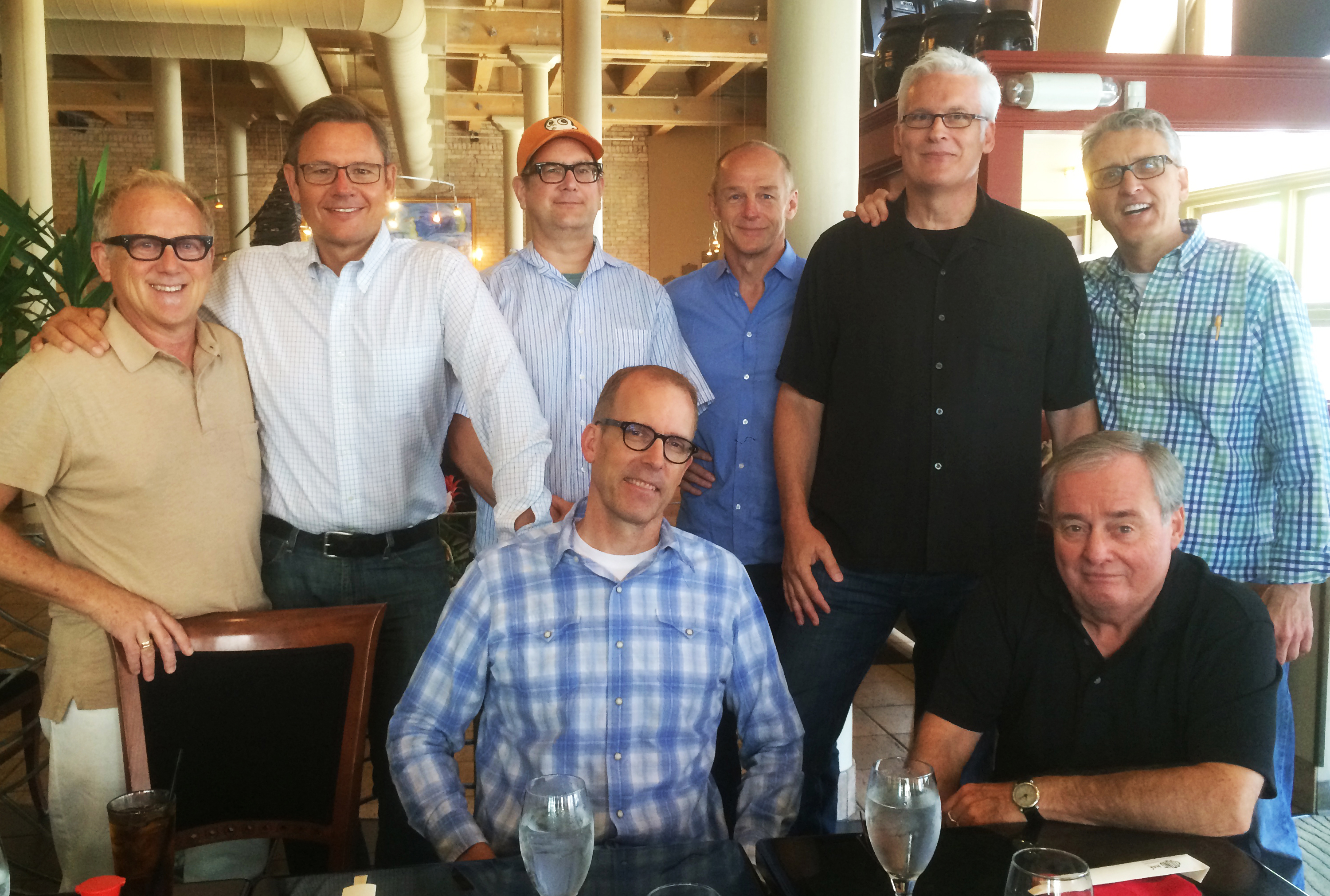 Standing left to right are Mark Johnson, Mike Lescarbeau, Jarl Olsen, Dean Hanson, Bob Barrie and Tom Lichtenheld. Bruce Bildsten and Pat Burnham are seated.
They’re a large chunk of the Fallon McElligott Rice Creative Department, circa 1985.
He said my posts on Tom and Pat Burnham had led them to get the old gang together for a reunion in Minneapolis, some hadn’t seen each other in a decades, Tom Lichtenheld flew in from Chicago and Jarl Olsen flew in from San Francisco.

They’re part of the tools you get with WordPress, they help you see a post is performing globally, the problem is, if you’re a curious type like me, they get you thinking:
Not much colour in Russia, how do I reach more Russians?
How do I make Asia more orange?
Why are the coloured areas primarily English-speaking countries when Google could translate it for the others at a flick of a button?
After a while the curiosity will fades when it dawns on you that you didn’t start blogging to make friends in the Ukraine and have no idea how to reach them anyway.

4. PEOPLE PREFER TEXTING, EMAILING, DIRECT MESSAGING, PHONE-CALLING, VIRTUALLY ANYTHING TO ‘COMMENTING’.
My blog is hosted by WordPress and shared with Facebook, Twitter and LinkedIn, Google+ and Tumblr, each have their own comments section.
Some are posted there, but most are posted via phone, email or whatever.
It’s a shame they can’t be aggregated and viewed by everyone in one place, because most of them really add something to the post, particularly those on individuals, the interviews and podcasts.
I was going to attach a recent favourite comment* to this bit, so I searched through ‘Mark Reddy: Podcast’ on Facebook, WordPress, Twitter and LinkedIn, as if to prove the point perfectly; I couldn’t find it.
(*It was something like ‘Mark speaks so softly, it’s as if he’s near a sleeping child, traumatised child’.)

5. NUMBERS ARE HARD TO PREDICT.
Posts that take an hour can get three times the views of those that take months.
A perfect example are the two Tom McElligott posts.

a) ‘Hands Up Who’s Heard Of Tom McElligott?’.
Essentially a bunch of scans and screen grabs plus a bit of text by me,
I probably spent five hours on it.
(https://davedye.com/2014/02/07/hands-up-whos-heard-of-tom-mcelligott/)

b) ‘PODCAST: Tom McElligott’.
After the first post a lot of Tom’s old creative department emailed to say thanks.
Many asked whether I knew where Tom was.
After leaving Fallon’s with alcohol issues, he spent less than a year running Chiat Day New York, then set up McElligott Wright Morrison White, only to close it two years later.
Not only had he not been heard from him since, no-one knew where he was.
As I started doing more interviews I thought it would be great to interview Tom, so I began making calls and emailing.
‘He was last spotted in Hawaii’, ‘I think he works at Minneassota Art College’, ‘Isn’t he in New York?’.
All leads eventually dried up.
Cut to two years later: I get an email from a young creative asking for a book crit, (he said his Dad told him to ask me).
When he turned up I noticed two things: he was American and his surname was ‘Hanson’; ‘You’re not Dean Hanson’s son are you?’.
He was.
I told him his Dad had done some great work and some of it was on a blog about his old boss I’d posted.
He said he’d seen it.
‘Your Dad’s not in touch with Tom is he?’.
‘No.’
Of course not. Another dead-end.
Damn! That’s that then.
Cut to three months later: I get an email ‘My Dad said try this number’.
I didn’t know what he meant as the email said no more than that.
A few days later, before I’d had a chance to phone this long shot, Pat Fallon died.
I put off phoning the number, on the off-chance that it was Tom’s, I thought it’d look like my call was linked to Pat Fallon’s death, like I’ve just remembered him after the death of his old partner.
I wrote the phone number in a notebook and put it to one side.
A few months later I remembered it.
I dialed the number, the fact that he’d disappeared, had a drink issue and didn’t seem to want to talk to anyone anymore made me apprehensive.
No answer.
I tried intermittently over the next month or so, nothing.
I had another go: ‘Hello?’.
Rather than being the angry, miserable aggressive guy I feared might answer the phone, he couldn’t have been friendlier and more cheery, he seemed to me like the Jimmy Stewart’s character* in ‘It’s A Wonderful Life’.
(*If you’ve seen the film, I’m talking about the Jimmy Stewart at the beginning or end, not the one in the middle).
After a series of calls and emails Tom agreed to be interviewed.
He wasn’t being difficult, he just didn’t know what a blog or podcast was.
Sometimes I wouldn’t get a response to an email, the following week Tom would say ‘Oh, sorry, I didn’t look at my computer last week’.
Eventually a date to record was agreed.
I turned up at Wave, dialed  him in, his wife apologetically informed us he was still at the dentists.
We rescheduled.
Finally, we recorded, 2 hours and 45 minutes.
He couldn’t have been lovelier, more candid or happier; ‘Ask me what you want, I haven’t spoken to anyone in the last 25 years, I don’t plan on speaking to anyone in the next 25’.
It’s difficult to estimate the hours it took to get there, if I said it took five times as long as the previous post I’d be massively underestimating, but if I said it took more I’d start questioning what I’m doing with my life.

So, here are the numbers for each:

The first one got about 38,000 views when it was posted in 2014, the majority in the first month.
The second has got roughly 2,800 views to this point, 9 months into 2017. (Weirdly, the first one has been viewed more in the last six months than the podcast; 4,300 views.)
Why are the first numbers are so high and the second’s numbers so low?
I get to the same place as I do with the maps; I’m interested in the numbers but not driven by them, I’m driven by curiosity, I got to ask Tom McElligott every question I could think of for nearly three hours.

5. HUMOUR DOESN’T ALWAYS TRAVEL WELL.
I don’t know whether it’s a British thing, an irony thing or a me thing, but often the intent doesn’t transfer.

Eg 2: I found a picture of Gerry Graf standing next to a very old guy and couldn’t resist putting the pink spot on the guy next to Gerry.

So far four people have told me that they were surprised how old Gerry was, ‘especially given that his work is so fresh’.

Eg 3: Researching Dave Trott I found out that the first ad he got into D&AD was credited like this: 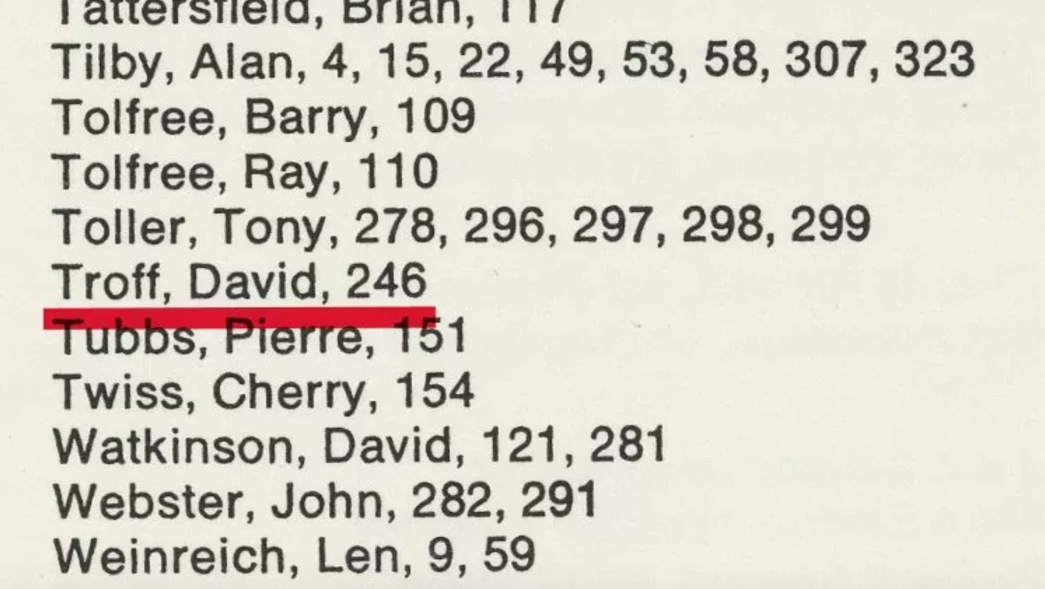 6. NEVER PUT OUT A PODCAST OUT WITHOUT EDITING.
It sounded like such a good idea.
a) You put out a real, warts ‘n’ all genuine conversation.
b) You don’t have to listen to yourself wang on for three hours and worry about how you sound.
c) You save time.
Three minutes of dead air in the Peter Souter episode changed my views. (We went for a pee.)
There’s another benefit to editing, it’s allowed me to capture and weed various slips of the tongue; someone slagging off their current boss, another criticising their friend, one even said ‘advertising isn’t as good as it used to be’, nobody wants to go on the record saying that out loud, so he asked for that to be taken out.
(After a while spent wrestling with RSS feeds, the podcasts are finally up on iTunes: https://itunes.apple.com/us/podcast/stuff-from-the-loft-creativity/id1265125334?mt=2) 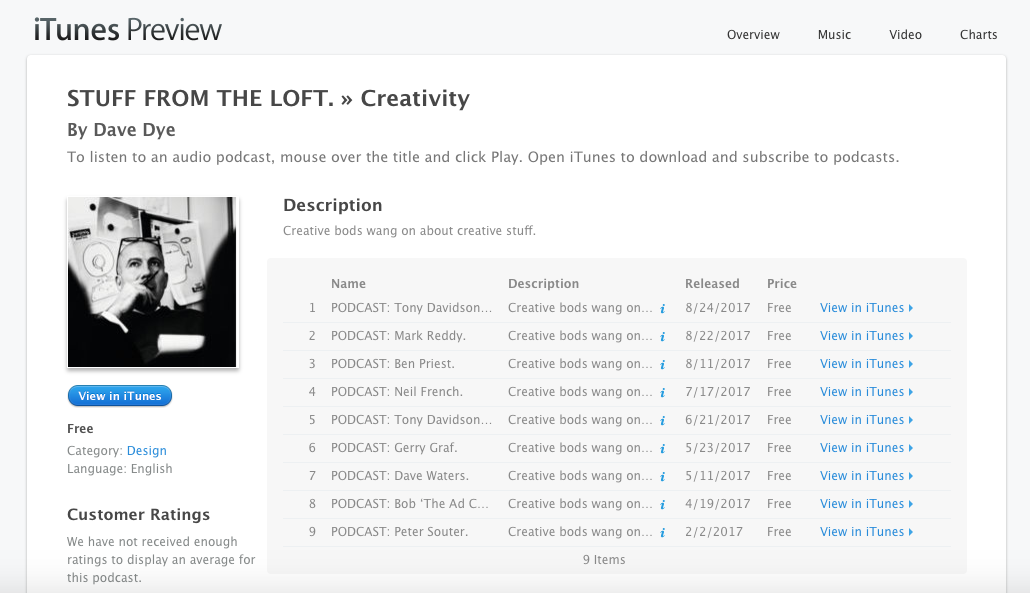 7. SCRATCH YOUR ITCHES.
A lot of posts start with Google searches, I’ll look for a particular reference and won’t be able to find it, along the way I’ll discover there’s barely any work of Tom McElligott’s, Alan David Tu, Howard Zieff, Jeff Stark’s or whoever.
Irritated at this slap in the face for creative people who should be better known, I’ll try to change that situation with a blog post.
I remember Lester Bookbinder being the most stylish photographer from my early days in the business.
He was the kind of photographer I could never have worked with at the time, he was crazily expensive and super picky about who and what he worked on.
A Sarson’s Vinegar layout from a 23 year old art director at Cromer Titterton was never going to break through that wall.
He was truly world-class, just below Irving Penn, (like everyone else).
He was one of the busiest, most admired photographers from the fifties to the nineties, working for agencies and magazines across globe.
He must’ve shot tens of thousands of images over those fifty years, less than a dozen images would show up on Google.
That just doesn’t seem right.
It’s a bit like finding out that Tarrantino shot a film between ‘Reservoir Dogs’ and ‘Pulp Fiction’ that didn’t get released or that Lennon & McCartney recorded a bunch of demos in the spring of ’79 that have just been sitting on a shelf for years.
You’d have to look for the bootlegs, wouldn’t yo?
Personally, they are itches I’d have to scratch.
Lester Bookbinder’s lost work was another itch.
Searching for Lester’s work lead me from tiny black and white picture of a Management Today cover in a 1968 D&AD Annual to Haymarket’s archives in Twickenham in the hope I’d find and scan a few covers that may not have been seen.
I discovered and scanned 45 magnificent covers, here’s one of my favourites. 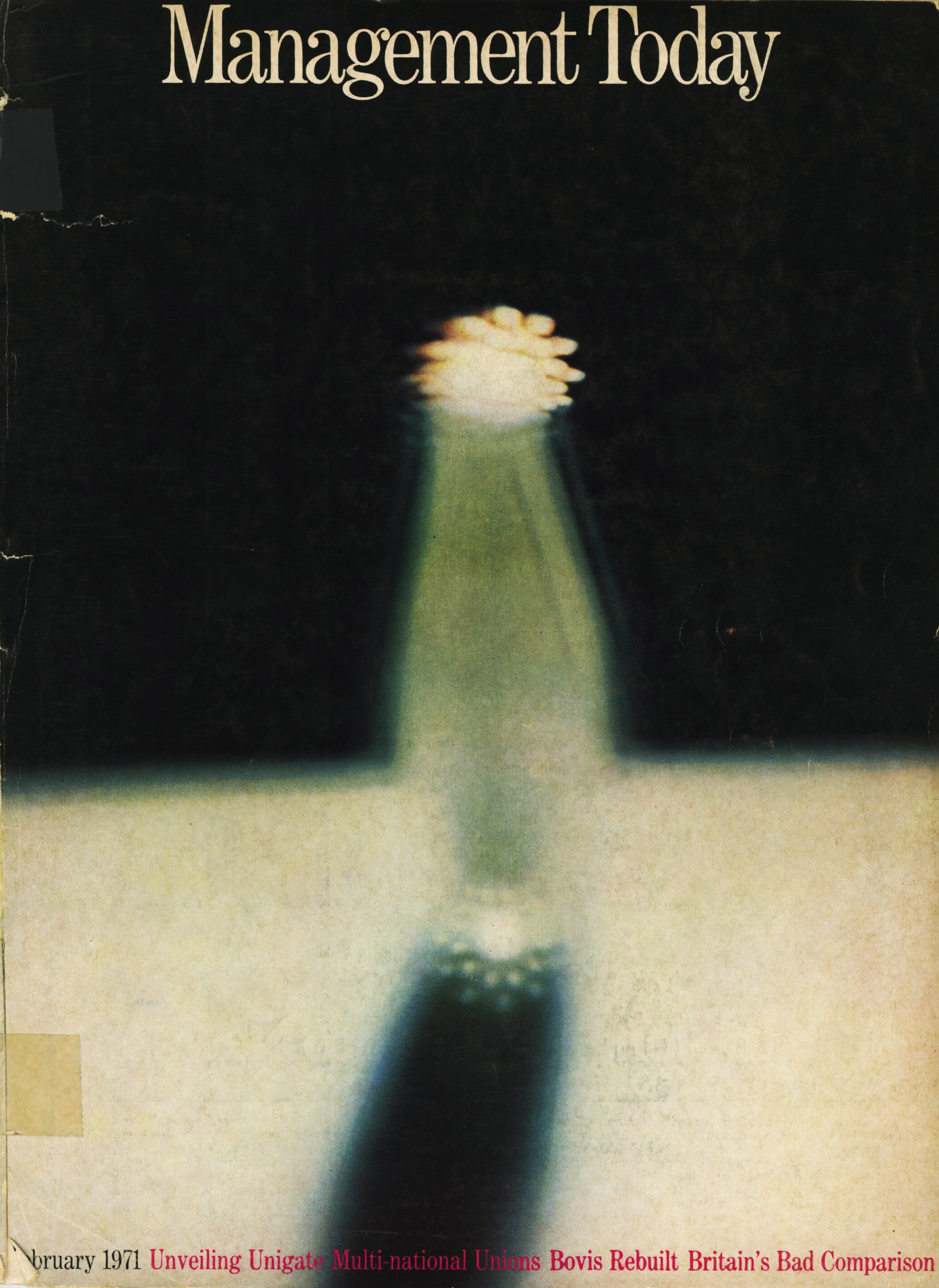 The covers stimulated everyone from Nadav Kander to Tony Kaye to comment how amazing Lester’s covers looked today.
(https://davedye.com/2015/07/16/lester-bookbinder-1-the-management-today-covers/ )

9. BE FRIENDS WITH THE PEOPLE WHO OWN THE BEST SOUND STUDIO AROUND.
Obviously it’s a big ask, but it really helps.
So thanks again Parv, Wazza, Harry, Aaron, Jenn, Rebecca and the good folks at Wave.
(http://www.wavestudios.co.uk/) 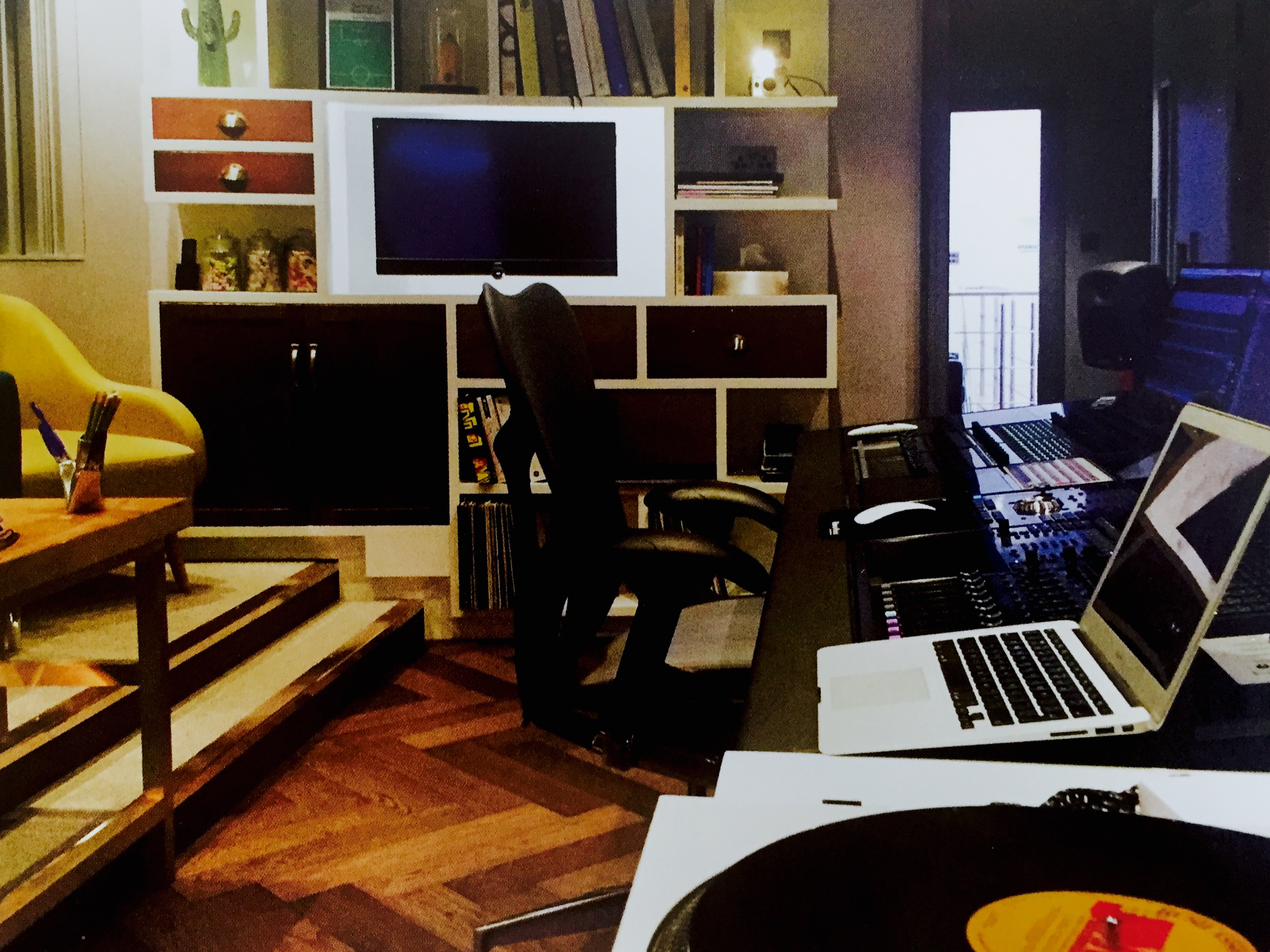 10. NEVER MAKE A TOP 9, IT SOUNDS SILLY.
While I’ve got you, you don’t have Charles Saatchi’s email address do you?