A lot of people have suggested that I do a podcast on myself.
Aside from the obvious difficulties of trying to ask yourself probing questions, it
felt a little bit indulgent, particularly as I did a whole series of them with my friend Ben Kay, (I think we recorded more episodes than the latest season of Game Of Thrones).
But when someone who’s kindly agreed to be interviewed by me asks me to be interviewed by them, it feels rude to say no.
Especially when it’s Ben Priest.
So here goes.

Ben was a man after my own heart, he wanted to see absolutely everything.
Sadly for Ben, I sent him absolutely everything, (nearly a terabyte’s worth of ads, pitches, rejects, scans and all manner of ephemera from the last thirty years).
I also found being the victim was educational.
I learned that I prefer asking to answering questions.
When you are asking you are driving the bus, when you’re sitting in the opposite chair you’re the passenger, you go where you’re driven, sometimes places you don’t like.
I also discovered that putting out old, rejected, sometimes bad work isn’t as easy as I thought it was.
I always insist on interviewees digging up ‘their whole journey’, because it’s truthful and educational, but when it’s your bad work it’s harder.
(But I did it, don’t worry, there’s a lot of crap included.)

So, thanks again Ben.
Oh, and good luck with your new life, I hope Lawn Green Bowling and doing the bingo on Mediterranean Sea Cruises brings you as fulfilment as advertising has.
Dx

p.s. I’ve tried to dump as much ephemera as I could find in this post, not because it’s particularly fascinating, more because it allows me to believe it was worth holding onto.

STUDENT.
(Or, to be precise; unemployed )

I’d send these ads, hand drawn in A4 envelopes to any company that appeared to be remotely creative; ad agencies, design companies, illustrators agents, etc.
I was clueless.

The responses were surprisingly consistent.

Rejections were replaced by invitations to come in and chat.
Exactly the same work, different cover note.

BROOKS LEGON BLOOMFIELD.
The letter lead to an interview that lead to me being offered a bit of ‘work experience’, placements weren’t a thing in those days.
During the two weeks, I worked on a brief for some ideas for Media Week article; ‘What kind of ads will Vets do if the law changes and allows them to advertise?’.

The Creative Director, Barry Brooks liked my ideas and presented them on to the magazine.
One was printed in the magazine, Barry let me stay another month.

In that month I wrote a commercial for a pink gunge called Hippopotamousse.
I say wrote, I drew a storyboard full of images of hippos synchronised swimming, directly ripped off Disney’s Fantasia.
It got made, and got me an a three month extension.
Unfortunately, all I have is this cell from the animators; Pizzazz!

I spent three months working on trade ads, house ads and anything else the proper creatives didn’t want to do.

A bad idea executed badly.
Everything is drawn except the cutlery.
When I put it together the Account Man, Ken McCrea, said ‘you should leave the edges in, where the painting stops, otherwise you won’t know it’s painted’.
I ignored him, thinking it looked scruffy. 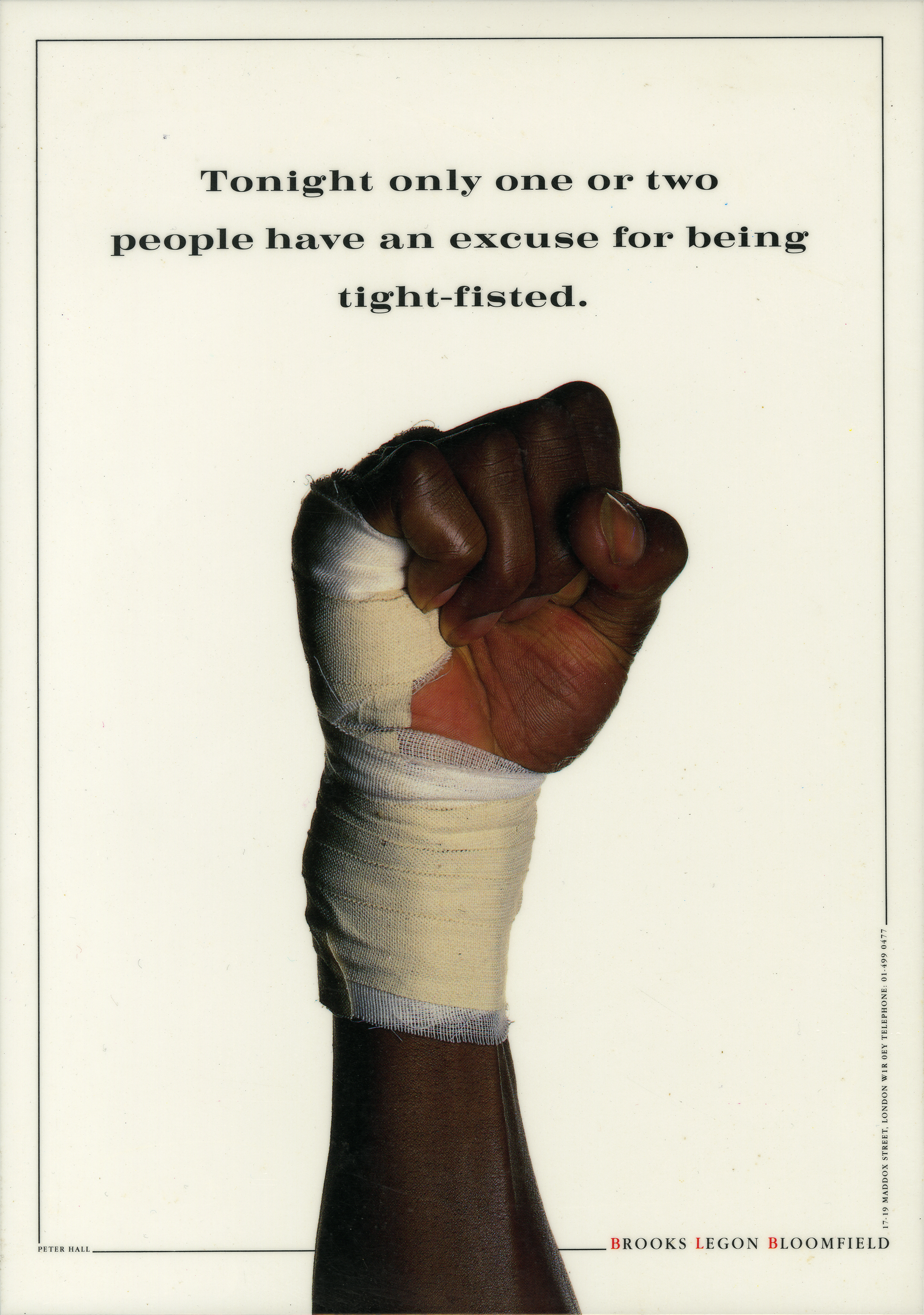 ELGIE STEWART SMITH.
After three years of BLB I was fired.
I camped out at a new agency set up by a guy who said I had potential, Brian Stewart.
Whilst working in the loft of of their Noho town house, Barry Smith and Brian presented a poster I’d written that I really liked.
Good news: The Observer bought it.
Bad news: As a radio ad.

It turned out to be a blessing in disguise; it got into that years D&AD Annual, (1989), my first ever award.

Three months after being fired by BLB, I was offered a job by GGT exile and Milk Chocolate heir Jan Van Mesdag.
Brian Stewart had recommended I team up with a writer called Alastair Wood, so I did. Because we’d combined our books, and Alastair’s was better than mine, I was paid nearly double what I’d been paid only three months earlier.

We did a few Creative Circle Bronze winning ads and tried to get briefs for free jobs that allowed us a bit more creative freedom.

First Alastair was fired, then a couple of months later I followed him out of the door.
(Jan, what happened?)

EDWARDS MARTIN THORNTON.
I was reunited with my old BLB writer Kieron Simpson, sadly no longer with us, my Creative Director was John Hegarty’s long-term writer at Saatchi’s and then TBWA, Chris Martin, a lovely, talented guy.

PUBLICIS.
Well, Publicis International, a big difference at the time, it was the Rolla Cola to the main agency’s Coca Cola.
I’d hooked up with a great new writer, Mike McKenna, but the creatives in the main agency wouldn’t talk to us, we were in the ‘International Boys’, we were on the floor below working on accounts like Intel, Dim and Dan Air.
An IPA poster Mike and I had done got into the D&AD Annual a month after we’d joined, maybe those creatives on the floor above will accept us now?
No.

I did the campaign below with art director Derrick Hass and then model-maker, now world famous artist Ron Mueck. (I bet it’s not on his site today?)

Eventually, Mike and I got merged into the main Creative Department, allowing us to work on a wider range of briefs.

In an effort to win awards and get noticed by the agencies we really wanted to work at, we offered our services free to anyone who’d give us a free hand.

This little freebie job got us a Gold at Cannes, although in those days a gold at Cannes was less preferable than a bronze at Creative Circle. Really.

DFSD BOZELL.
A good step up, I also got to work for Brian Stewart again who I’d known from Elgie Stewart Smith, a great, under-recognised art director, who’d helped me out a lot.

Two months in I get a call from the best agency in town.
It was difficult, I’d only been there 3 months, Brian had personally twisted arms to get me and Mike there, I felt guilty resigning and for leaving Mike.
Brian insisted I write a list of the two agencies pros and cons, which we’d discuss over the road at the pub.
In truth, there was a gulf between the two agencies, but guilt made me present it as a closer call.

SIMONS PALMER DENTON CLEMMOW & JOHNSON.
Mark Denton told me it was all the extra curricular activities Mike and I had done that had got me the job. (Good lesson there.)

After a year Chris Palmer and Mark Denton were fired.
Tony Barry had just resigned to Tim Delaney to come to Simons Palmer to work with me.
Not knowing what was happening post Chris and Mark, and feeling miffed that they’d taken my great bosses away, I suggested we go there instead.
Tony talked to Tim, a meeting was arranged, Tm offered me a job.
It all felt a bit informal, so I asked Tim whether there was any paperwork or proof I had a job, he laughed incredulously, picked up a piece of paper on his desk and scribbled this.

LEAGAS DELANEY.
I went through a lot of writers there.
(Which, in retrospect, was great, you learn a lot from each partner you work with; the way they think, they way they were trained at their last agencies and you get a whole new batch of film, music and cultural references.)
I spent the first year with Tony.

I also worked on my own for a while.

I then got together with Sean Doyle, who I’d spent the next ten years and three agencies with.

I was made Head of Art.
A big change, instead of competing with the Creative Department you’re helping them, you have to give away everything. 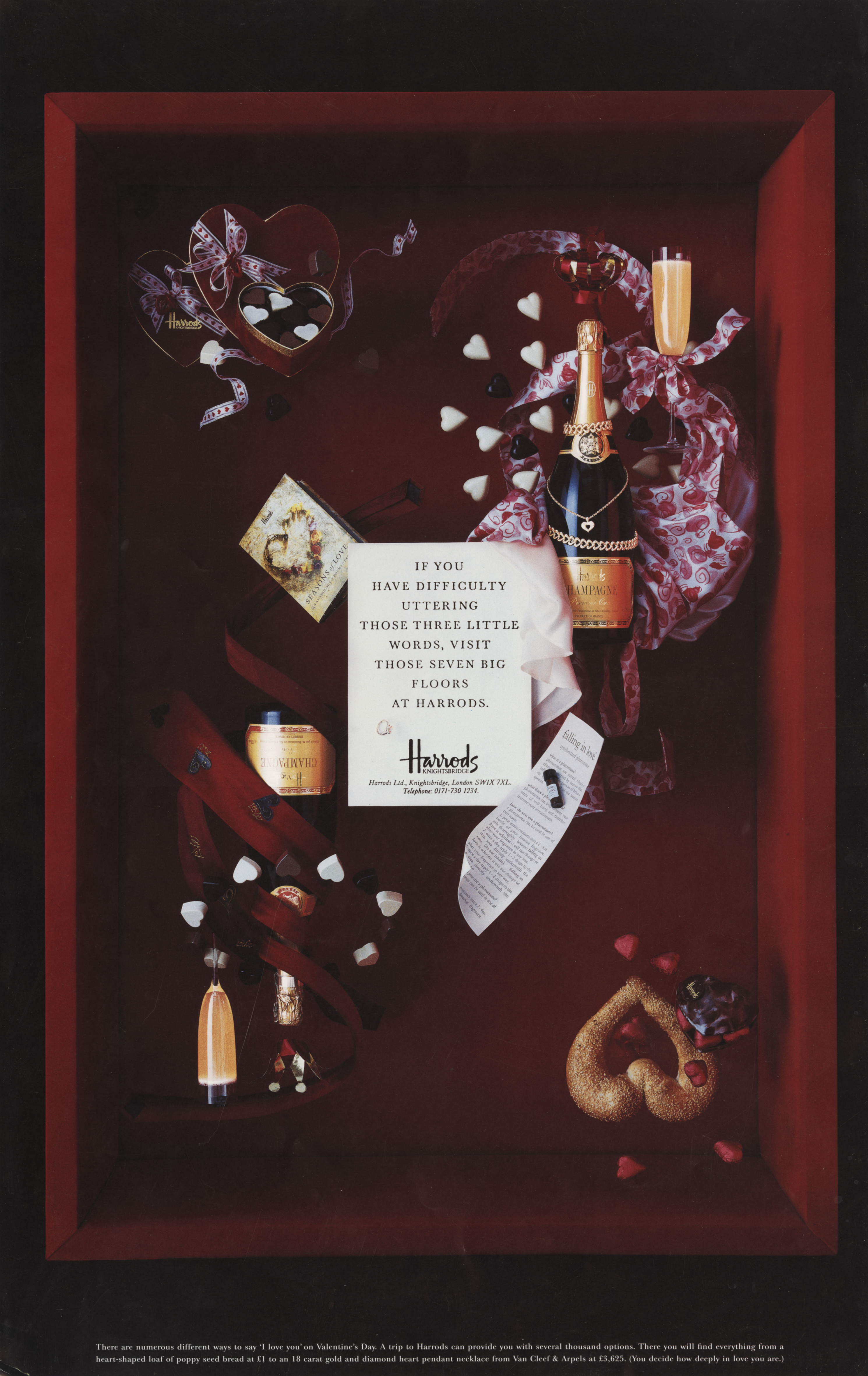 One of my favourite VW ads we did there was this one.

It got into The One Show, but some well-meaning administrator obviously thought the slide had been put in back to front, so they corrected it for publication.
This is how it appeared in that years annual.
People must’ve thought ‘I don’t see what’s clever about that, bloody judges give it the benefit of the doubt because it’s got aVW logo on it!’.