I’m not a big fan of ‘BRAND PURPOSE’.
It seems to replace specific reasons for buying a product with generic claims that aren’t even specific to the product category, let alone the product.
It leads companies to make claims that make them seem nuts.
Charcoal insoles that ‘stop sneakers from smelling’ get elevated to ‘Creators of a nose-friendly planet’.
If you can’t say it to someones face without feeling embarrassed, don’t say it.
‘DISRUPTION’ is another popular word.
But it’s a $10 word for ‘different’.
‘Different’ gets noticed, a huge part of advertising, also, I get why TBWA rebranded the word to ‘disruption’, it’s been good for them, but it’s spin, it’s part of the job, not THE job.
(It’s also generally the executional part of the job).
‘STORYTELLING’ is another.
It just seems so indulgent, I might decide to buy a pint of beer because the brewery was set up by three ambidextrous vets from Nantwich, but equally, it could be it because it was cheap, had a nice bottle or because it tastes nice.
I’m not against ‘disruption’, ‘brand purpose’, ‘storytelling’ or any number of these $10 words currently doing the rounds, but they aren’t the answer, they’re an answer; different tools in the toolbox.
On the front of that box is the word ‘selling’.
I know, I know, such a coarse word.
We avert our eyes from it the same way we do when looking at the sun, preferring to look to the sides.
Is it too basic? Too low rent? Not intelligent sounding enough?
Who knows?
We’re allowed to reframe in more flattering, more high-brow terms because we’re not at the sharp end, we’re insulated from the harsh financial realities of by layers and layers of people.
Consequently a layer of space junk has built up around the world of advertising that’s obscuring the very point of it; communicating to the public on behalf of businesses to sell their stuff.
It’s a proper job, it can be amazing, creative and fun.

I’ve been thinking about putting a post together on these basics; getting attention, making a message simpler and more engaging.
I thought I’d choose the most basic, amoeba-like form of advertising to show how a bit of creative discipline can help.
Maybe a ‘guitar lessons’ ad from a news agents window or a ‘Lost dog’ poster from a tree?
For example, a ‘Lost dog’ poster would be if it was more specific and said ‘Lost Labrador’, it may be improved again by making it more emotional ‘Lost Labrador, answers to ‘Eric’, and so on.
But I didn’t get around to it.

Then, whilst waiting for my flat white to be made, I spotted these: 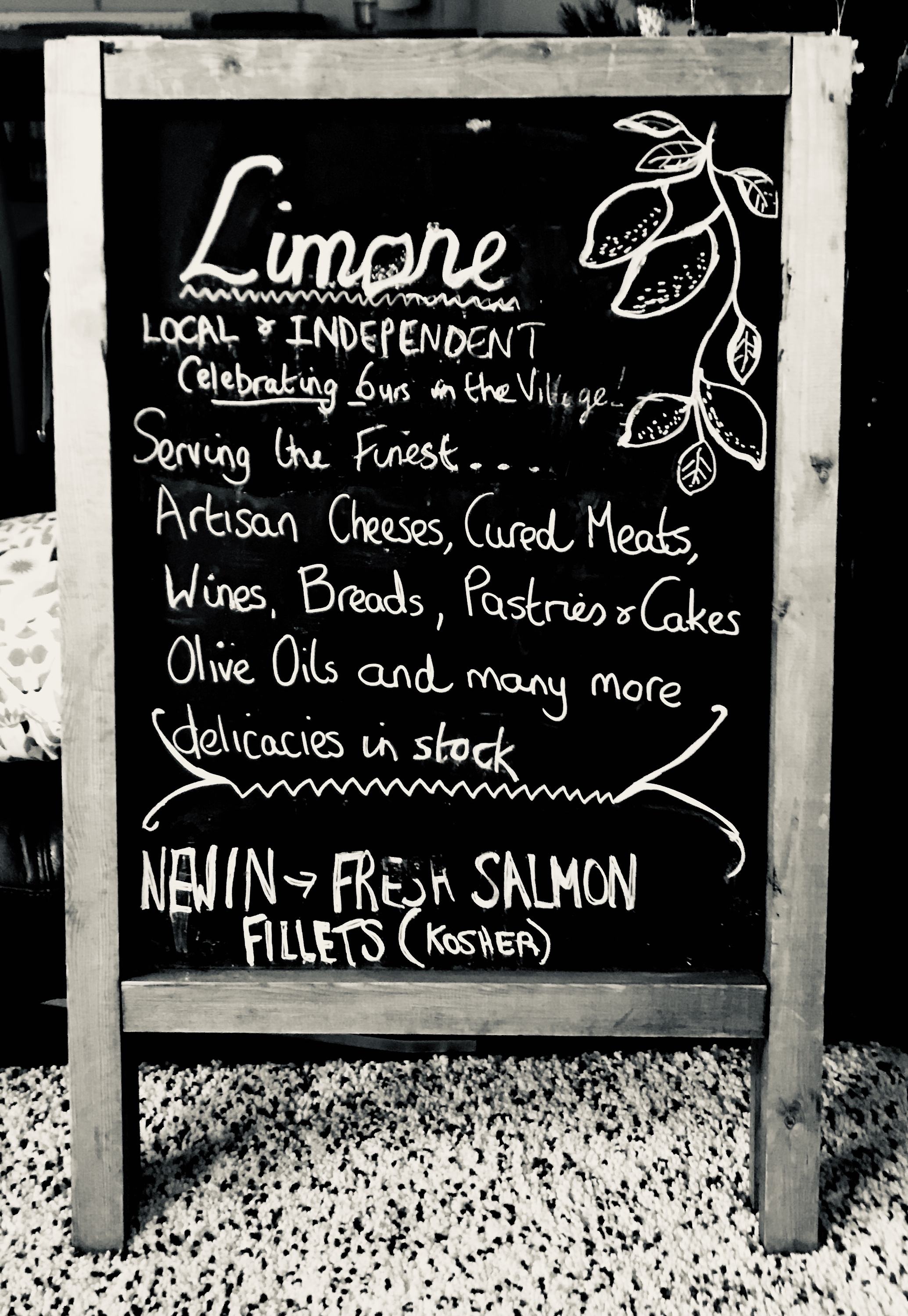 ‘Jesus! Who could be arsed to read all those little words?’.
Perfect! Rather than deconstruct something in theory, maybe I can construct something in reality?
I pitch the owner; Emine, the idea of trying to drum up more business via her A-boards.
She says yes, I will refer to her from now on as ‘the client’.
I like the fact that there’s nowhere to hide, it’ll either make a difference or not.
Also, maybe I’ll learn something.

Ok, so here we go…
What’s our media?
Two black & white A Boards, (4 sides in total).
Do we hammer one message 4 times or have four messages?
We’ve got a pretty captive audience; they will pass our ads repeatedly, so let’s start with 4 separate executions.
People see them on the move, walking past, so like posters, the number one issue is to stop them.
So we have to be simple, use bigger words and/be unusual, (or ‘disruptive’ as they’d say over at TBWA towers).

What can we learn from the previous work? 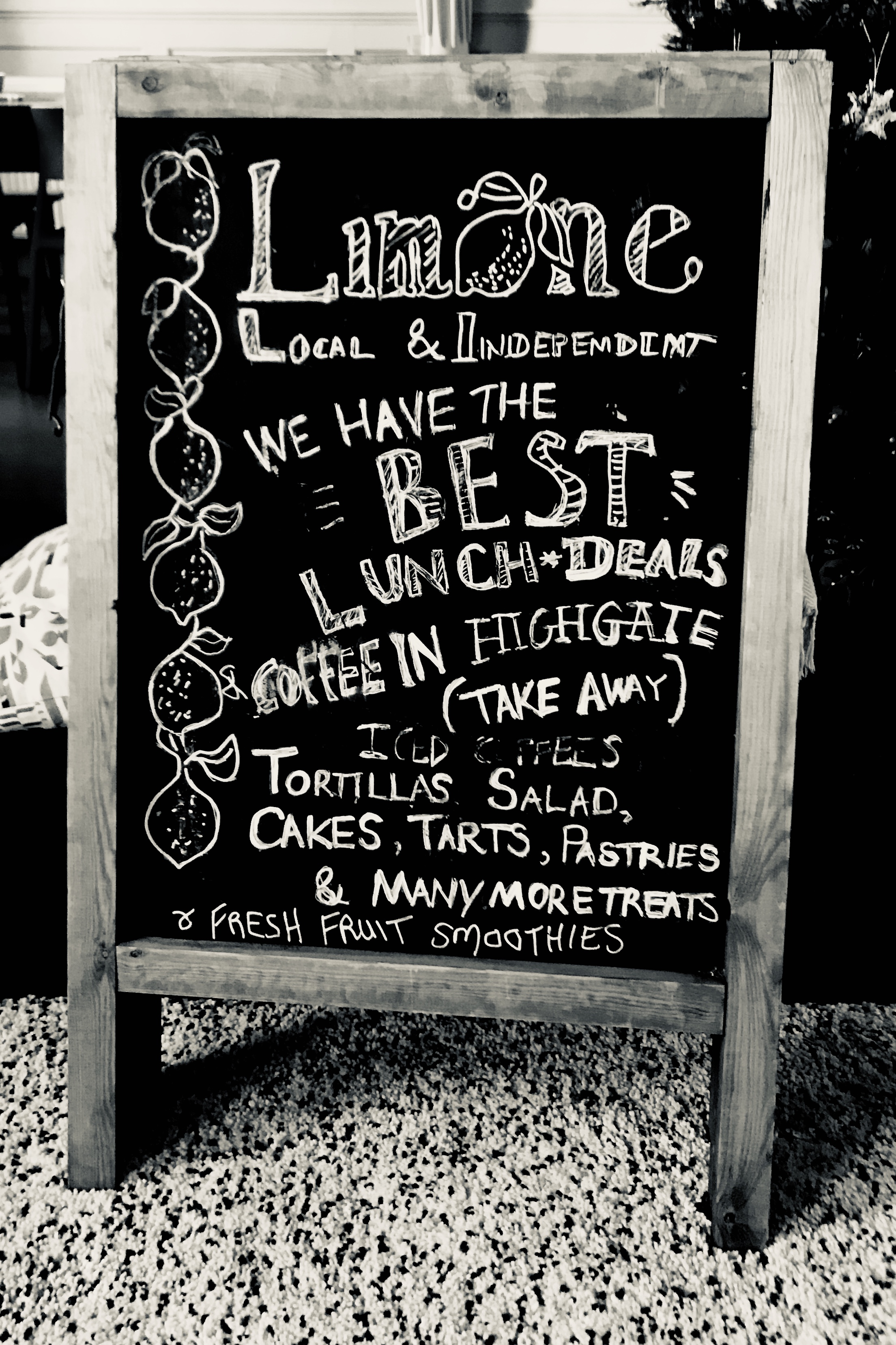 Firstly, there are far too many points being made.
That not only makes it hard for people to focus on each message, it means the words have to be very small, making them harder to read and less likely to get noticed.
So what can we lose?
THE LOGO?
The board is placed outside the shop, I think people will connect the two, so that can go for a start.
THE BRANDING?
Or ‘Lemons’ as they’re sometimes called. They’re not doing any heavy lifting, they can go.
‘CELEBRATING 6 YEARS IN THE VILLAGE’?
100 years might be worth shouting about, but six? Gone.
‘LOCAL & INDEPENDENT’?
Well, it’s obviously local, I’m standing here looking at it, that’s a point that doesn’t need making.
‘Independent’ seems like a good thing to push, there’s been an explosion of corporate coffee shops, there seems to be a trend towards all things bespoke, unique and quirky, whatever the category.
‘SERVING THE FINEST…ARTISAN CHEESES, CURED MEATS, WINES, BREADS, PASTRIES & CAKES AND MANY MORE DELICACIES IN STOCK.’?
Maybe we tackle them one by one, I’ve forgotten about ‘artisan cheeses’ by the time I’ve read ‘delicacies’, although that could just be me.
‘NEW IN – FRESH SALMON FILLETS (KOSHER).’?
I like that, the very specific item, it forces you to consider whether you are interested in salmon fillets…or not.
I also like the fact that they are kosher, not because I like kosher salmon fillets but because it’s a very niche product, it makes me think that this deli may stock other very niche products that may surprise me.
Products I may not be able to buy elsewhere.

So what should our messages be?
1. COFFEE.
It’s an everyday purchase, there are six other coffee shops in the village, so there must be a lot of local coffee drinkers locally, let’s try to flag them down.
2. CHEESE.
Feels like it could be a small impulse purchase,
3. BRAND.
This is a fancy deli Highgate, not Tesco’s.
We are not offering everyday value, we sell fancy things that are quite dear. Let’s be true to who we are.
4. TOPICAL.
Static isn’t a good look for any brand or company, it’s always good to appear current, evolving and moving forward, so maybe we could use one board for this?
We could pick up on the calendar, Christmas, Easter, or whatever, we could reference the news or ‘Kosher Salmon Fillets – in stock until Weds’.

How do we speak?
We’re independent, so whatever corporate-speak is, we should be the opposite.
Also, we’re talking latte and dolcelatte, not life and death, so let’s be fun and cheeky.

WEEK 1:
CHEESE: They’re the only deli for about 4 miles. 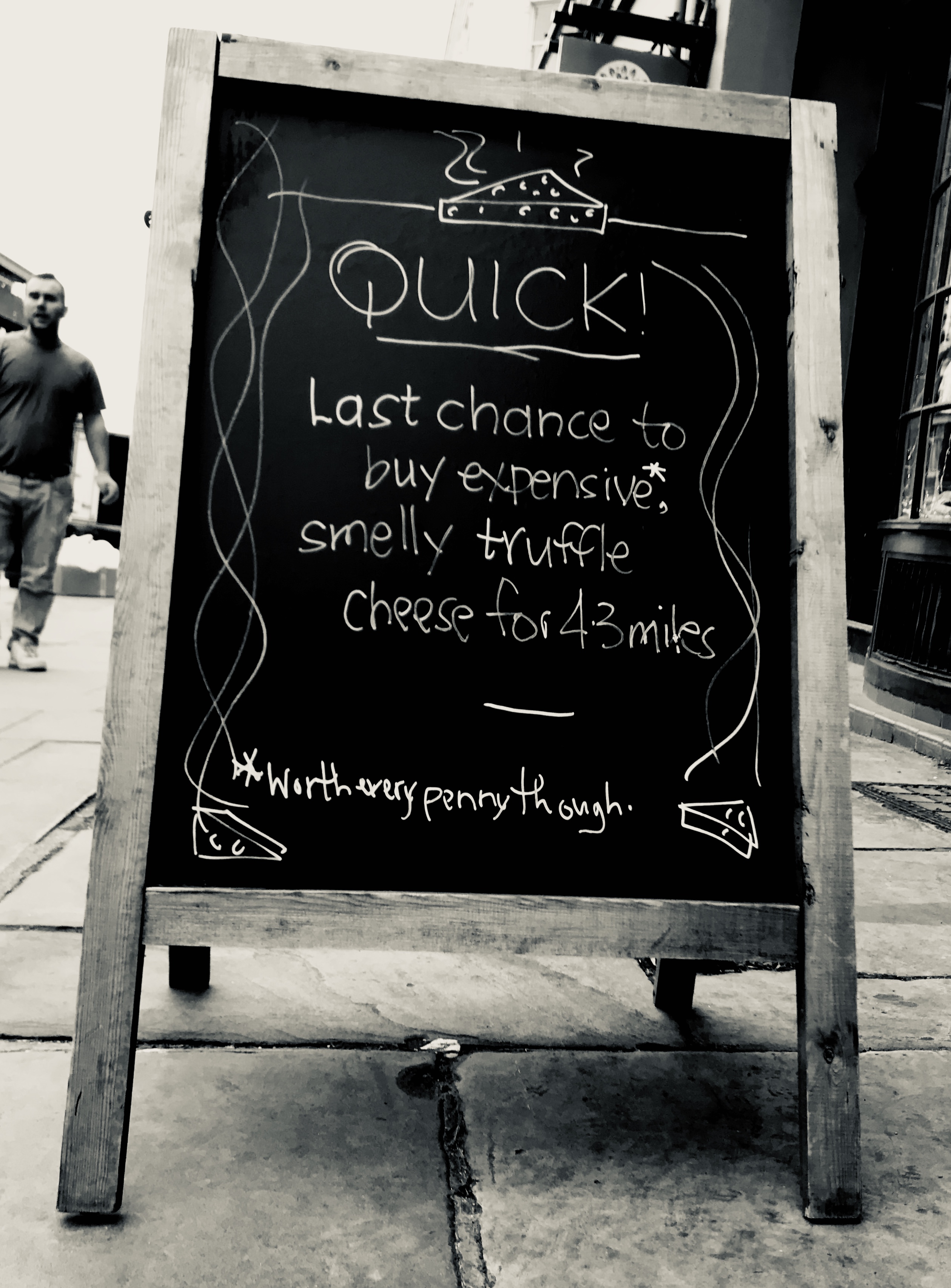 BRAND: Let’s say ‘We’re independent’. Saying we’re not one of the chains sounds pious and off-putting, ‘Our coffee is better than coffee chain coffee’ sounds like bullshit, probably because it is? Also, the Costa mob up the hill might put a brick through our window.
We just need to signal we are different from them because we’re independent. 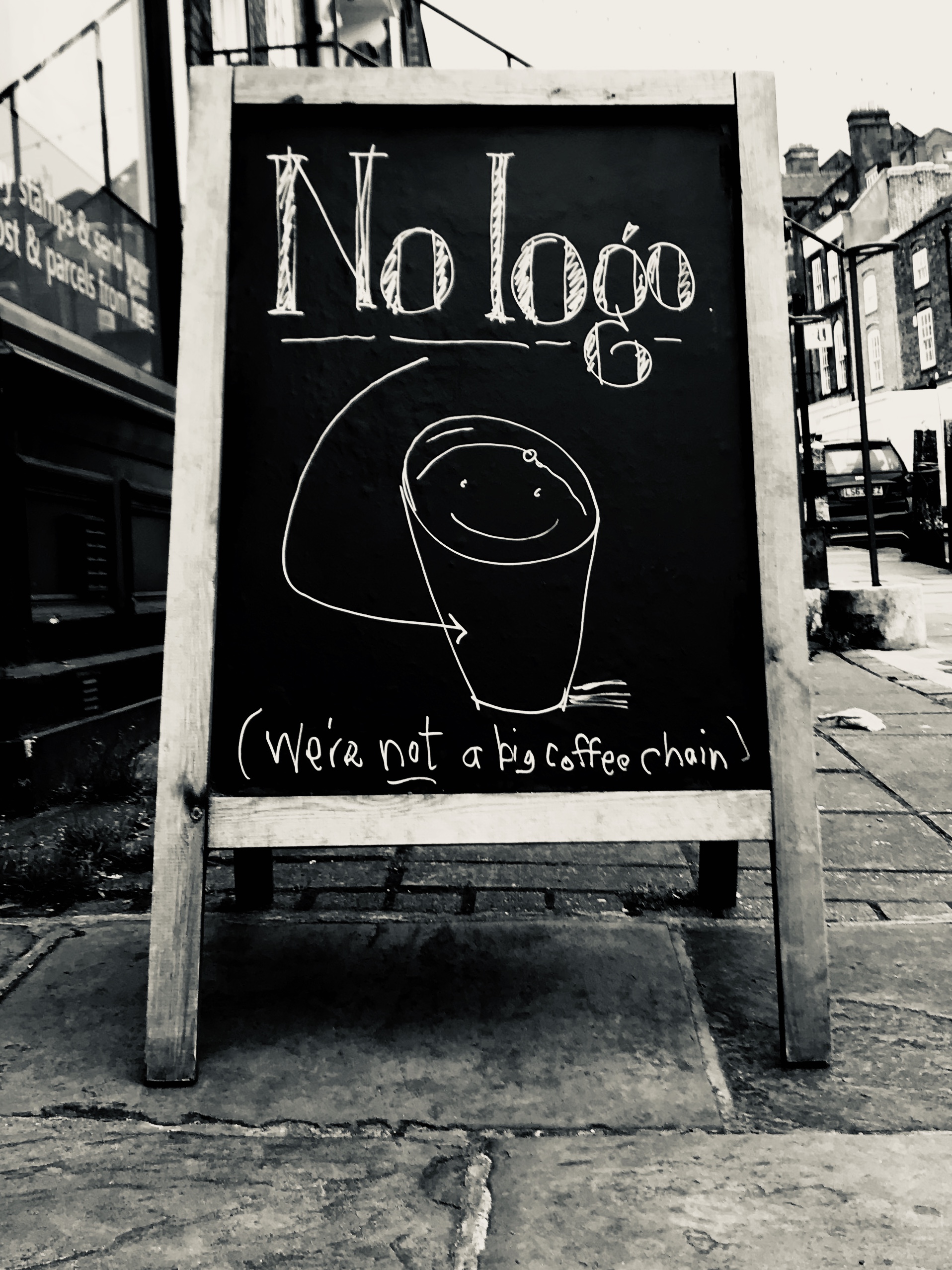 TACTICAL: Try selling a Christmas Hamper after December 24th plus they are a big ticket item.
Maybe they’re Christmas presents? For late present buyers, or ‘men’ as they are more commonly known. 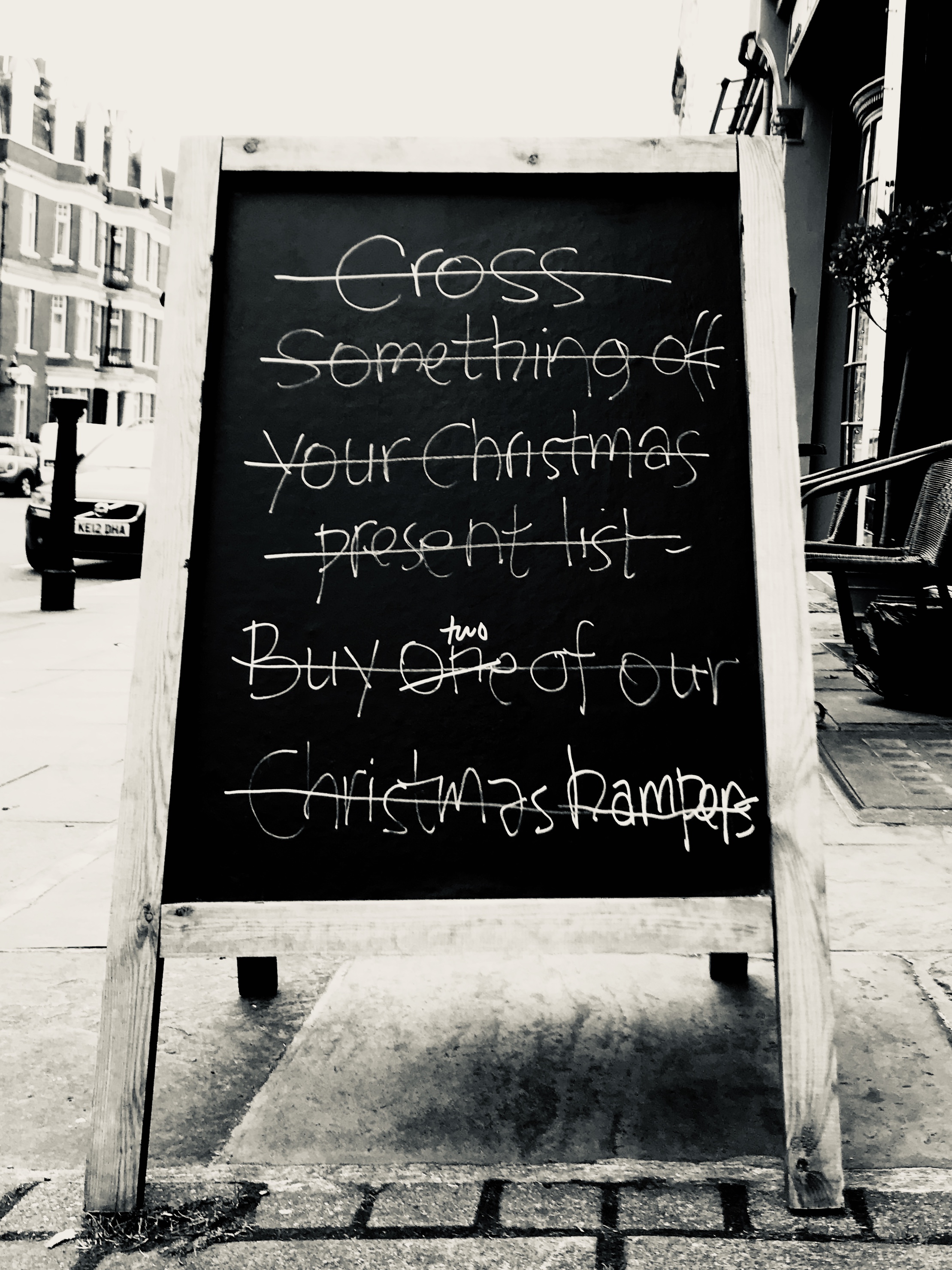 LOCATION: Everyday, at 8.30 and 3 the streets are flooded with Lycra-clad mums dropping or picking up their girls from Channing’s School.
Let’s ask them if they want a coffee.
It’s better if we are specific, what coffee would they drink? Skinny latte? 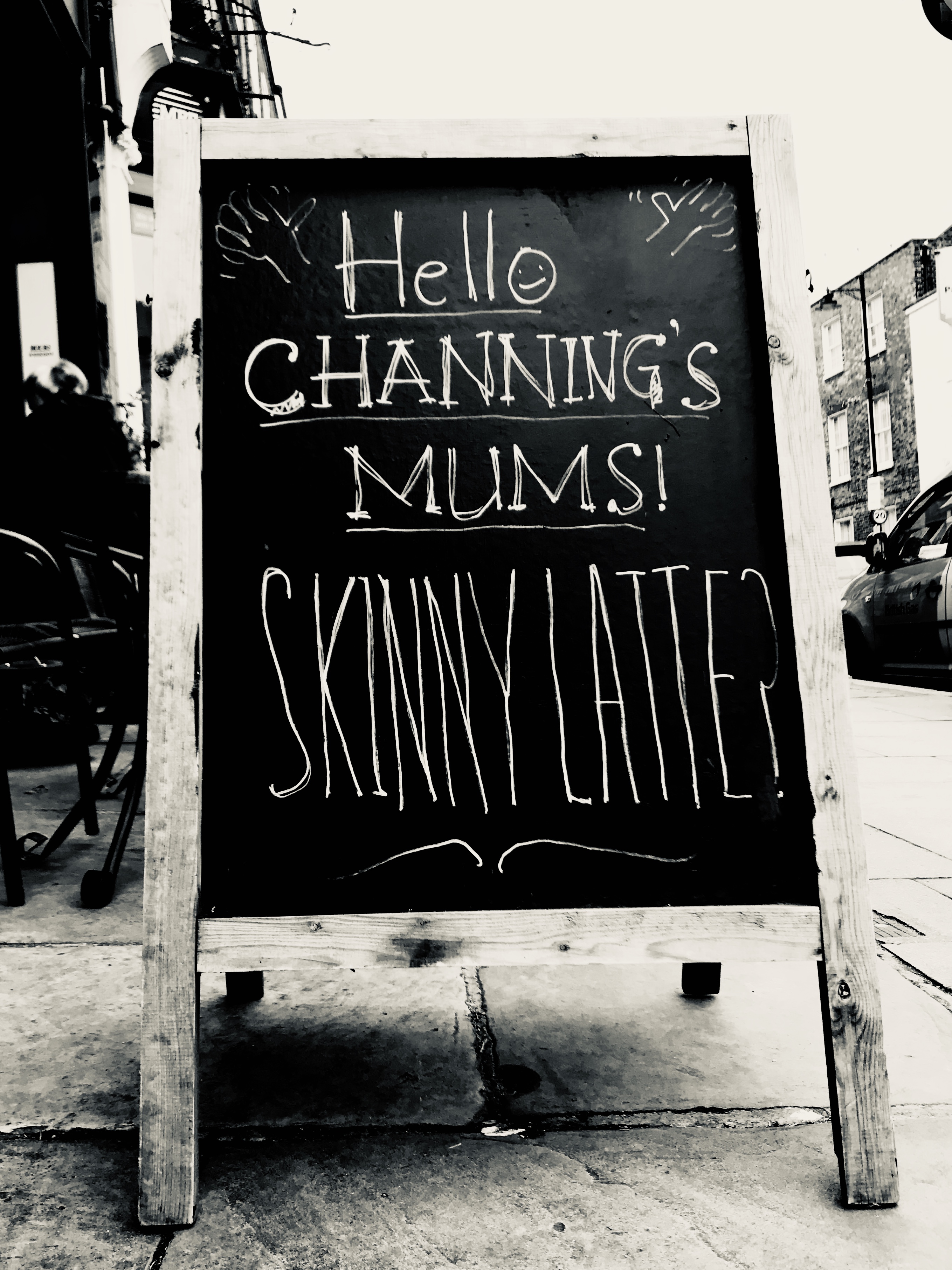 CLIENT FEEDBACK:
CHEESE: We sold a lot, many buyers specifically asking for that ‘smelly cheese’.
INDEPENDENT: Nothing to report, but who’s going to say I’ve just read your sign and would like to buy one fo your coffee’s without a logo on the cup?
LOCATION: Disaster; a handful of mums found our sign offensive, one citing that she worked with anorexic girls.
I tried to look at the positive, saying it’s great that our messages are getting noticed and bringing customers into the store.
Client frowns.
I then suggest swapping ‘skinny’ for ‘fat’?
Deeper frown.
HAMPER: No sales bump, hamper sales went as expected.
ad is probably too wordy to jump out.
Maybe it’s too wordy, must try harder.

WEEK 2.
CHEESE. Maybe we show our range? With a bit of self-deprecation.
Mark Denton’s phrase ‘eye-wateringly expensive’ springs to mind. 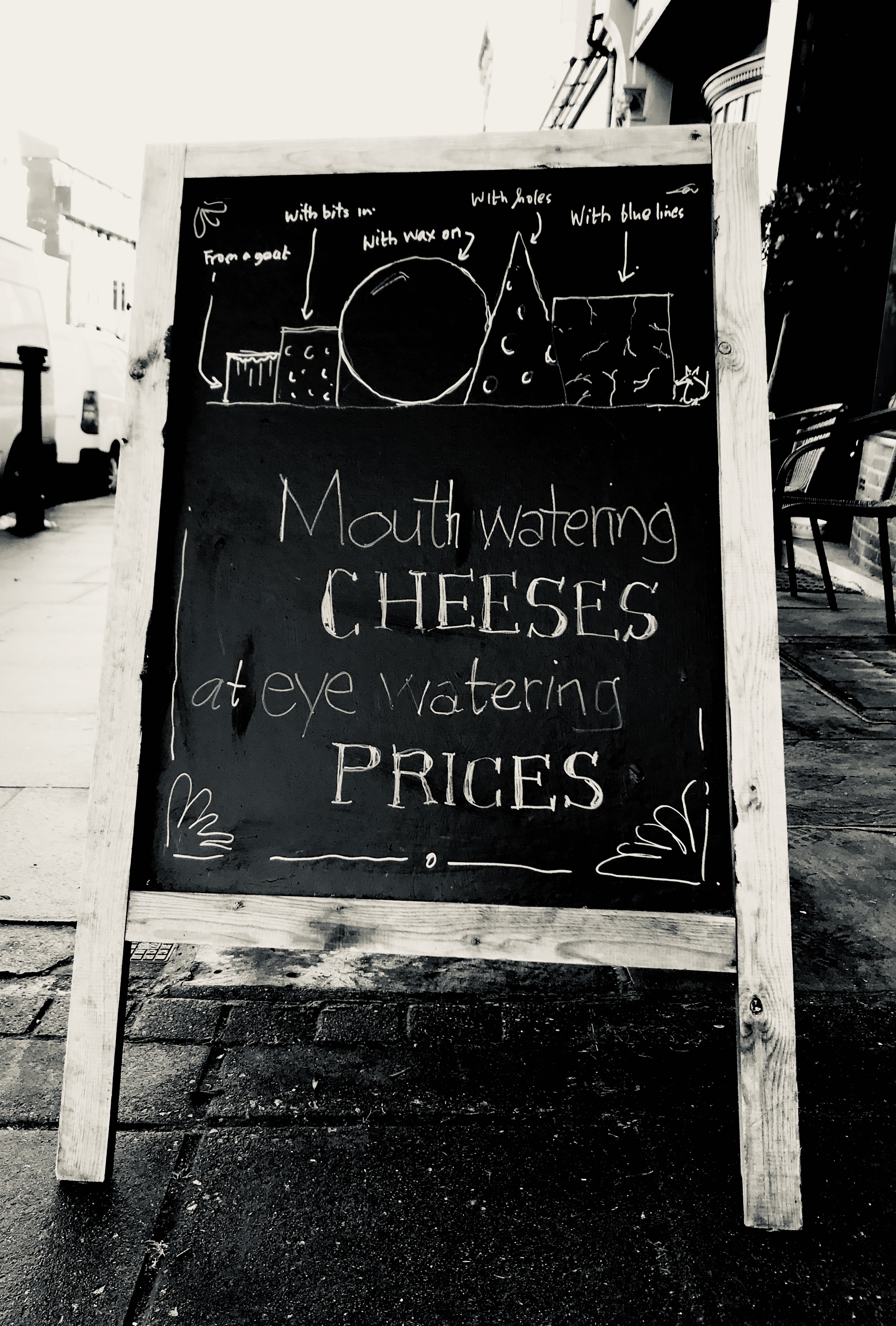 BRAND: Let’s try to sum up our ‘purpose’. 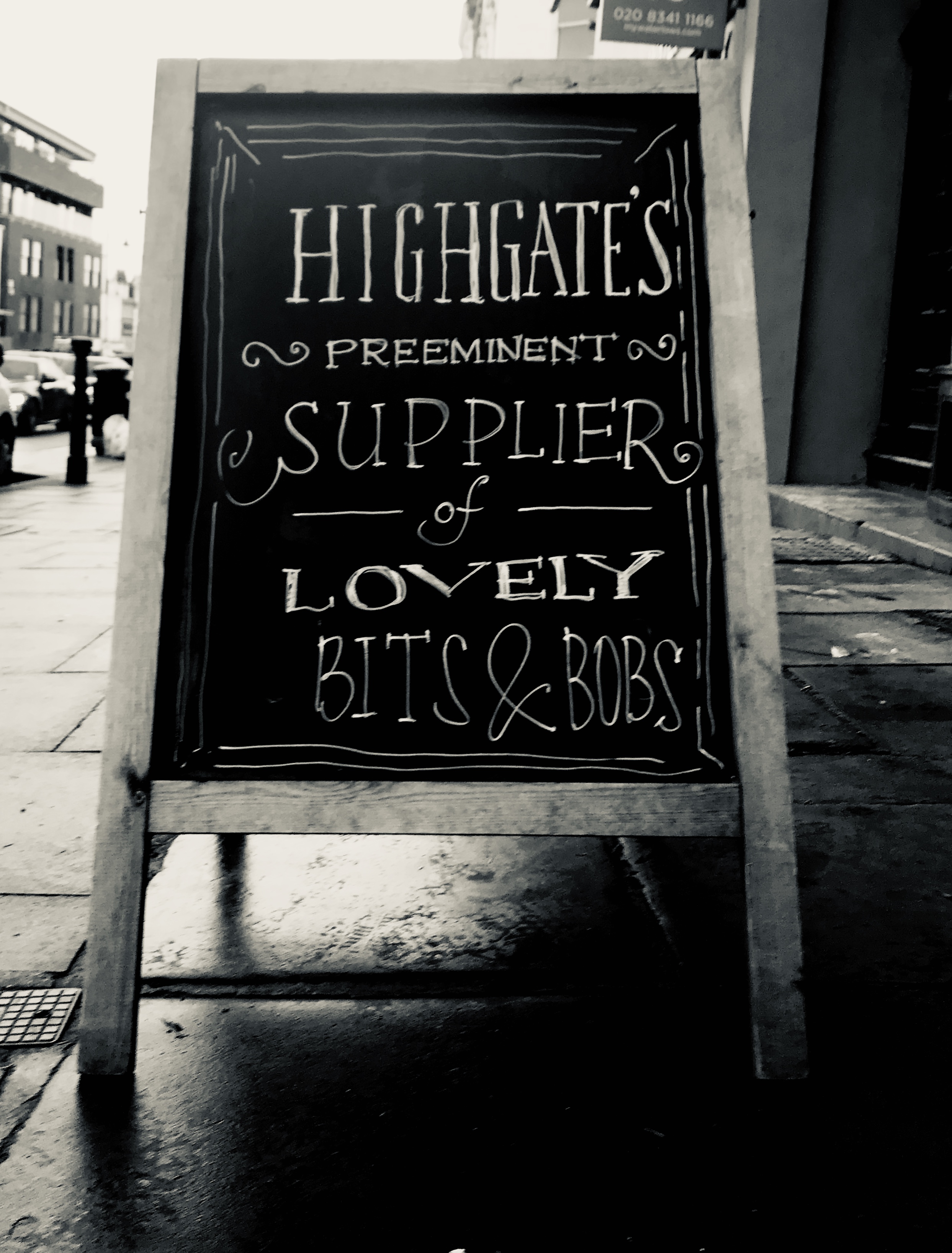 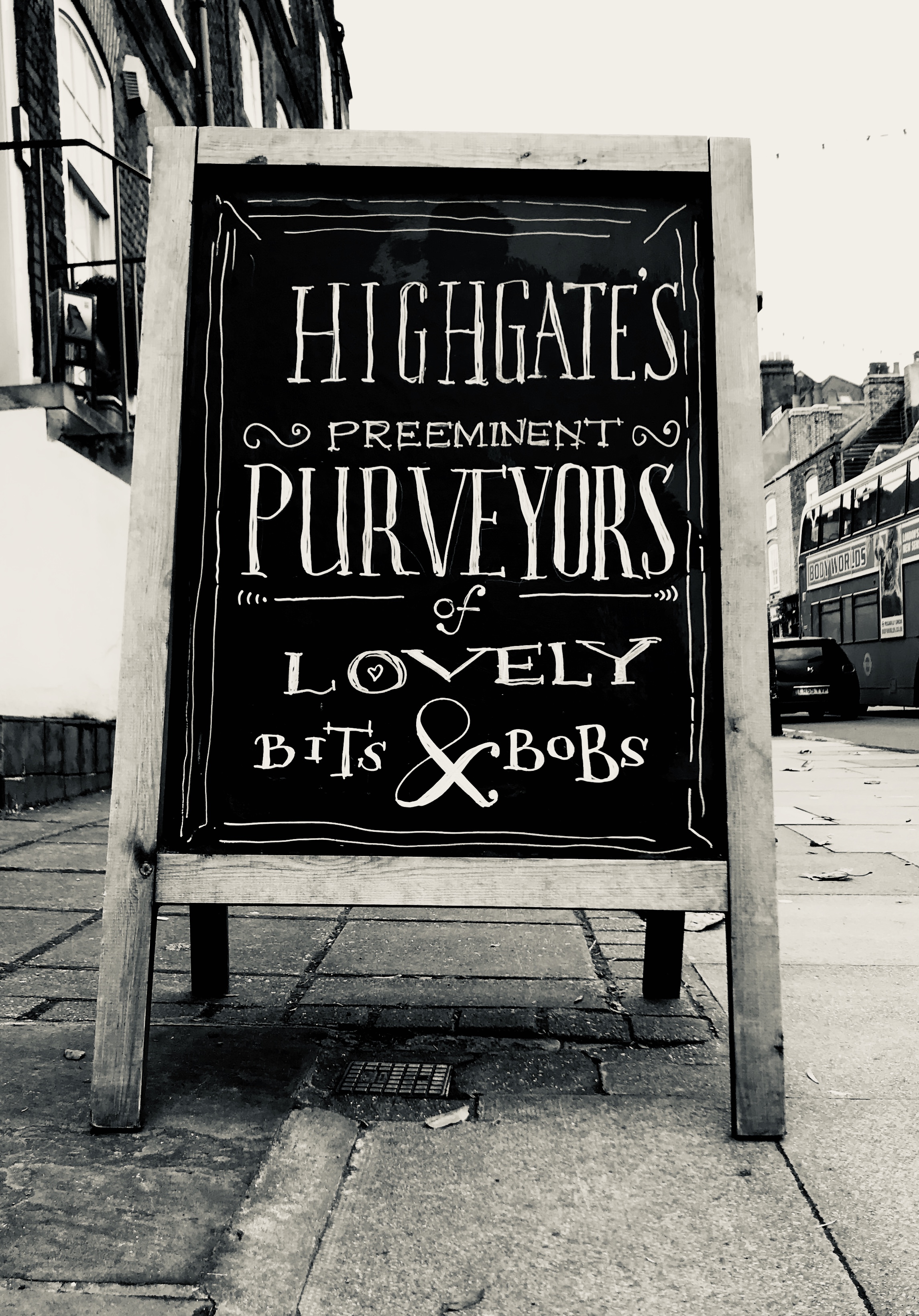 COFFEE: How the hell do I lure people in to buy a coffee just using chalk?
Maybe we fess up about our aim? 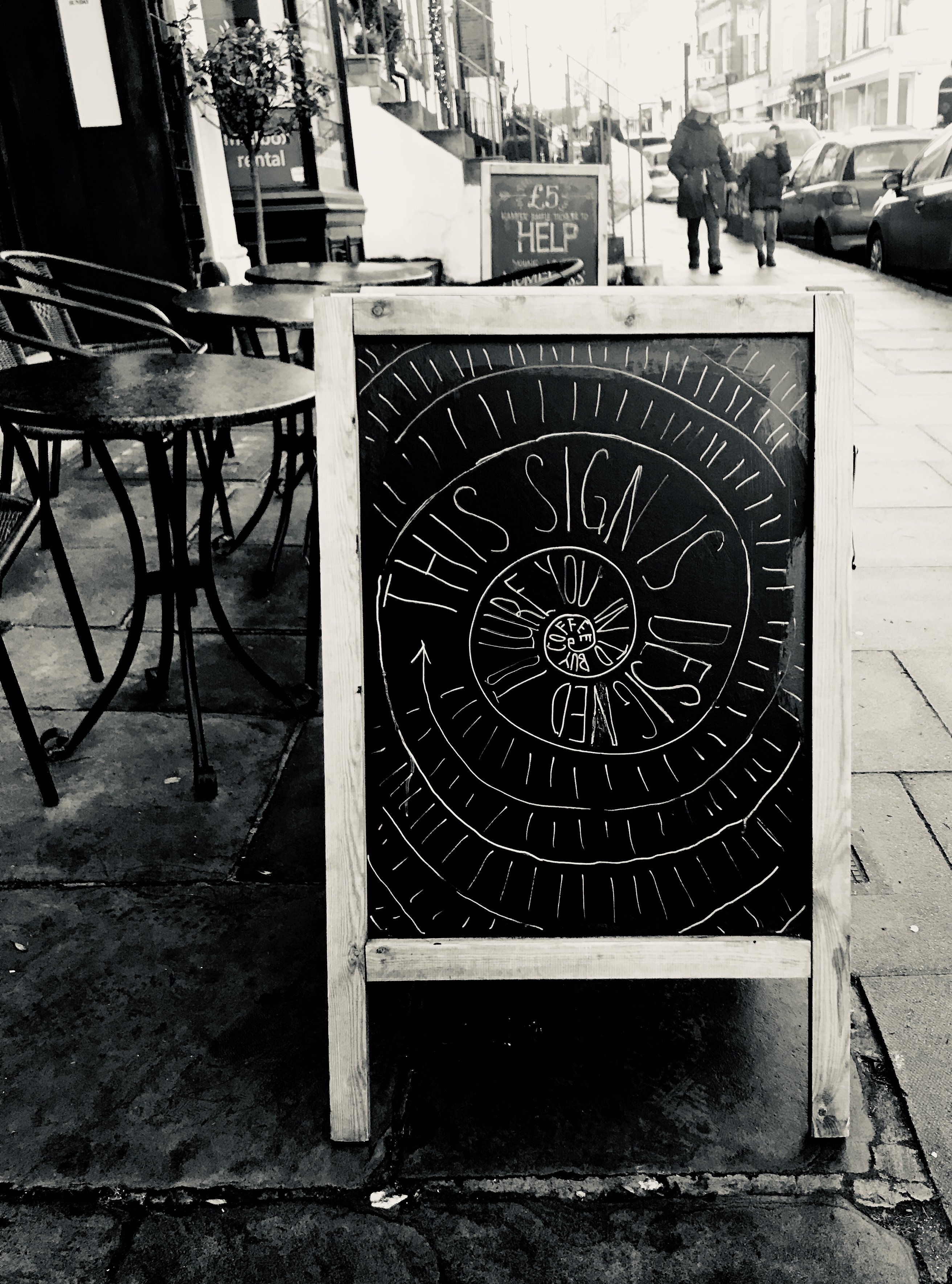 TACTICAL. The client has just taken stock of some Christmas Hampers, they need to be gone, nobody buys Christmas Hampers in January.
What do you say? Maybe they are a good Christmas present? Especially for those leaving their present buying to the last-minute, or ‘men’ as they are more commonly known as. 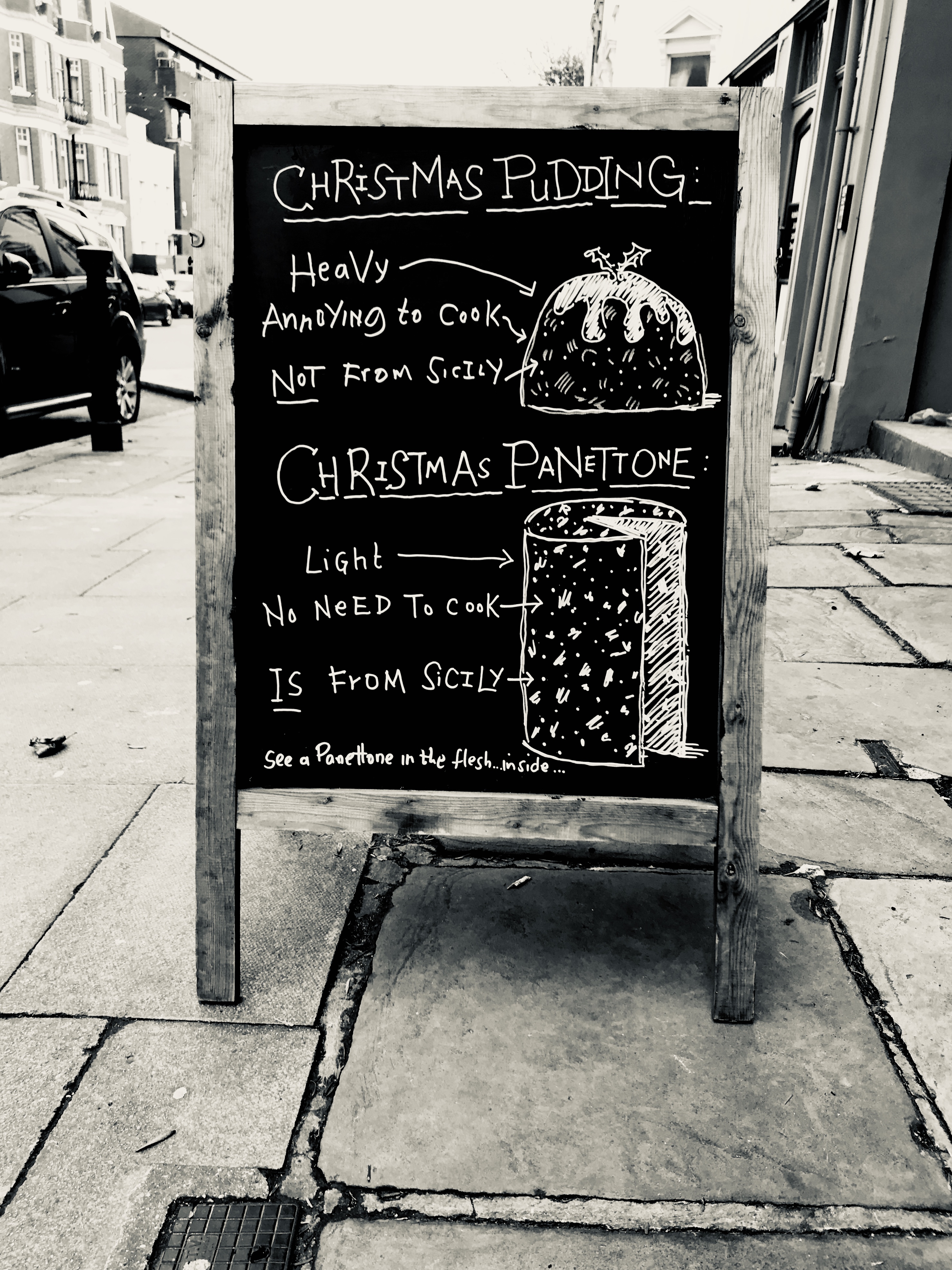 CLIENT FEEDBACK:
CHEESE: Sales of cheese continued to be up.
But on reflection, I feel it’s too addy; the layout, the wording, these boards should handmade, not professional.
Client feedback – ‘Do we have to keep saying that everything is expensive?’
BRAND: Weirdly, lot’s of customers mention that they like that message.
The general feeling is because it’s accurate and charming.
Client mentions that she particularly likes the look of this one – ‘classy’.
As I mentioned in ‘Cheese’, I think they should feel imperfect, as if the client has written them herself, if it looks like a professional has been called in we fail.
COFFEE: Nothing to report, except the Dry Cleaner liked it.
TACTICAL: Boom! Panettone sold out, ordered more.
Again, the most specific thing seemed to work best.
Next, a lot of people said they liked the ‘purveyor of bits and bobs’, when pressed why the clients said they thought it was true.

I was all set to make next week’s messages totally specific, like the Pannetone one, because then I could easily measure its success.
But a bit of non specific feedback stopped me doing this; ‘I noticed a lot of new faces were coming in’.
Perhaps creating a friendly dialogue with the community breaks down a barrier to them coming in?
Maybe making everything measurable would be like going down the same rabbit-hole that some people do when working online; they seem to prefer smaller numbers that they can account for than larger numbers ones that are more difficult to explain.
(‘The ‘Lure you in’ concept lead to possible new business lead; Highgate Stationers.)

WEEK 3.
CHEESE: ‘Expensive’ is out, what do we say? Delicious? Boring! Maybe we can reference one of the famous local residents, for a bit of talk-ability? 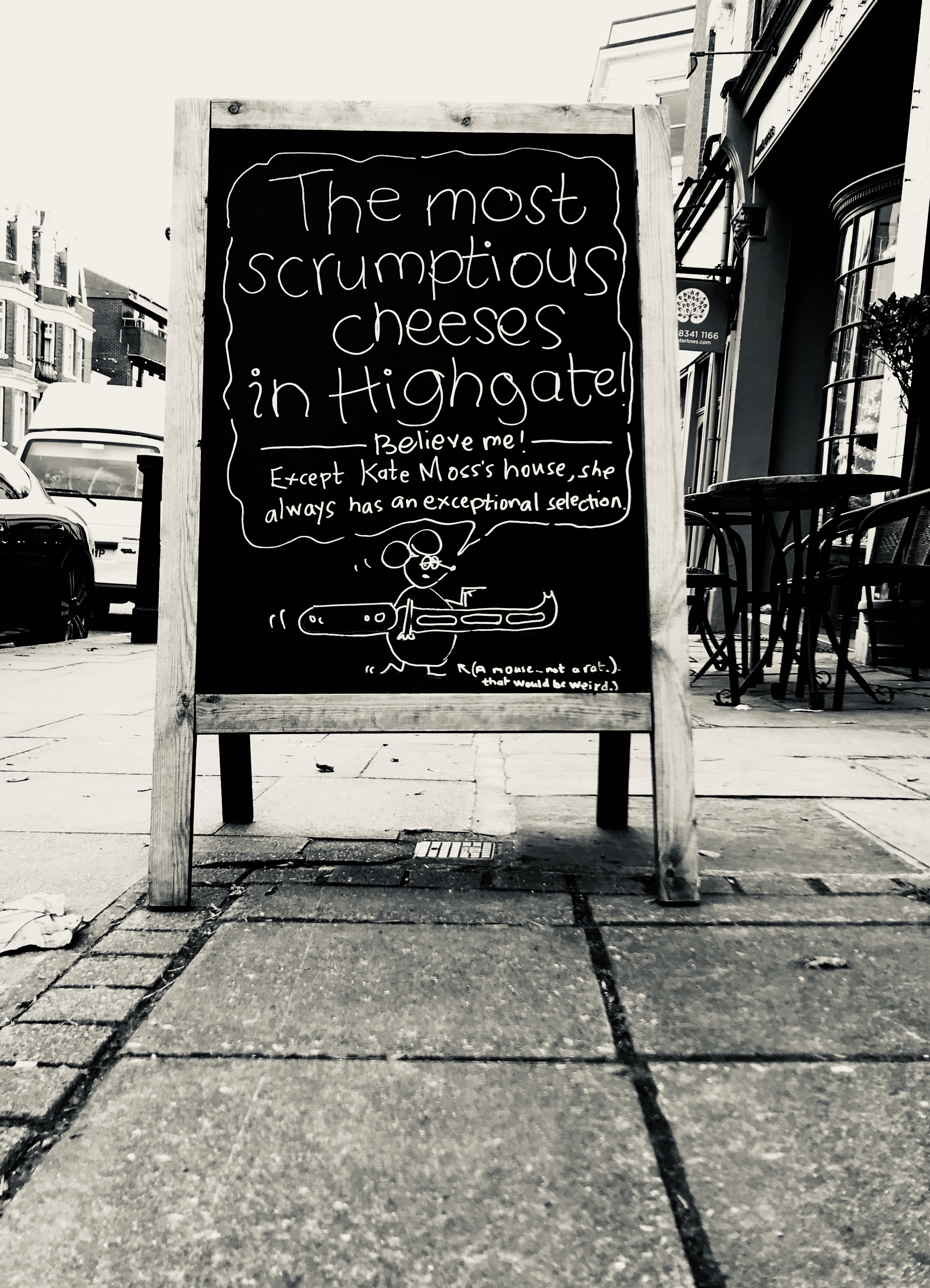 TACTICAL: The bit between Christmas and New Year? What do we say? We don’t sell turkey. 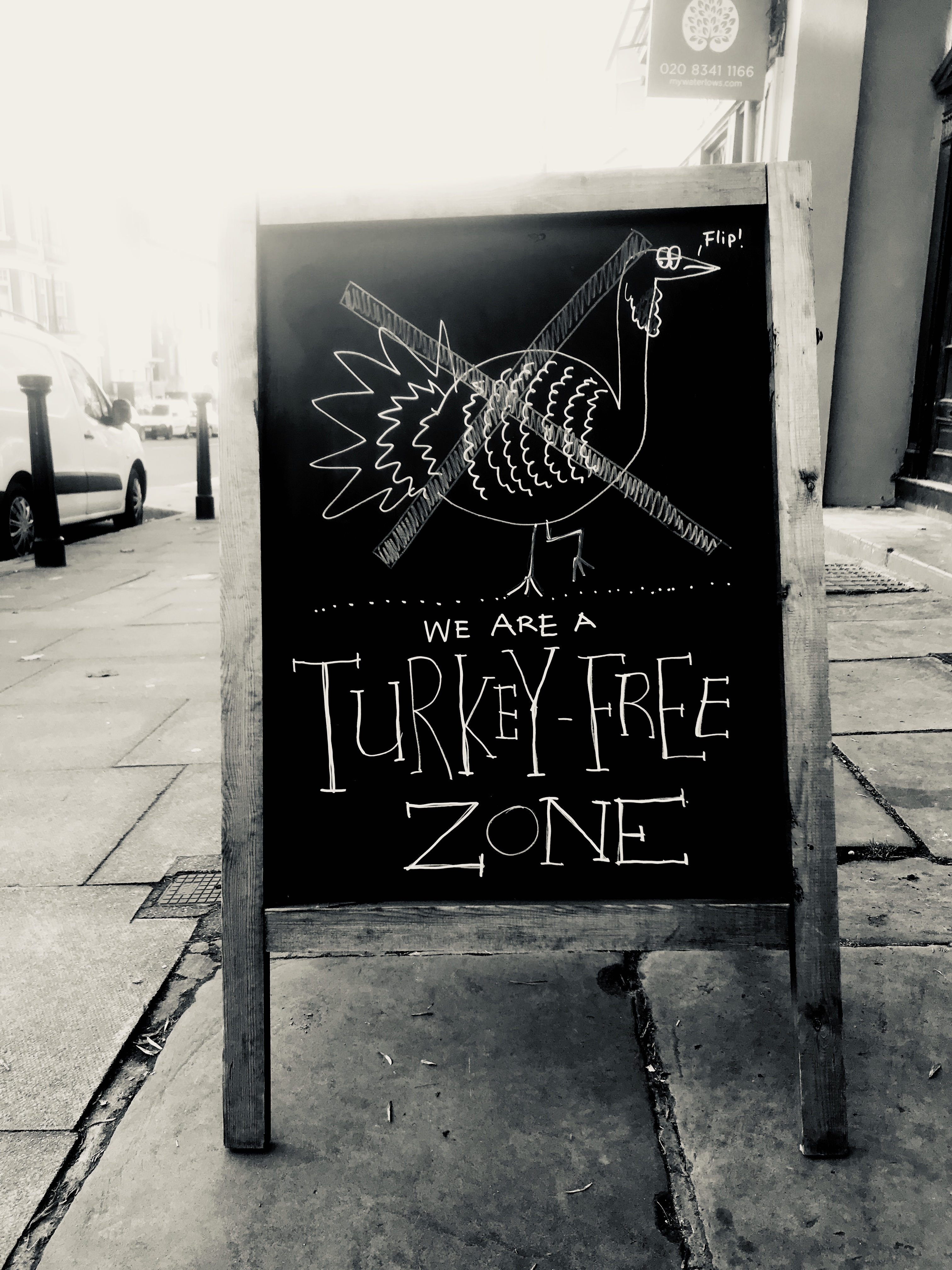 LUNCH: The new ‘coffee’. What do we say? We’ll warm it? People probably aren’t aware that it’s possible to heat, also, it sounds personal, friendly. 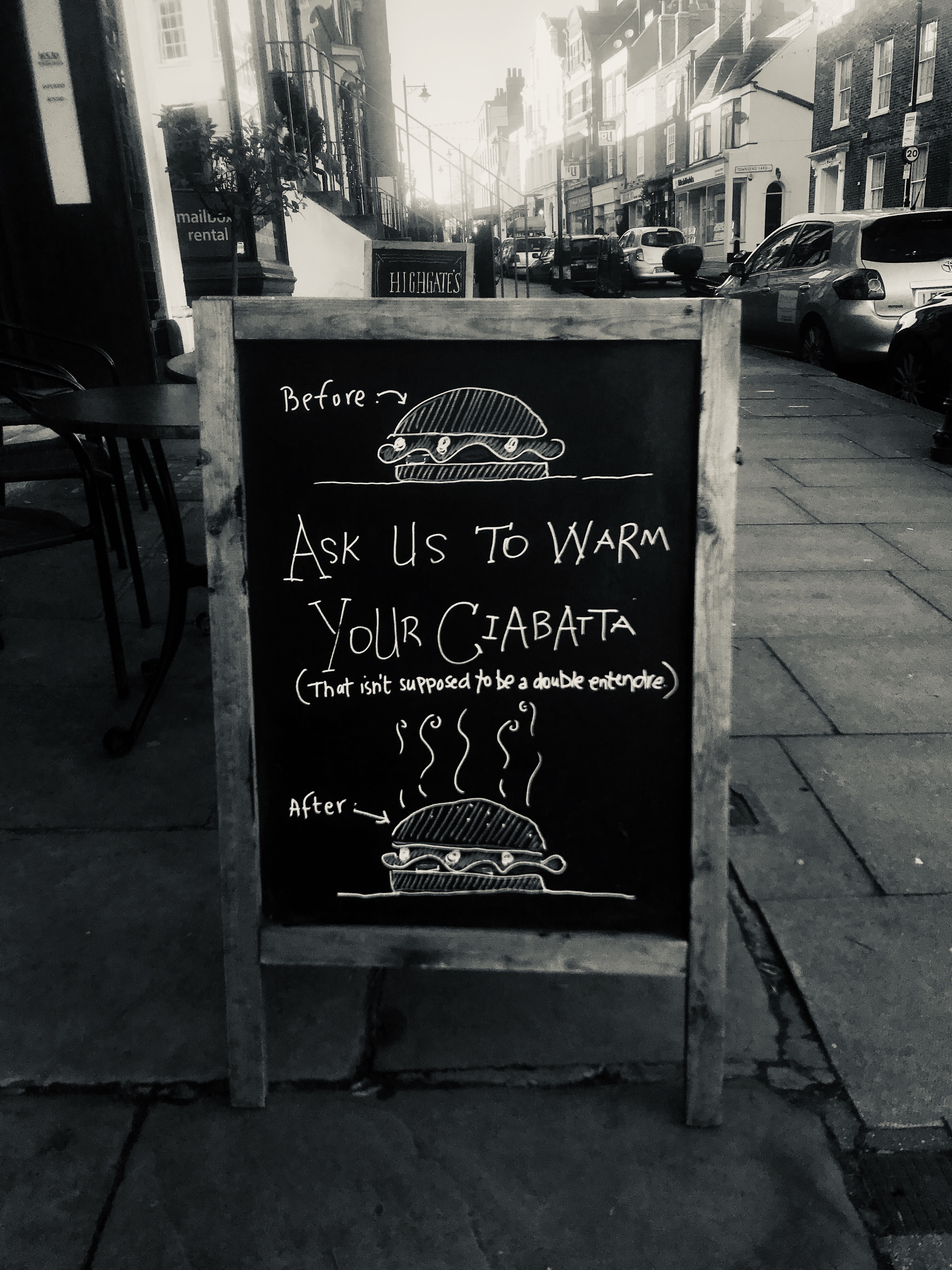 Whilst waiting for my coffee the morning after the client mentions that few people have asked the client what a double entendre is.
I look at it again; shit joke, too complicated and the idea is really the wiggly lines, which is lost. 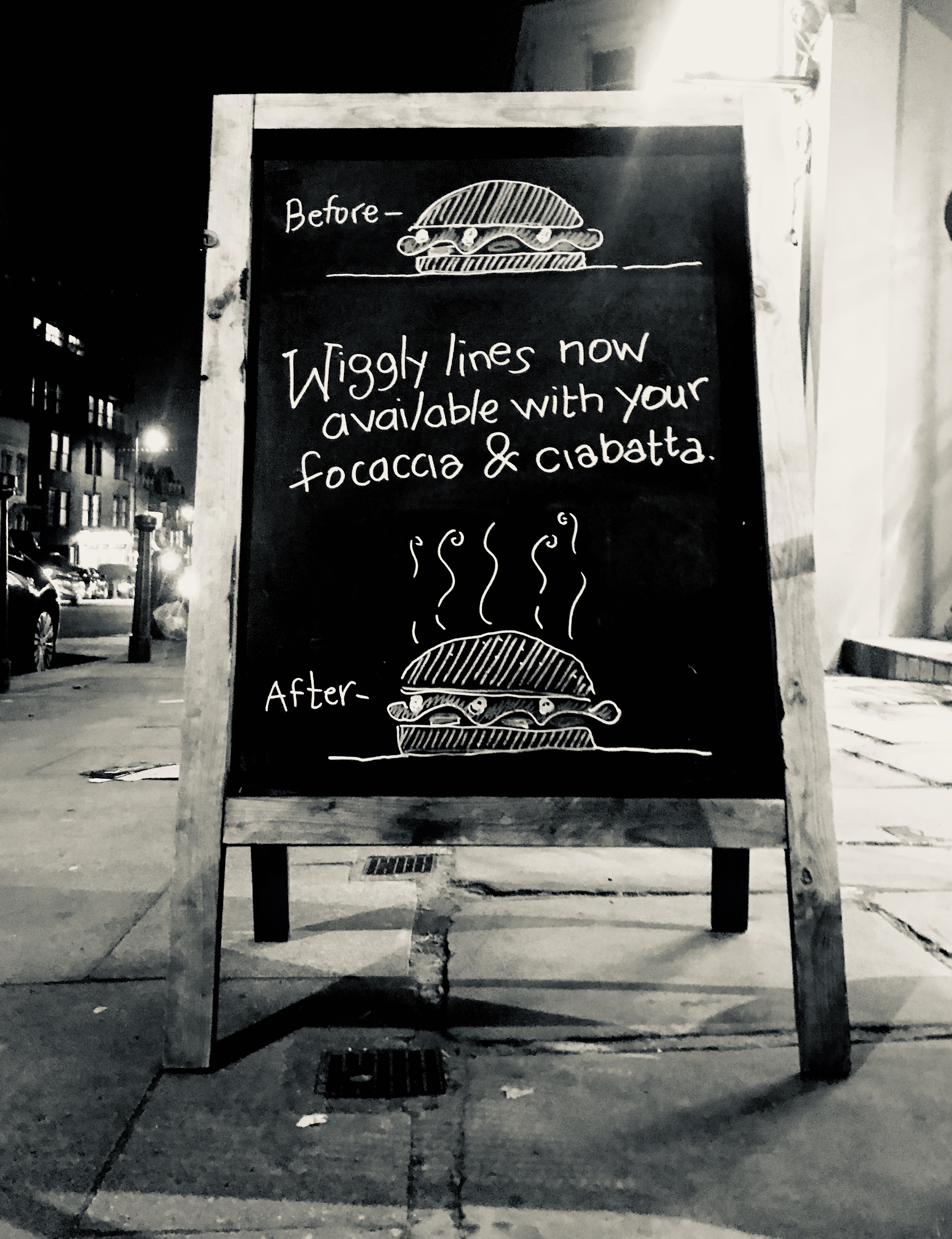 BRAND: The client has just taken stock of some own-brand virgin olive oil. It apparently took 6 years and over 200 samples before she found one she was happy with, before settling on one from Sicily.
Sounds impressive, so I try to take the essence of that information and condense it into a message.
It’s long and starts to sound like an advert.
I figure the job is to make people aware that there is now a virgin olive oil that bears the shop name, she can talk the rest, face to face. 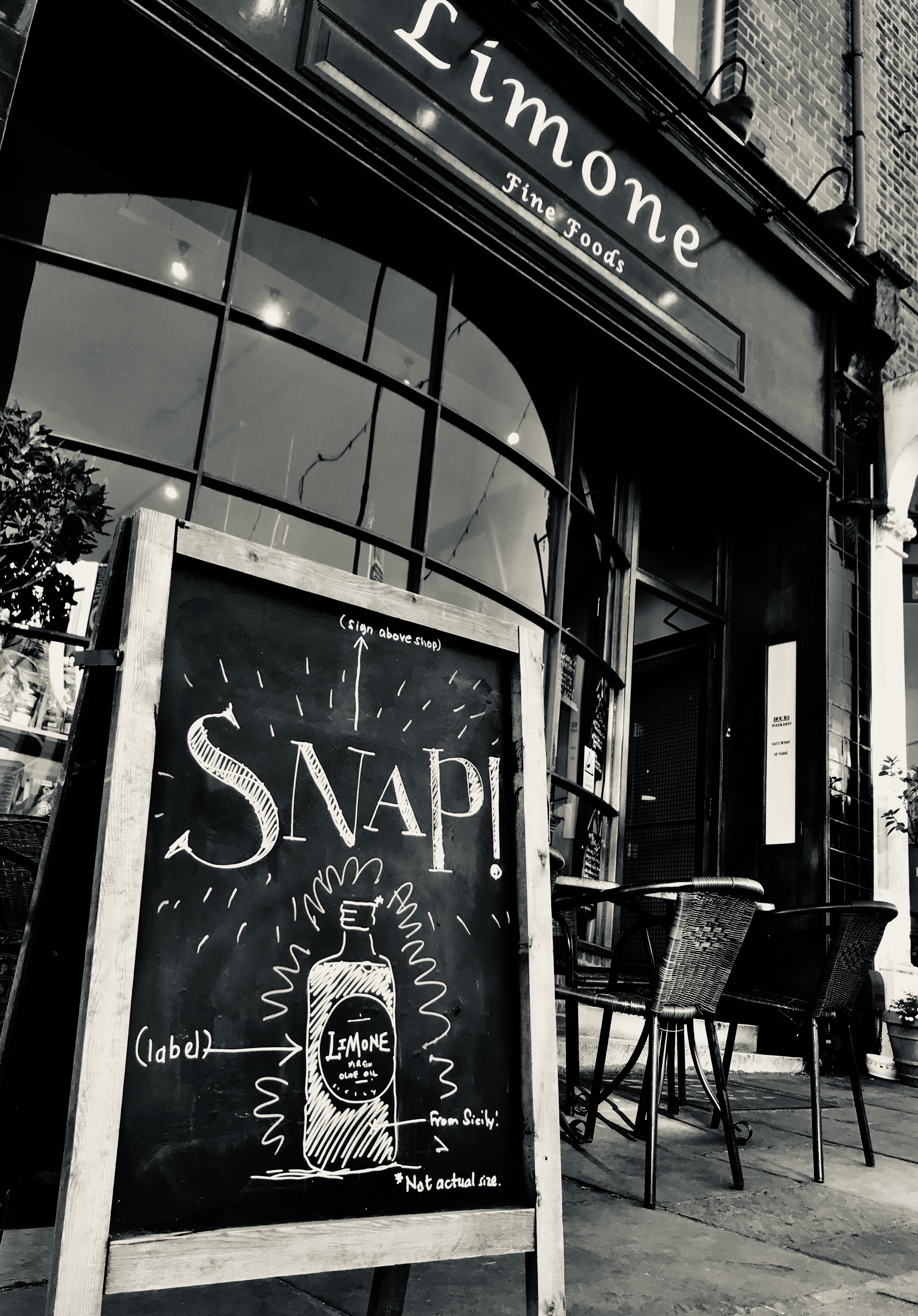