I bet there were few takers for the 1966 National Library Week brief amongst DDB New York’s creative department.
Because the previous year Charlie Piccirillo had produced the definitive ad.
It looks so simple and innocent.
But try ignoring it.
Or forgetting it.
It’s impossible.
It makes you think about books and libraries in a new way, without big dramatic photos or imaginative colourful drawings, using only the very product it’s promoting; the alphabet.
Whilst interviewing a couple of guys from that sixties creative department I stumbled upon this and couldn’t resist sharing it.

“One of my earliest assignments after being made an Art Director was a PSA ad for the Public Library.
Full page, NY Times. Wow.
How did this one get by my supervisor, Bill Taubin who seemed to glom all the plums?
Probably because he also assigned me a ton of small space ads for EL AL that would run in the Tel Aviv News, where the ads would be translated into Hebrew.
In any event it was a big opportunity for me and Monte Gherlter so we spent some long nights working on it.
We finally came up with the idea of using the alphabet as the visual.

I set the line in 12 pt type and placed it in the middle of a full page of white space.
Monte’s headline still holds the record of being the longest headline ever written in DDB history.
However, it was brilliant:
In your Public Library they have these arranged in ways that can make you cry, giggle, love, hate, wonder, ponder and understand.
I sent the copy out for type (remember that) and in the morning did a rough paste up.
I was so excited I decided to show the ad off to the art director next door, which just happened to be
Helmut Krone. He took a long look, then he said, or rather growled, “Boring”.
I was crushed. I spent the next 2 days and nights putting together a dozen new versions, using every imaginable alphabetical visual device from children’s blocks to a bowl of alphabet soup.
Then the trouble was, I couldn’t make up my mind. So I called Nancy and asked if I could come up and see Mr. Bernbach. To my surprise Nancy said he was coming down to see Bob Gage and would stop by my office on the way. Bill come to my office? I called all my Art Director buddies to come take a look.
When Bill came in I had all 10 versions pinned to my corkboard. He glanced around and looked as confused as I was. Then he said: “This is a really good idea Charlie, but boy did you screw it up”.
Why don’t you just put down the alphabet in small type across the page as the visual. It would be much more powerful.”
I said, Bill, that’s the way I started, but Helmut thought it was boring.
Bill shook his head, and as he walked out he said, “Charlie I’m going to see Bob Gage now, and the first thing I’m going to tell him is to give you a raise, then I’m going to tell him change your office”.
The Library ad won my first Gold Medal at the 1962 Art Directors Club Award Show.
It’s still my most treasured.” 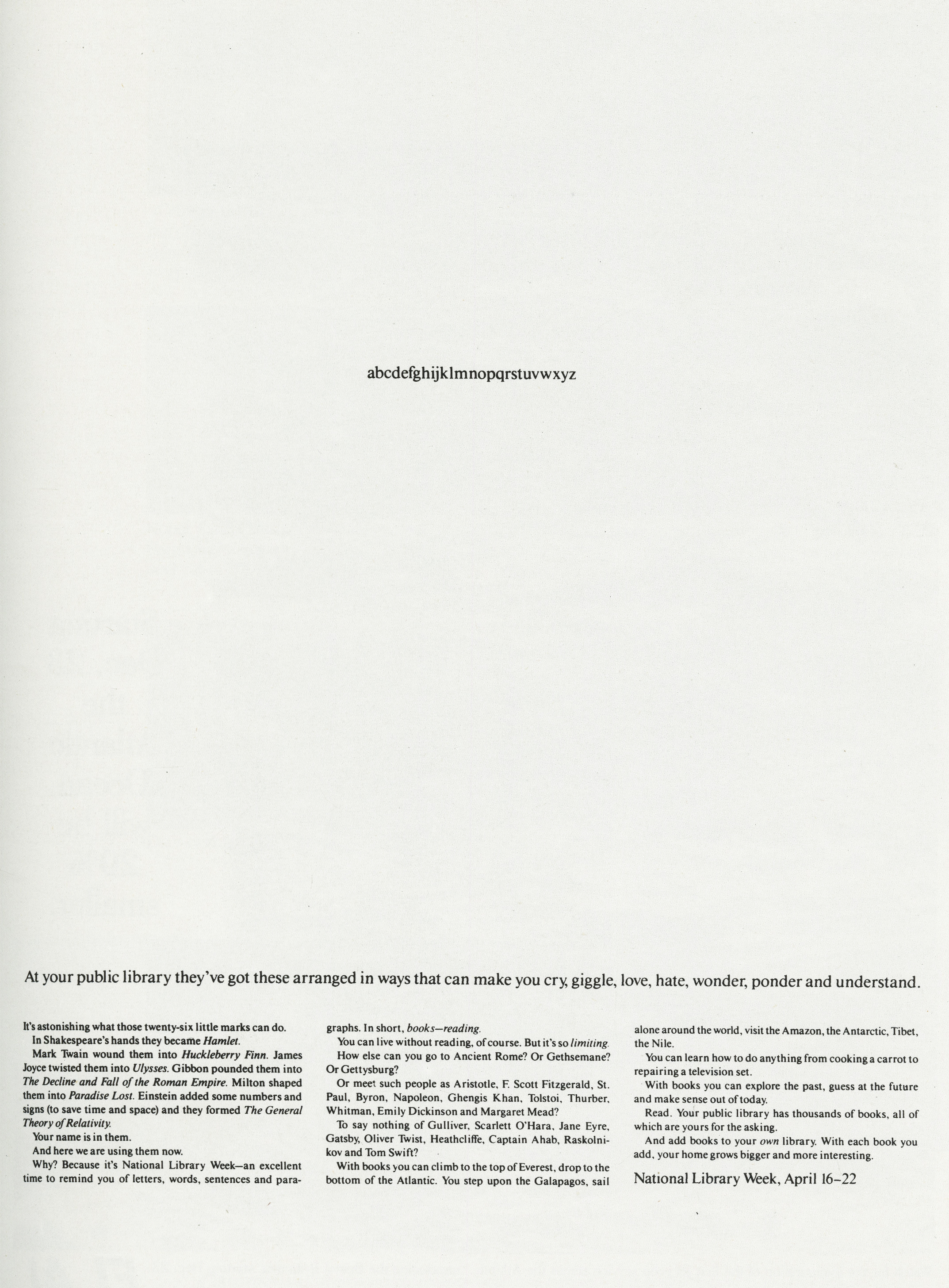