Being chosen as one of fifty people to pitch an idea for the cover of the D&AD’s 50th Anniversary Annual is great for the ego.
What a great list to be on: Terry Gilliam, Sir John Hegarty, Bob Gill, Wim Crouwel, Sir Paul Smith, Phillipe Starck Neville Brody, Dave Droga, etc.
AMAZING!
Then comes the anxiety.
What the hell am I going to do?
The results will be very public and I’m up against 49 of the best people in the business.
Terry Gilliam – brilliant! Sir John Hegarty – amazing!, and Bob Gill – top ideas bloke, Wim Crouwel – superb, Sir Paul Smith – obviously a genius, Phillipe Starck – incredible, Neville Brody – awesome, Dave Droga – amazeballs.
How the hell am I supposed to compete with that lot?
That was only eight of the blighters, there’s another 41 of the fuckers on the list.
SHIT!
I decide to re-read the brief, it’ll focus and therefore calm me. Jesus Christ! What does that even mean?
What the hell does ‘The Power of Creativity’ mean?
That’s not a brief it’s just a bunch of words.
That’s just great, so the blank page I usually start with is even blanker than usual.’
The creative process has started.

A lot of non-creatives assume that what creatives want is absolute freedom, miles of blue sky.
It’s not true.
If your target doesn’t have edges how do you know where to aim?
Cigarette advertising is a great example, it was a pretty dull category until the Government brought in a ton of regulations, there were so many do’s and don’ts, mainly don’ts, that it became almost impossible to create an ad.
Within a couple of years it was one of the most creative categories around.
Having a problem forces you to focus.
‘The Power of  Creativity’? Why not make the brief ‘Do whatever’.
What problem am I trying to solve?
After a few aborted attempts to think of an idea, unfortunately not one for a cover, just one to help me understand the ‘brief’, call them.
D&AD Bod over the phone: ‘You don’t have to think of an idea if it’s too hard, you could simply sign a piece of your work and that could be your cover!’.
I guess I could do that, if I want to look like a pretentious, self-obsessed twat.
Okay, it is what it is.
I’d designed a D&AD Annual before, it complicated, involving lots of fancy foreign designers, printing on silk and lenticular panels, I may not have an idea yet, but I knew I wanted this one to be
I wanted it to be very me, whatever that means?
So how the hell do I do that?
I guess the only way for it to be ‘very me’ is to be very revealing.
The younger me would have been too cautious to do something revealing, I’d be too aware of what my cover said about me.
But worrying about others inhibits creativity.
I’ve worked with creatives, good ones, who’d avoid any brief that didn’t look like it would yield gold. Consequently they’d make only one or two ads a year.
To them, it was quality control, if they didn’t do anything bad then people wouldn’t think bad of them.
I’ve always thought ‘just have a go!’ Create some stuff, even if you didn’t win an award you’ll have gained something; knowledge, insight, a relationship, who knows?
Also, there’s a possibility that you were wrong, that unpromising brief might lead to something great.
I digress, where was I? Oh yes, what do I put on this cover?
I must’ve spent a month or so going around in circles, I’d have a half idea…then bin it, I’d think of a terrible idea…then bin it, another half an idea…hang on, what about an idea with a bin? Rubbish! Bin it.
It was annoying.
But, the brain works in mysterious ways; it occurs to me that this is the idea, this whole annoying process of not being able to think of an idea.
Maybe I show a stream of consciousness where I get irritated by the fact that I can’t create an idea? It’d be a very honest example of creativity.
Also, I hadn’t seen it done before.
A few days later I was on a plane to Vienna, trapped, the perfect place to try to solve the brief and write whatever pops into my head.
Occasionally I would get distracted, my mind would wander, those distractions and wanderings got written down too.
Two and a half hours later I had over a thousand words.
I was lucky I had so many words kicking around my cranium that day, although, to be fair, these weren’t carefully chosen words, it was just an unedited splurge.
I thought I’d write what’s true, be uninhibited, and review it later to cut anything embarrassing.

I wrote without inhibition, I thought I’d get it down an edit out anything that was too odd or revealing, but reading it later I realised I couldn’t cut anything out, not because it was all good, but because it was true.
As disjointed and at times random as it was, it kind of hung together.
If I polished and fiddled with it may not feel like a genuine stream of consciousness, it needed to be raw and a bit random.
I liked that it was full of stuff Creatives often hide, it reveals to non-creatives the ugly side of creating; the bad ideas, egotism and plain idiocy.

HOW DOES IT LOOK?
But bringing ideas to life is tricky, Woody Allen says that his films are at their best before they are filmed, that what ends up on the screen never as good as what was in his head.
For me, turning a doodle into something finished is one long decision-making process.
The more I question myself the more decisions I’ll have to make, the more decisions I make the better chance I have of executing something well.
The best ads can’t be separated into idea and execution, they are one in the same, ‘Form follows function’ as the Modernist Architects used to say.
How do you know whether your form is following your function? You break your idea into as many pieces as you can and question each against its function.
For example, if you have a brief to restore trust to a major bank in the wake of the 2008 financial crisis, a typeface like this may not suggest ‘trust’. 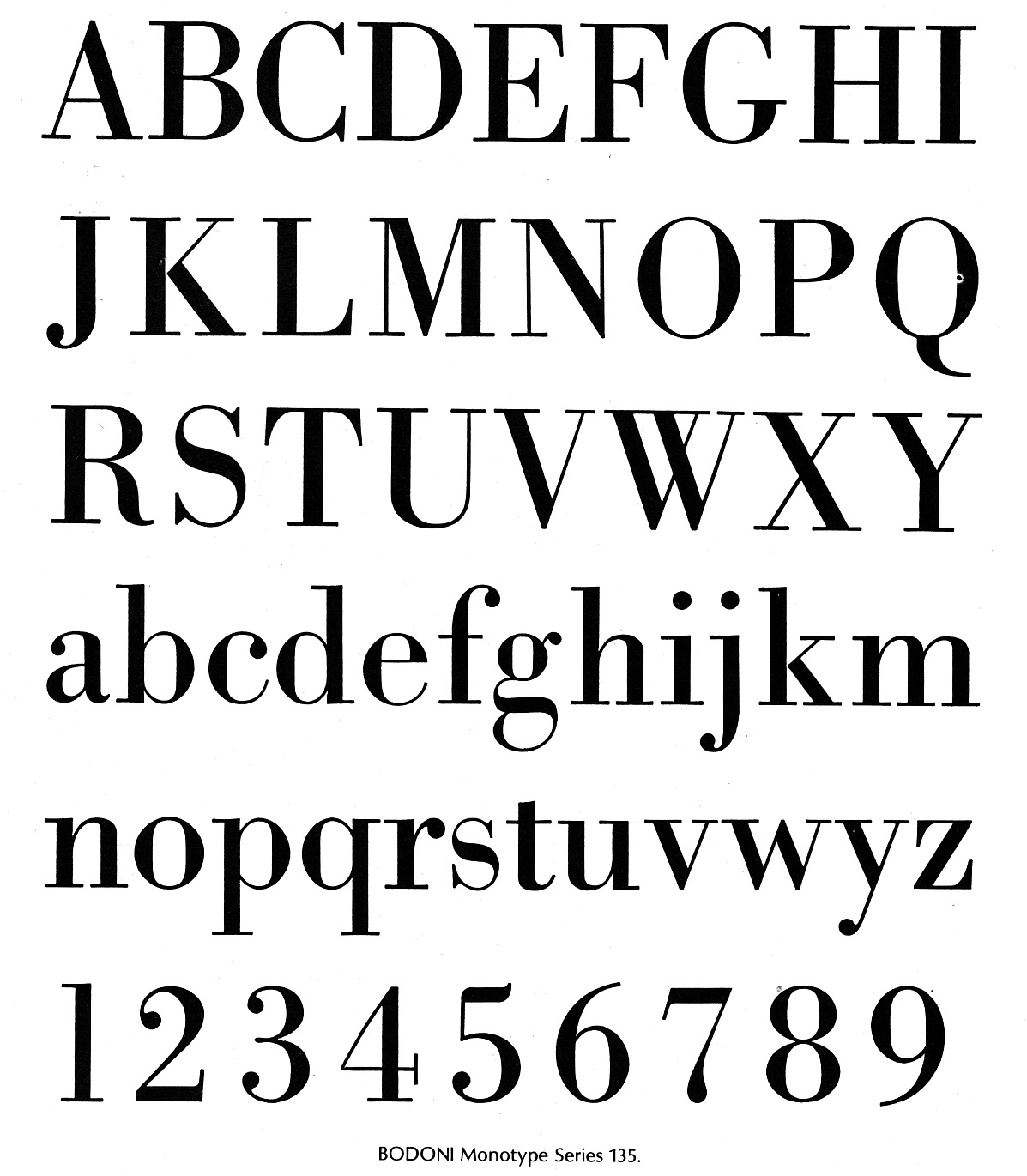 1st PROBLEM: How on earth is this going to fit onto a square book cover?

We could run the text on and make it square-shaped, but not having any breaks or pauses in the text would make it look uninviting to the reader, but that’s irrelevant, it would have to be reduced so much that it’d be too small for them to read anyway.
It be put it in columns, it needs to be one long, unbroken stream of consciousness.
It’ll have to go sideways.

2nd PROBLEM: It looks so bloody boring!
Who’s going to read over a thousand words of 10 point type?
I still haven’t read the text on the back of the 1997 annual because it intrigue me or invite me in.
(I have now Will Awdry, very charming.) Jeez, how do I make this thing look a bit more interesting?
Maybe handwritten?

It needs a bit of colour.
Maybe I could make some of the words colour?
But why?
How can I give the various colours a reason for being? 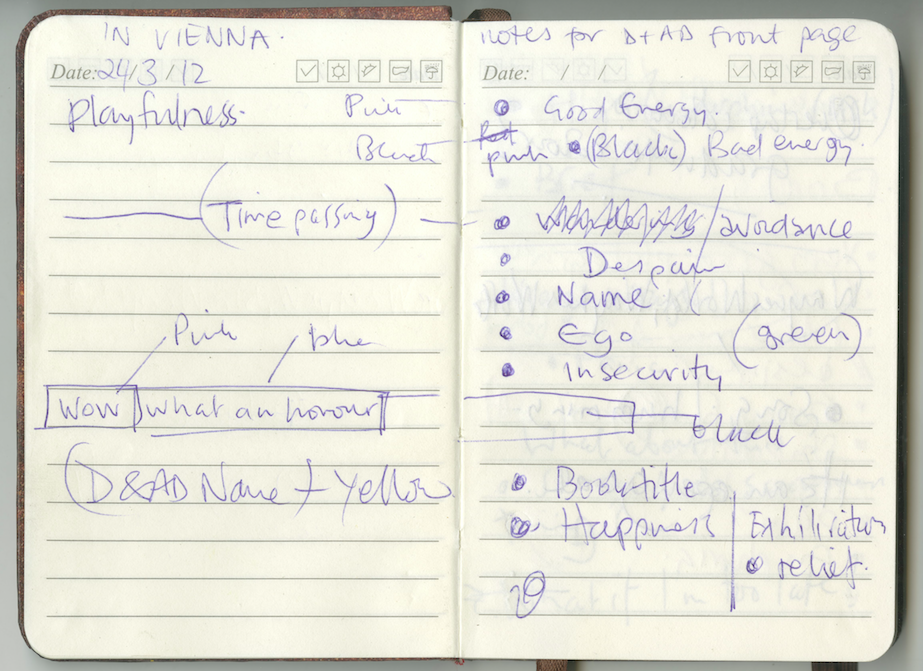 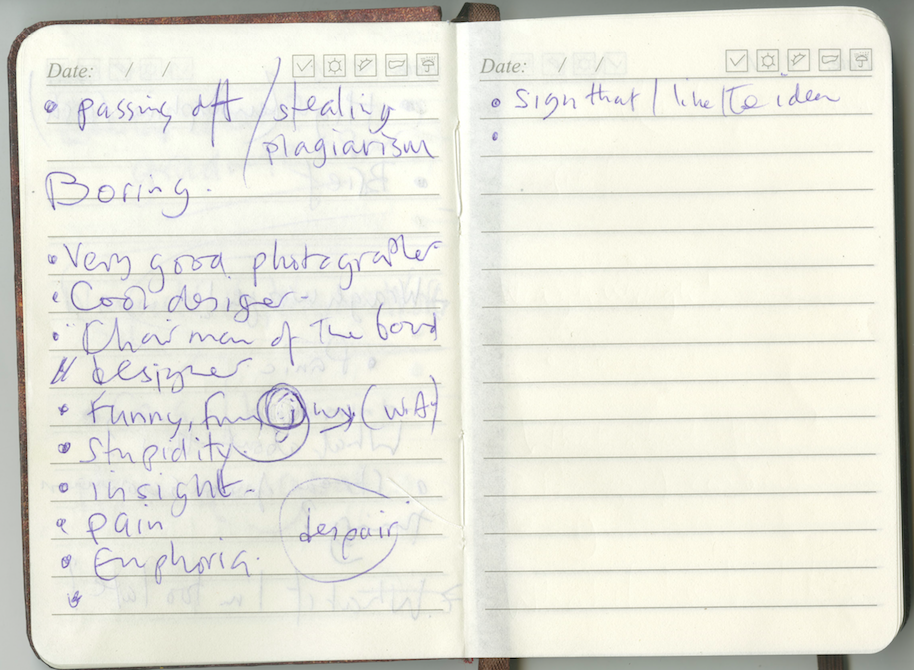 Emotions! Colour code the emotions.
Highlight each thought with a colour, then have a key to what the colour mean, ie, blue = envy, green = anger, etc. 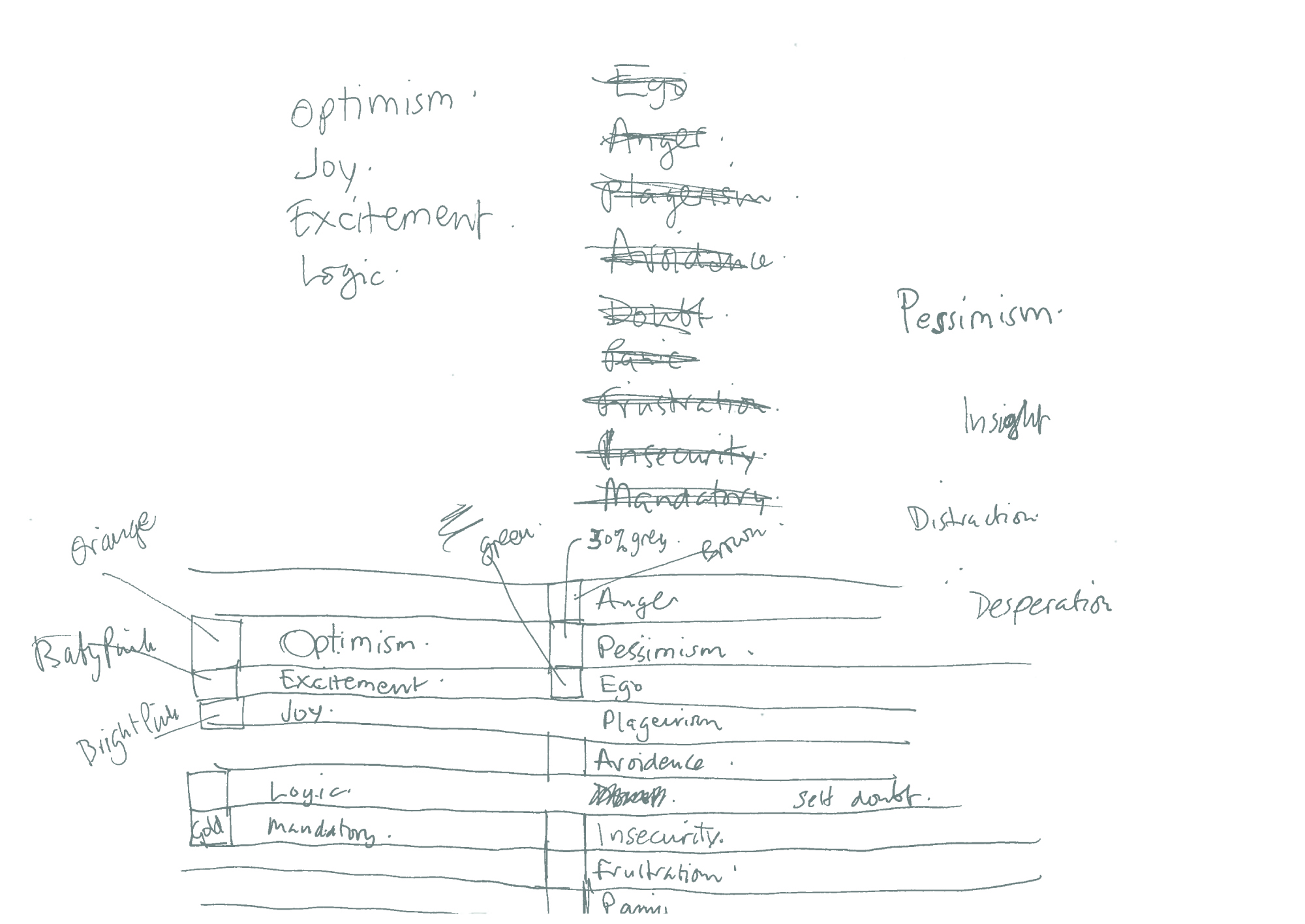 Maybe the colours could be linked to the emotion?
Red = Anger, Green = Envy, Pink = Joy, Orange = Optimism, Black = Despair, Yellow = ? Blue = ? Ok, so we’ll tie in as many colours as we come, it seems the likes of ‘plagiarism’ and ‘insecurity’ don’t really have a colour.) 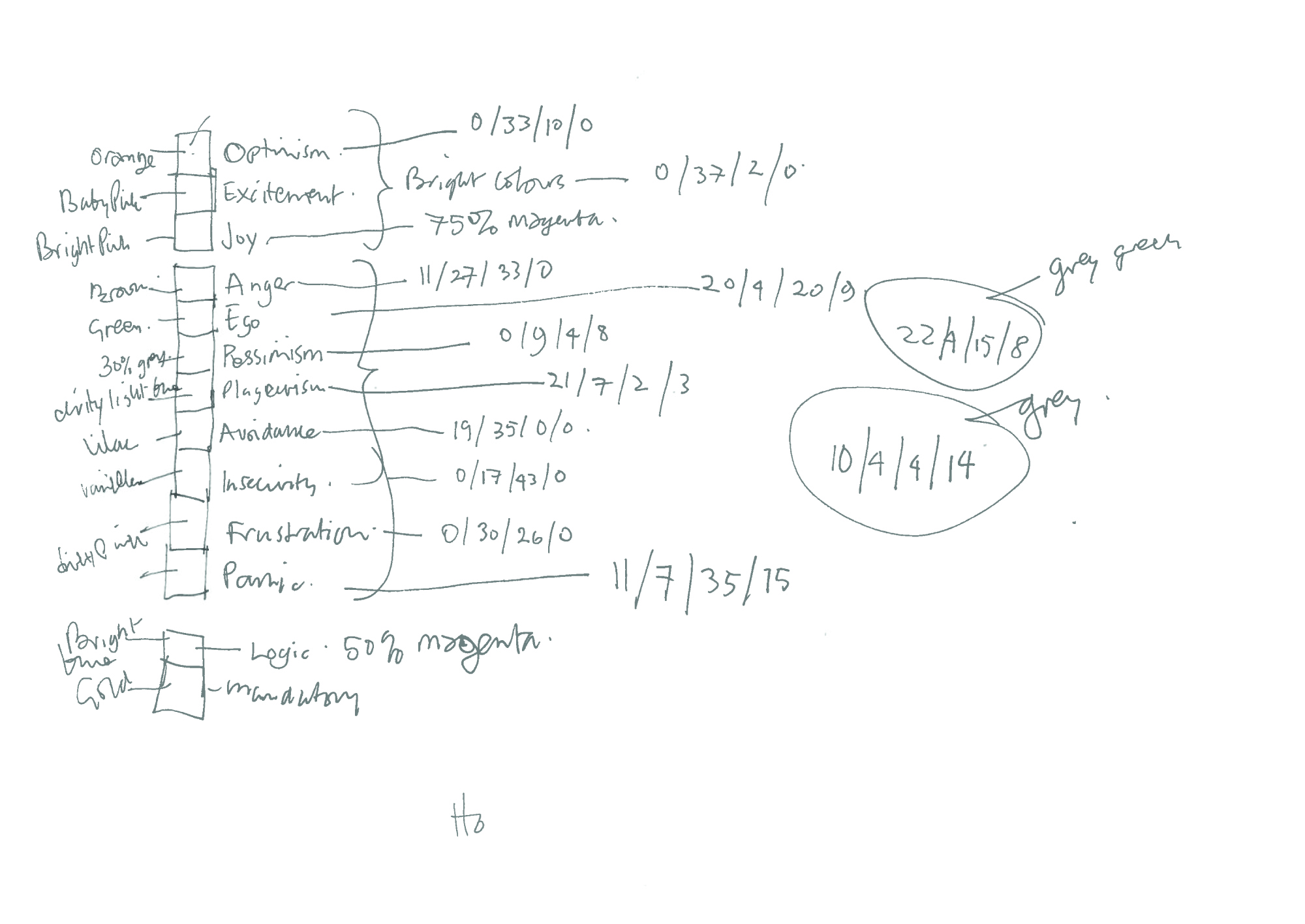 3rd DRAFT:
I place coloured bars asymmetrically over areas according to that specific emotion, asymmetric because I don’t want it to look too designed.

It looks kind of cool, like a piece of abstract art, but the words have become secondary. The words are the idea not the colour guide, besides, nobody is going to try to read that.
It needs some order.

4th DRAFT:
Forget the strips, let’s pick out the emotions in the text in different colours.
I choose the font Pennsylvania Bold, it’s typewritery, so  doesn’t look too designed, and being a little condensed means it’ll come up big, which will help legibility.
I choose the bold version because it’ll take more colour.
Also, I worried about the text, it didn’t seem to end, it just stopped.
What to do?
I remembered seeing a documentary about Martin Scorsese where he explained how he was stuck on an ending for his totally underrated film ‘After Hours’.

He asked a friend, the great British Director Michael Powell, if he had any ideas. In the film a man is bounced through a series of unpredictable events in a single night.
“It’s obvious dear boy…end where you started, drop the main character on the exact same spot on the same street where his adventure began. It’s a perfect circle.”
Well, if it’s good enough for Marty.

It’s now very easy to read but that doesn’t make it readable.
Who would want to read it? It looks too clinical, as though a computer just spat the words out, the very opposite of personal.
Let’s bring handwriting back.

It’s easy to read but feels very cheesy, fake.
I realise why, it doesn’t make logical sense to keep changing pencils with every emotion?
“Ooh I’m feeling egotistical, where’s that green pencil?”.
I know people don’t think about the meaning of graphics and ideas a great deal, but they can feel when something is not right, fake.

6th DRAFT:
Lets try the handwriting in black, to feel authentic, and bring back the strips, but this time neater, more geometric.

Ok, handwriting is good because it’s honest, but has to be black.
The emotional code needs to be scribbled on, like schoolwork being marked.
It’s a better representation of the process – it looks like its been assessed after it was written, then evaluated.

It was chosen as the official 2012 cover. 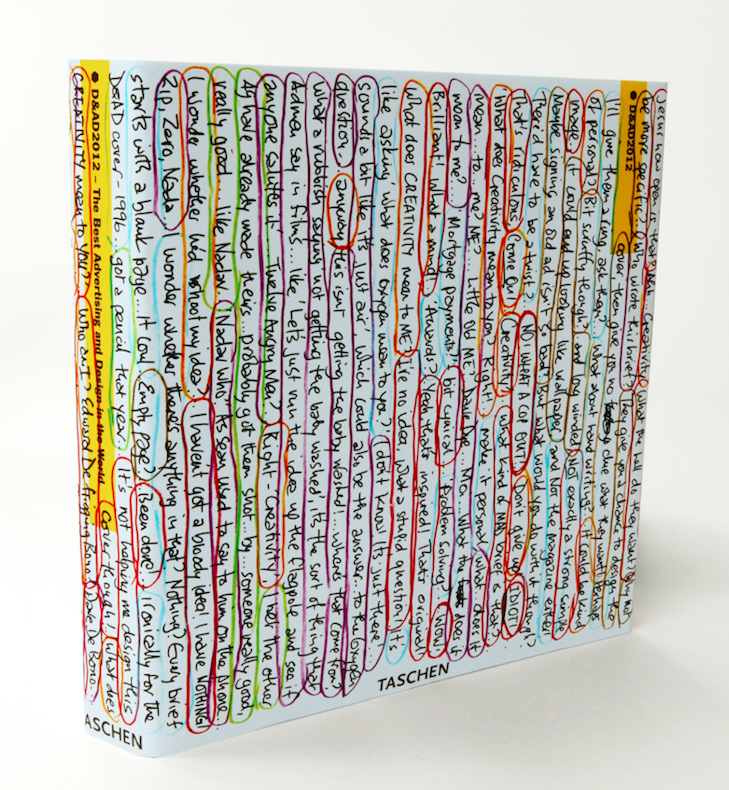 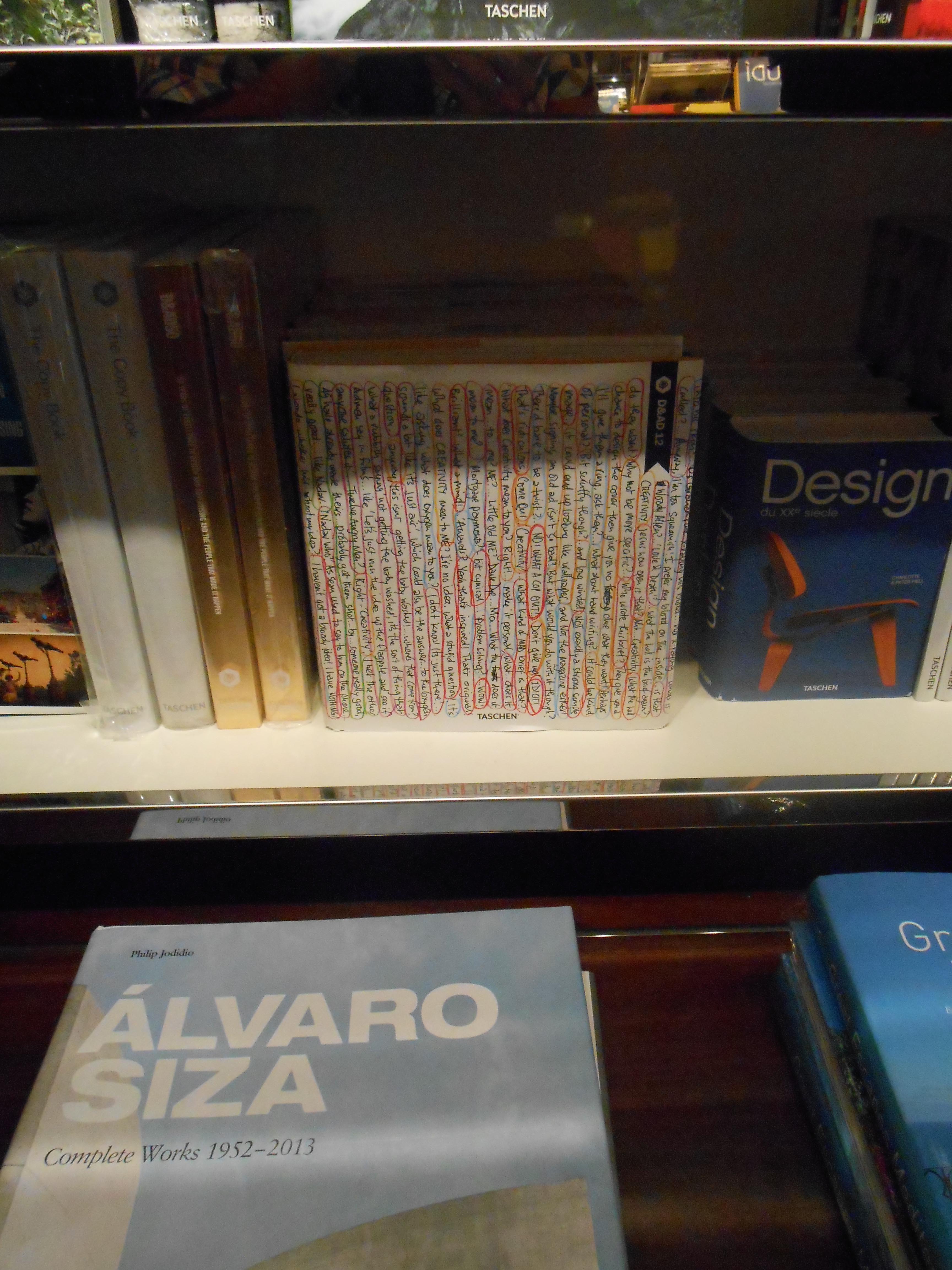 I guess the moral of the story is; BE YOU.
Because sometimes it’s better to look inside rather than out.
You’re unique.
I’m stopping now, I’m starting to sound like a hair-care commercial.

Nb. When I designed the 2004 annual I modestly buried my credit in a sea of names.
A few years later the designers of the annual credited themselves on the front cover. 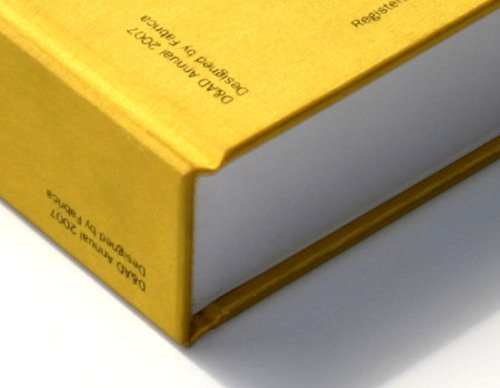 I thought if I ever got the chance again I’d be less modest. 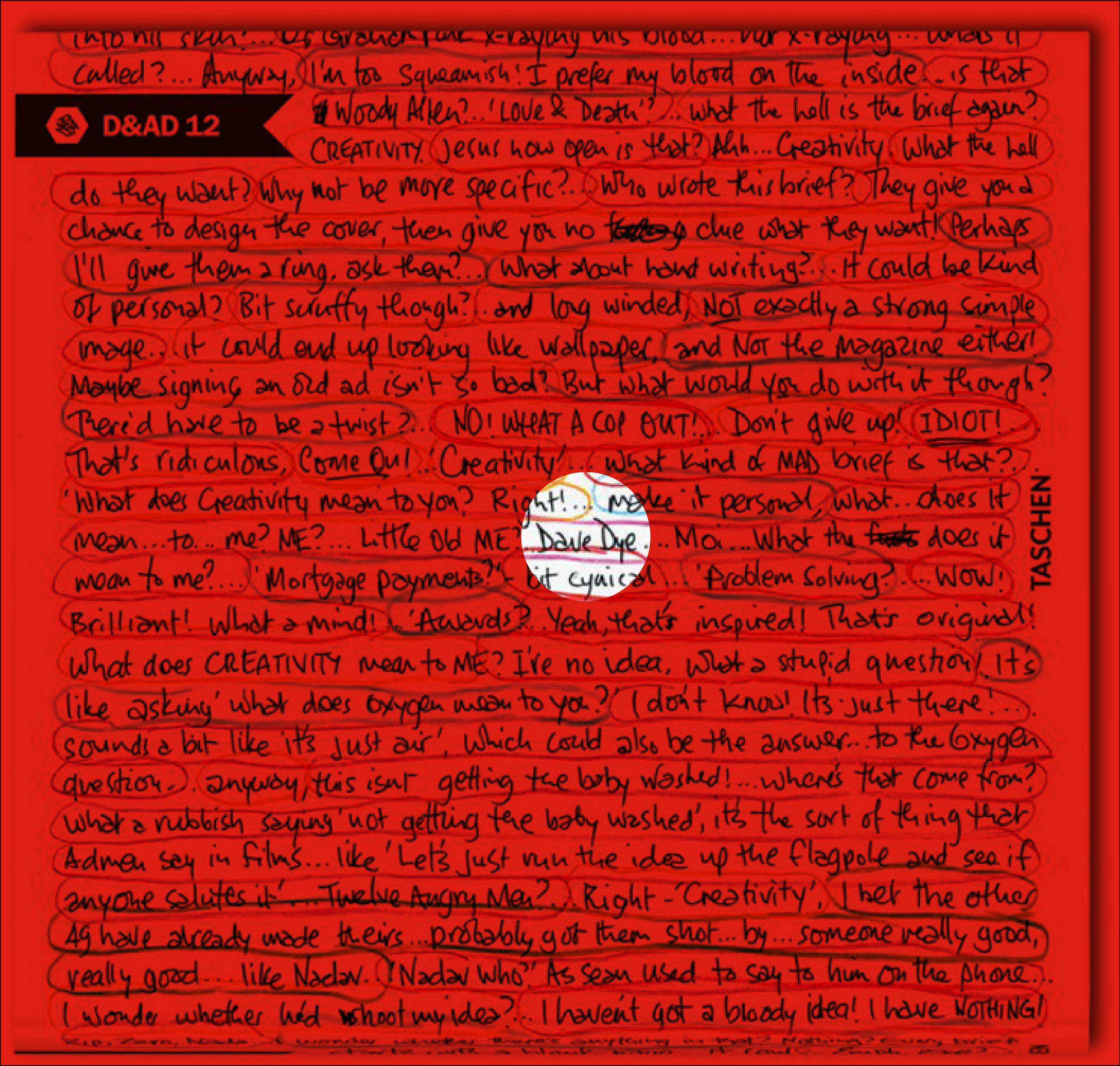