Every so often, a newspaper or magazine will call up asking for some ads.
These can be anything from ‘If drugs were legalised how would they market themselves?’ to ‘How should banks communicate post 2008?’.
Strangely enough, one such brief helped me secure my first job in advertising; ‘How would Vets advertise if it became legal for them to do so?’.
(The concepts below ran in Marketing Week, probably helped turn my trial into a job.) 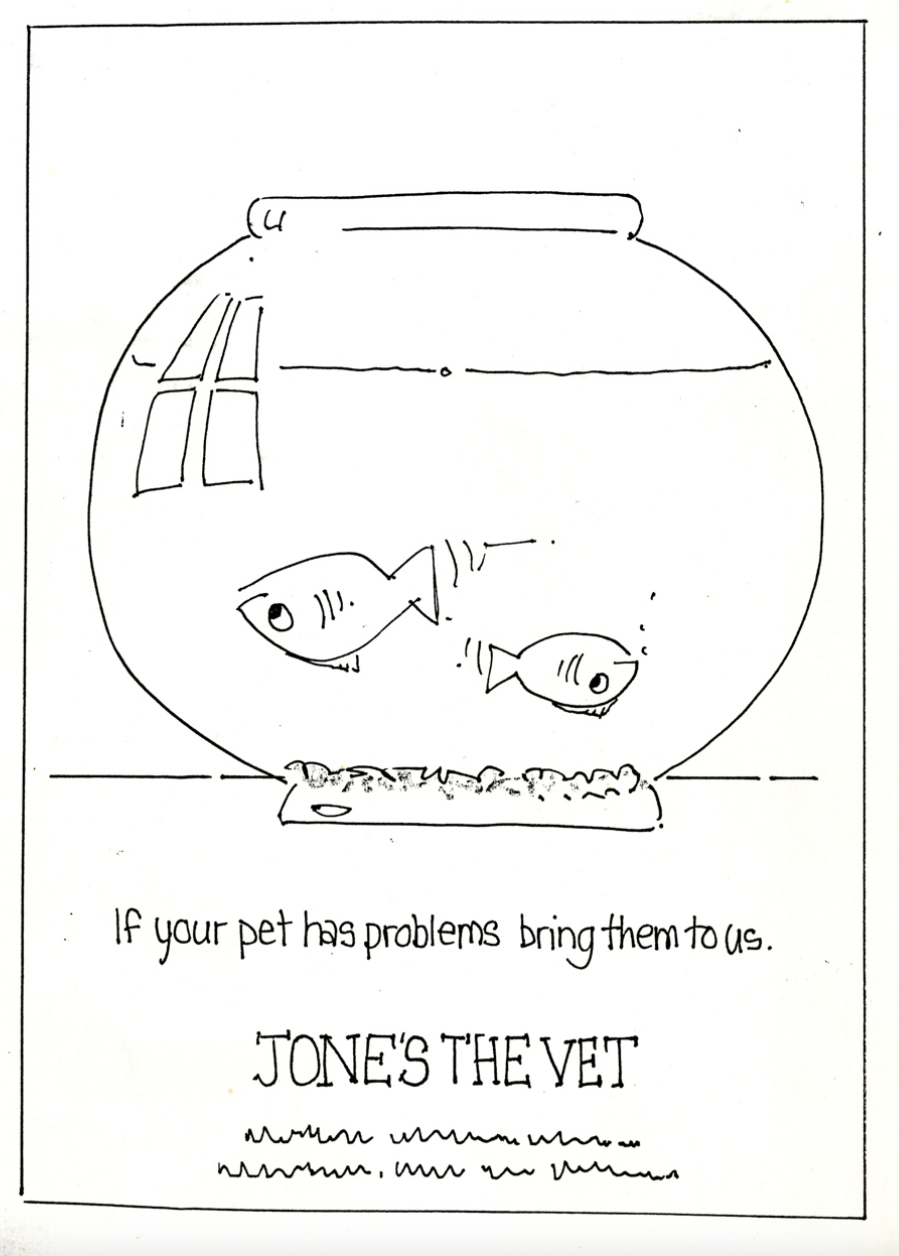 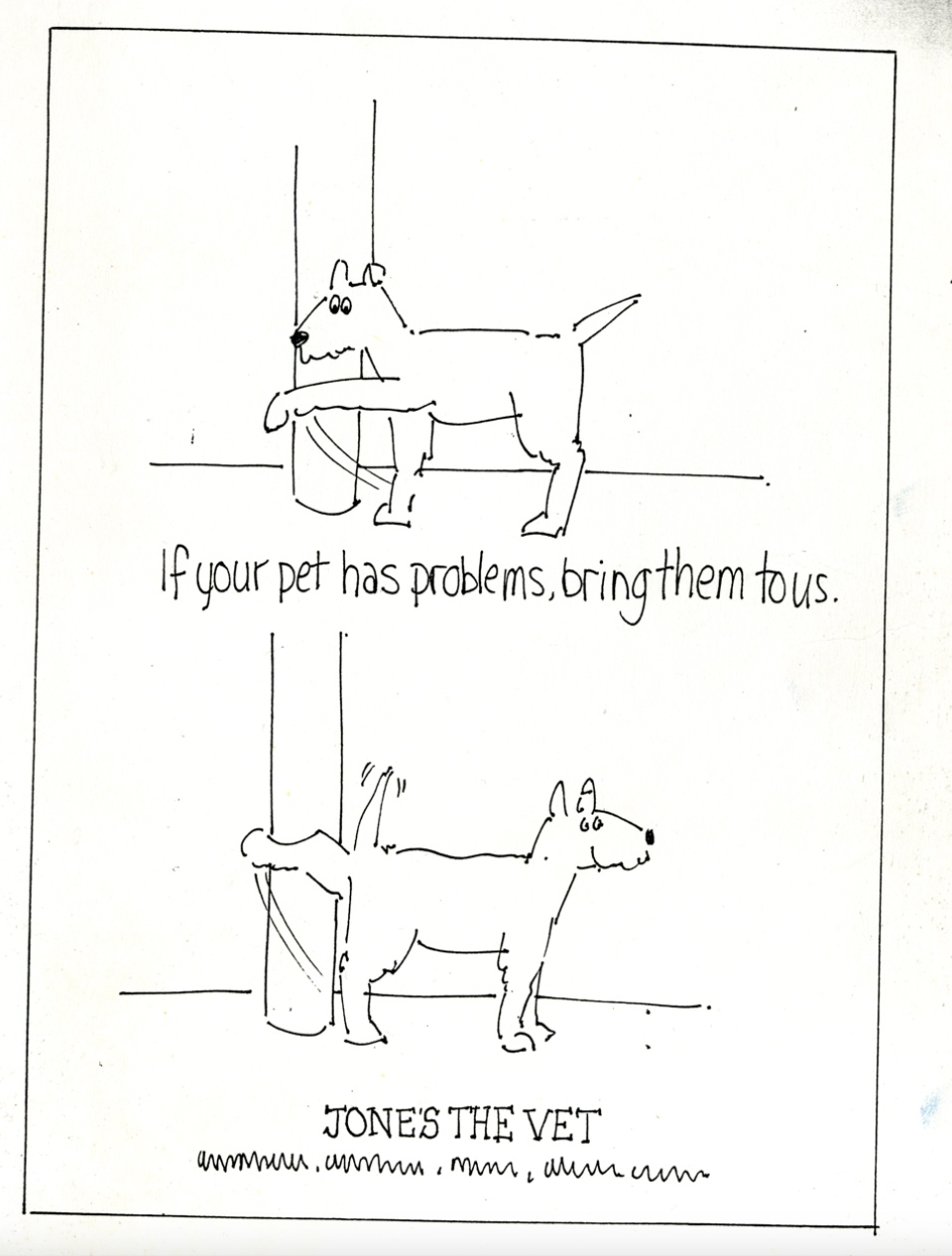 (Hang on a minute… ‘How would vets advertise if it became legal for them to do so?’, was it ever illegal for Vets to advertise? I guess it must’ve been, how weird is that?)
Anyway, back to the point; ‘What would happen if the Government stopped trying to scare smokers and talked to them like adults?’ The Observer asked.
We fully understood the question, we’d tried to scare the shit out of smokers whilst at AMV/BBDO.
The most effective Anti-Smoking campaign produced at the agency focused on how it affected your looks.
Which as a non-smoker seemed insane Death? – ‘Fine’, Lung cancer? – ‘Whatever’, Gangrene? -‘Sure, no biggie’, Dry Skin? – ‘Whoa! Dry Skin? Now that I can do without!’
The point was, smokers aren’t daft, they know the risks, lecture them and they switch off.
So with The Observer brief we thought we’d remind them of the dangers by accentuating the positive, to the point of being downright silly.
Tonally we wanted to be more like a mate down the pub ribbing them than a authoritarian figure talking down to them.
So we created a fake brand ‘NOTHING’ and advised people to smoke it, lampooning kitsch advertising cliches. 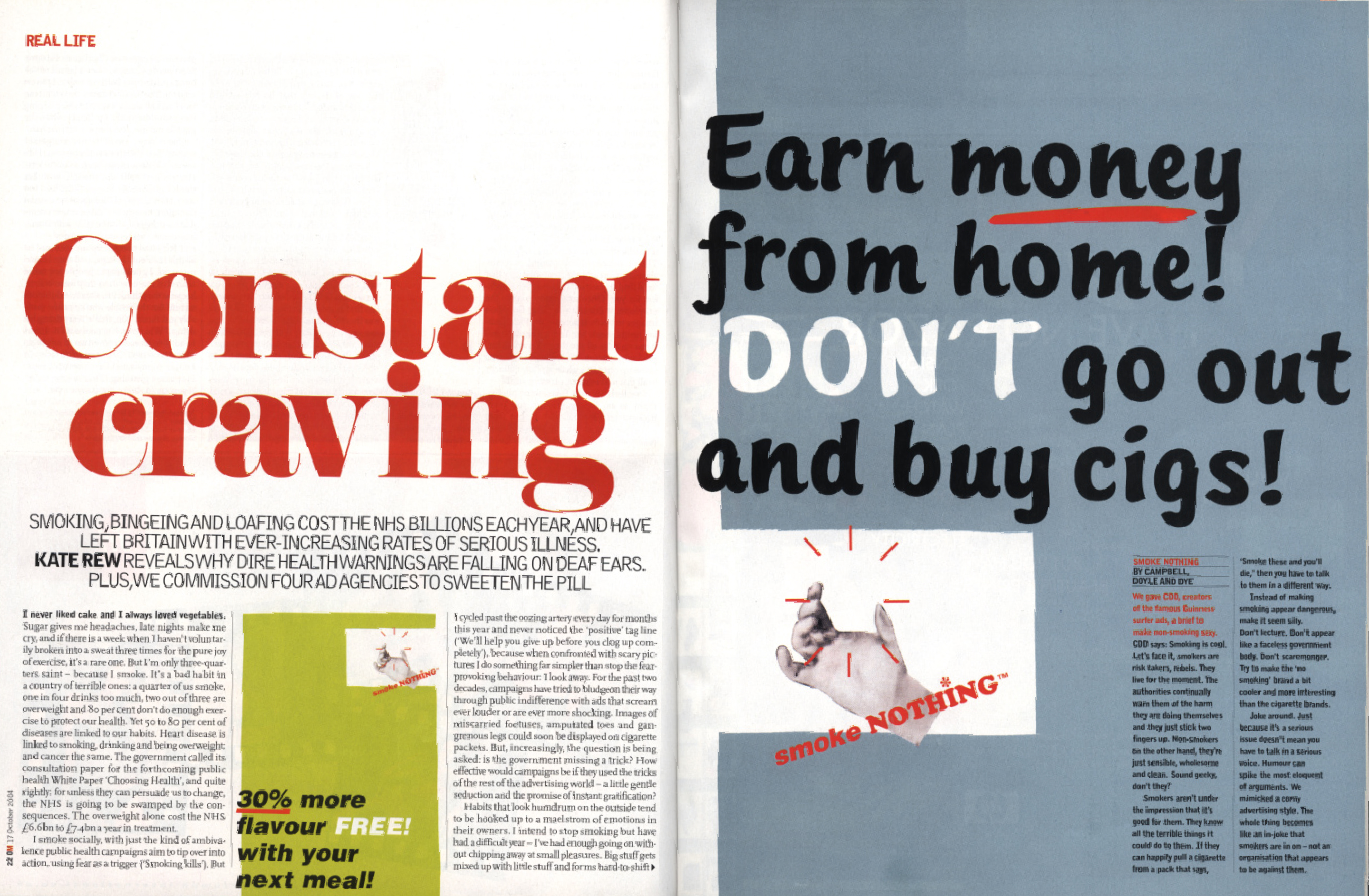 About a week after the magazine came out, someone called from the NHS, the North ‘We saw your posters in The Observer, can we have ’em?’
Fantastic!
They ran in the East Midlands as 6 sheets.
A lot of P.R. was generated  as the approach was seen to be different, resulting in the chap who’d called us talking about them on a several radio shows.
No money changed hands, but everybody won. It seemed. 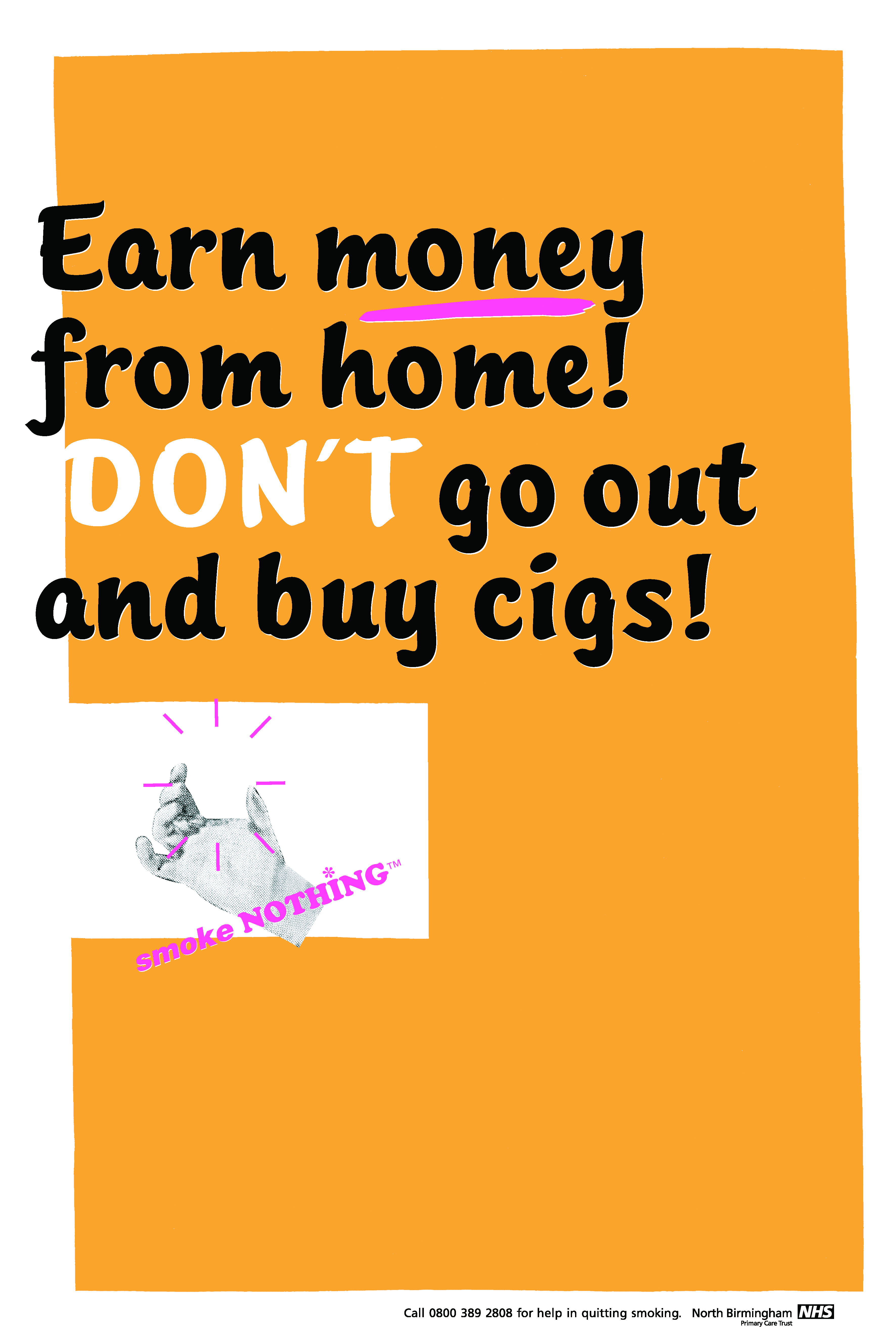 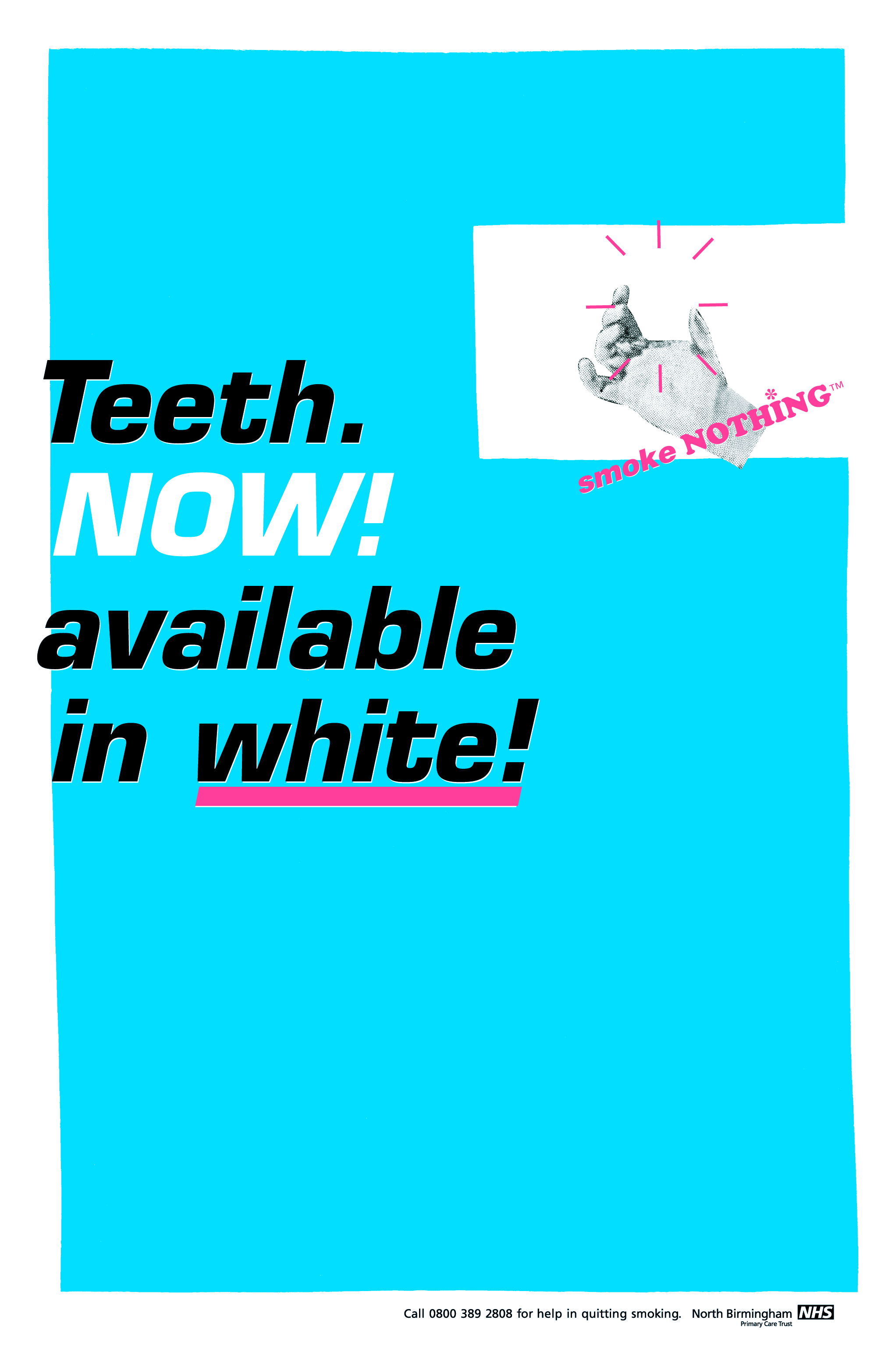 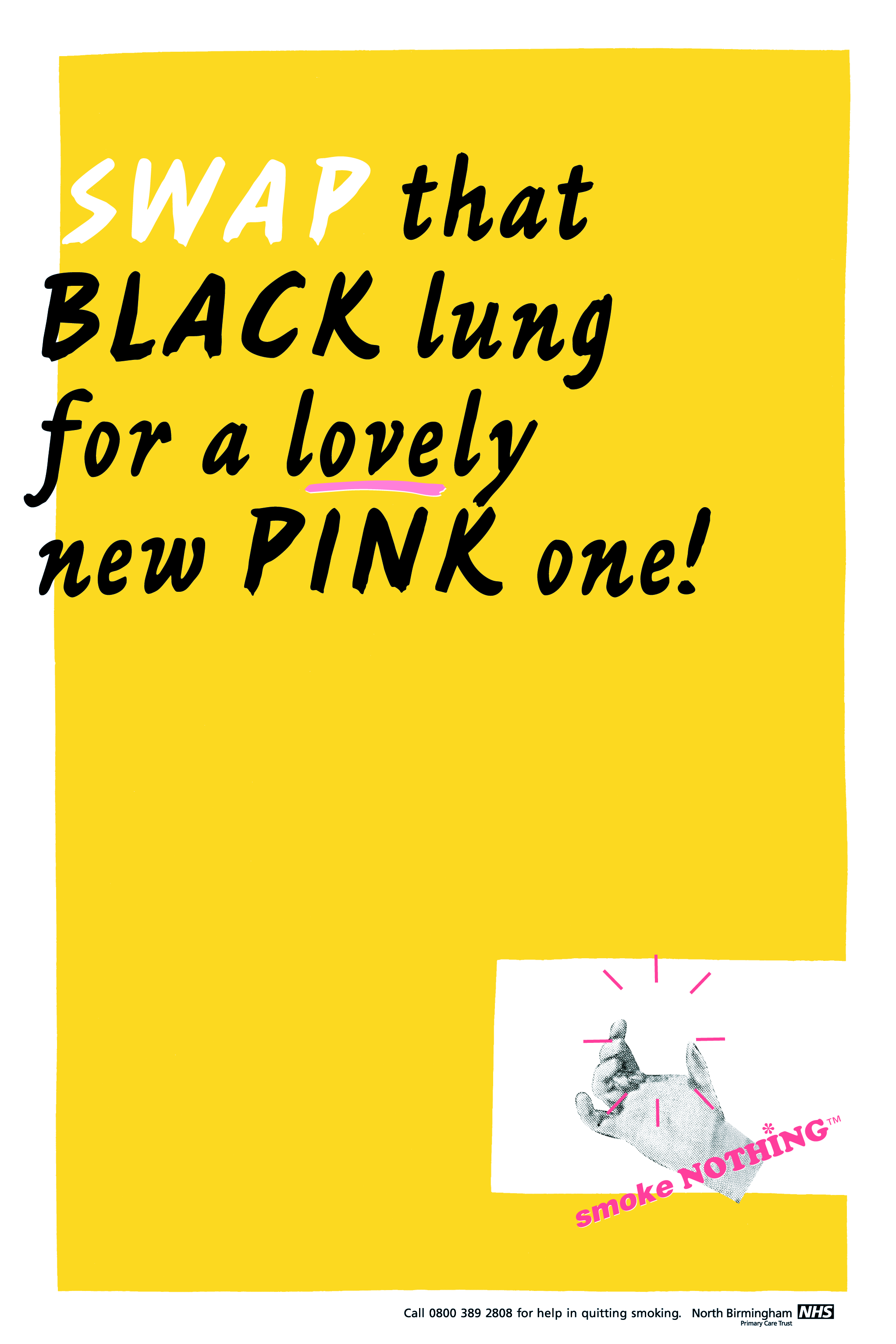 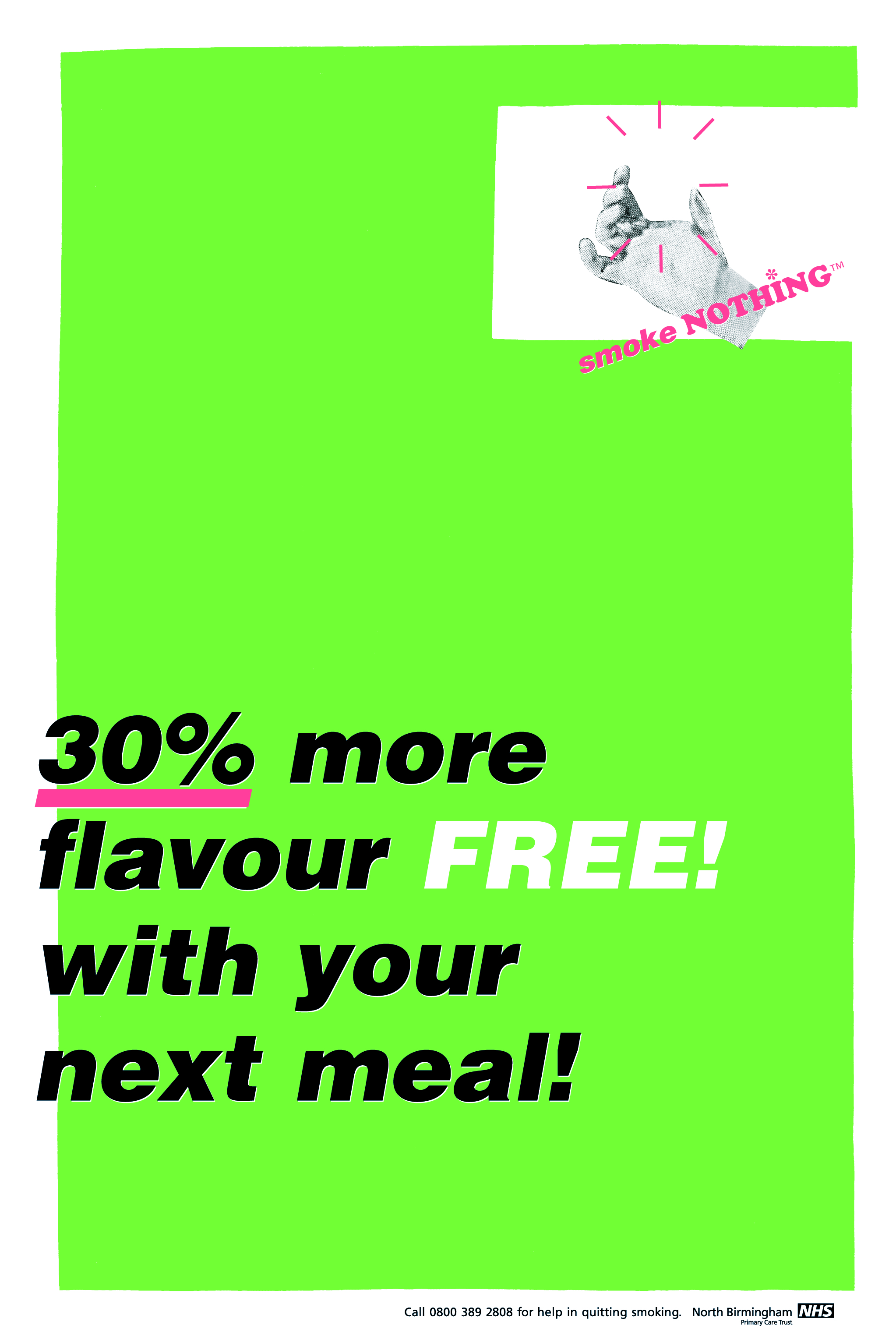 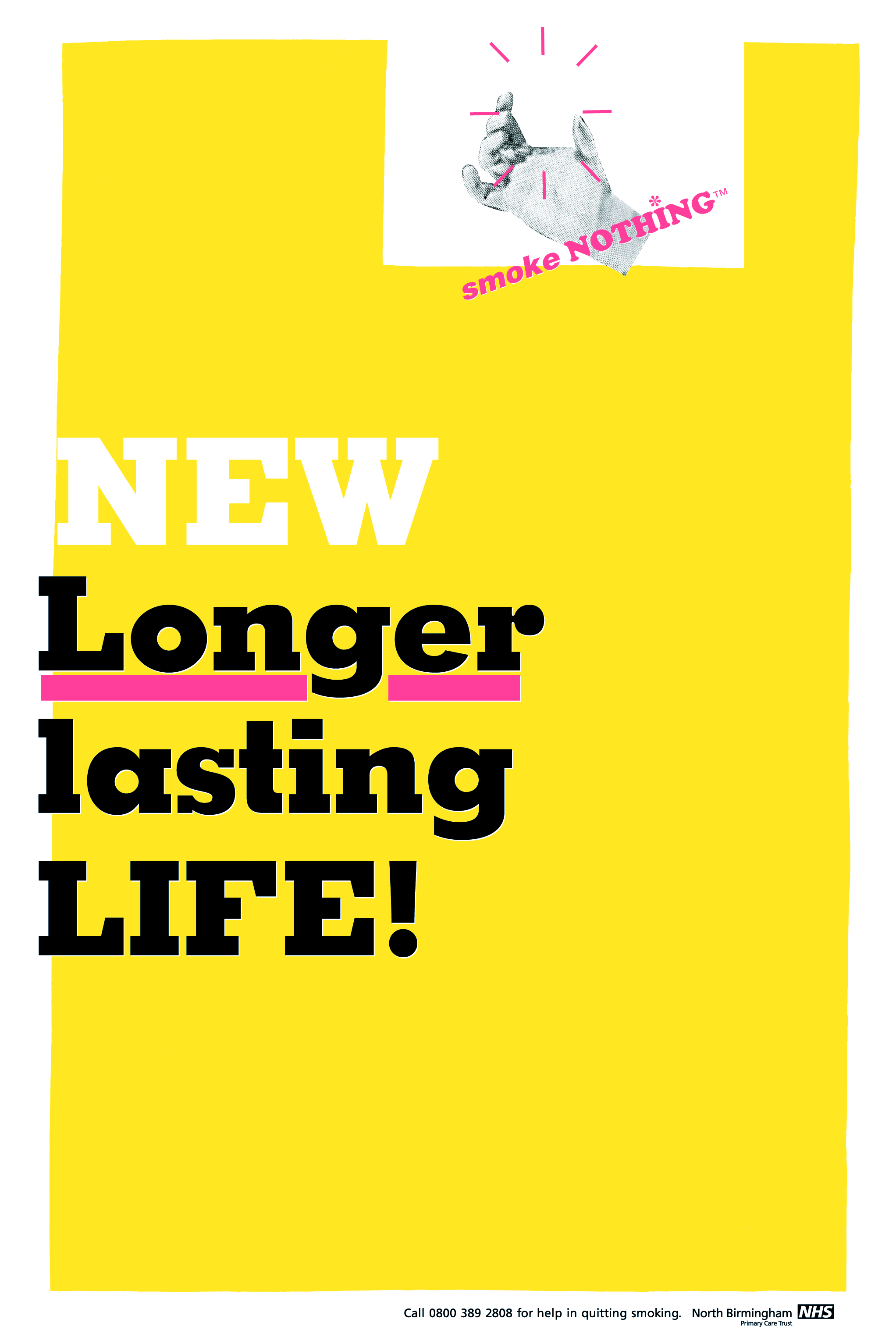 One year later the C.O.I. came in to check out our creds.
(Every four years or so they’d troop around all the new agencies, generally pick two new, interesting ones, and kick off a couple that weren’t working out.)
CDD were seen as interesting, probably because three out of the three names over the door were creatives, also, we’d all worked with the C.O.I. at previous agencies.
We had a great meeting.
The feedback was that they really liked CDD because we were creative and ‘interesting’, we were down to last three, they were looking to put two on the roster. Good odds.
Another meeting was arranged to meet a larger group of C.O.I. bods.
Another great meeting.
It appeared to be a done deal.
Then we thought we’d share this news with them: ‘‘We’ve already worked together’’
‘‘Really? How so?’’ said the man from the Ministry.
SFX; Drumroll, ‘‘We did these...for FREE!’’
They didn’t seem quite so delighted as we’d imagined; ‘‘Oh, and who did you do them for?’’
‘‘The NHS…North Birmingham.’’ we replied.
‘‘We can see that, who were the individuals?’’
Slightly thrown by the sudden change in room temperature, we offered up a
name, maybe they were chums?
They all scribbled it down.
The meeting ended shortly after.
We didn’t get on the roster.
If you’re not in the creative department you probably understand why, but for those in creative departments, here’s why; Those guys sole job to decide who the C.O.I. does and doesn’t work with.
The last thing they want is some renegade agency busting their system.
Doh!