BRIEF: Dads need a break, Volkswagen Sharan’s roomy interior
is the perfect for them to enjoy a bit of ‘me time’.

The Sharan was essentially a transit van with windows cut out of the side panels and seats welded into the back.
A Creative Director’s job isn’t to just oversee the creative work, it’s to be the conduit between the creative and other departments.
So, if a brief comes in that you don’t think you can turn into credible creative work, it’s your job to flag it up.
Sean is the consummate Creative, he believes it’s his job to create, he’s not too fussed what the strategy is, he’ll turn it into good creative work, ‘Shoes you can eat? Cool, when do you need it by?’
I’m more logical, to me, if I’m asked to sell something it’s like being asked to walk into a room filled with suspicious people to try to convince them I have a good product.
If the argument I’m given doesn’t sound credible I worry I might get laughed out of the room.
I can’t remember whether I challenged the Sharan brief, if I didn’t it would’ve been because it was the first we were given upon arriving at BMP/DDB.
We gave the brief to one of the better teams in the department, they were given two weeks.
They went right up to the wire, the night before the meeting, then came in and said “Couldn’t really think of anything…Soz.”
Two weeks earlier we’d been at Leagas Delaney, you’d be given days, sometimes hours to crack a brief, ‘Soz’ wasn’t an option.
You had to deliver creative work.
Meetings were never cancelled due to lack of creative work.
At BMP/DDB cancelling meetings due to the brief not being cracked was common.
To be fair, it probably resulted in better work, we just hadn’t acclimatised yet.
So, having no work to present in the morning we stayed until midnight ‘writing our way out of the problem’, as Tim Delaney used to say.
The next day we reflected on what we’d written the night before.

IDEAS.
We took the issue head on; maybe it’ll save your marriage. 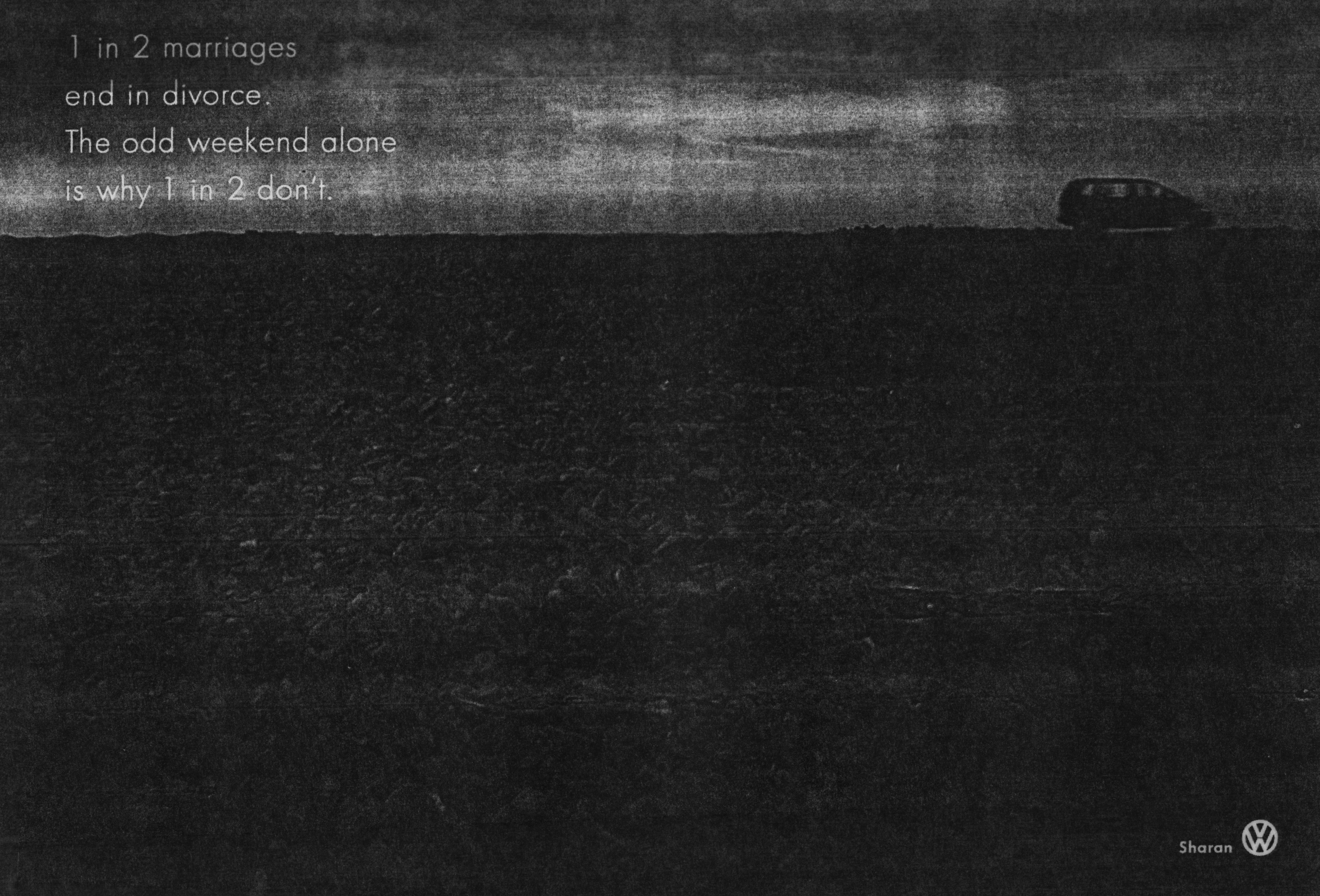 Too serious, we rejected it. 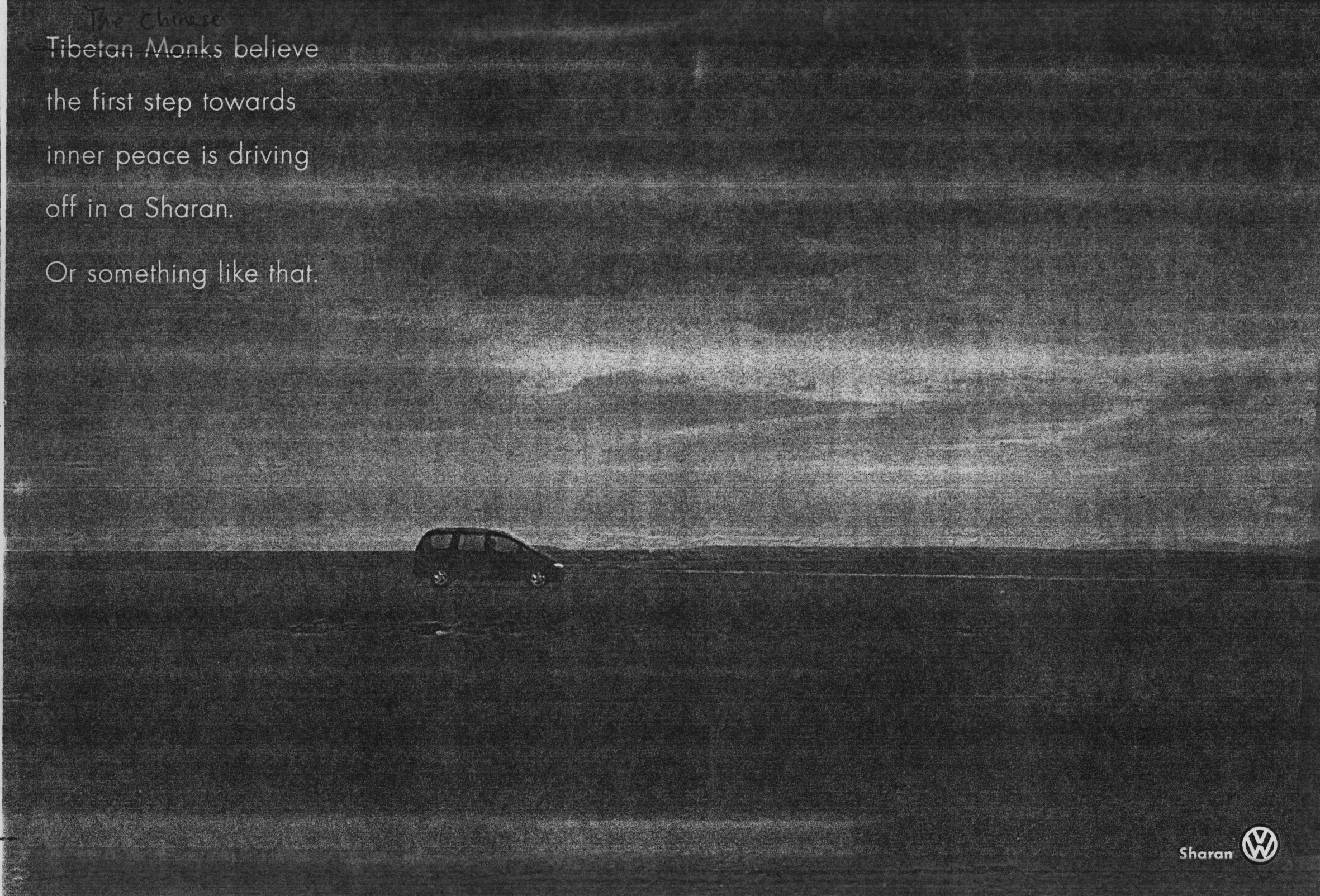 We were joking, but pulling in Tibetan Monks felt a bit too contrived. Rejected.

There seemed to be something odd about this basic vehicle and it’s non-basic price tag. 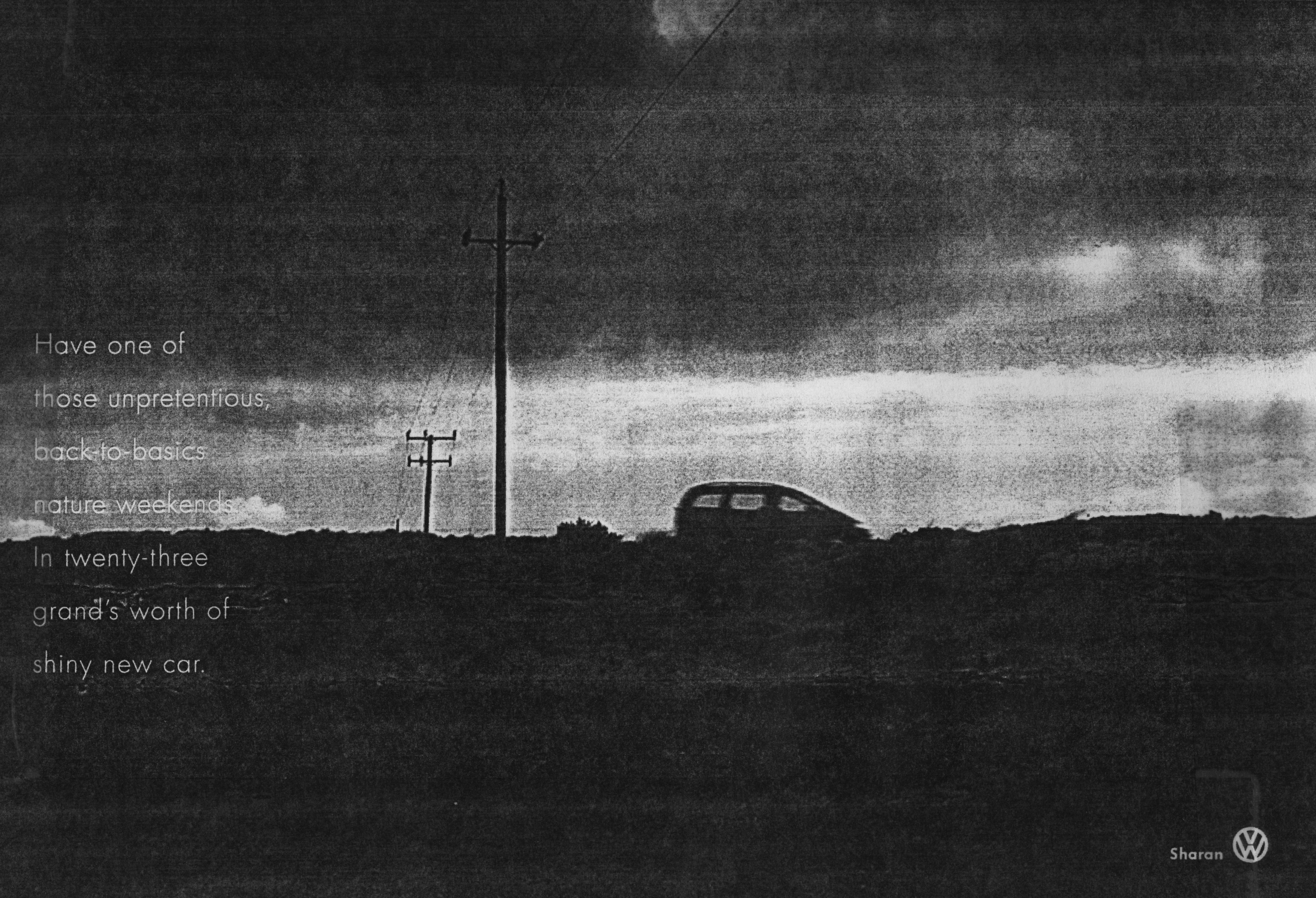 We were torn; was this honest, self-deprecating, Volkswagen style humour or just a smart arse ad? We think the latter, we reject it.

Maybe we should big up some product detail? 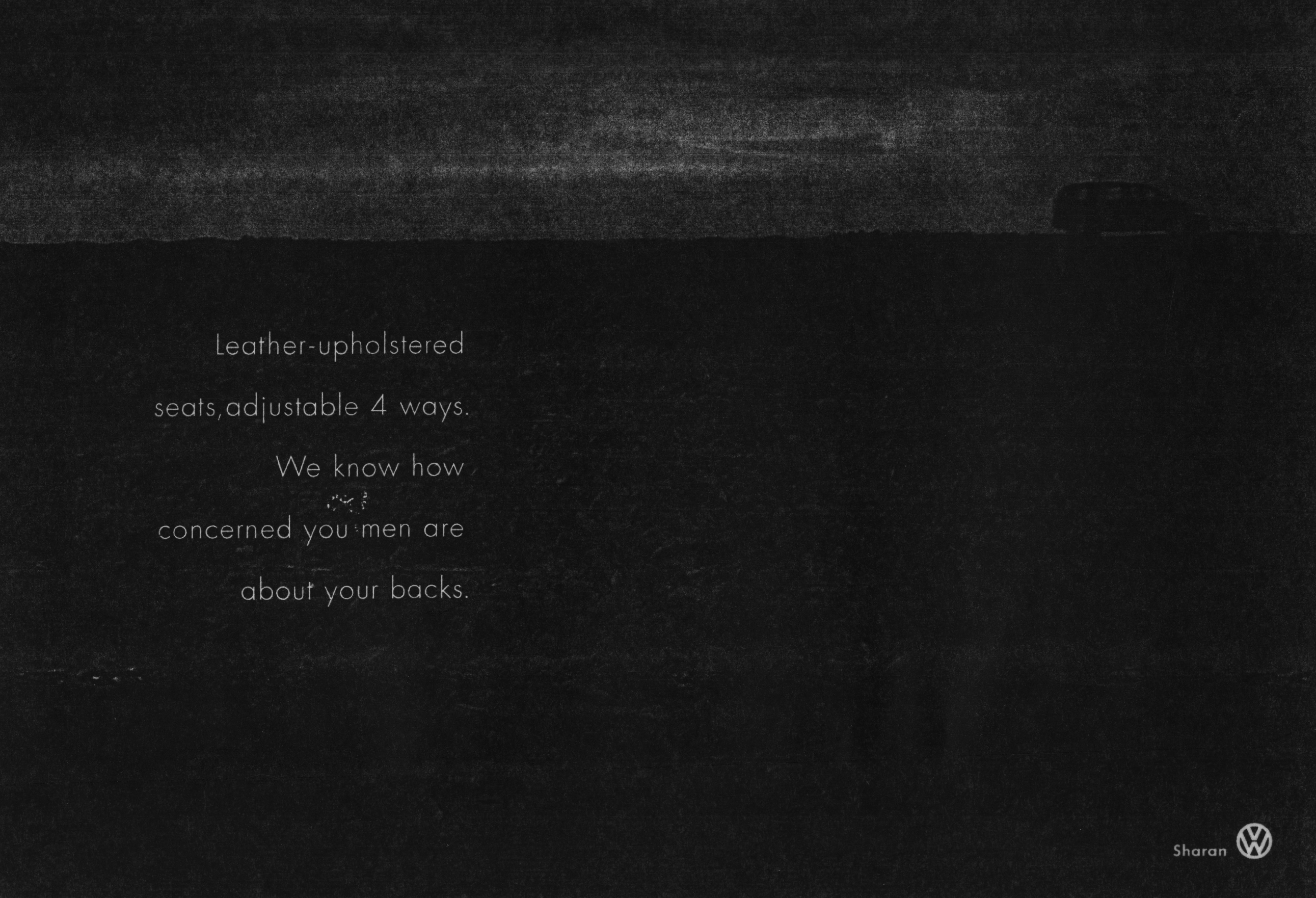 Nope, we’d wandered into the business world, it felt more like The Economist the Volkswagen. Rejected.

Maybe we just suggest, up-front that it’s a good vehicle in which to take off and to get away from it. 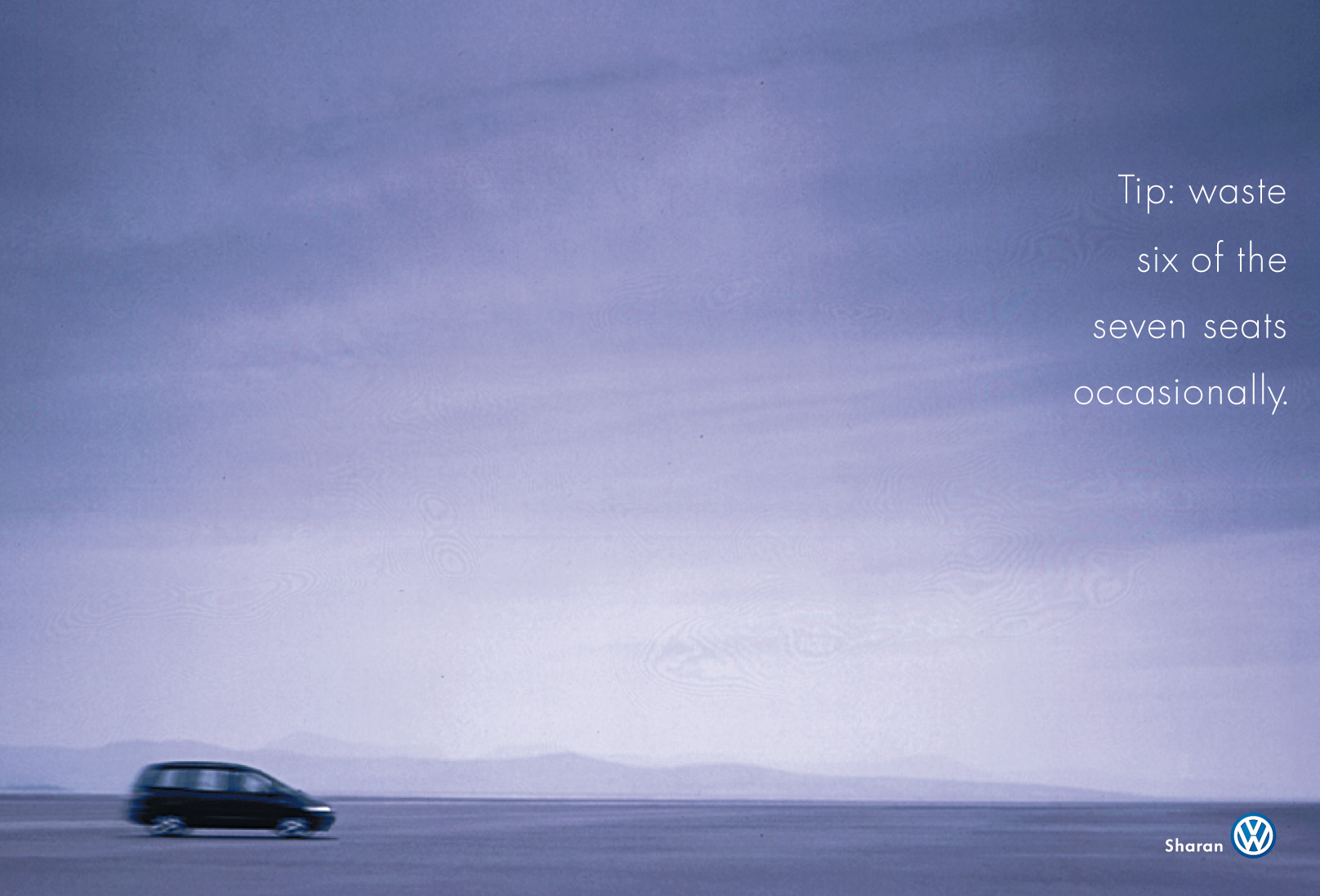 Maybe we say get away from your kids for a bit, have a bit of ‘Me-time’. 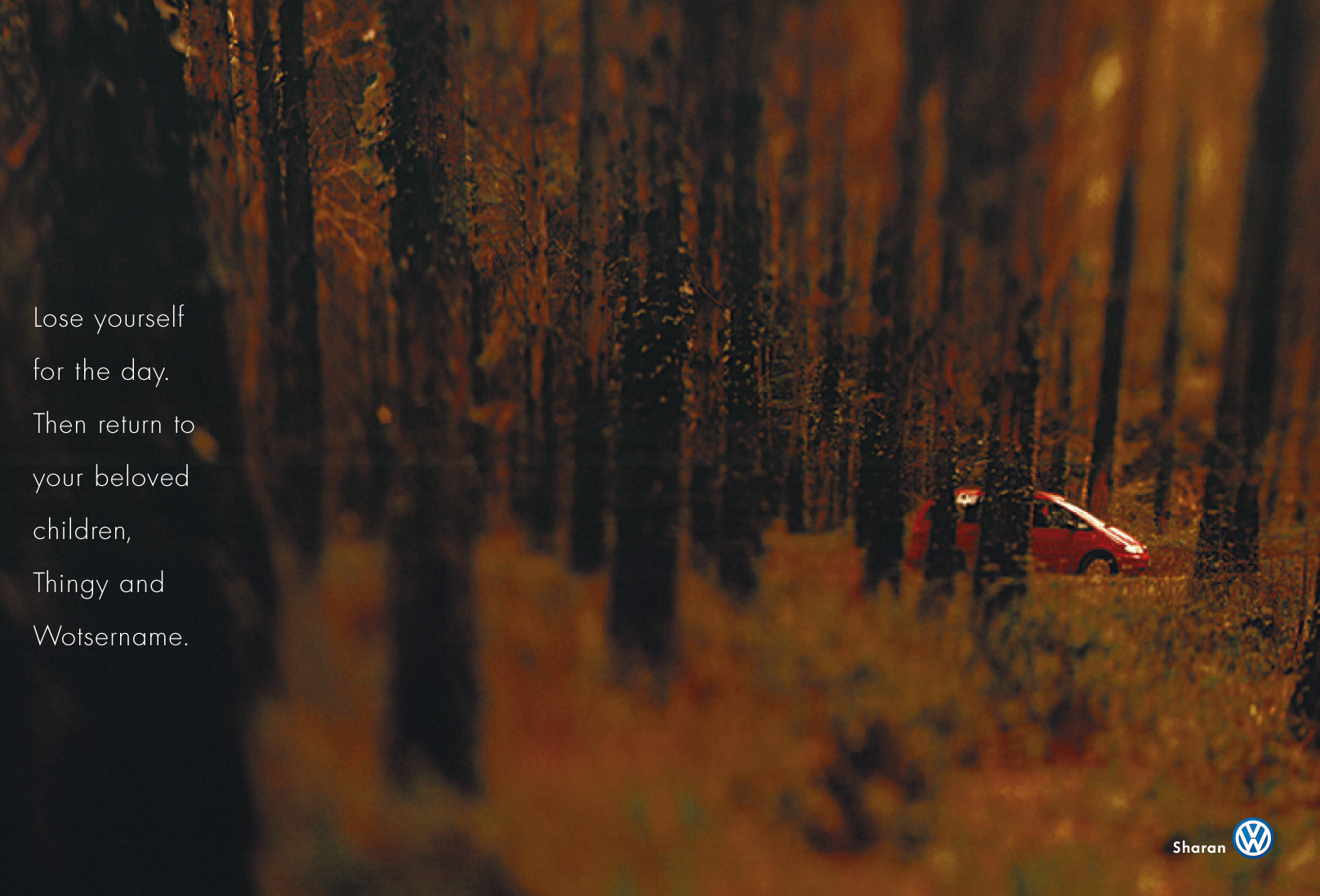 Maybe we talk about the rejuvinating benefits of having a drive sans kids? 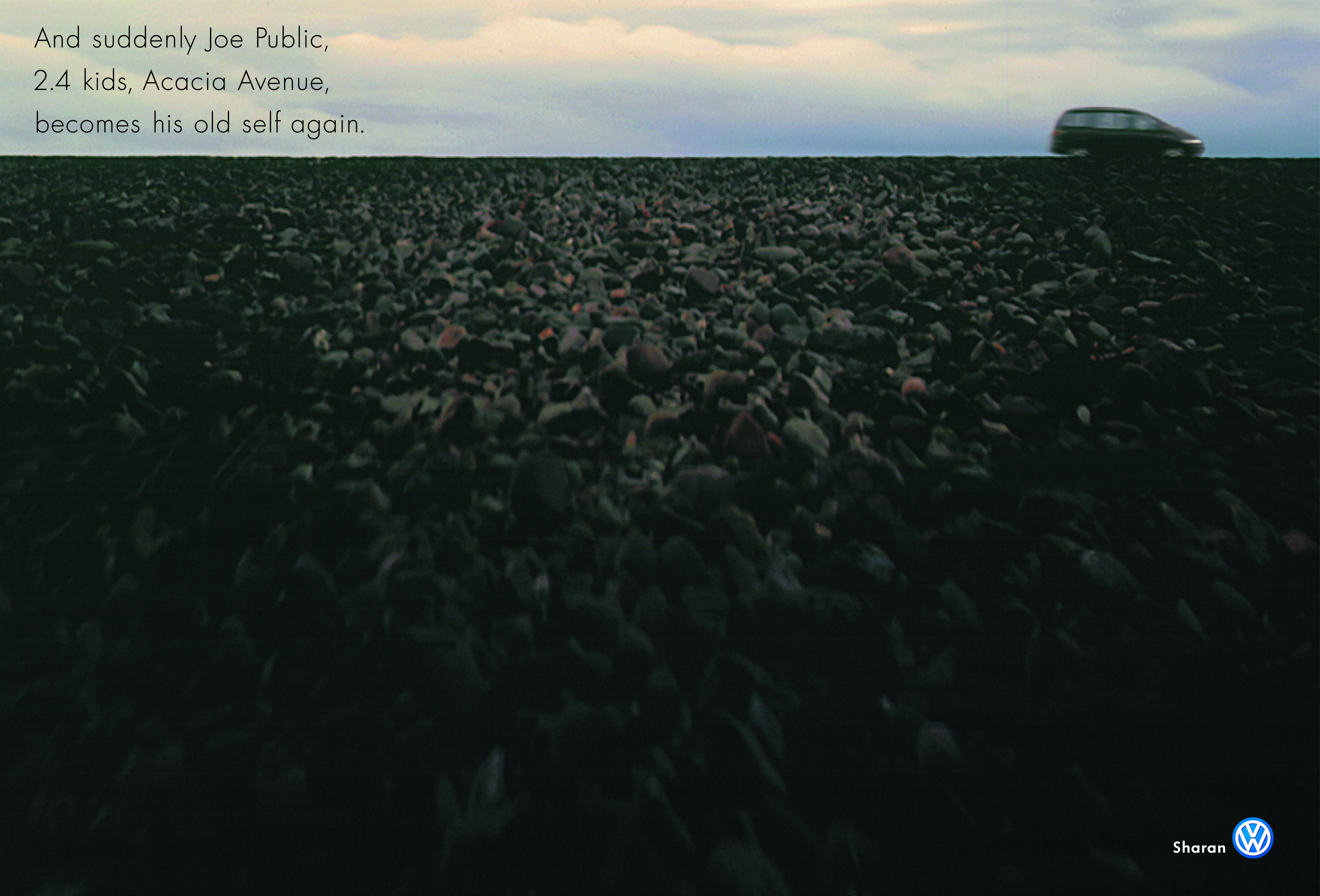 Maybe we just make fun of this goddam, pretentious brief? 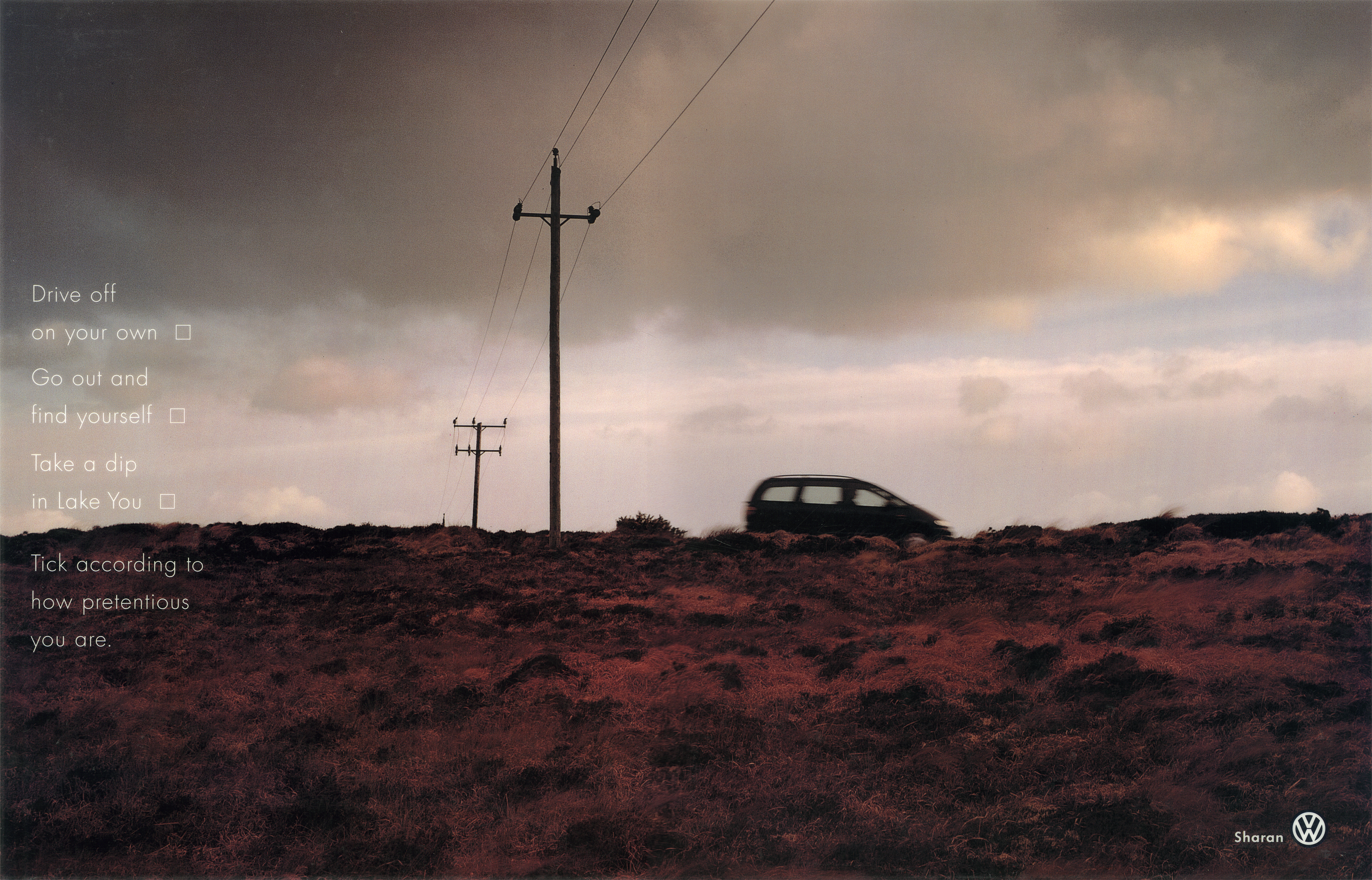 Again, was it honest, self-deprecating Volkswagen humour or two guys taking the piss out of the brief? We weren’t sure, but it made us and the client laugh, so it ran.

The ads were quite nice and even picked up a few awards.
The issue was the strategy, it was, what’s that technical term that strategists use? Oh, I remember; ‘Bollocks’.
Nobody wants to drive around alone, luxuriating in the roomy interior of a glorified van.
The following year the brief came in again, this time with an interesting insight; Buyers traded down from expensive cars for their child’s sake, being seen driving it meant they were seen as someone who put their children’s needs before their own.
Now that sounds true, different and very Volkswagen, (honest and self-deprecating).
Sean and I were both new Dad bit, it struck a chord.
We listed all the things we’d given up or changed for the sake of our children, playing our favourite music for their inane nursery rhyme cds, instead of putting on the new Tarrantino film on a Sunday afternoon we’d dive into a five hour Teletubby-a-thon.
It was easy to come up with examples, we made a long list.
We translated it directly into an idea by using symbolic images. 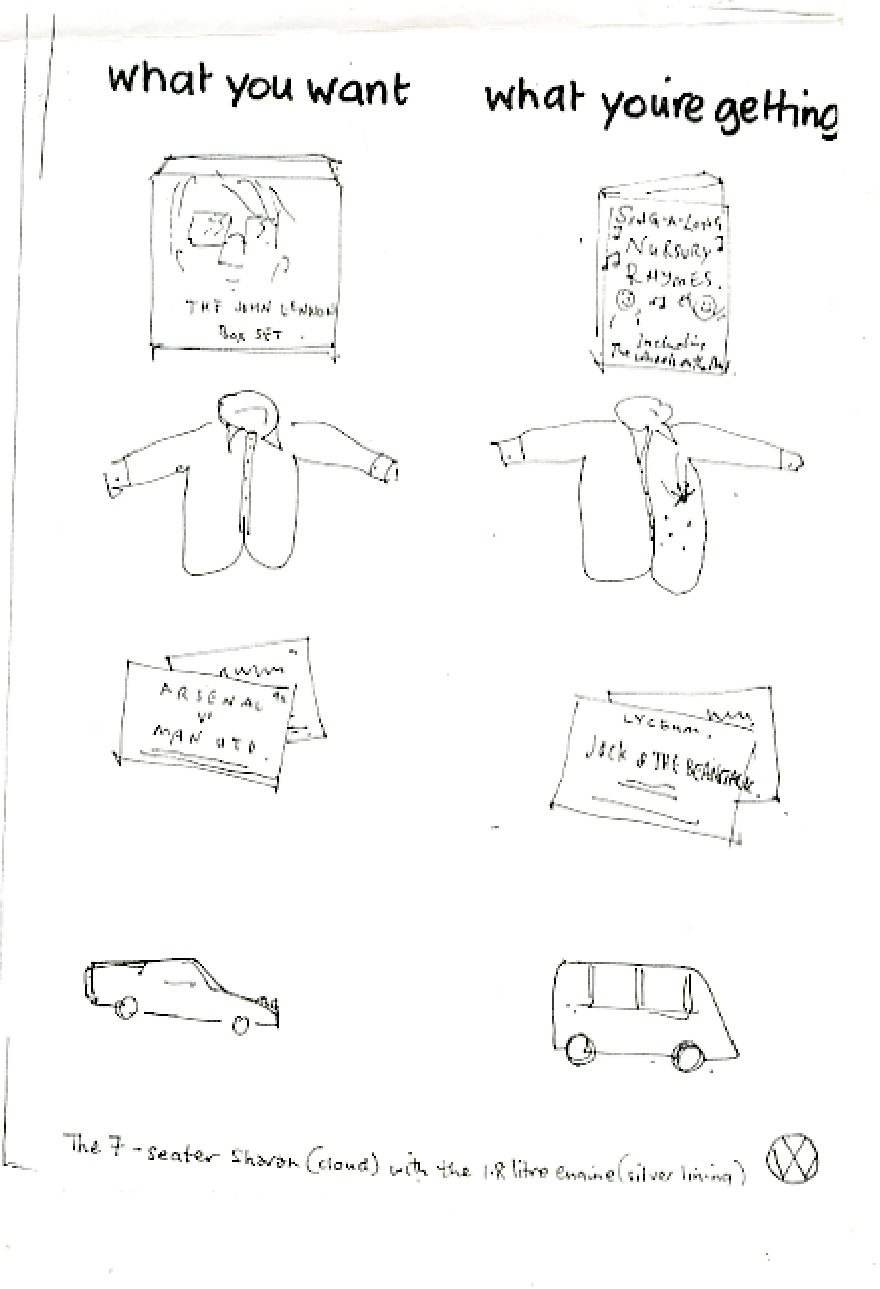 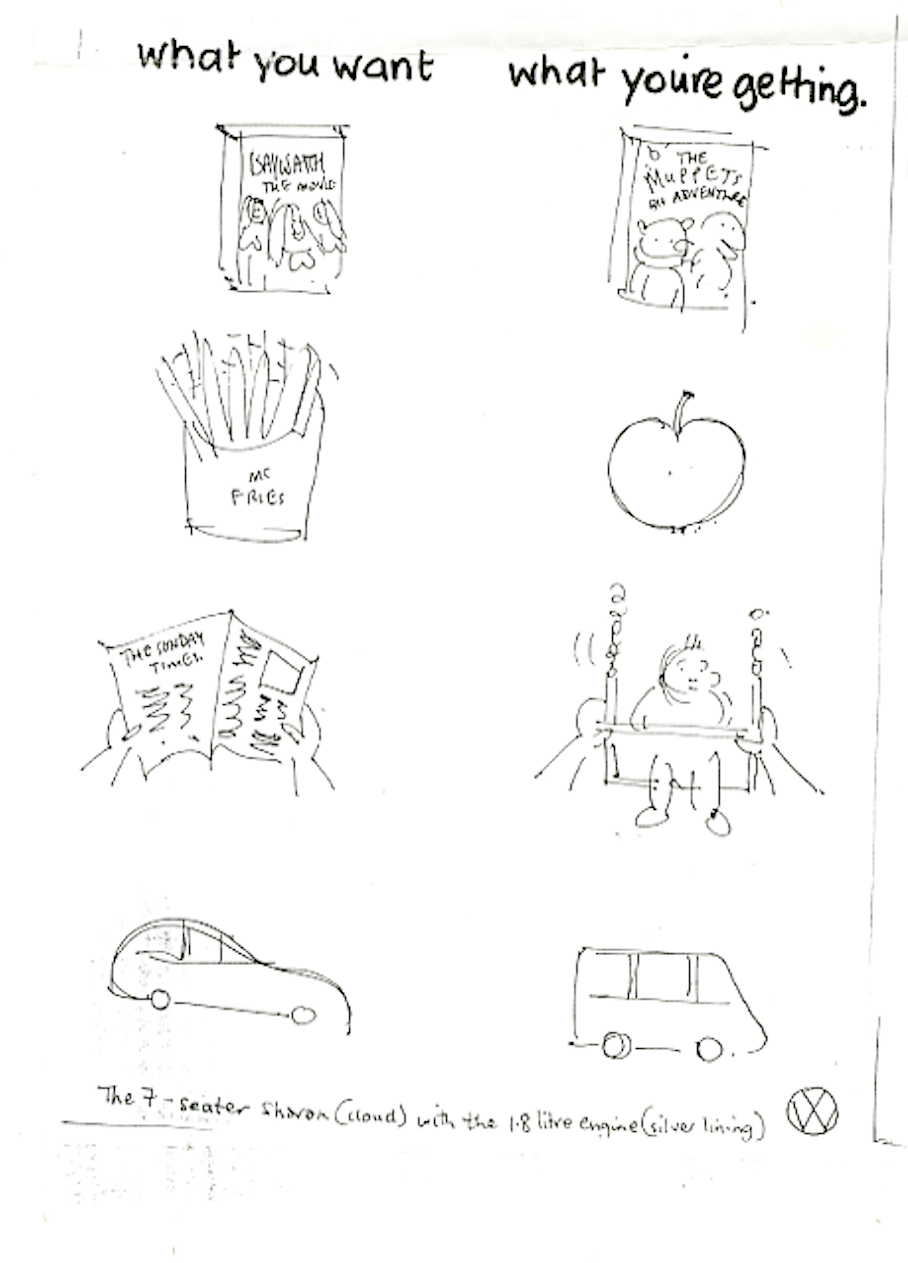 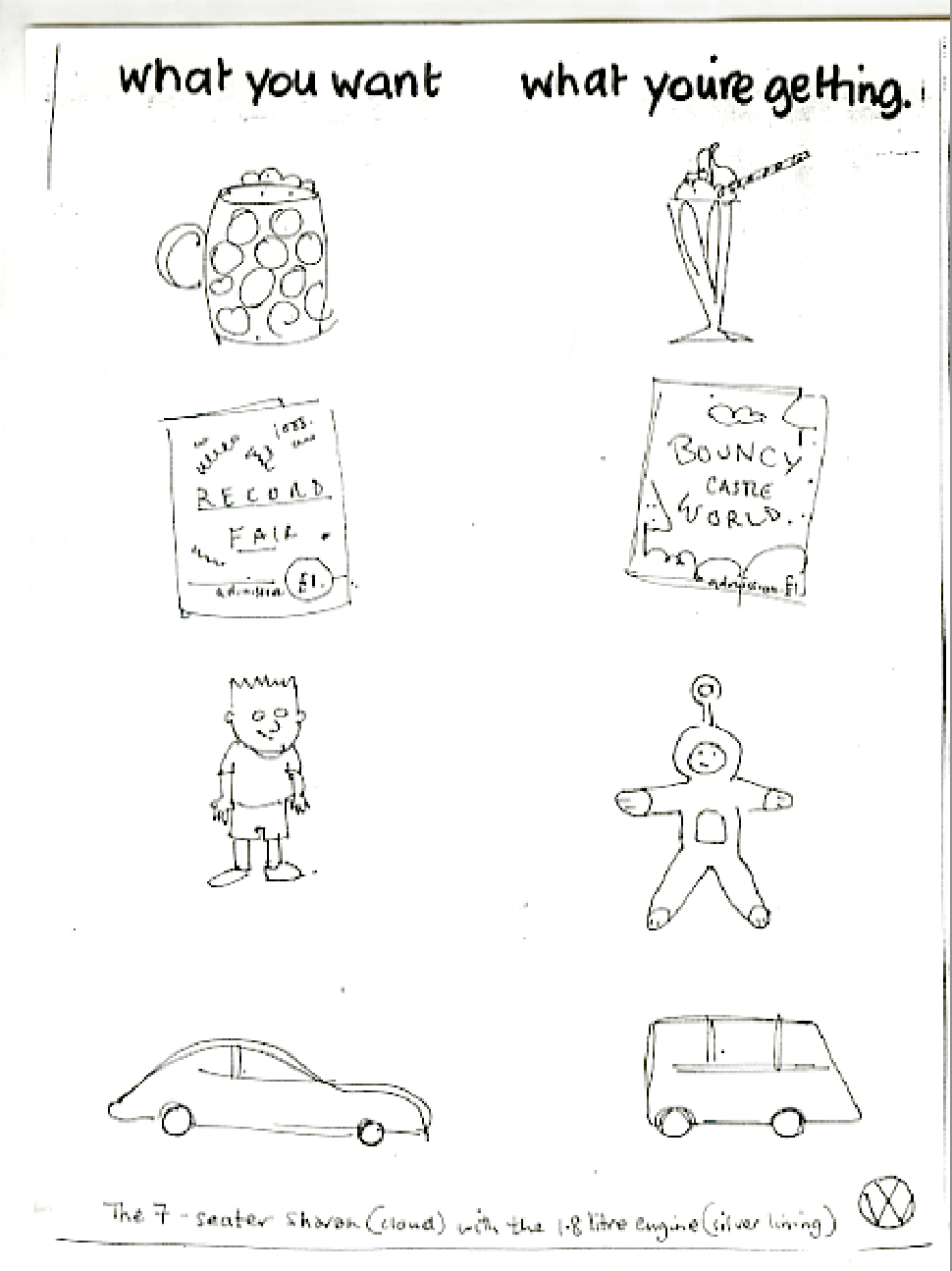 ART DIRECTION ISSUE 1: There are a lot of pieces squashed onto that single page, it means they are a bit small and the ideas have no room to breath.
The client calls, the campaign has gone down really well internally, they’re putting more money behind it. It meant changing the media schedule to spreads instead of pages.
This instantly helps the art direction; ‘What you want’ can be on one page, ‘What you’re getting’ on the other. 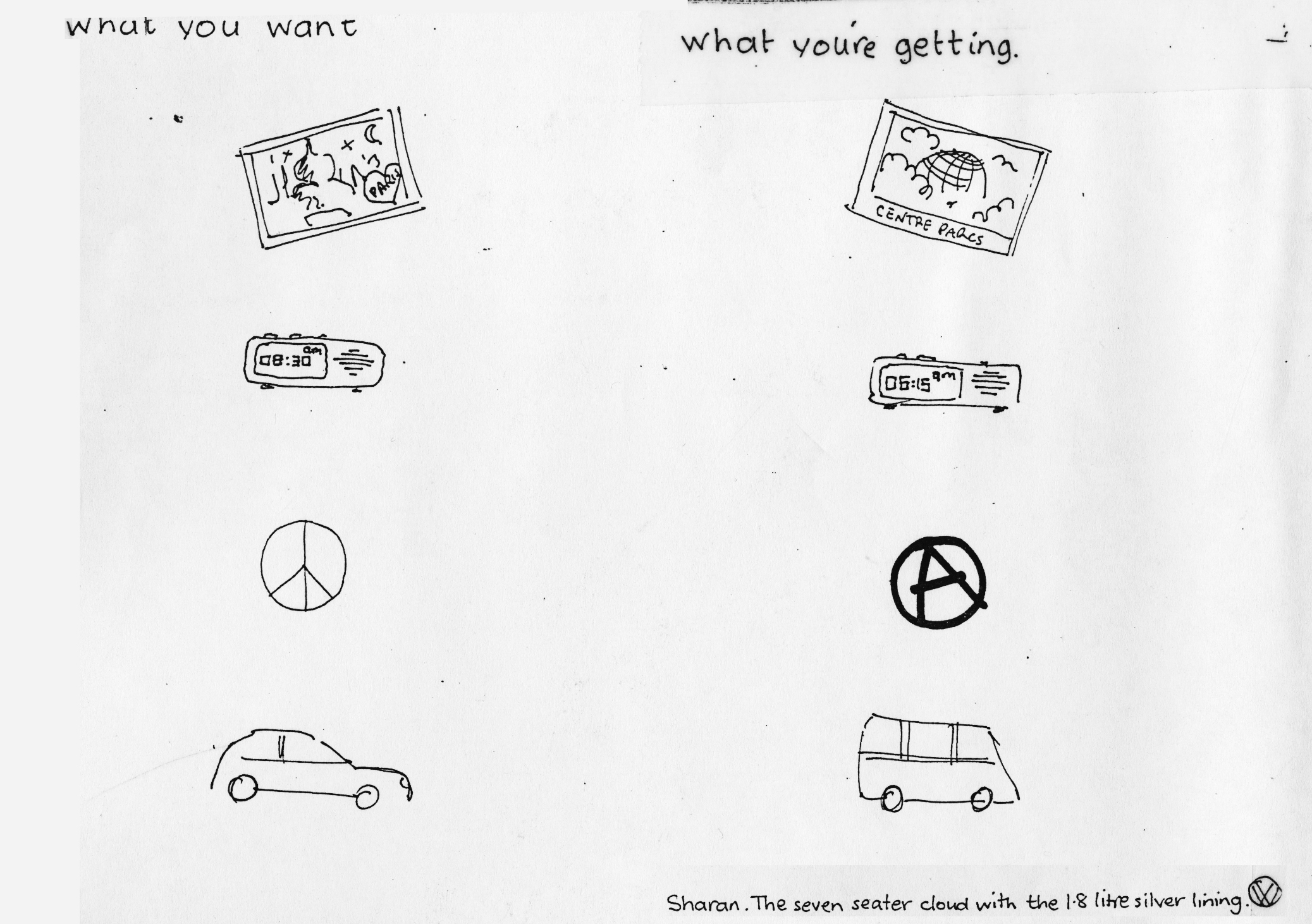 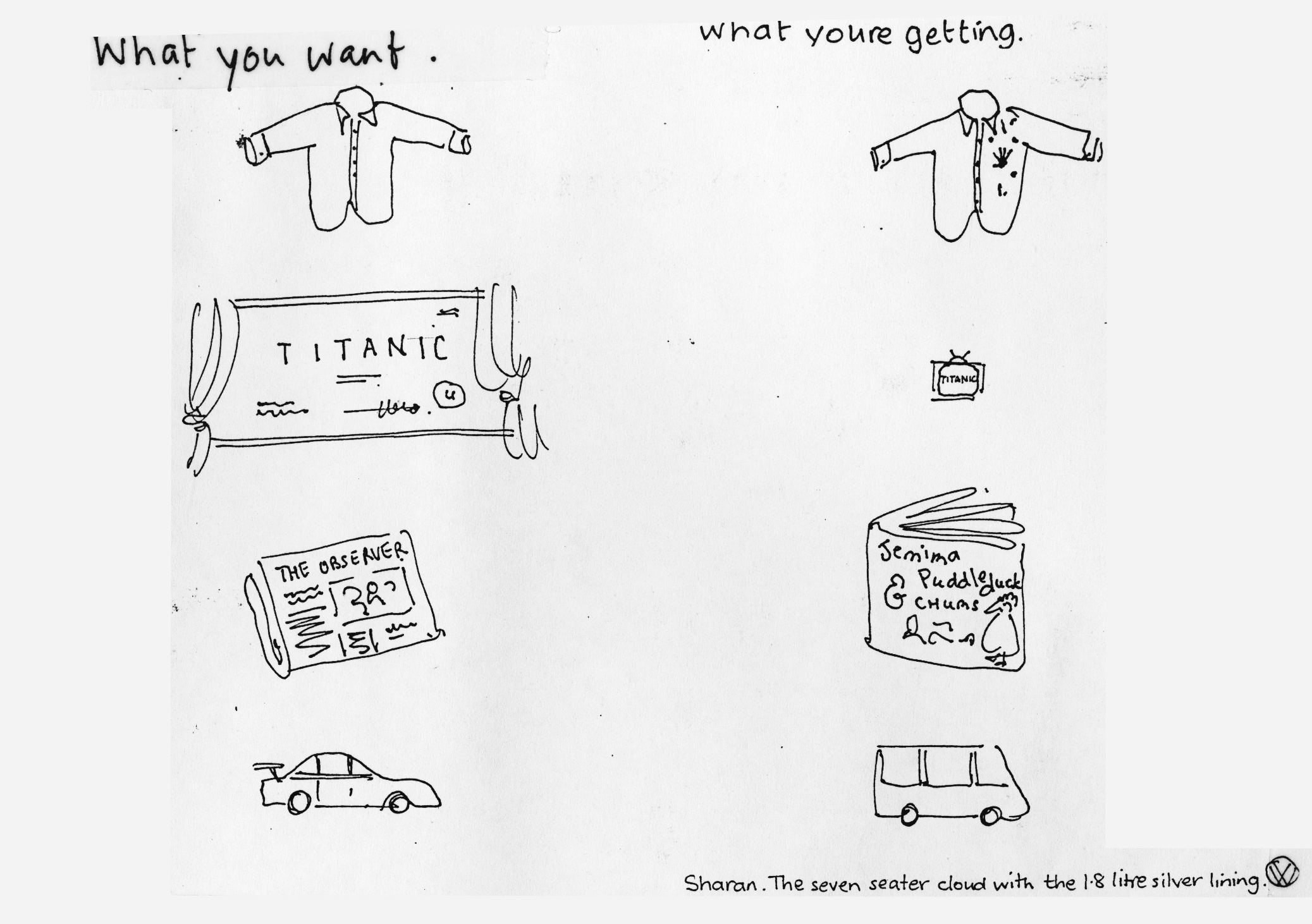 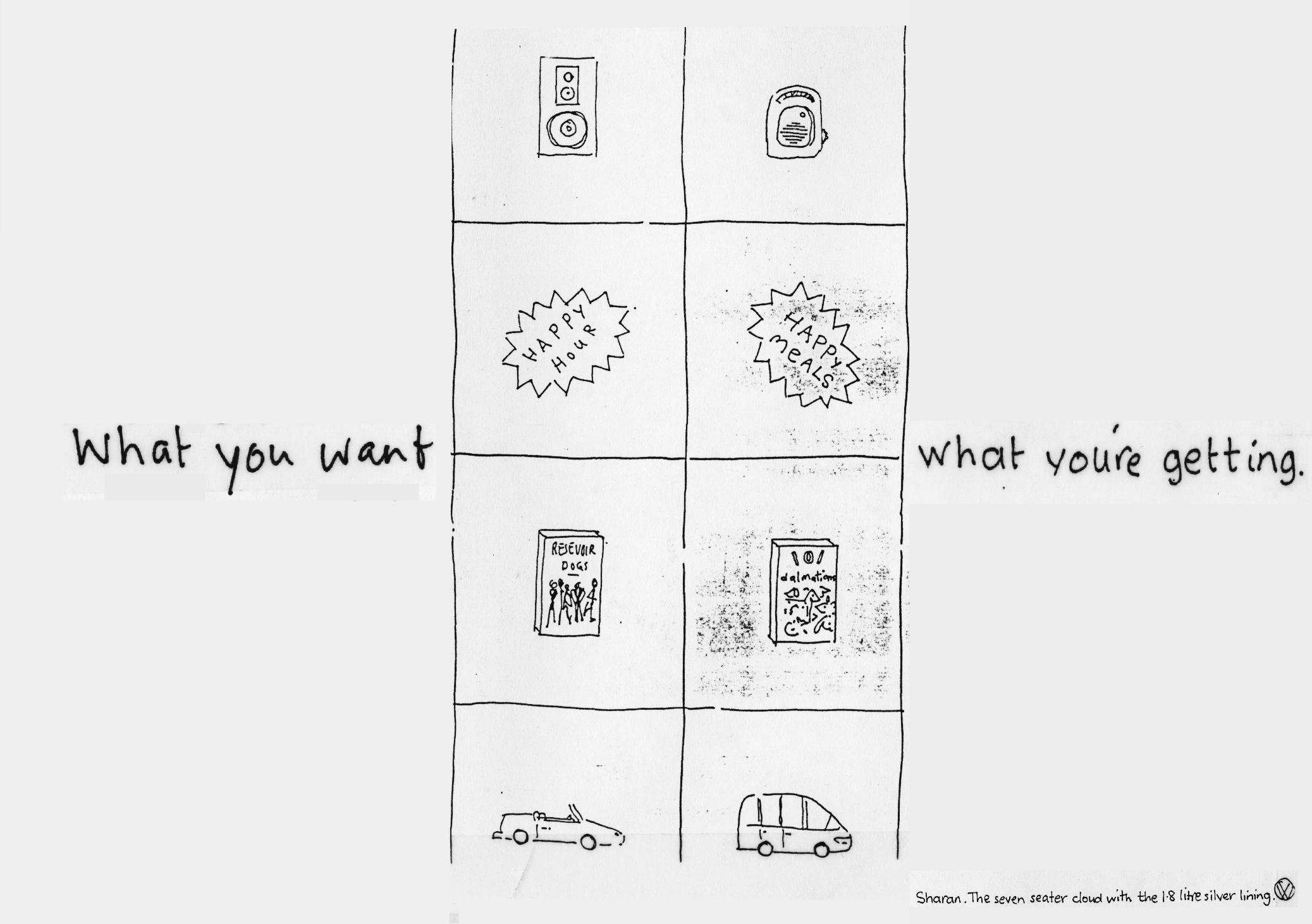 Maybe ‘What you want’ and ‘What you’re getting’ are a bit clunky? Could we simplify it? 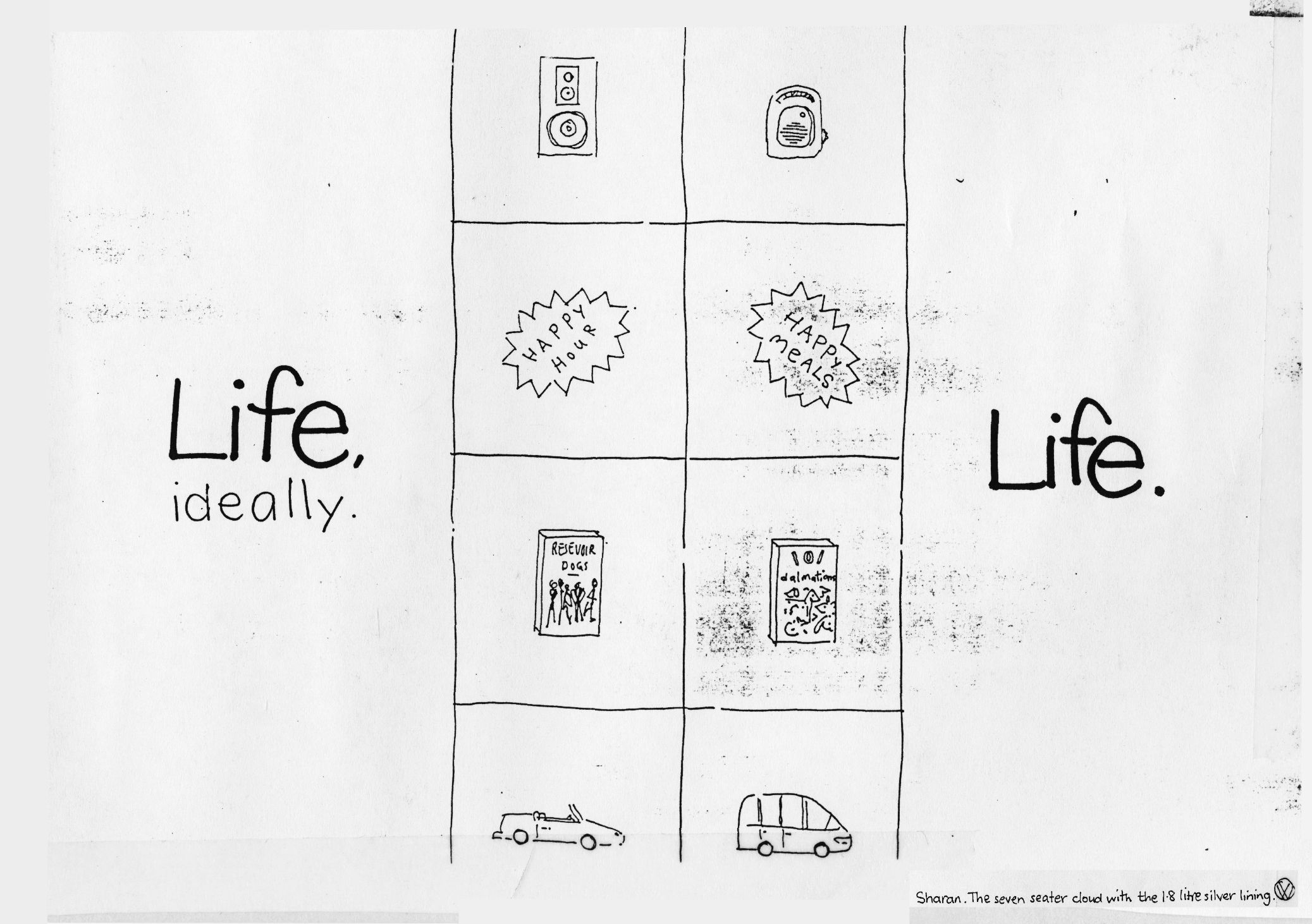 No. It’s simpler, but not as clear, there’s something basic, honest and Volkswageny in the original language.

ART DIRECTION ISSUE 3; There are too many bits, they look too complicated.
Some order was needed, particularly to differentiate what you ‘What you want from ‘What you’re getting’.
Perhaps the rose-tinted view of ‘What you want’ could be rose-tinted, and the harsher, more truthful view of the world could look harsher; black and white. 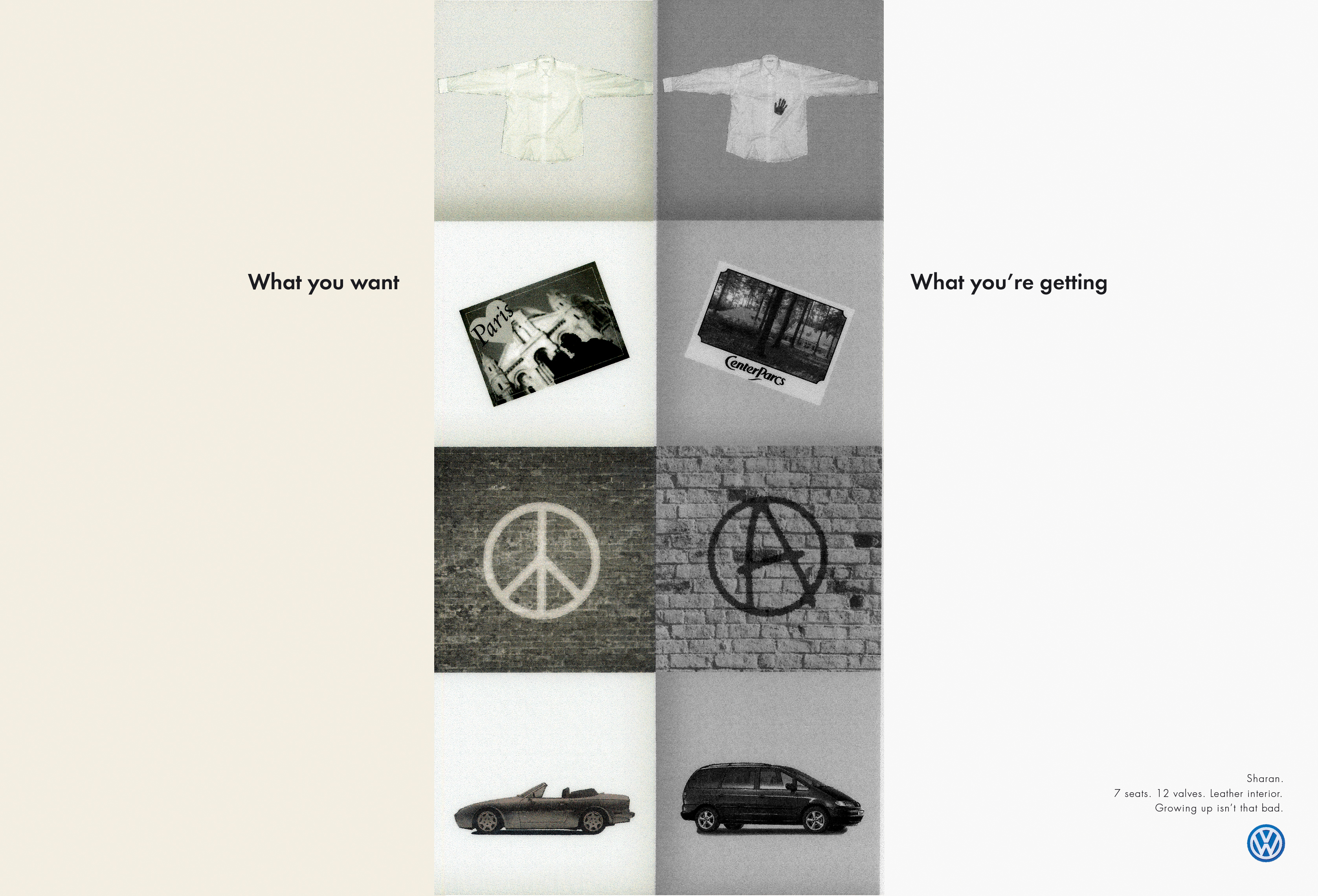 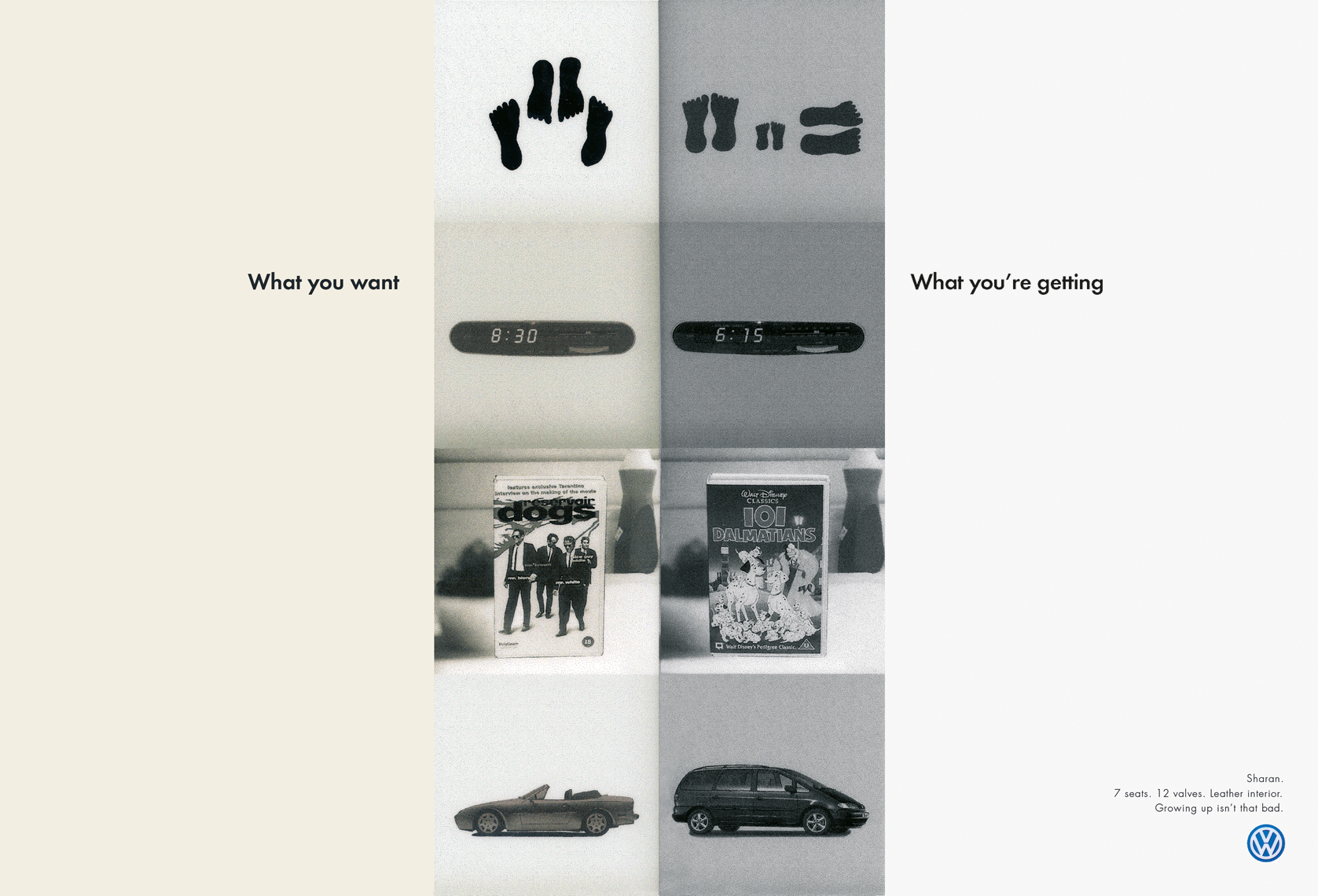 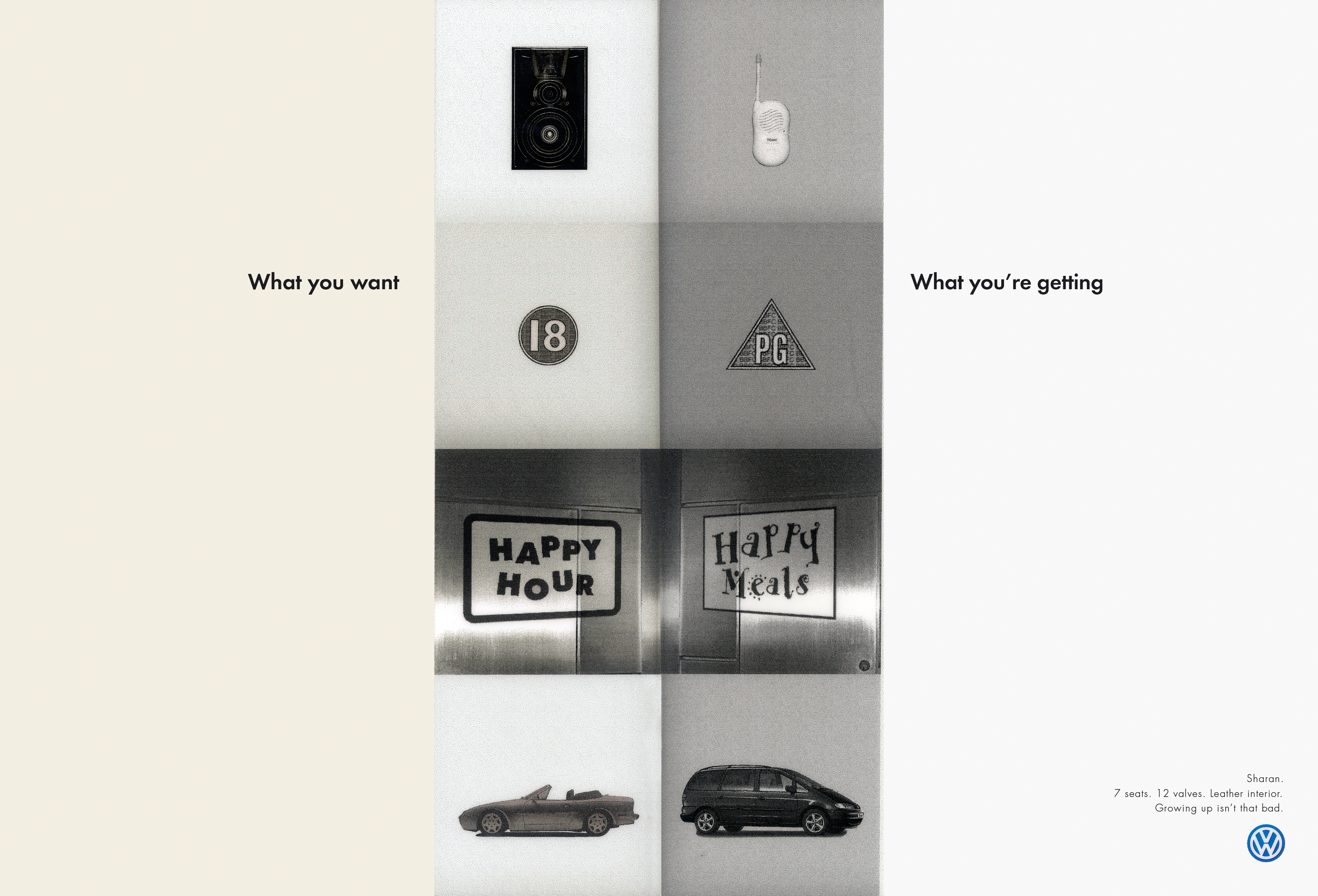 They were shot, made and supplied to magazines.
At the eleventh hour the client got cold feet and pulled them, they worried they were underselling the car.
A replacement campaign celebrated the Sharan’s ‘hidden power’, eg. A shark smoking a pipe.
‘Hidden power’? Strategically that’s complete…what’s that technical term planners use?