‘Would you mind helping a friend of mine?’
I would’ve helped anyway, but the fact that it was Peter Mead asking meant I couldn’t really refuse, he’d delivered business and wise counsel at my previous agency in return for little more than the odd cheese sandwich.
‘Her name’s Polly Tommey, she used to be our receptionist’
A few days later Polly called, she talked about needing a poster a charity she’d set up; Autism Trust.
The following week she came in to talk more this potential poster.
‘Where is this poster going to go?’ I asked, half expecting her to say a few local churches in the Richmond area.
‘On…er…posters…stuck on posters.’
‘Stuck on posters? Oh, proper posters then?’
‘Yeah, those big ones you drive past.’
‘48 sheets?’
‘Yes, that’s it’
‘Oh, has someone donated a 48 sheet?’
‘Yes…a hundred.’
‘A HUNDRED! You’ve been given a hundred 48 sheets, wow.’
‘Is that good then?
‘Yes, it’s not far off what we’d have for The Economist have every quarter’.
‘Oh,’
‘What do do you want to say?’
‘What do I want to say about what?’
‘What do you want the posters to say, what message are you trying to get over?’
‘Well, I have this picture of me and some of the other mums, in evening gowns, looking strong and glamorous, it was shot by Terry O’Neill…’
(Polly is third from the left.) 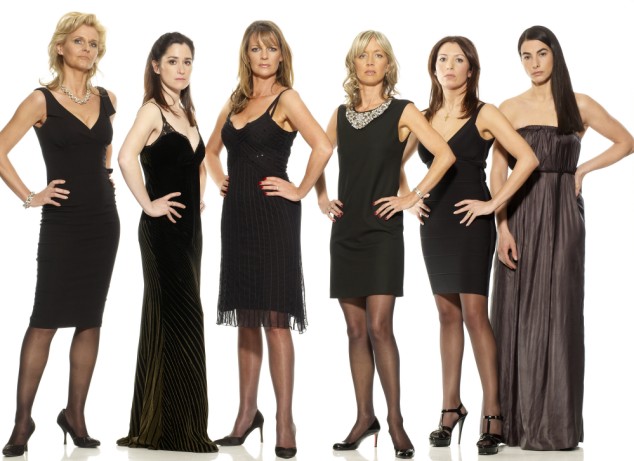 ‘Right…’
‘So I thought it would be good to use?’
‘Ok…and did you have any ideas about what it would
‘We had one, “Hello Boys!”
‘Anything else?’
‘Yes, the Autism Trust logo.’
‘Blimey. I can’t see how that’s going to help you.’
‘What do you mean?’
‘Well, usually you’ll have a goal, a target, it may be to raise money, to change perception, raise awareness of an issue…is there anything like that you want to do?’
‘Not really, we just thought the hello boys idea would be a bit of fun.’
‘Sure, but you’ve been given a very valuable chunk of media, they’ll get seen by a lot of people, it would be a shame not achieve anything.’
I spent the next couple of hours asking questions:
Do people have a good enough understanding of autism?
Do you have enough funding?
How can Autism Trust help autism?
Is Autism Trust helping with the treatment of autism?
On and on I went, nothing registered.
‘Ok, forget about the posters, if I could grant you one wish, it has to be autism related, what would it be?’
She thought for a few minutes, ‘To talk to Gordon Brown’.
‘What about?’
‘I could save him £489m a year.’
‘How?’
‘By treating autism sufferers correctly, the government are doing it all wrong and wasting nearly half a billion a year in the process.’
This was in 2009, a year into the financial crisis, who wouldn’t want to save half a billion quid?
‘Ok, let’s use the posters to get you a meeting with Gordon Brown?’
‘Can we do that?’
‘We can try.’

So, how do we do that?
I guess we are going to say ‘Dear Gordon Brown, we can save you half a billion pounds – The Autism Trust’. 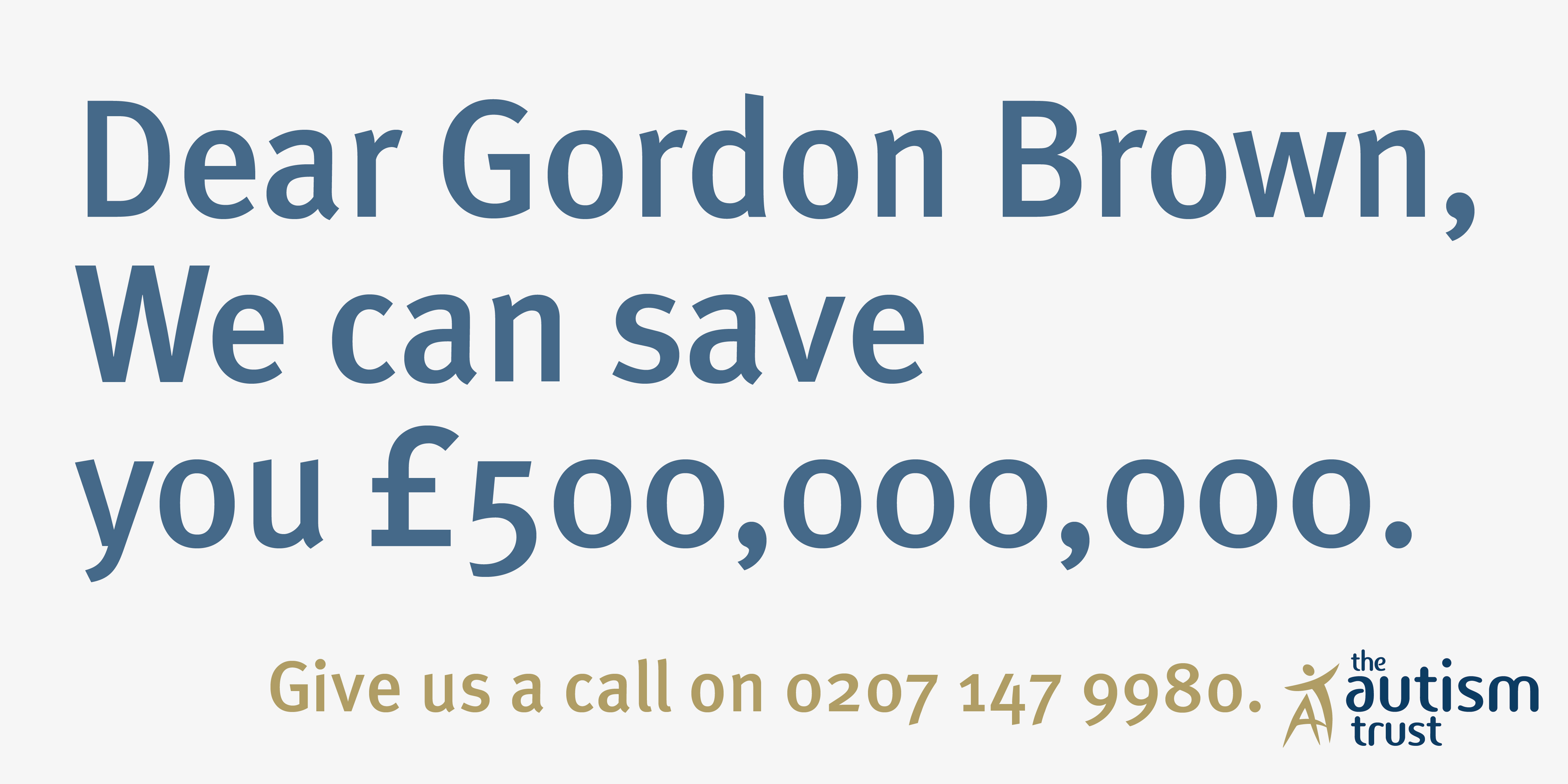 PROBLEMS:
1. Rounding up the figure makes it sound like we are making it up.
Let’s be exact, it’ll sound like it’s been carefully worked out, there-fore believable.
2. It all feels a bit formal and bland, it feels like we’re yet another organisation criticising Gordon Brown, not the lovely lady who came to my office and spoke about her autistic son and how she wanted to help the situation.
Maybe we should ditch the Autism Trust branding and have it be direct from the lovely lady who visited my office? 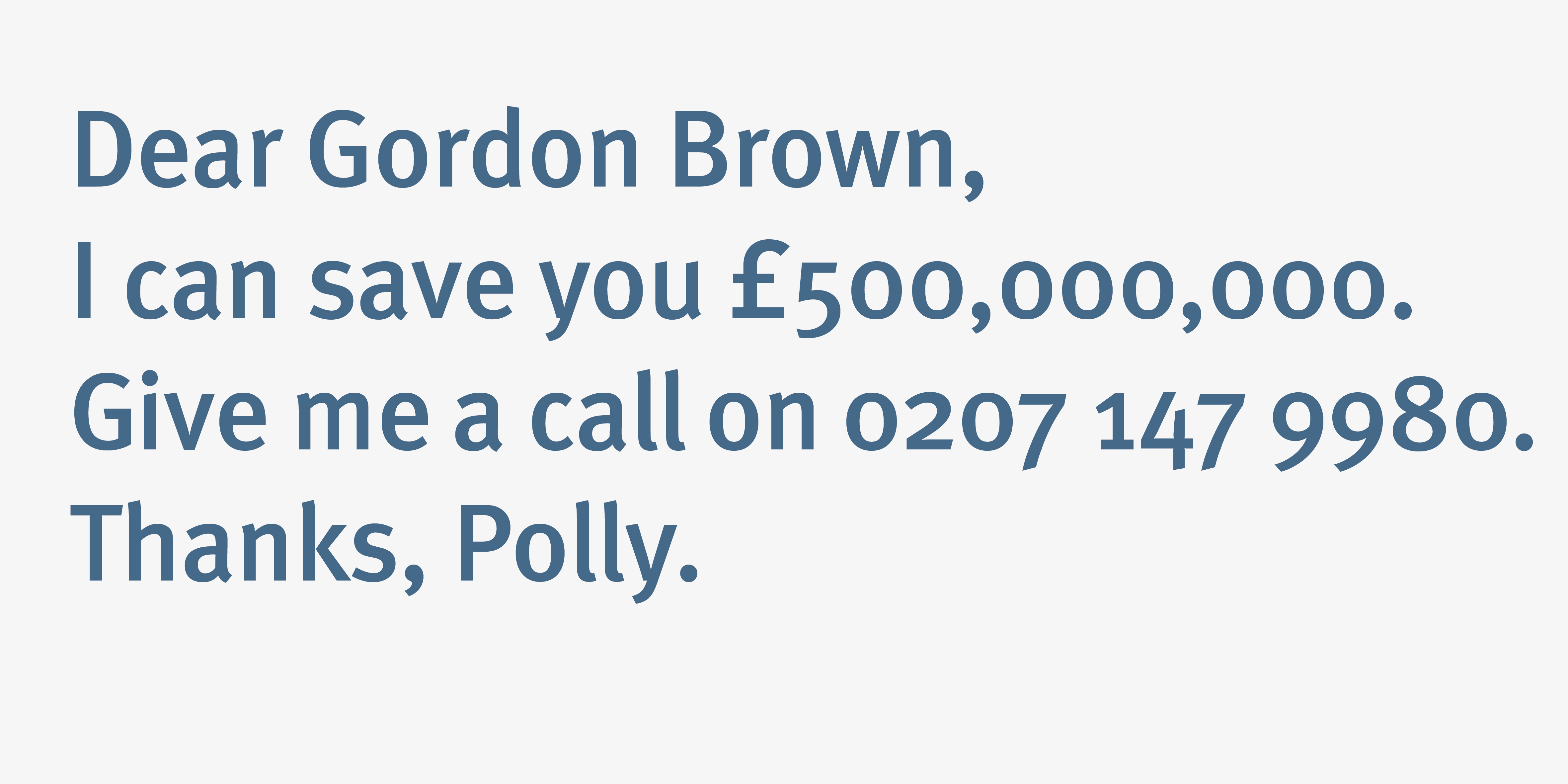 PROBLEM:
1. It feels too worthy.
Maybe we go uber-polite and uber-personal, it’s easy to ignore someone who’s shouting at you aggressively, but harder if they are polite and reasonable.
Maybe we are slightly naive, kind of ‘We know you’re busy Gordon, but…’
2. It looks like a bland ad without a logo, not like a personal note. 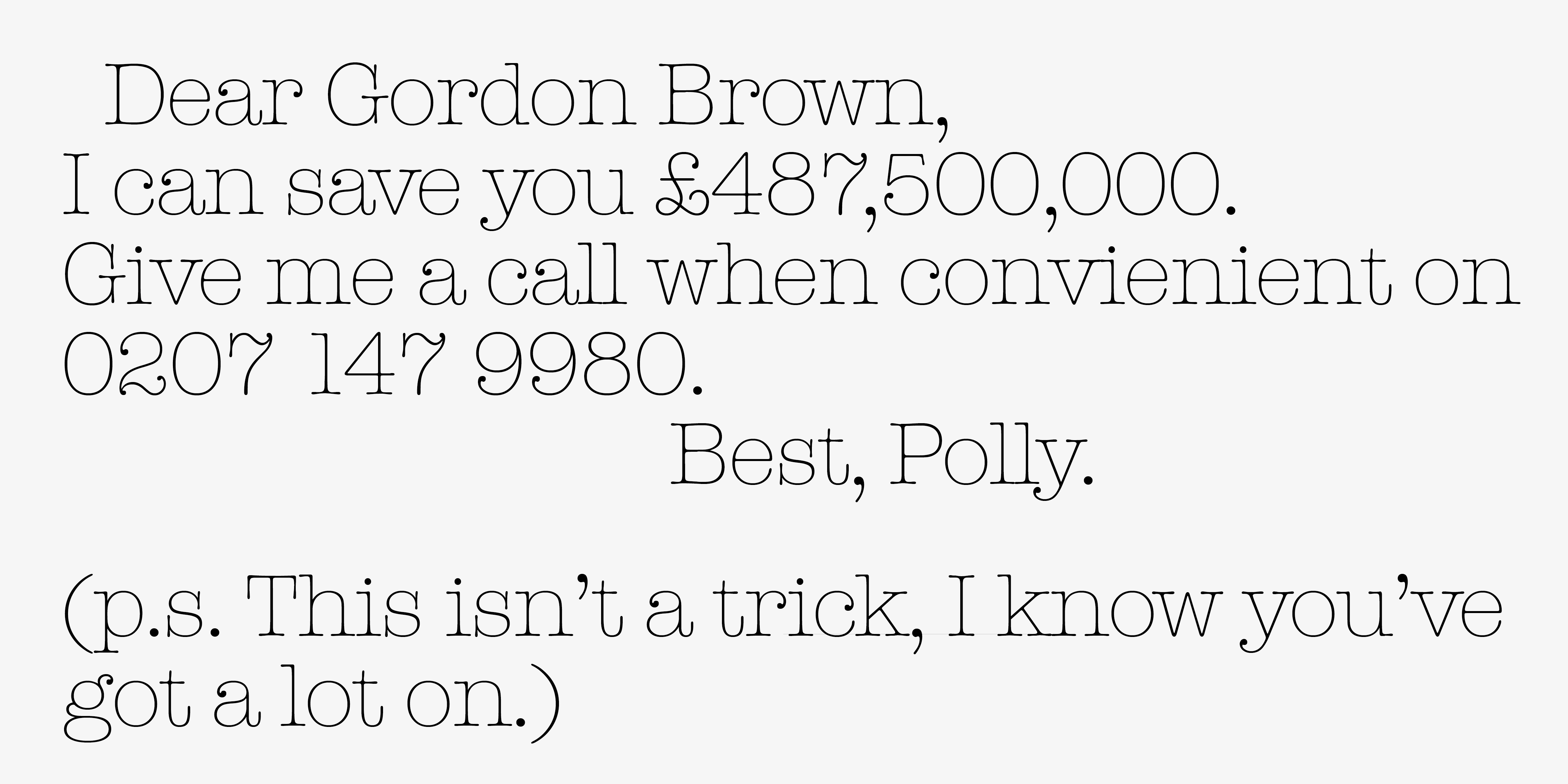 Much better, but the hand-writing, mine, didn’t feel polite of feminine enough.
Maybe we should get a female illustrator to write it, I didn’t want a calligrapher because I didn’t want it to feel professional.
And maybe in should be written in a coloured pen or pencil to feel more upbeat? 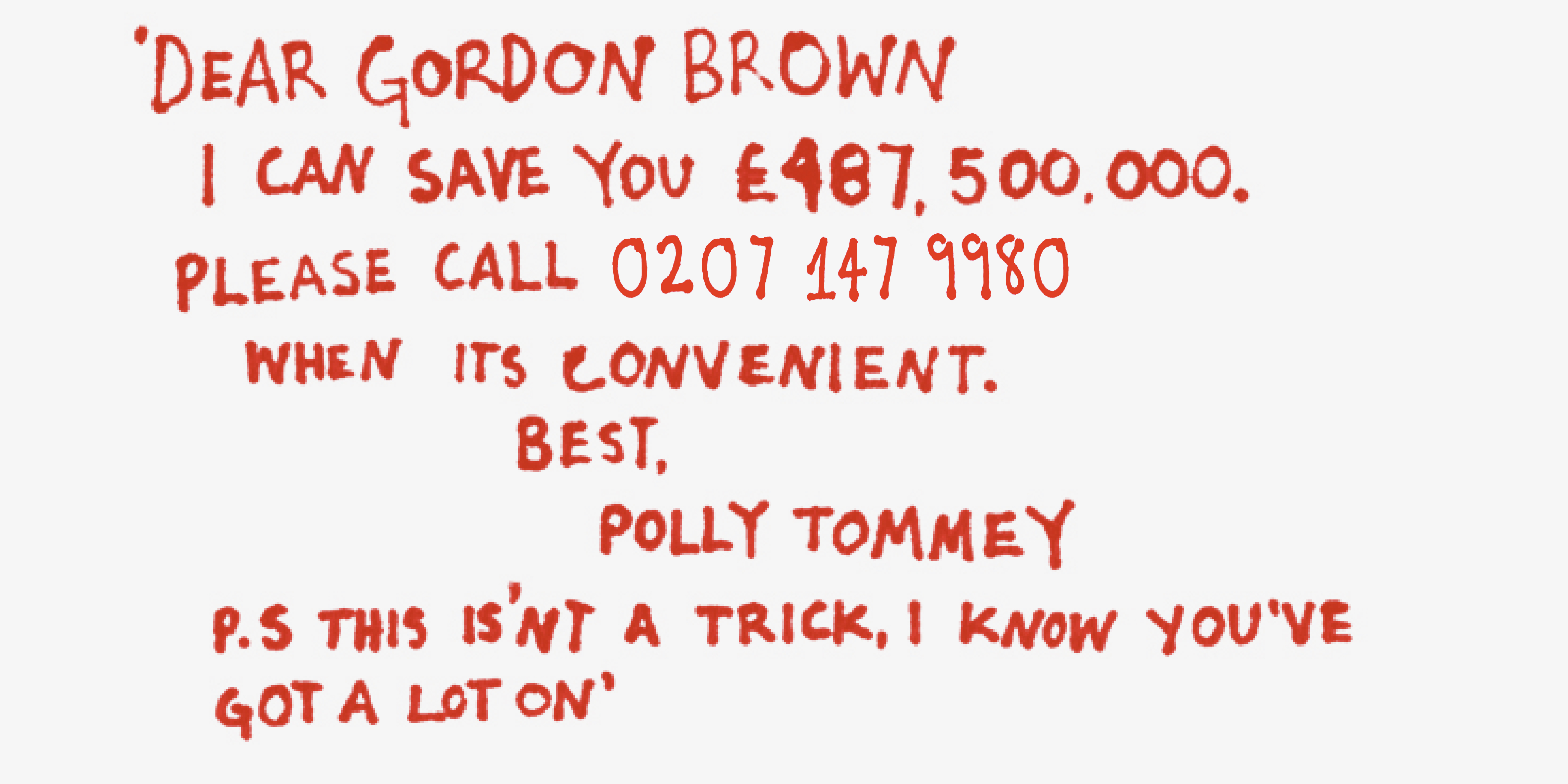 Better than mine, but still not polite or naive enough.
Maybe lowercase? 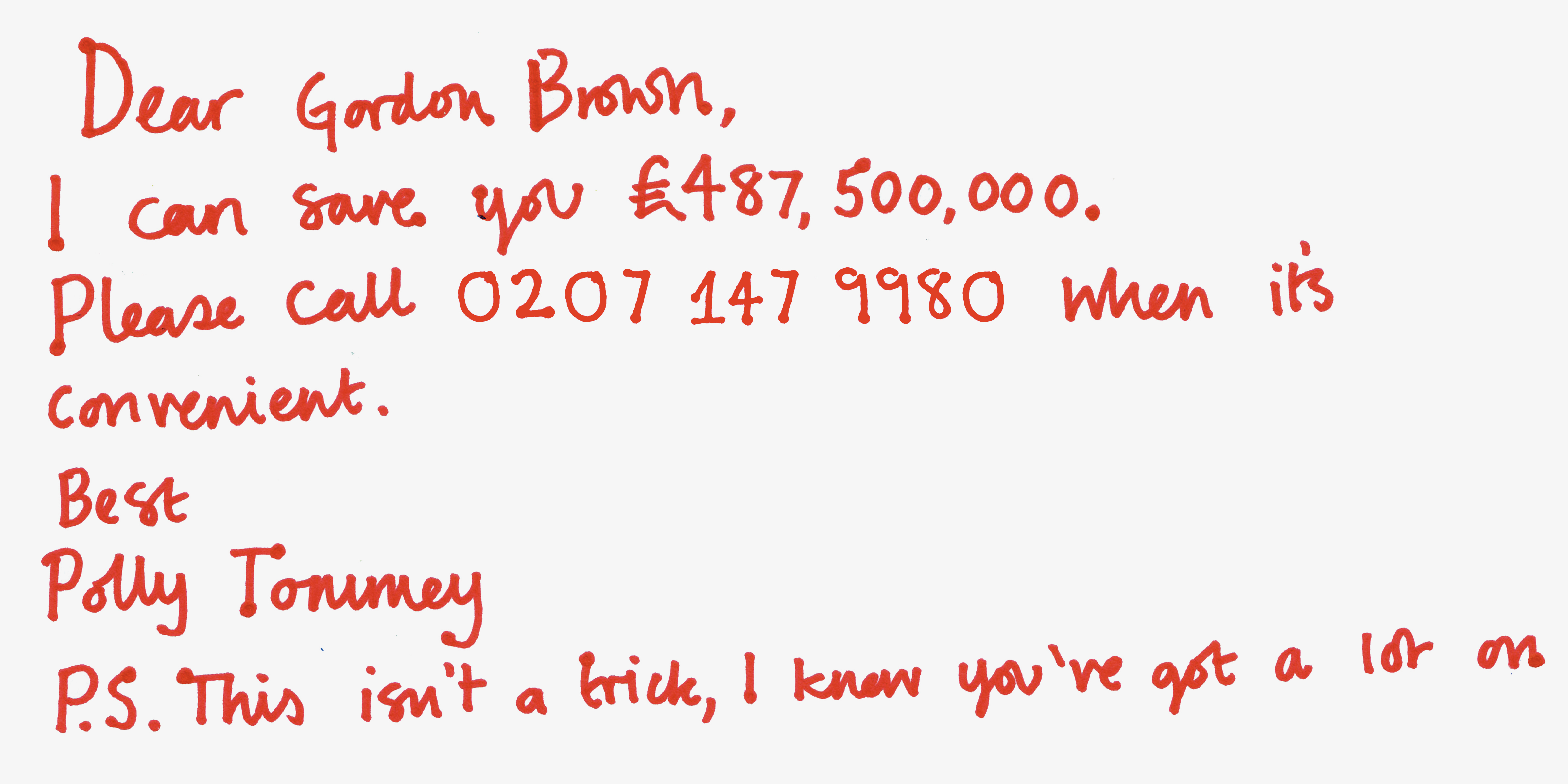 Perfect, it looks like a very polite note from a well-meaning female, which is basically the situation.
You’d have to be very hard-hearted to ignore this plea.
One hundred of these were posted across London. 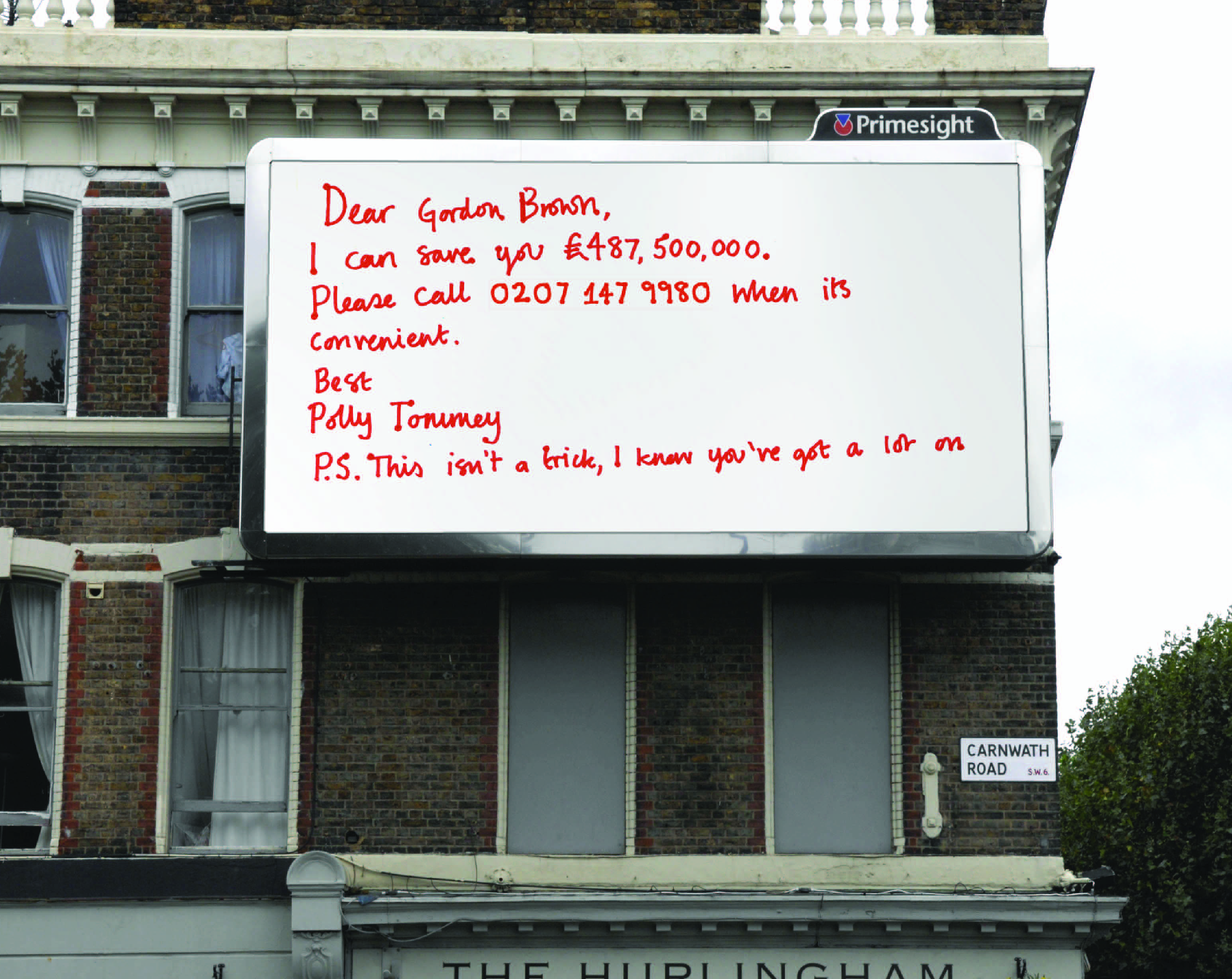 People watched the phone linked to the special phone number we’d arranged, just for one phone call.
We waited, nothing.
We changed the copy on the ad, a reminder, but even more polite. 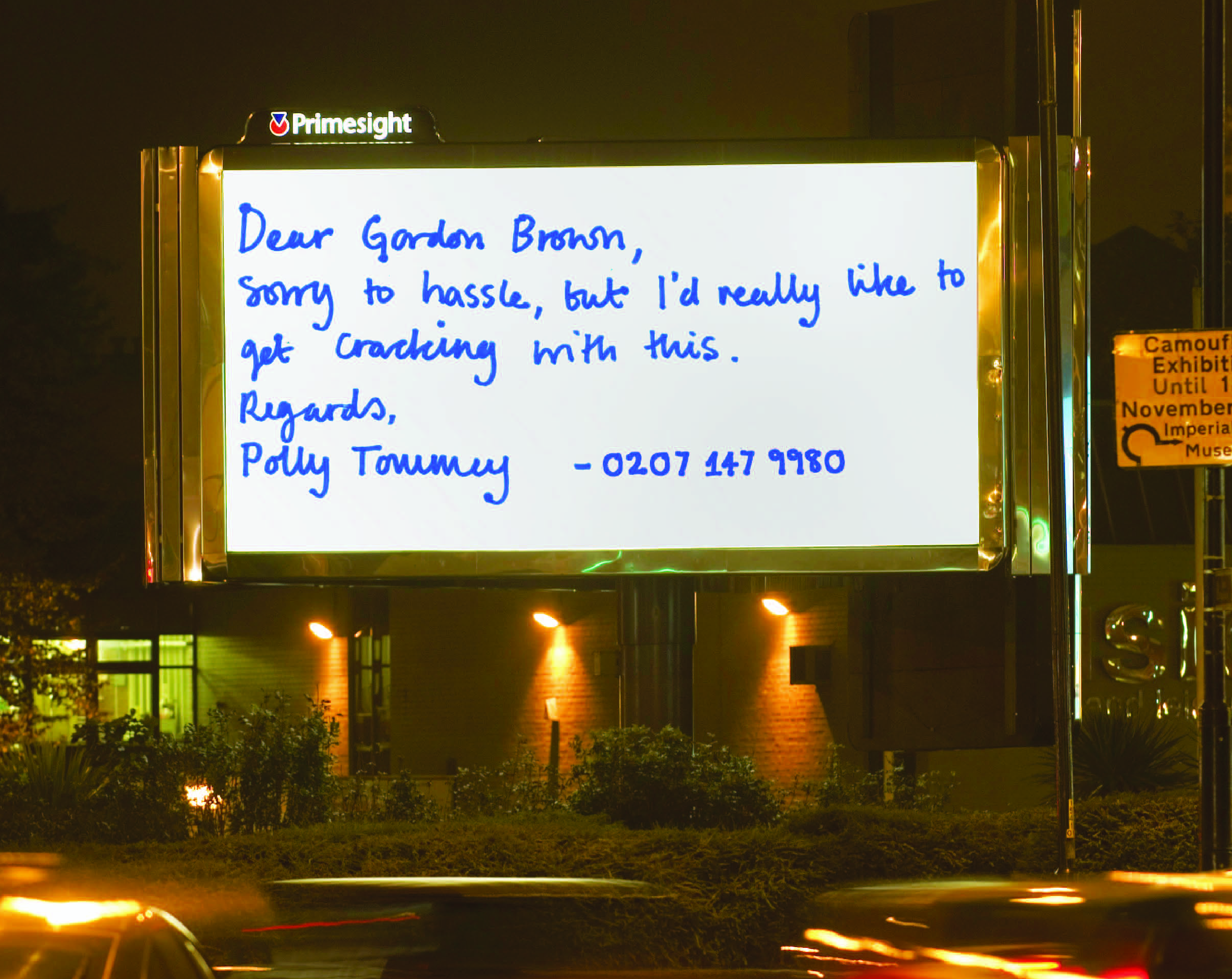 Bingo!
Downing Street called, checked out the legitimacy of the poster, then arranged a time for Polly to talk to Gordon. 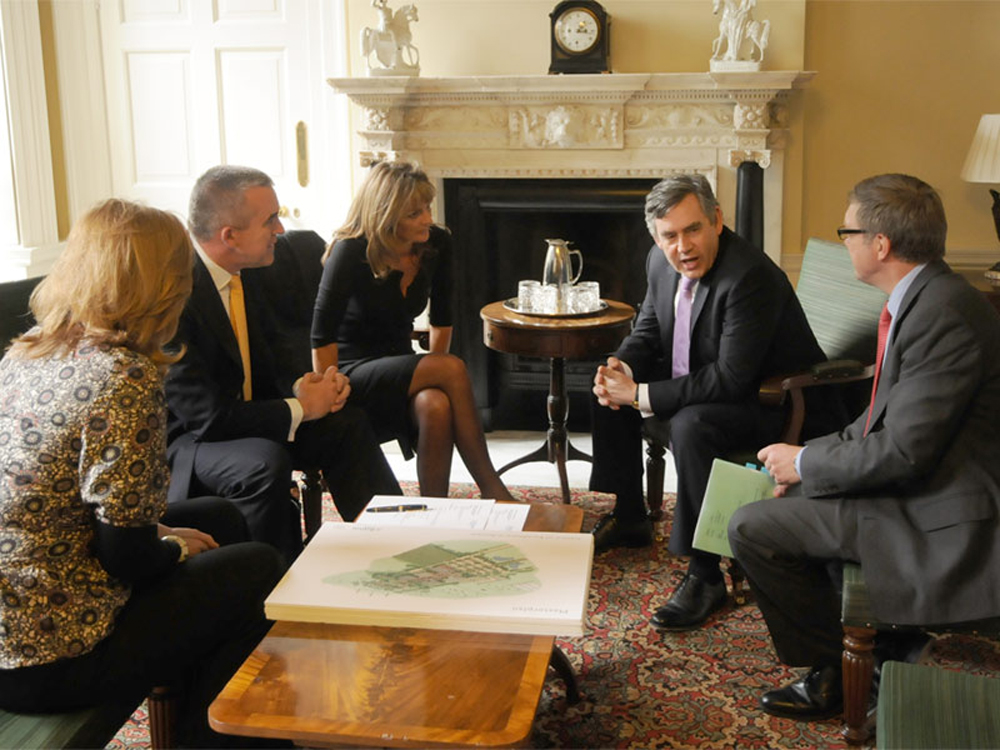 (Polly is third from the left. Again.)
Once she got into No10 the media really picked up on the campaign. 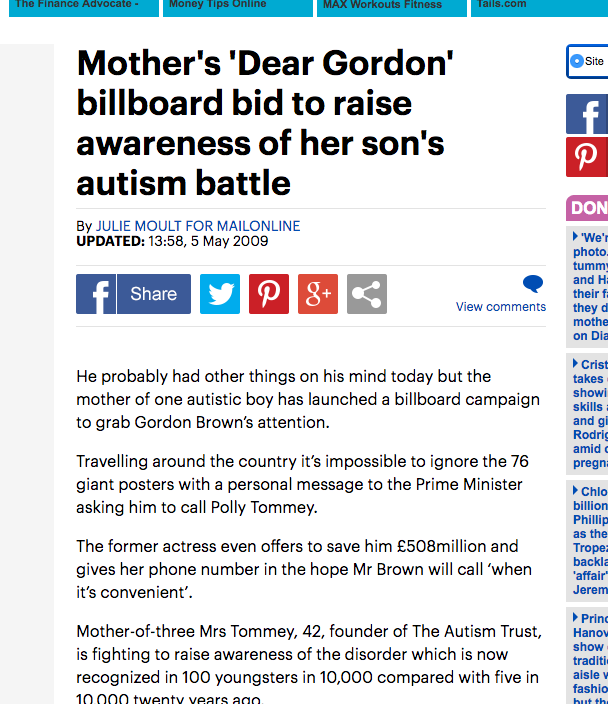 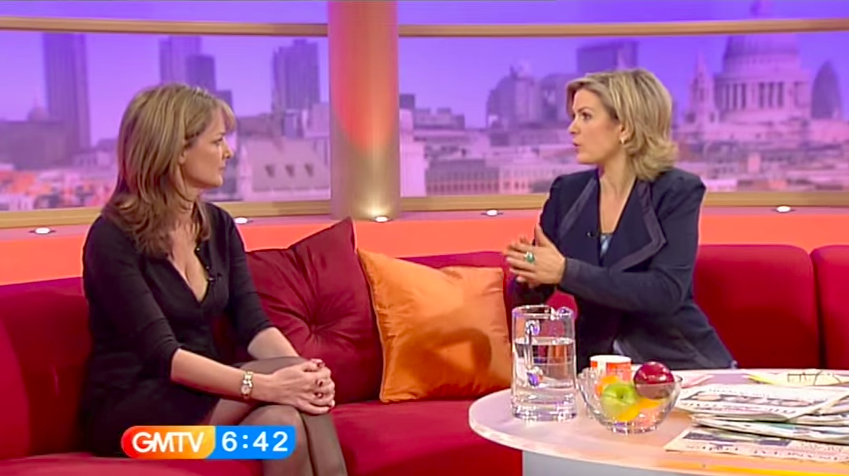 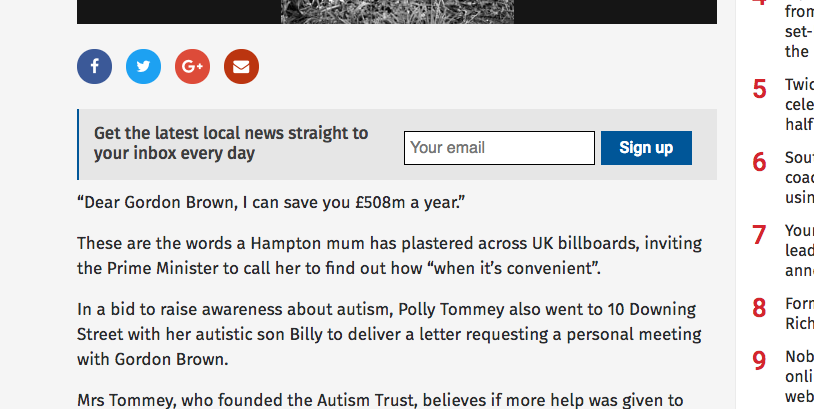 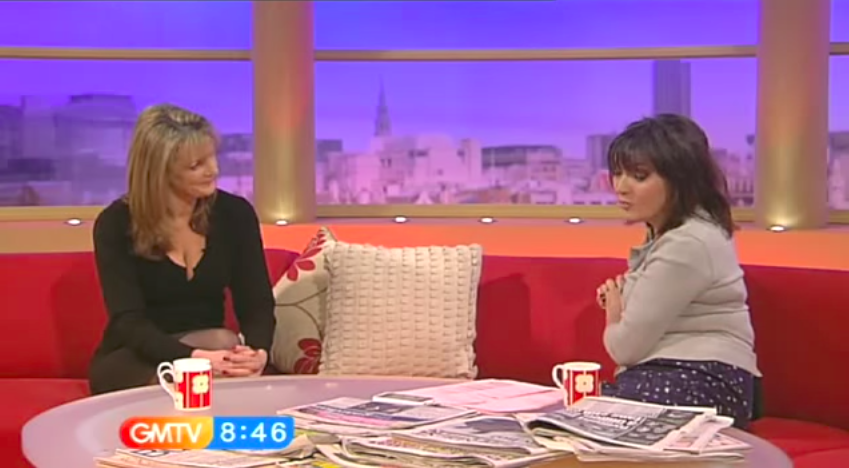 The following year the government changed it’s strategy for helping adults with autism in England, a strategy by that conversation between Polly and Gordon Brown.
(She also did her own ad.) 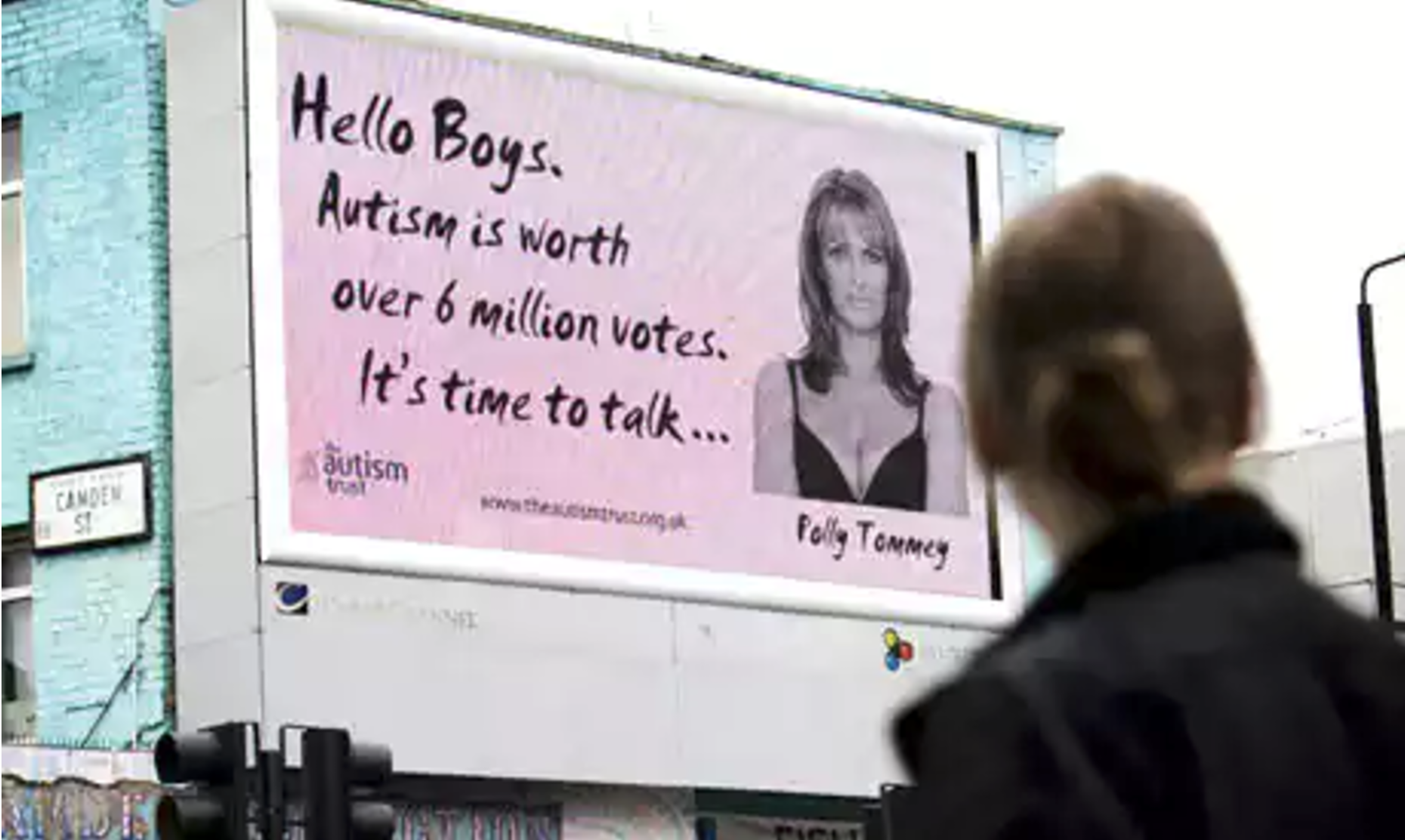 8 responses to AUTISM TRUST: Have a goal.