It’s hard to believe now, but there was a time when rolling news wasn’t a thing.
Whilst at AMV/BBDO, Sean Doyle & I got the brief to explain that not only was rolling news a thing, called BBC News 24, it was a good thing.
It occurred to us that 90% of news was unplanned, random acts, terrorism, floods, accidents, things you just couldn’t predict or plan for.
It seemed like a good angle; news doesn’t stop happening, so BBC News 24 never stops running.
The thought was so obvious, it ran the risk of insulting the intelligence of our audience, so we made the ads a bit sarcastic, tongue in cheek, as if ‘You already know this, but…’.
Like it was reminding rather than informing.
We wrote out some expressions of this idea. 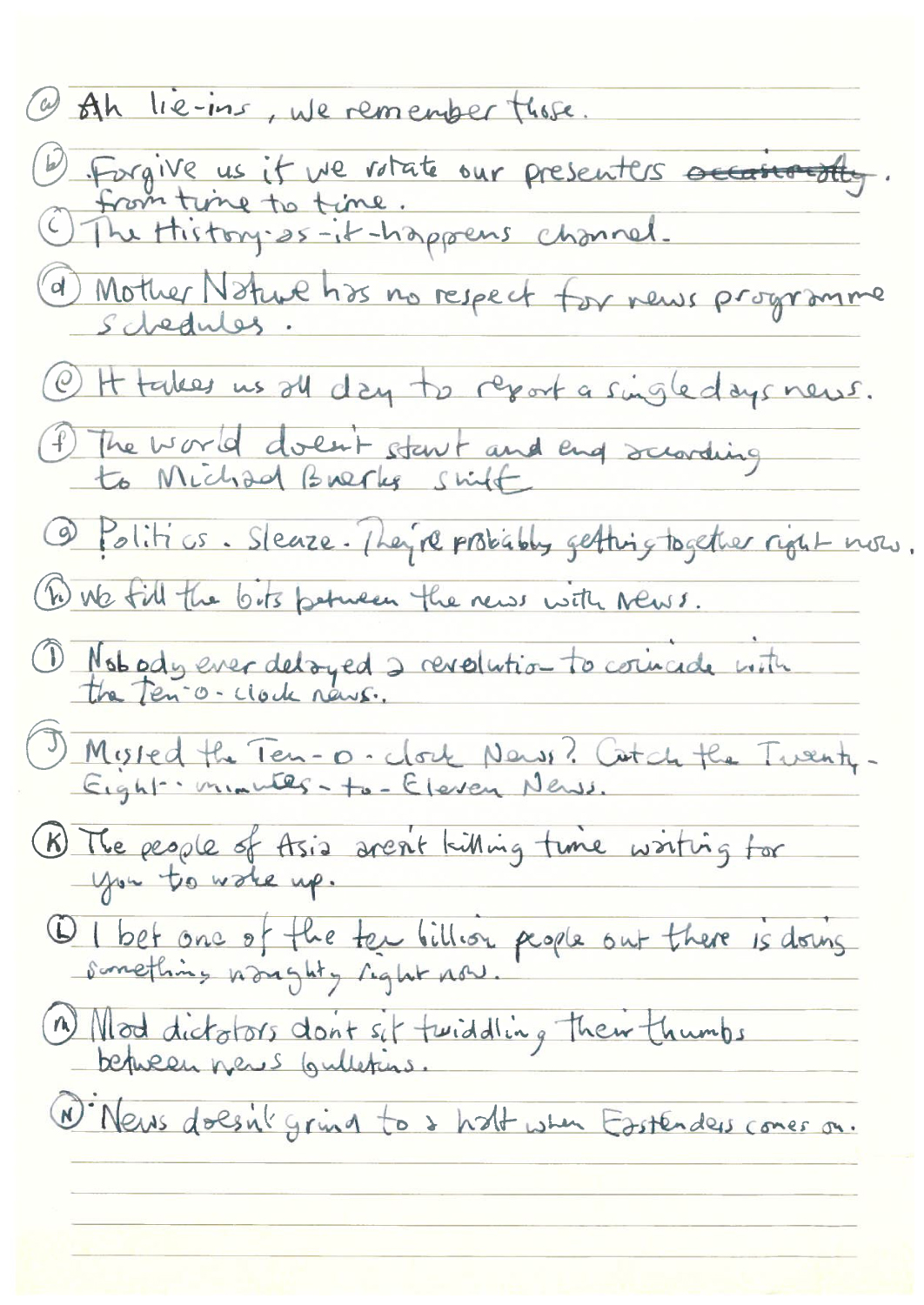 Dave Wakefield came up with a neat idea for the poster layouts; let’s represent rolling news by showing rolling headlines.
Genius, simple idea, that hadn’t been done. (I think?) CLIENT: “Great. But we could look bad if a hijacking, natural disaster or terrorist attack happens when the ads are running?”
What? You mean we could look bad if some actual NEWS happens?
Lighten up, it’s just a bit of fun!
She wasn’t budging.
We reluctantly agreed to make the ideas less specific events.
Out went half the work. (Including our favourite script – We see a plane hijacking, cut to a news anchor ‘And that’s the end of tonights news’, cut back hijacker stop hijacking, he puts down his gun, takes a seat and starts reading a copy of Hello.)
But we still shot these five, Ringan Ledwidge helped us make fun of the idea that the news stopped when the announcer said ‘That’s the end of the news’.

The posters ran like this, there’s the tiniest hint of the rolling news idea, I think the client wanted to see more of the colour they were paying for. Shame.

The campaign hit televisions and streets the second week of September 2001.
Yep, THAT September.
It was all taken off air and billboards immediately.
Fortunately, we didn’t have the embarrassment of having to explain our ‘fun’ hijacking ad.
After that, nobody needed ads to explain the benefits of rolling news.