It’s sometimes tough to argue the obvious.
When you have teams of people analysing, strategising and theorising it’s difficult to sound like the dumbest guy in the room.
Take ABC, someone must have had to pitch the idea ‘How about we say tv is good?’ 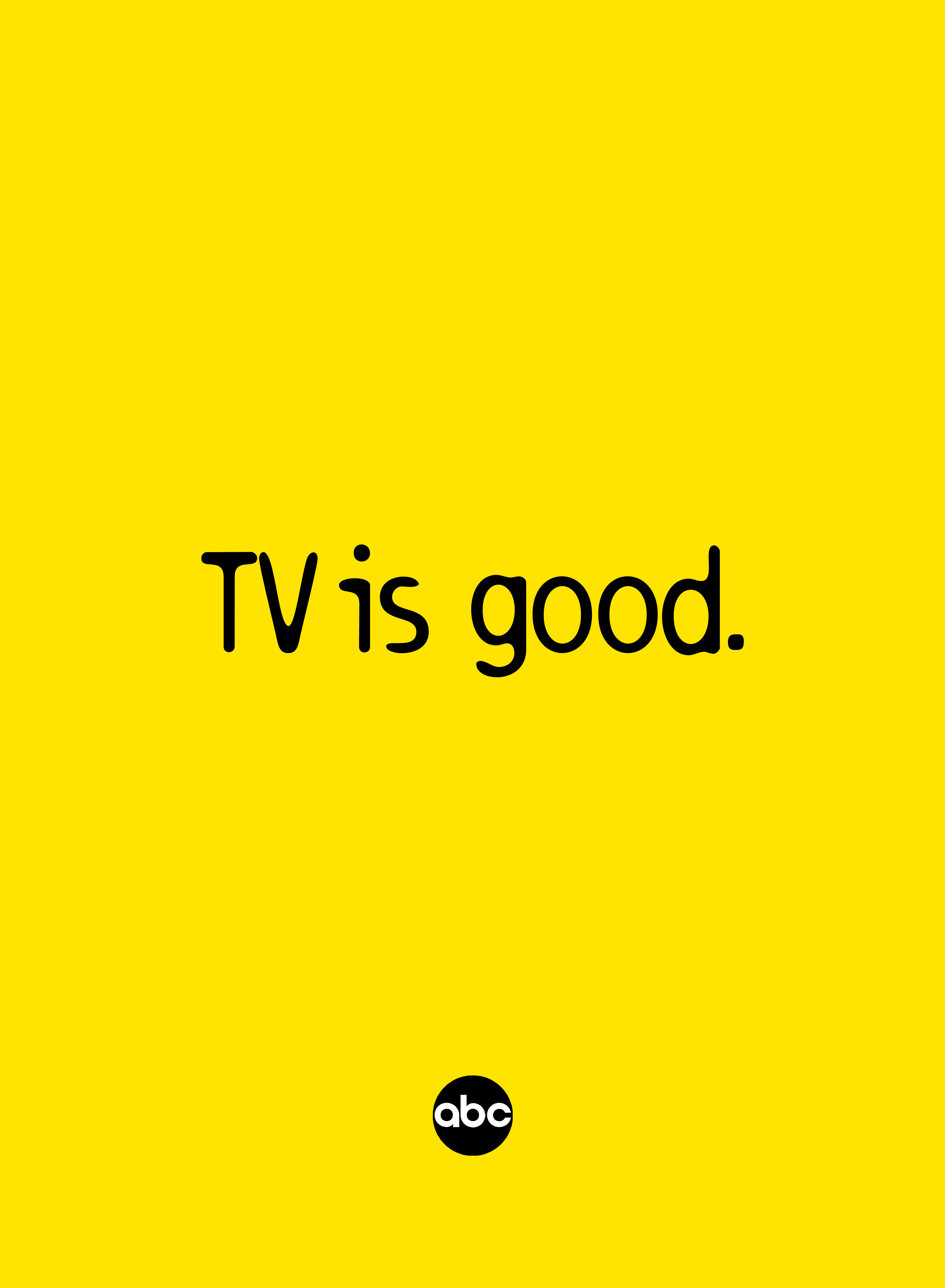 ‘‘TV is good? Duh!’’
It doesn’t sound very creative or intelligent, but it’s right.
It’s not the kind of idea that’s greeted with joy; ‘Shouldn’t we be saying people need tv in their lives? Or say that it’s the most cost-effective way to shift a product? Or maybe we say it enriches lives and gives joy to the joyless? Educates the uneducated, y’know… the white trash… thickheads?’
There are armies of people with long titles and big qualifications looking for something intelligent sounding to build a career boosting power point presentation around. So holding on to your gossamer thin vibe against an army wanting empirical evidence is hard.
‘Haven’t we got a demographic insight? Some media usage numbers? A chart with some big numbers on? Come on, throw us a bone here?’
But sometimes a believable emotion can be more powerful than a dubious fact.
I remember Paul McCartney once being challenged about the unevenness of The Beatles ‘White Album’, ‘Wouldn’t it have been better to put all the best tracks onto a single ’
Instead of defending Bungalow Bill, Savoy Truffle and all the other ‘interesting’ tracks, he said “Nah, leave it alone, it’s The Beatles ‘White Album’ ”.
So uber-confident that you have to agree.

The guys at TBWA/CHIAT/DAY adopted the same attitude with the ABC posters; ‘You want us to defend TV? Er… well, there hasn’t been any World Wars since tv got going, how about that? Now fuck off…idiot!’
Rather than defending tv, it makes you think it doesn’t need defending.
Lee Clow, TBWA\Chiat\Day’s Chairman: ‘We thought, why not kind of honestly celebrate the notion that TV is a good part of our lives, and sitting down in front of it for a while isn’t a bad thing.’ 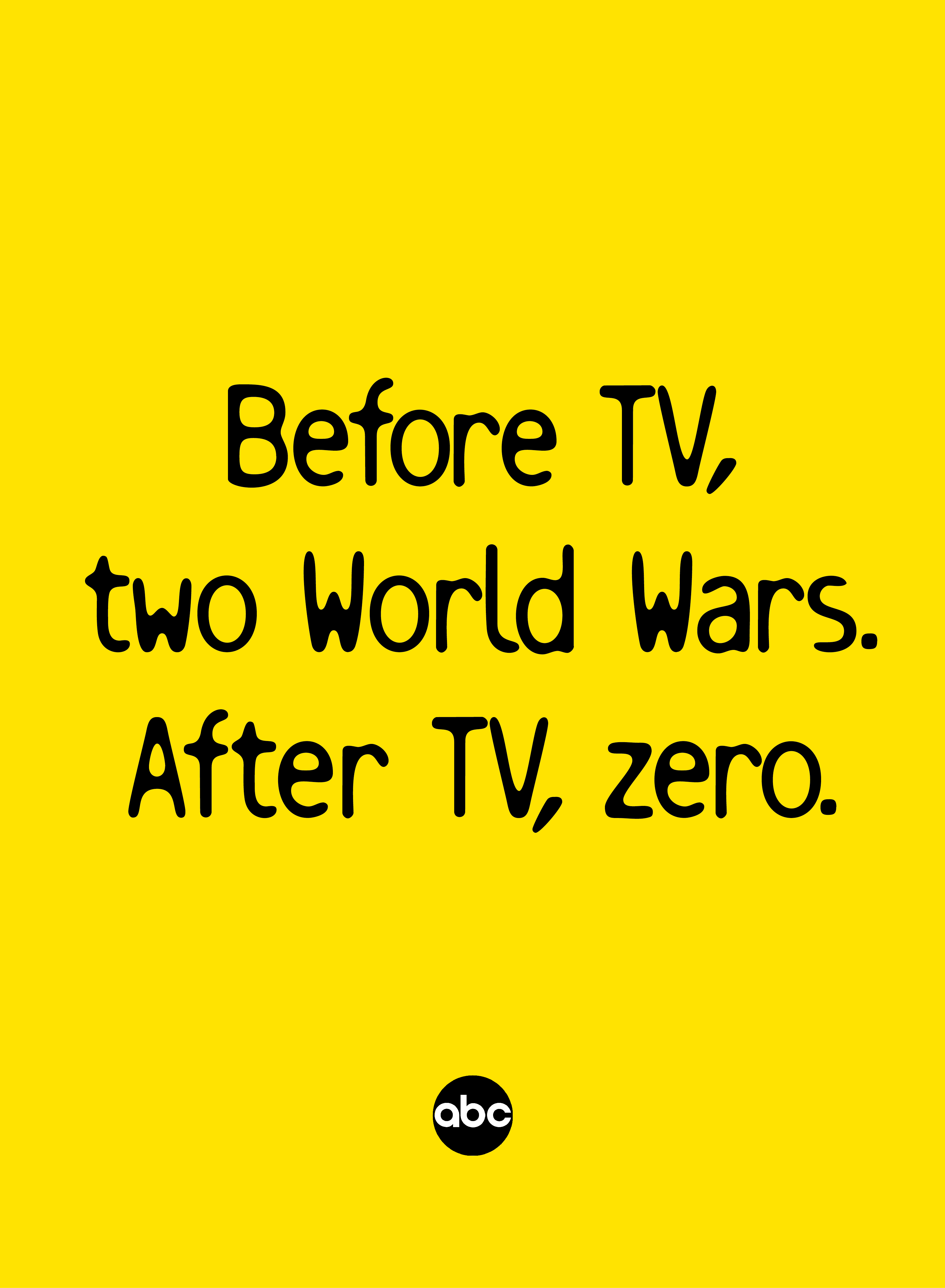 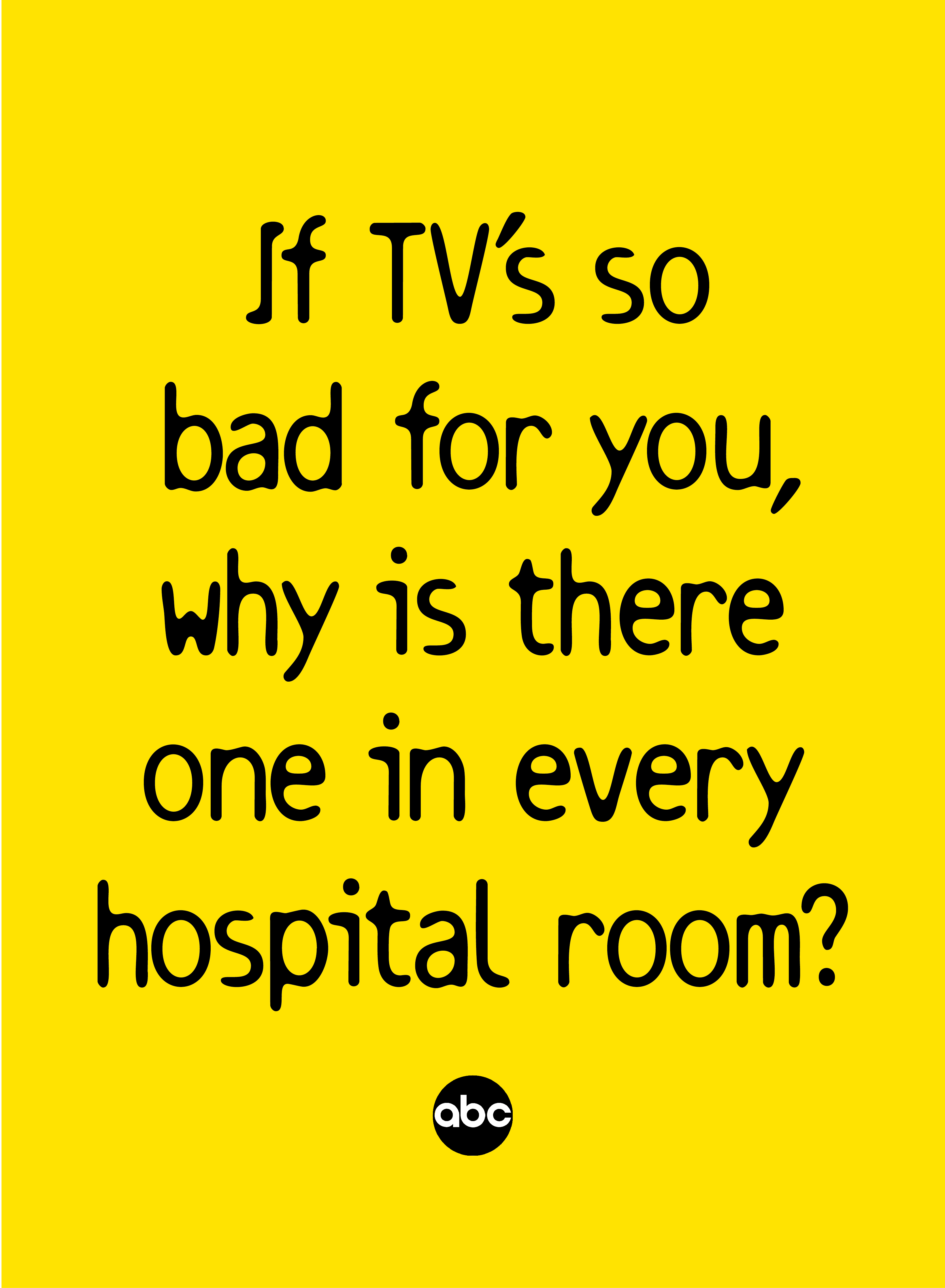 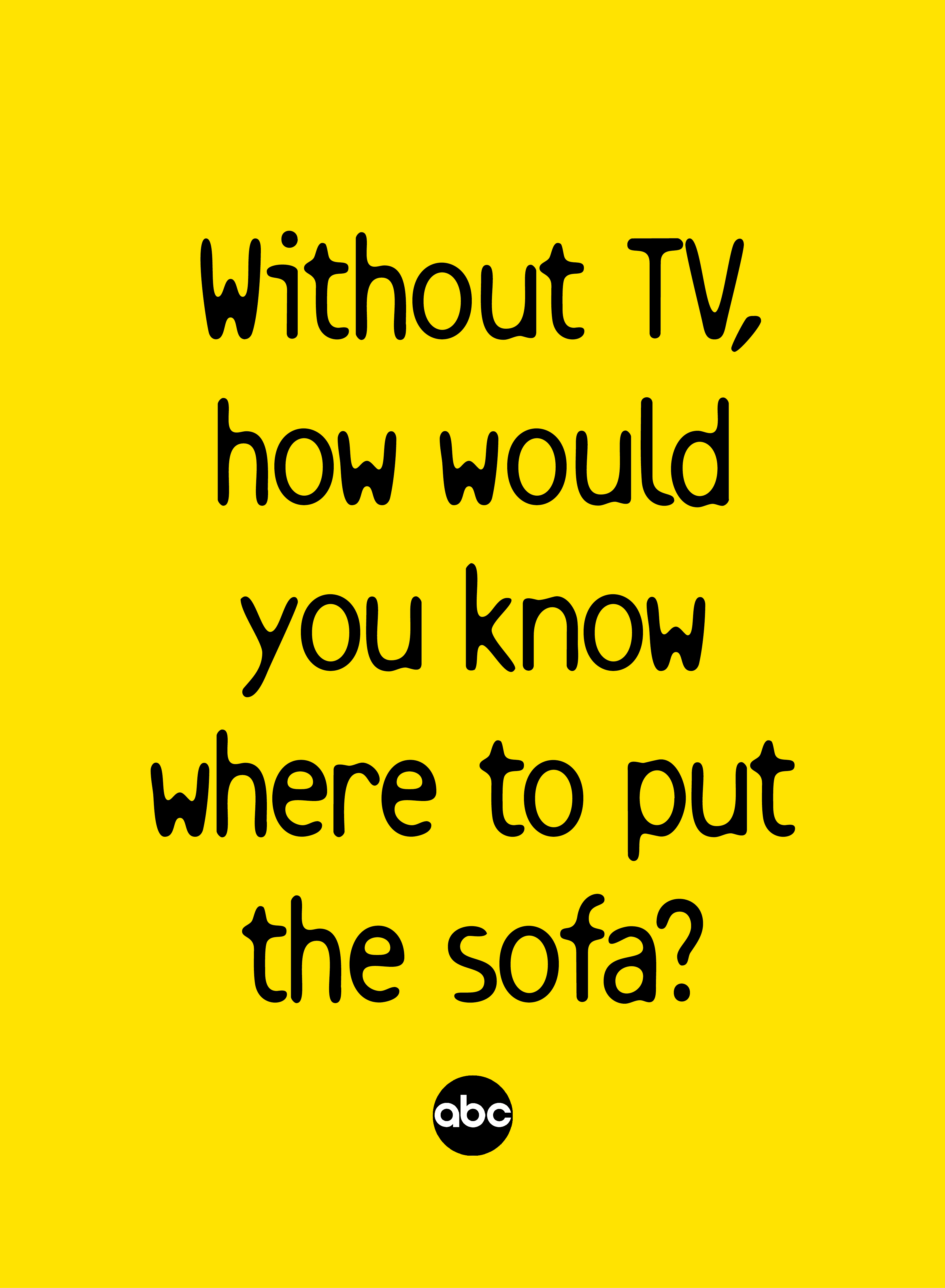 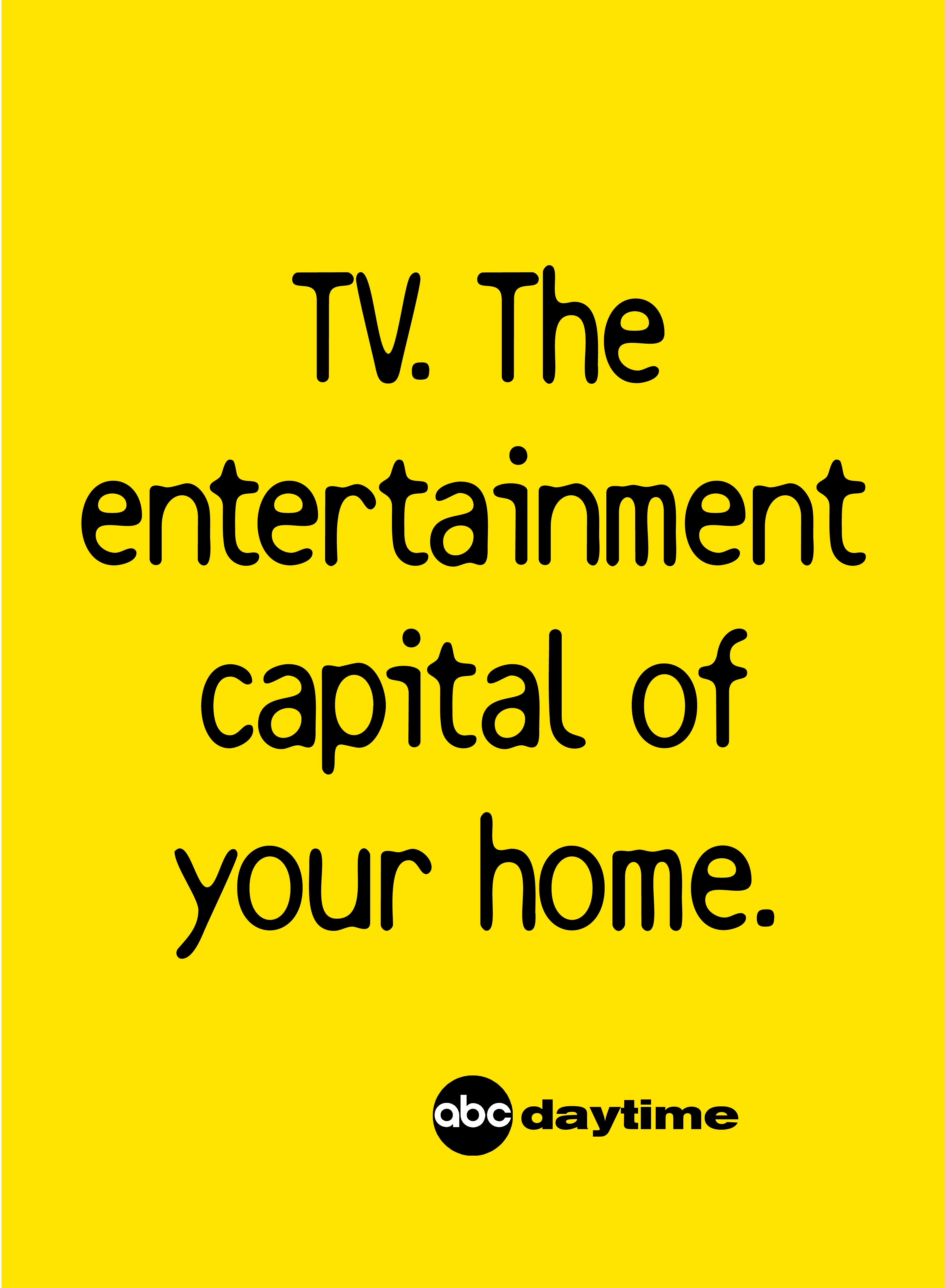 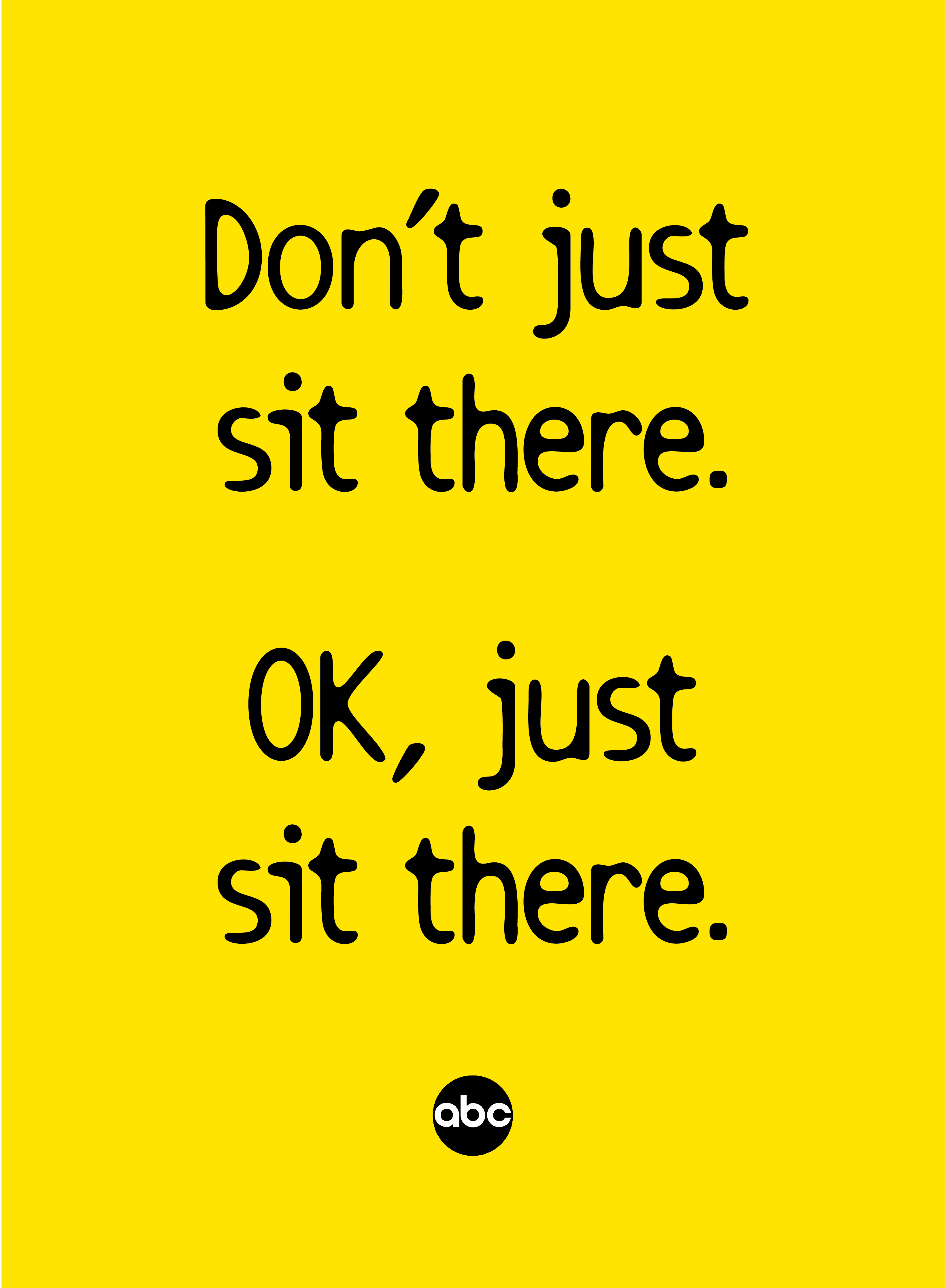 The ads above look good here, on your computer, but the place radically simple, human and funny ads like these work really well is out on the street.
What felt a little too basic on a piece of paper in a meeting will shout above the rooftops when on a billboard.
What felt like a childish joke as a scribble in an office can often kill all the pompous, patronising bullshit that surrounds when on a street. 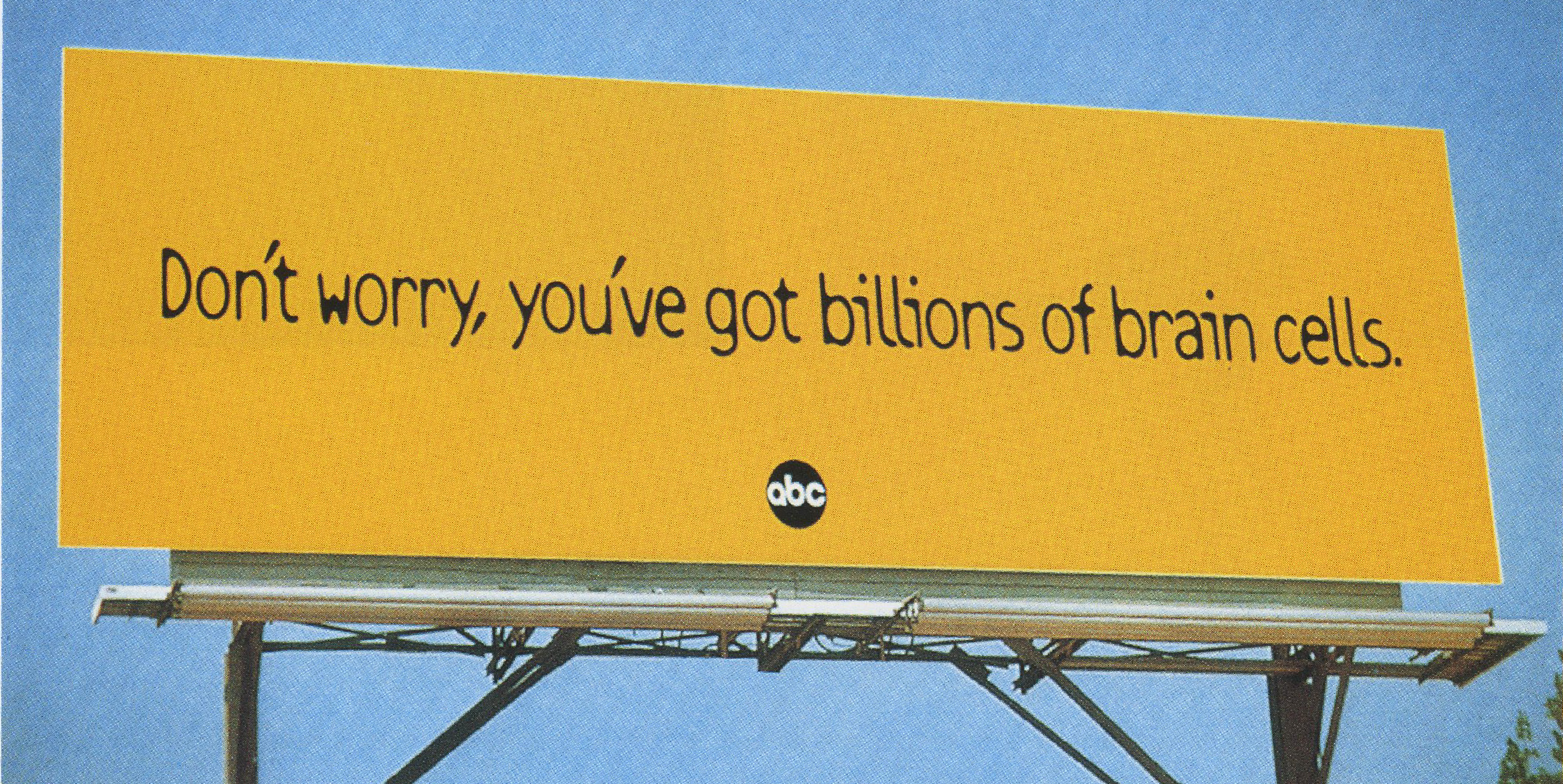 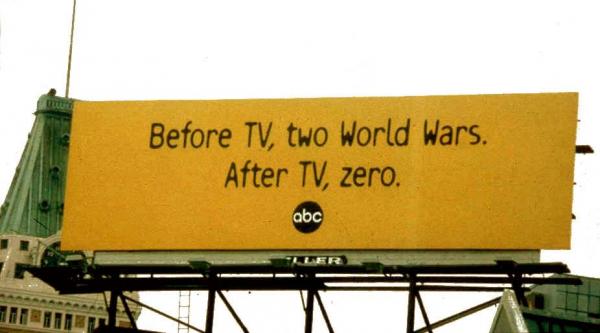 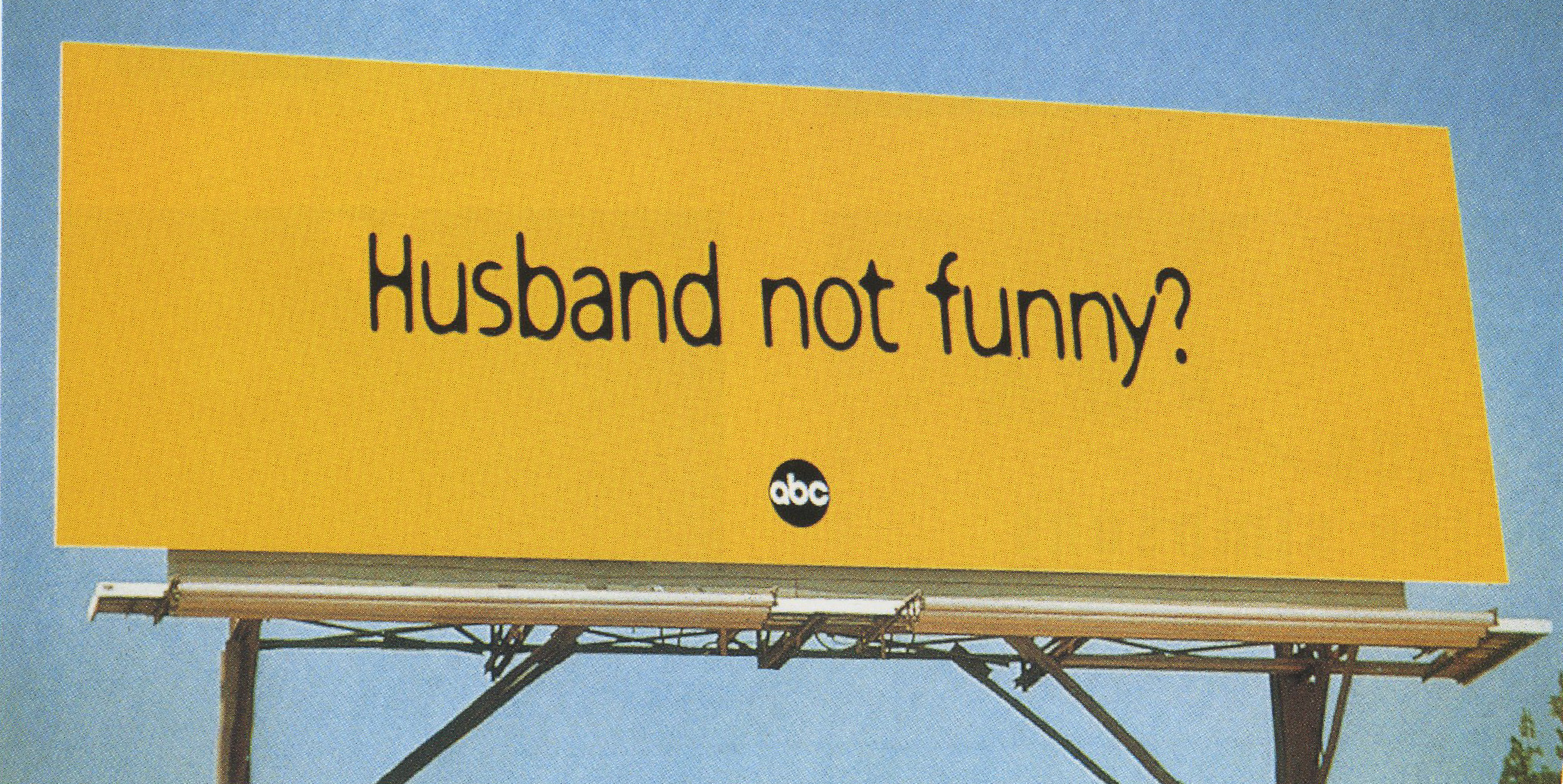 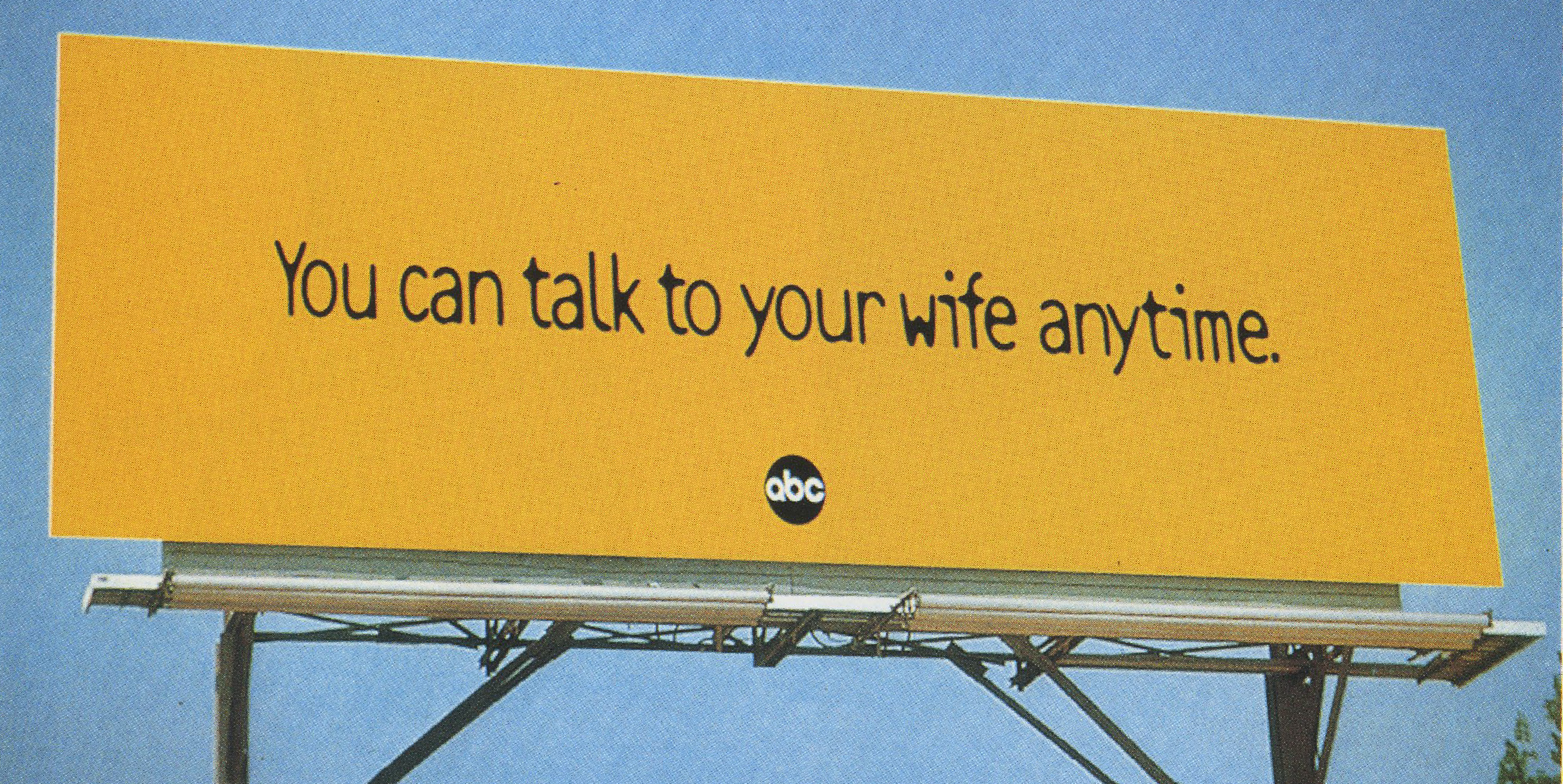 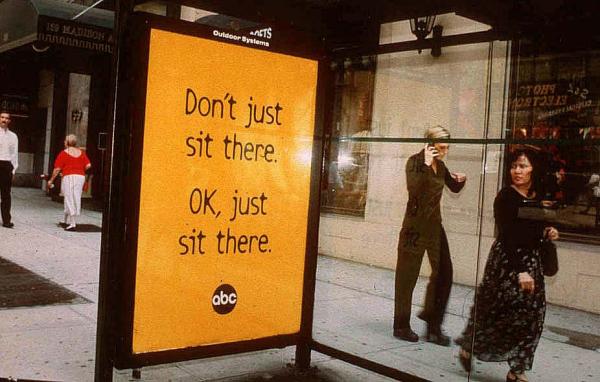 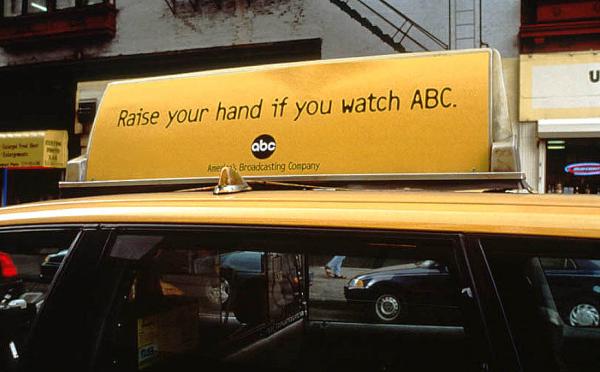 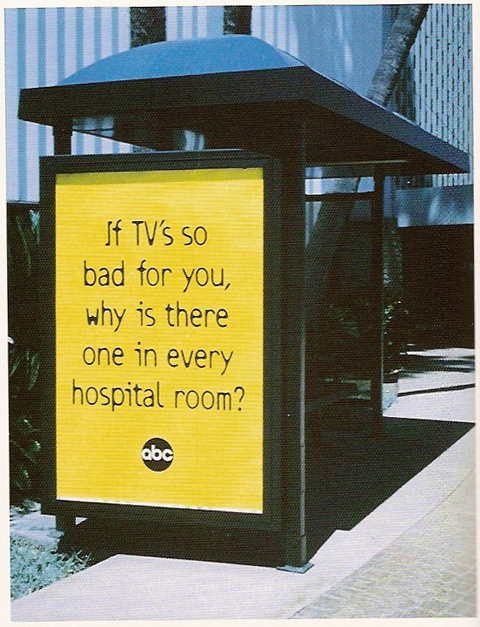 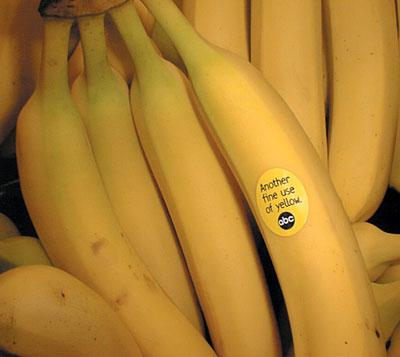 5 responses to Easy as abc?