Discounting premium products can be risky.
It can take decades to build up a premium positioning for a brand, to give their products a value beyond the materials and man hours that have gone into their making.
Once you start discounting you risk making it feel less special, because people know that, generally, products get discounted because they aren’t selling, if they aren’t selling it must be because nobody wants them.

MERCEDES-BENZ PROBLEM:
A stock-pile of C-Class Sports Coupe’s.
They decided to slash prices to make them affordable to a wider group of wallets.

TONAL PROBLEM:
How do we let people know that this very special, exclusive product has had it’s price slashed without making the C-Class Sports Coupe appear like the unwanted runt of the Mercedes-Benz litter?

SOLUTION:
Instead of saying ‘Want one of our cars at a discount?’, let’s take the position that people already want one, it’s a Mercedes-Benz Sports Coupe for heaven’s-sake, our message should be more ‘We know you’ve always wanted one, now it’s a no-brainer’
They sound similar, but they are the difference between a brand being desperate and confident.

IDEA:
That car for that price? There’s nothing we need to add. 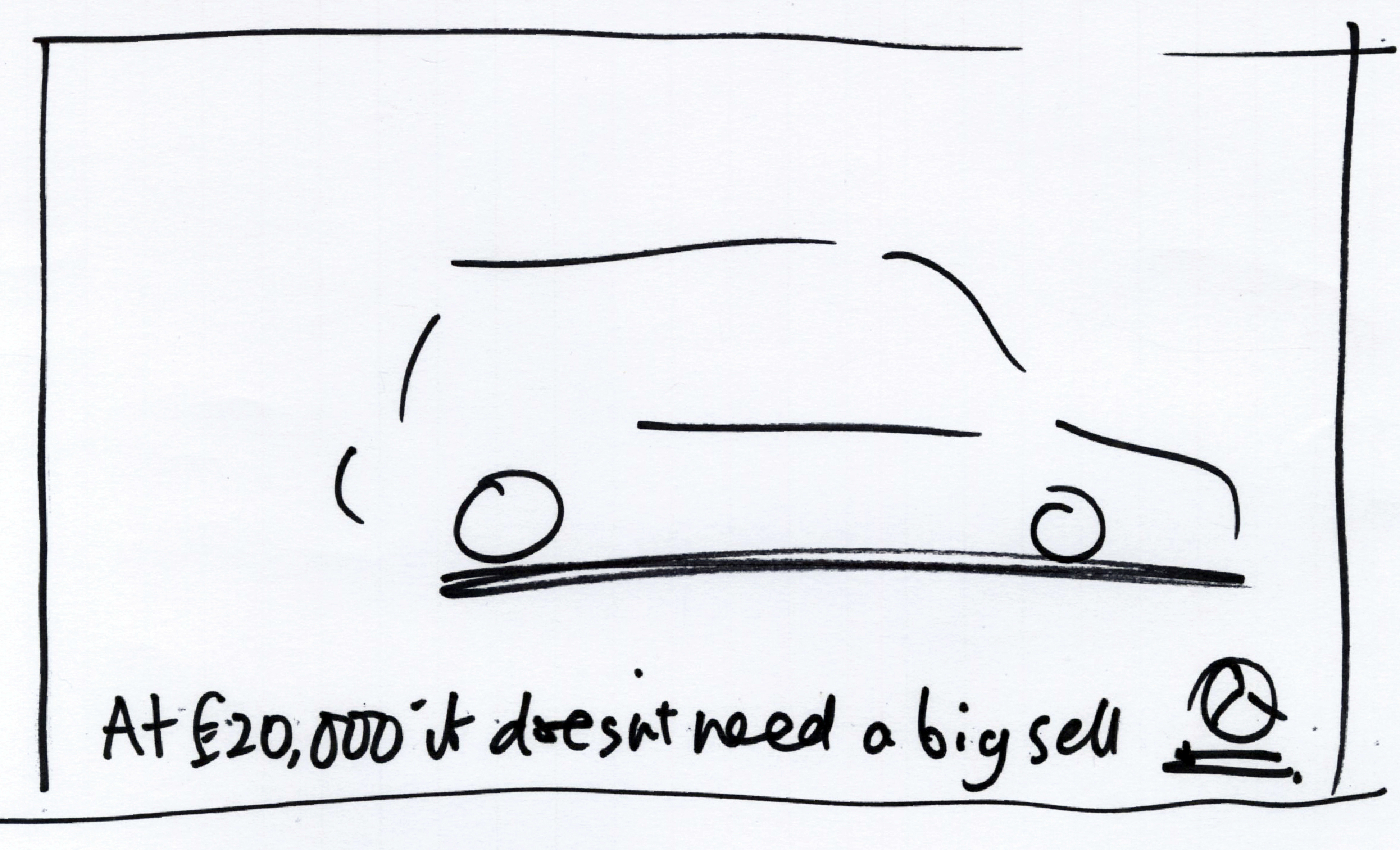 Saying it in such a straight way makes it seem very worthy and uncool.
Also, if it doesn’t need a big sell why have you booked such big bloody posters?
Maybe the headline is just the price, like we are saying what more do you need to know? 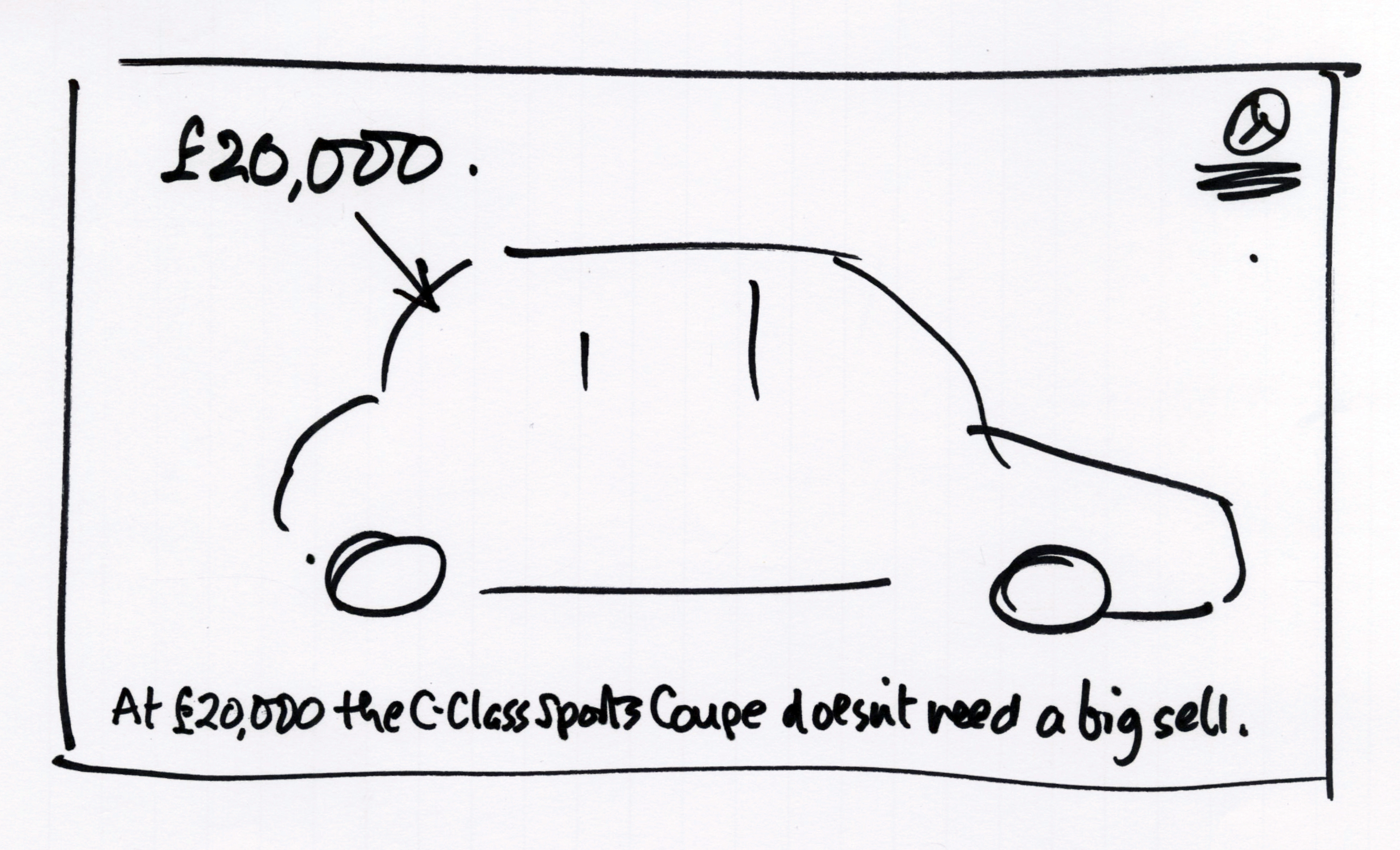 Jeez, so straight…and dull.
Can’t we lighten it with a bit of humour? 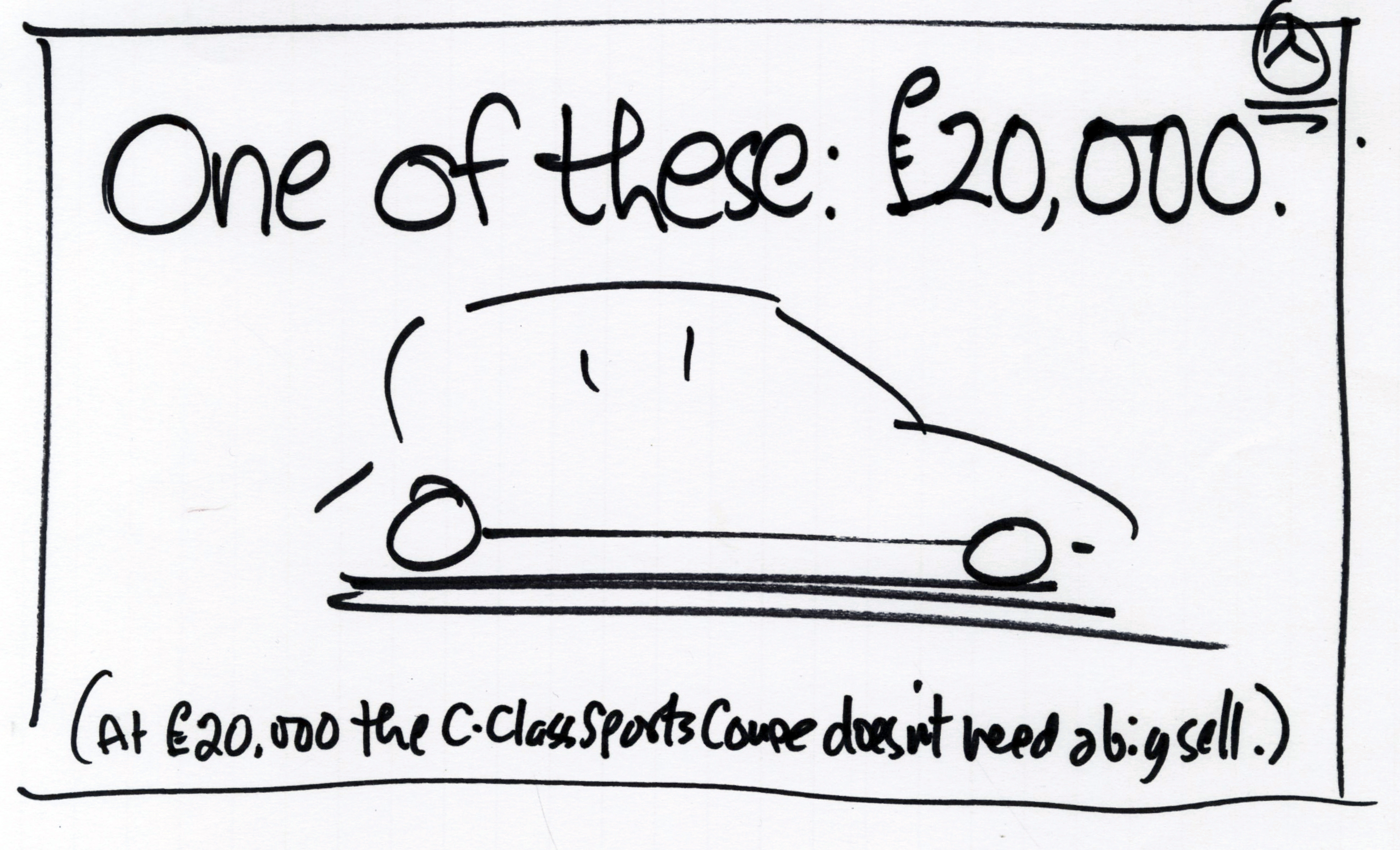 4% more interesting.
Maybe it needs to be more playful, to feel more confident? 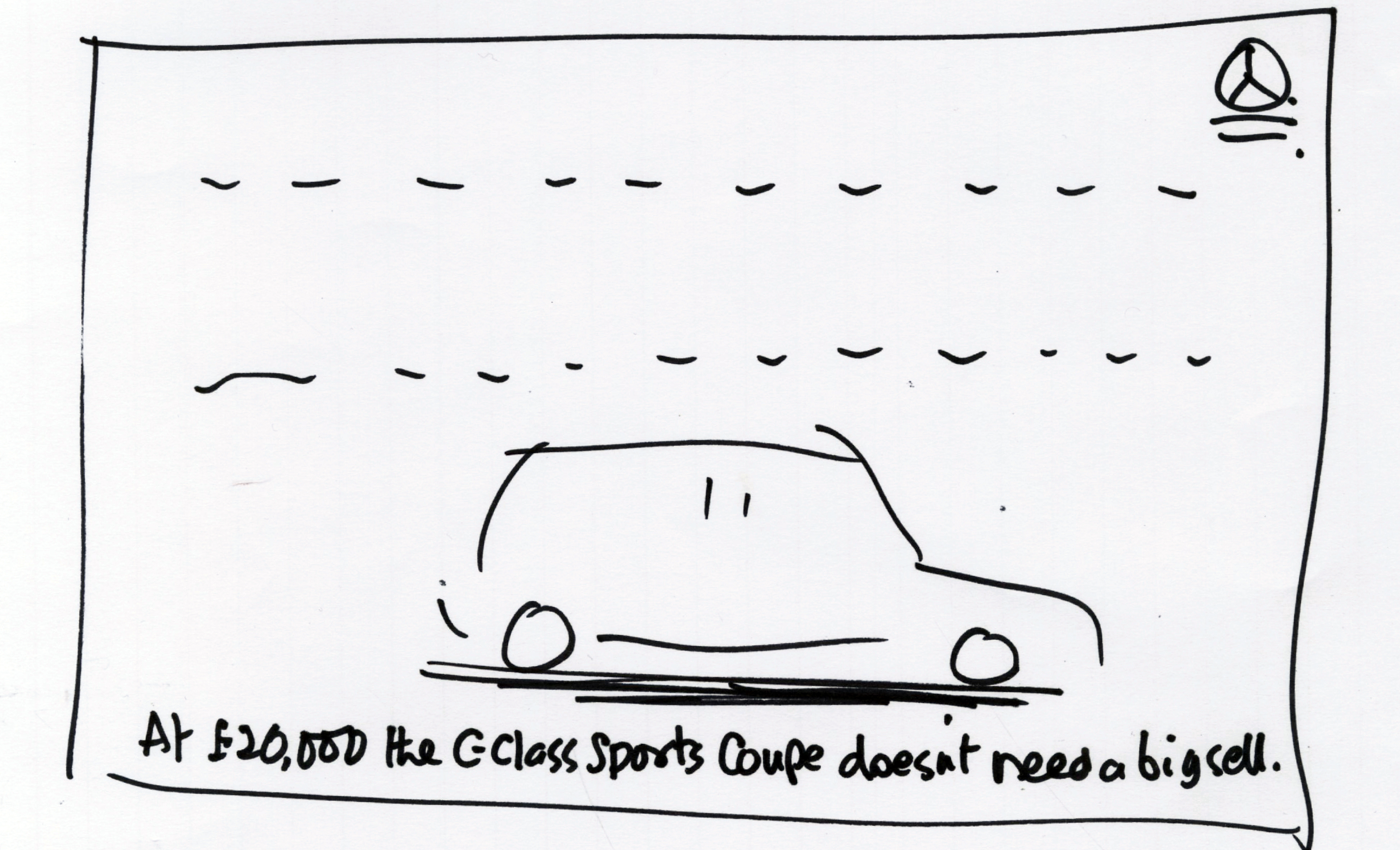 A bit gimmicky, it doesn’t feel sophisticated enough for Mercedes-Benz.
Maybe we have ridiculous underselling the car to intrigue and have a bit of fun? 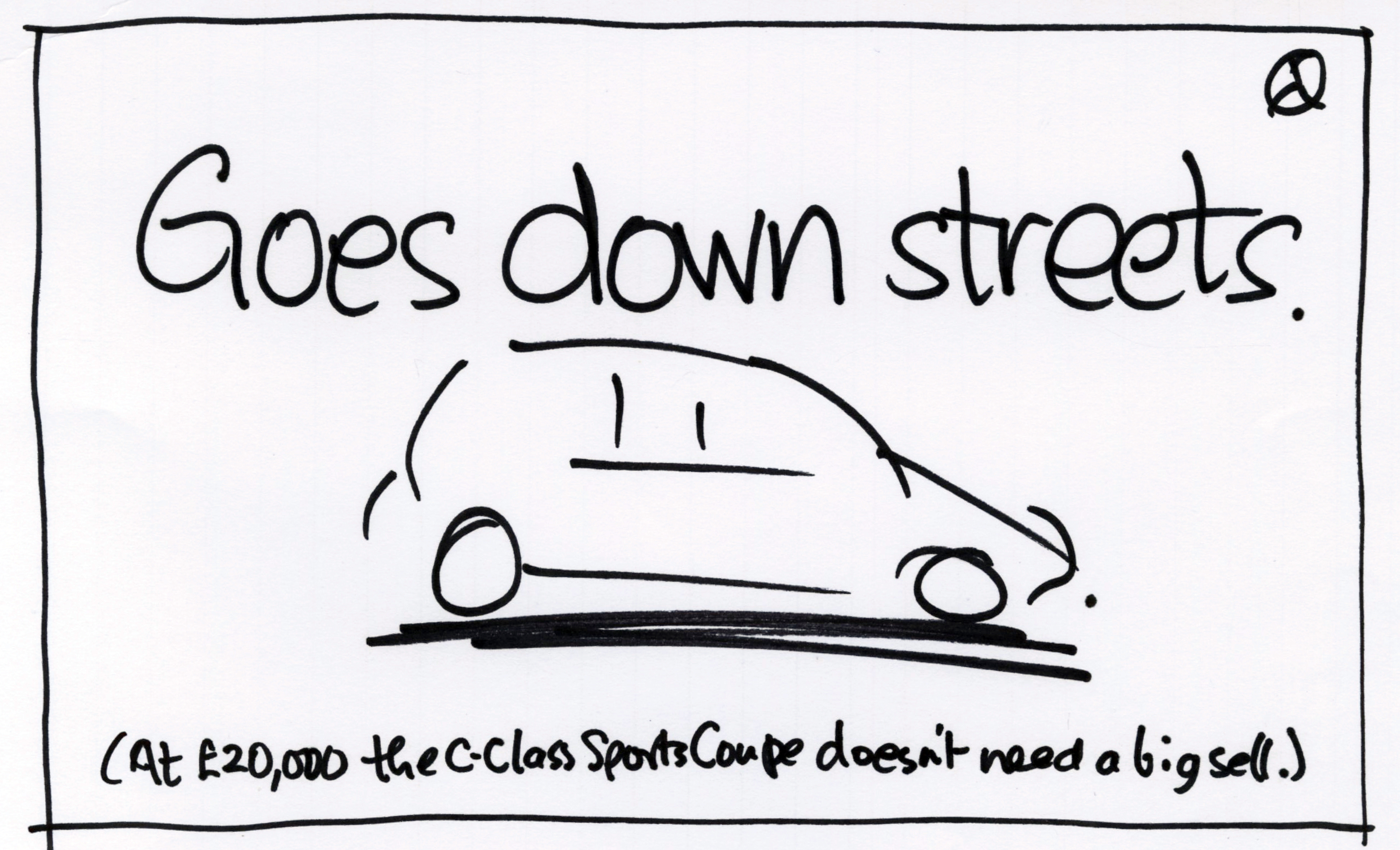 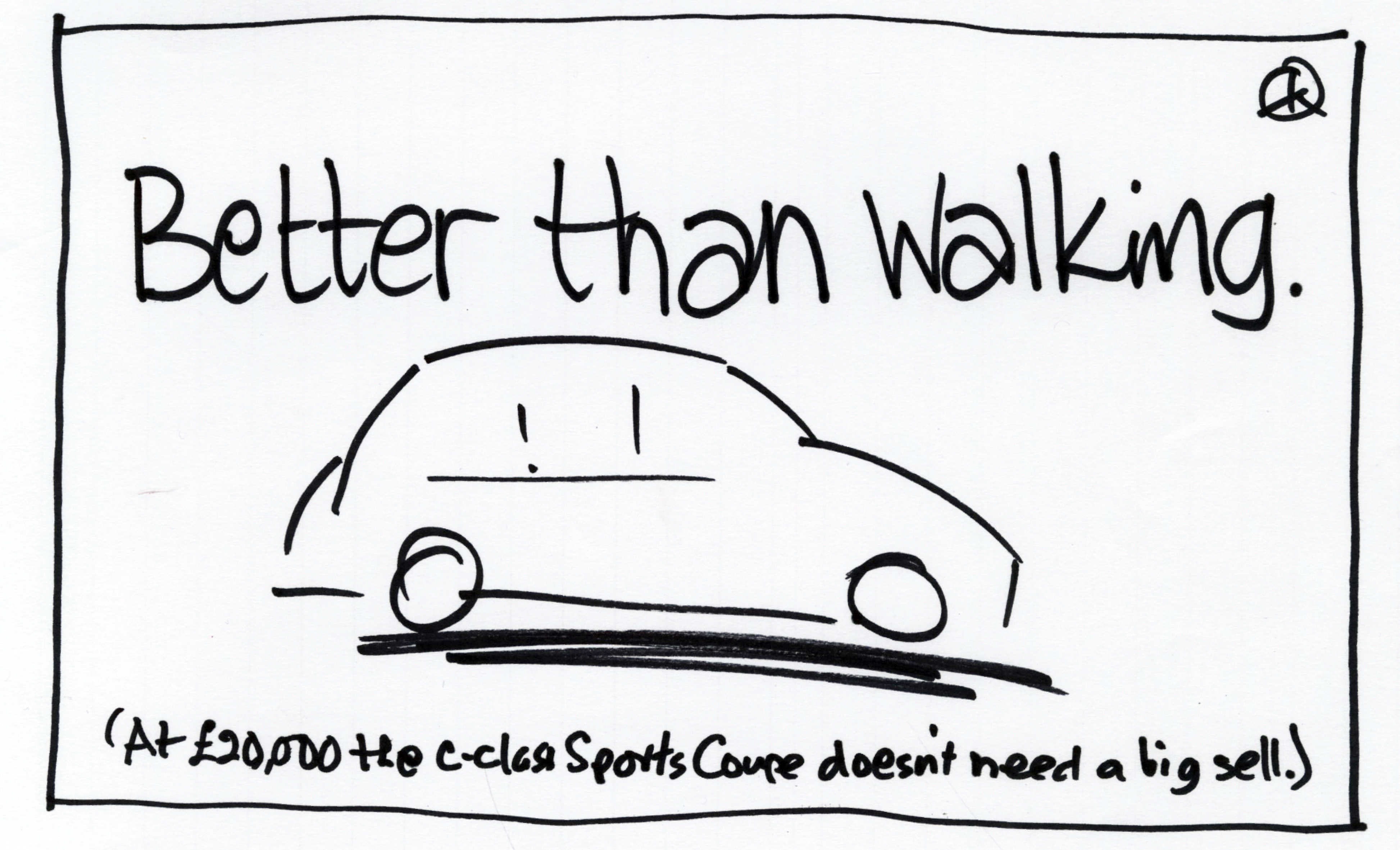 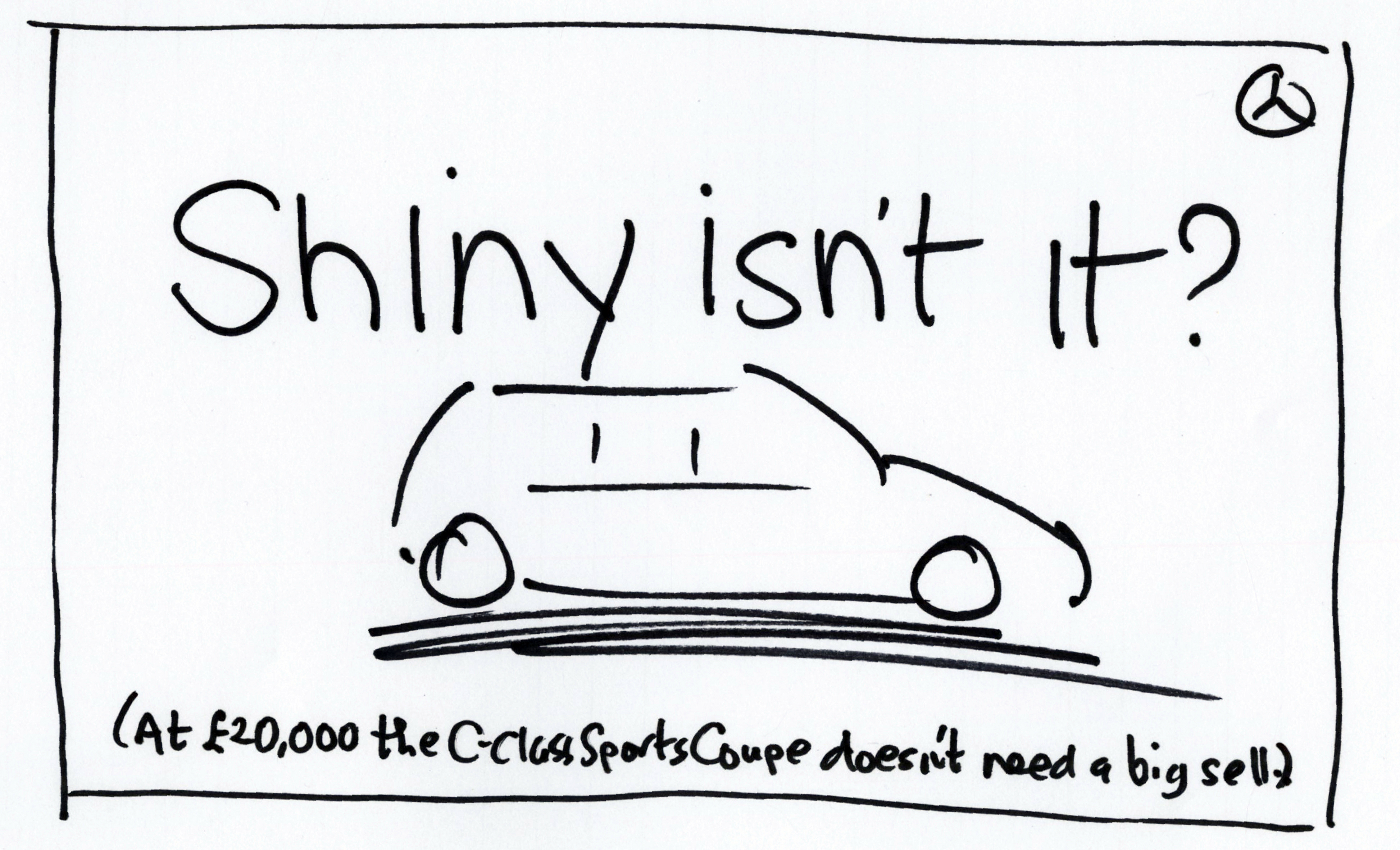 Better.
They now seem confident, almost cocky, and I’d defy anyone seeing them on the street not read the words underneath.
How should they look?

PHOTOGRAPHY.
The car needs to look precious and valuable for the idea to work, so shooting in a studio and having the lighting caress the car makes more sense than shooting it on the road.
Often the most exotic cars can be made to look ordinary by putting them in everyday situations.
So we are shooting a car in a studio, I’d worked with a lot of car brands; Bentley, Volkswagen, Porsche, Hyundai and Volvo, the people I didn’t like using for a job like this were ‘car photographers’.
They’re generally petrol heads, they know all the angles and tricks of how to make every detail of car look good.
But I find their pictures all look the same, regardless of the car or brand.
I prefer moods.
The first thing that appeals to someone about a photograph of a car isn’t how shapely the bodywork looks or how clearly defined the front grill is, it’s the overall feeling of the image.
Consequently I’d started giving car shoots to photographers who’d never shot cars before, I’d brief still life photographers like Guido Mocafico, Giles Revell and Coppi Barbieri saying ‘I don’t want a car shot, I want a beautiful, desirable still life’.
The results were always more distinctive.
I chose Ben Stockley, a very young photographer who’d just shot some Oxfam ads I liked.
Most car clients want their cars shot from the front three quarter angle, something like this. 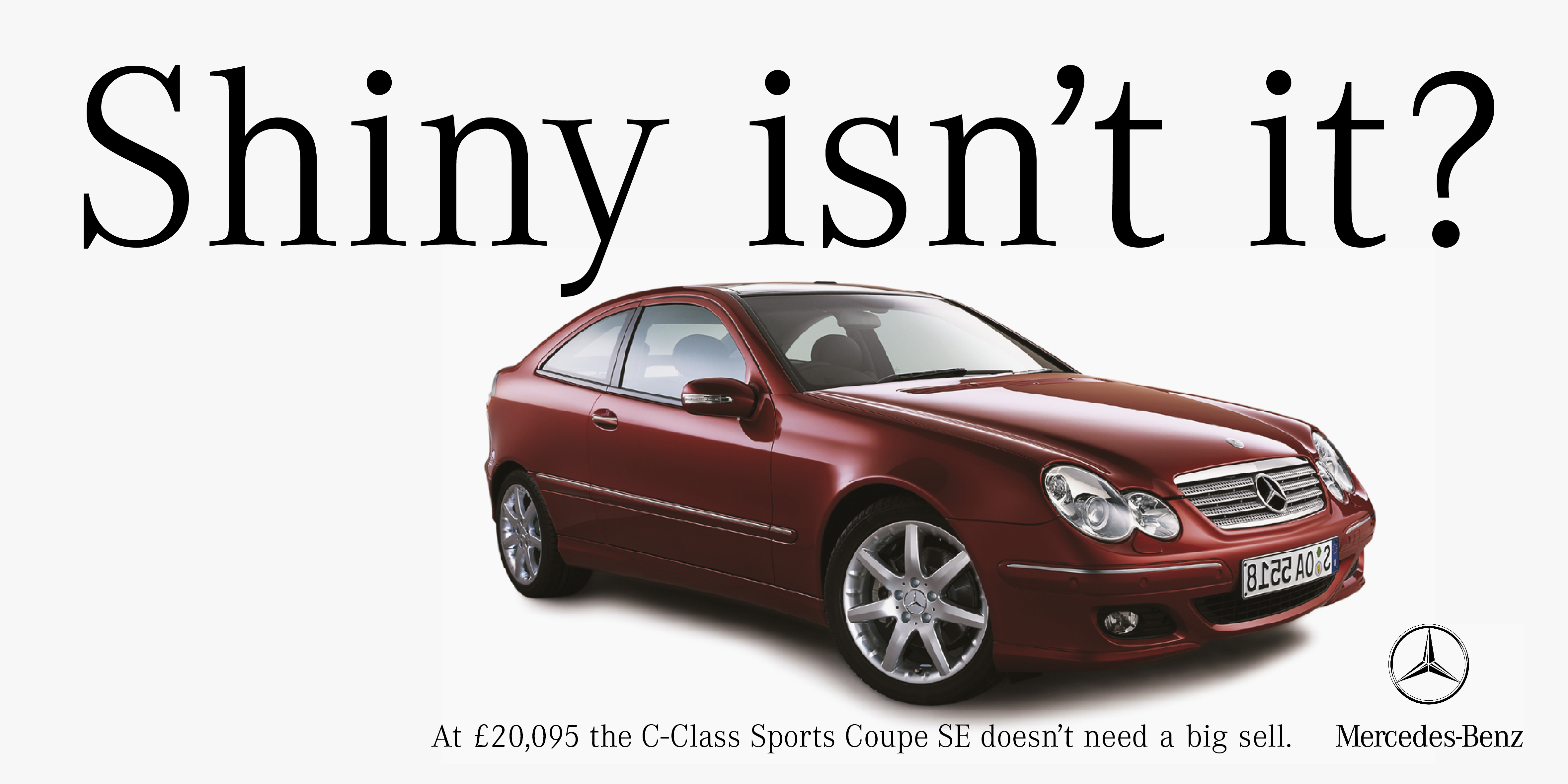 I prefer simpler angles, front on or side on like this. 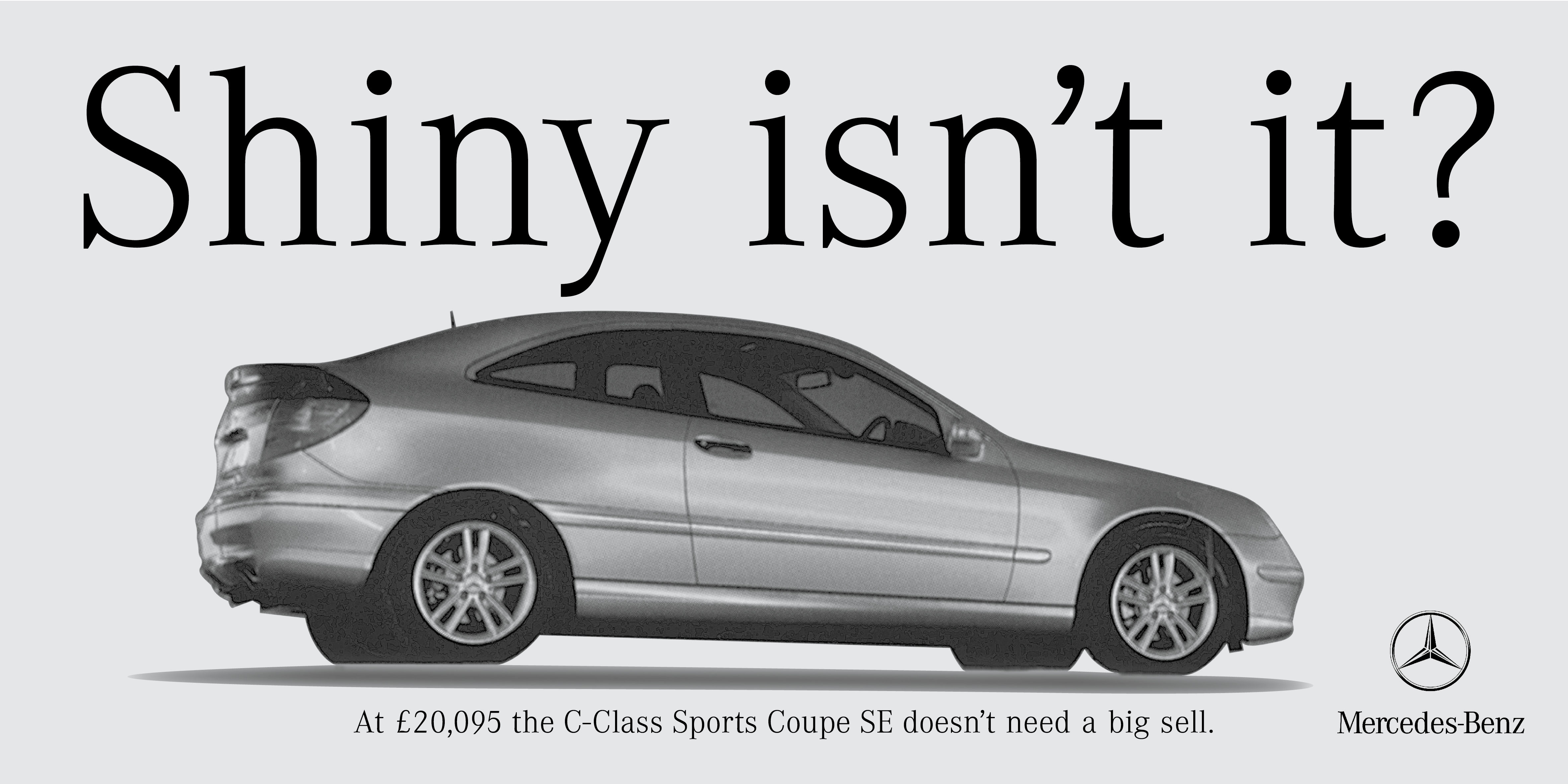 It’s easier to understand the shape of the car.
(If you don’t believe me try drawing the front three quarter angle of your car now.)
A compromise was done, we’ll shoot all the angles. 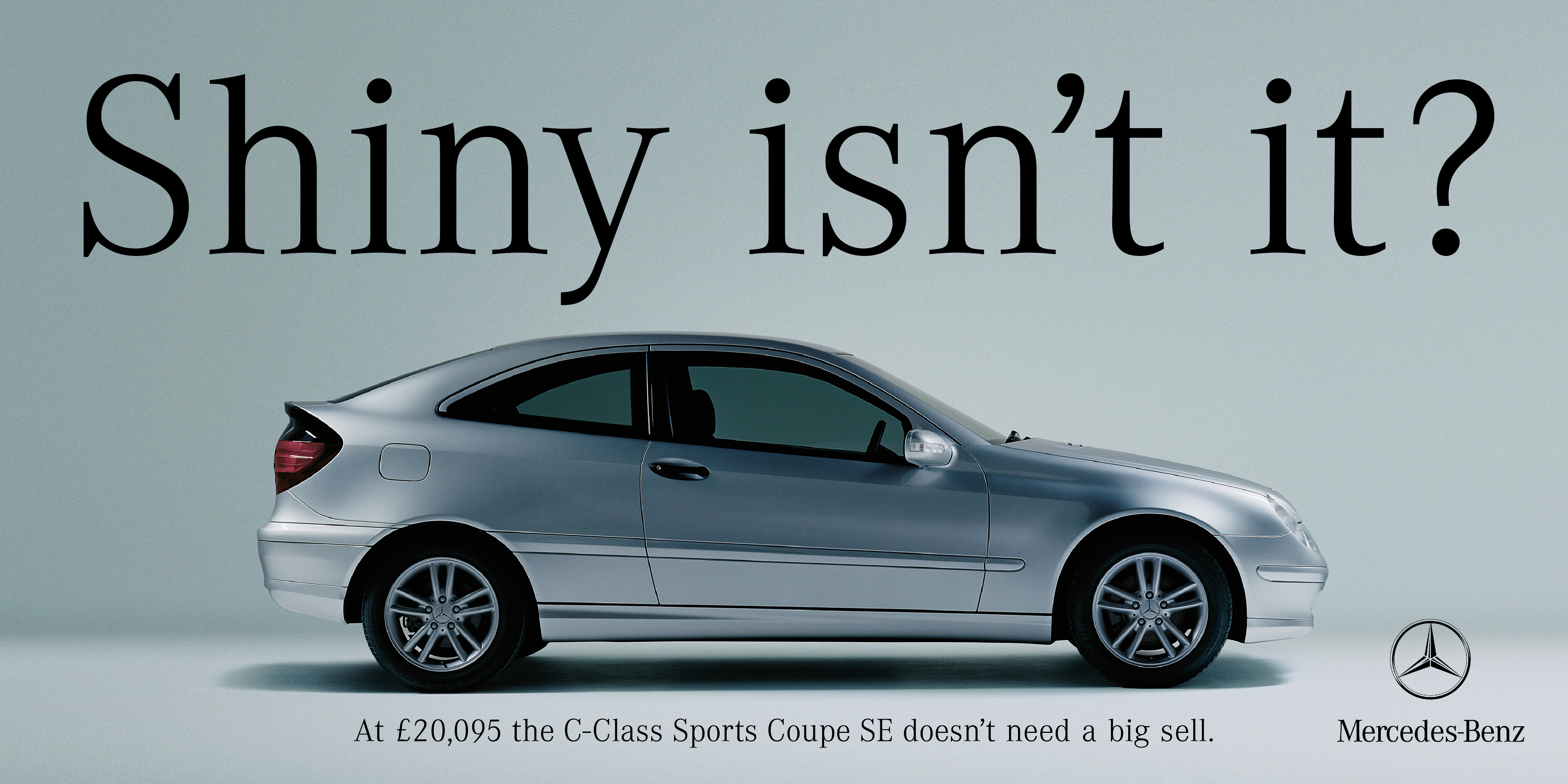 The almost duo-tone shot makes the car look expensive and desirable.
But the poster looks a bit ordinary, like every other car poster.
Maybe there should be less emphasis on the car and more on the idea, the words. 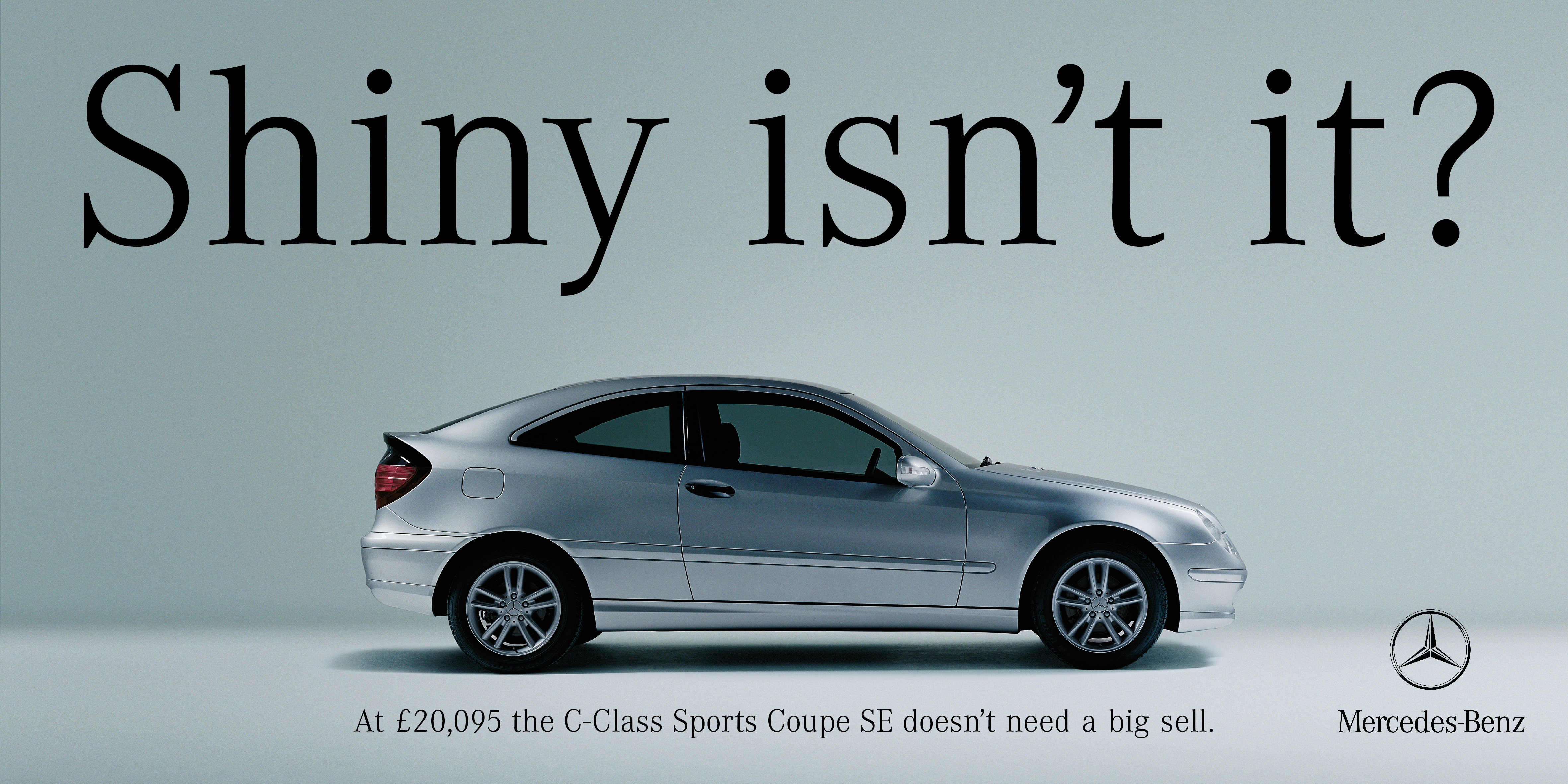 A bit better, maybe we should make it even smaller?
A few months earlier we had been taken on a factory tour, after seeing how it was made were taken to see the finished result.
We were taken to a giant white room, the size of a football pitch, occupied by a single car.
I asked why we were looking at the car in here and why was there only one?
Our guide explained that seeing the car from a distance was the best way to ‘get a sense of the vehicle’, it was how they assessed the shape of all their cars. 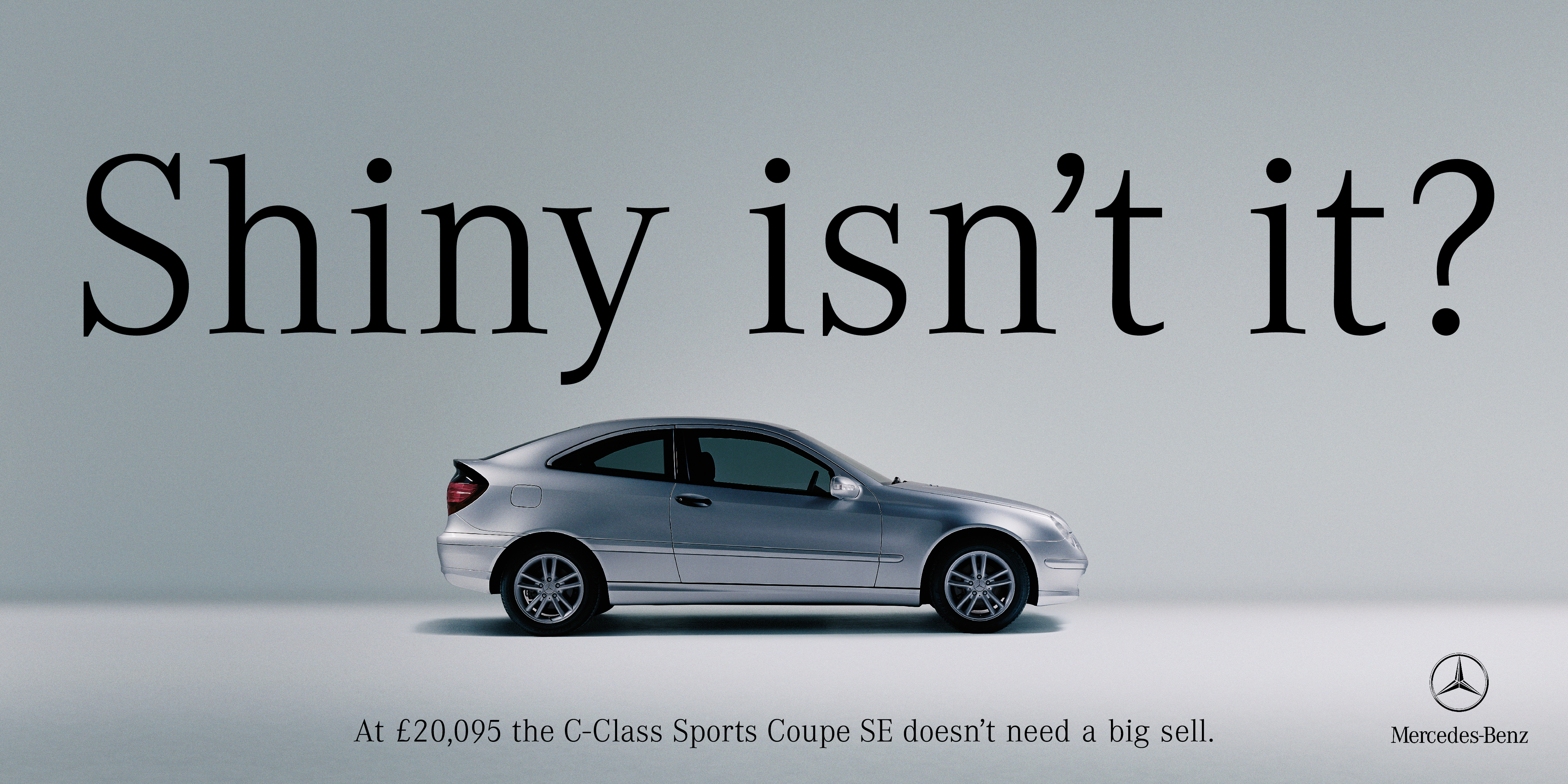 Looks better, classier.
Does the car float a bit in the middle?
Maybe it should be lower down, like it’s on the ground. 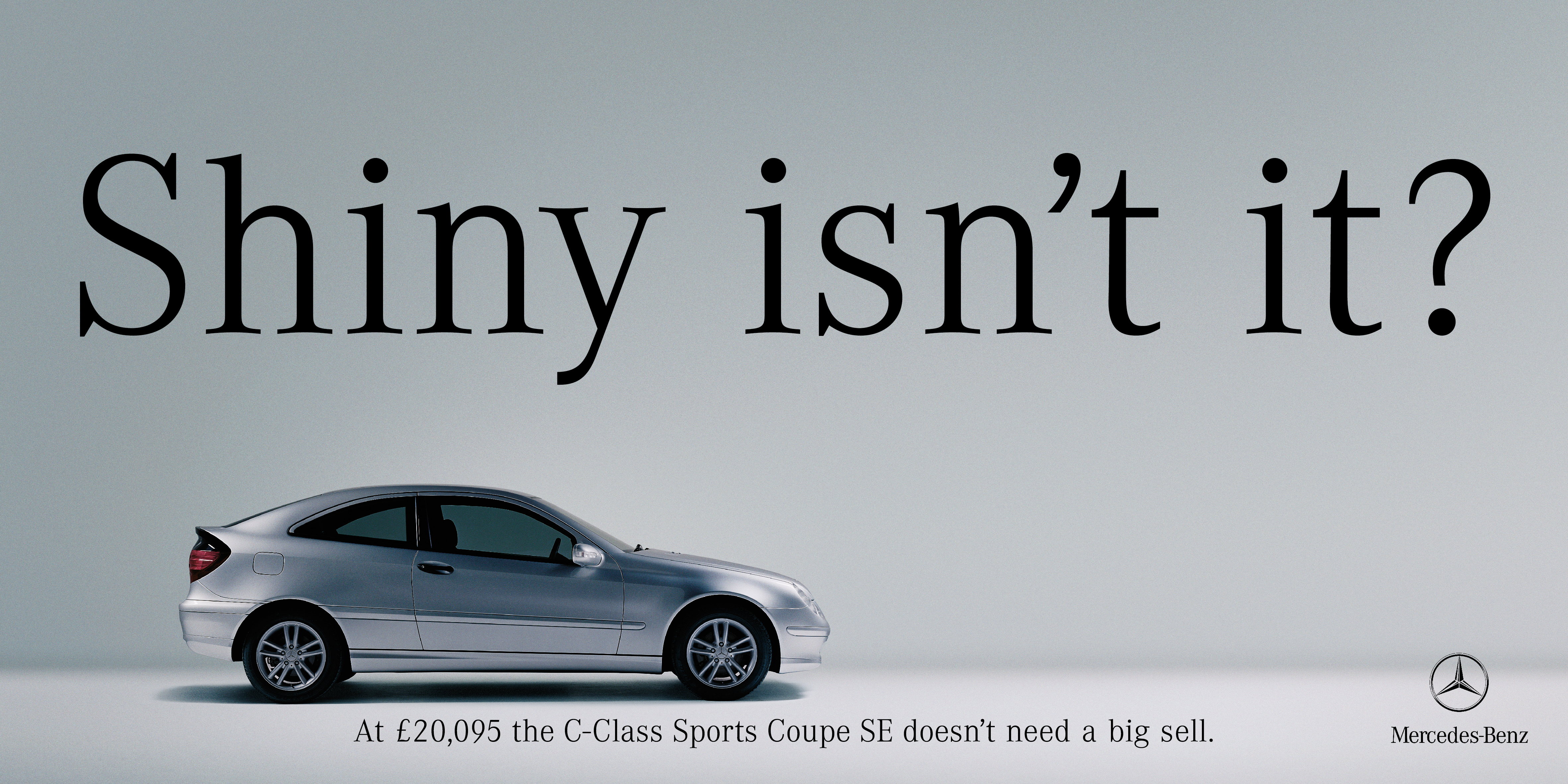 It looks better, it feels quite premium, but feels a bit old-fashioned.
I can’t think of anything else we can move or re-size, perhaps we could add a bit of graphics.
I remembered Paul Arden once saying that he tried to make everything perfect, then, at the end he’d make a ‘mistake’.
Instead of keep extending the background of the shot every-time  I made the car smaller, maybe I just place the shot, letting it end where it ends.
Also, there was one nagging doubt about the end-line, it’s the payoff, people will read these almost nonsensical posters and look to the bottom to find out what there about.
Having the snappily named C-Class Sports Coupe SE in there is getting in the way of the idea, let’s put the name else-where and let people make sense of the headlines as quick as possible. 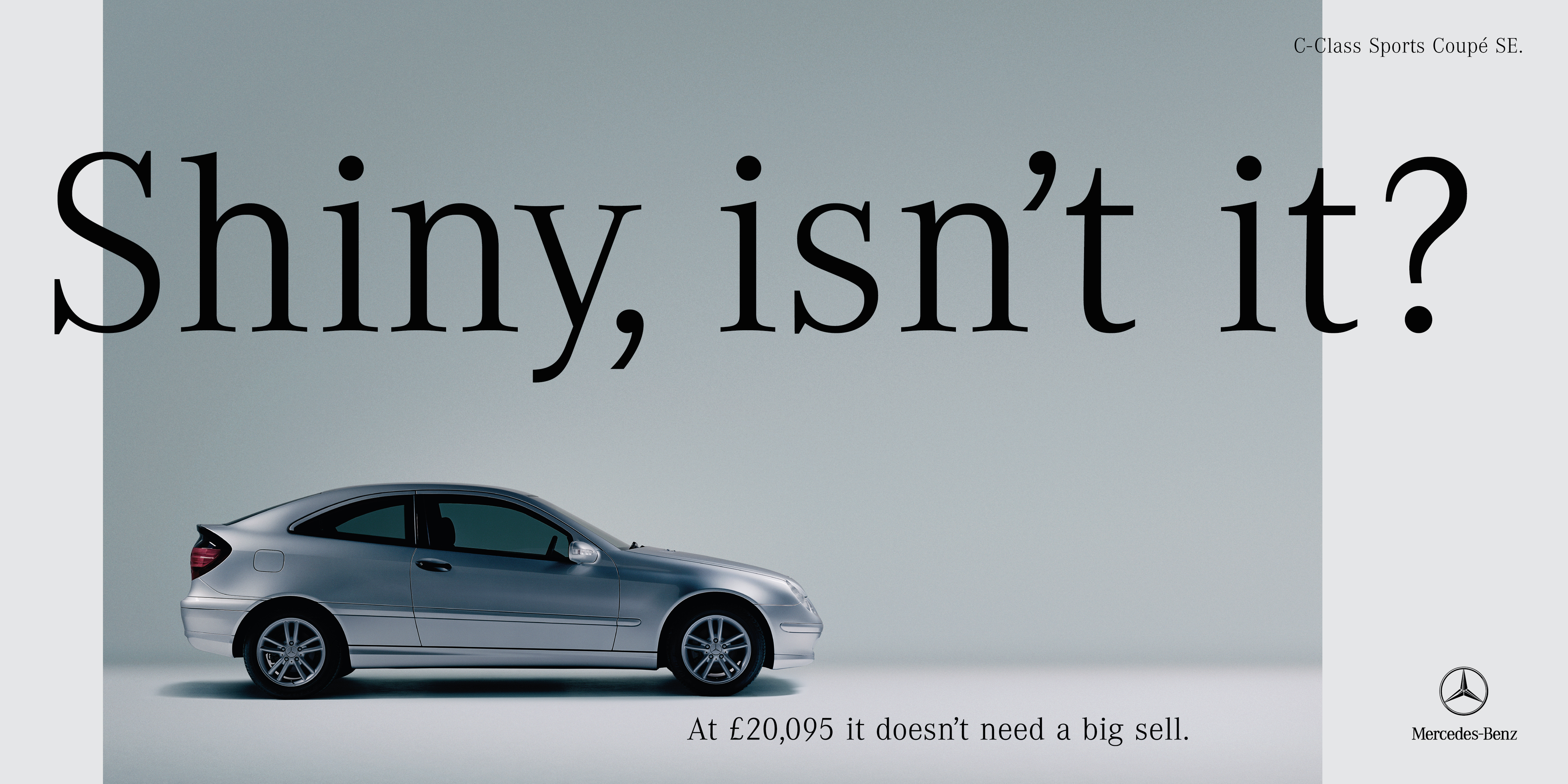 PRESENTATION TO CLIENT:
They liked them but ‘did our car really have to be so tiny?’
I told them these were 48 sheets, which meant the car would be almost life-size.
It didn’t move them.
I said it was crucial, as we were selling discounted Mercedes-Benz’s that our posters felt expensive and confident, not like sale ads.
It didn’t move them.
I reminded them of our experience in Germany where their very own experts had told us that seeing the car from a distance was the best way to ‘get a sense of the vehicle’.
They said ok.

PRESS.
A few days later they pulled some press ads for another model.
Bingo! We had a whole bunch of full-page ads that needed filling with the most unimpressive car headlines we could think of. 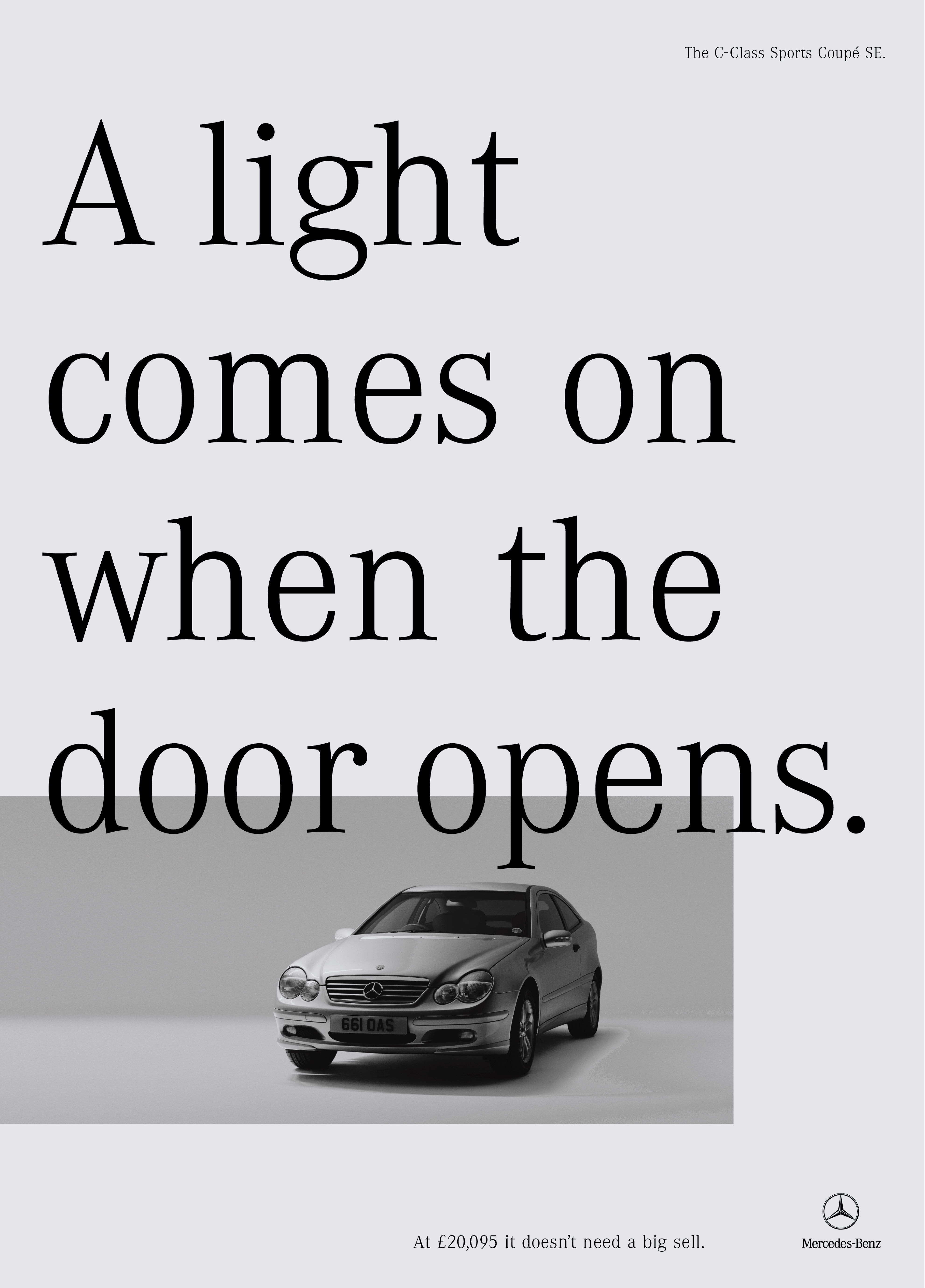 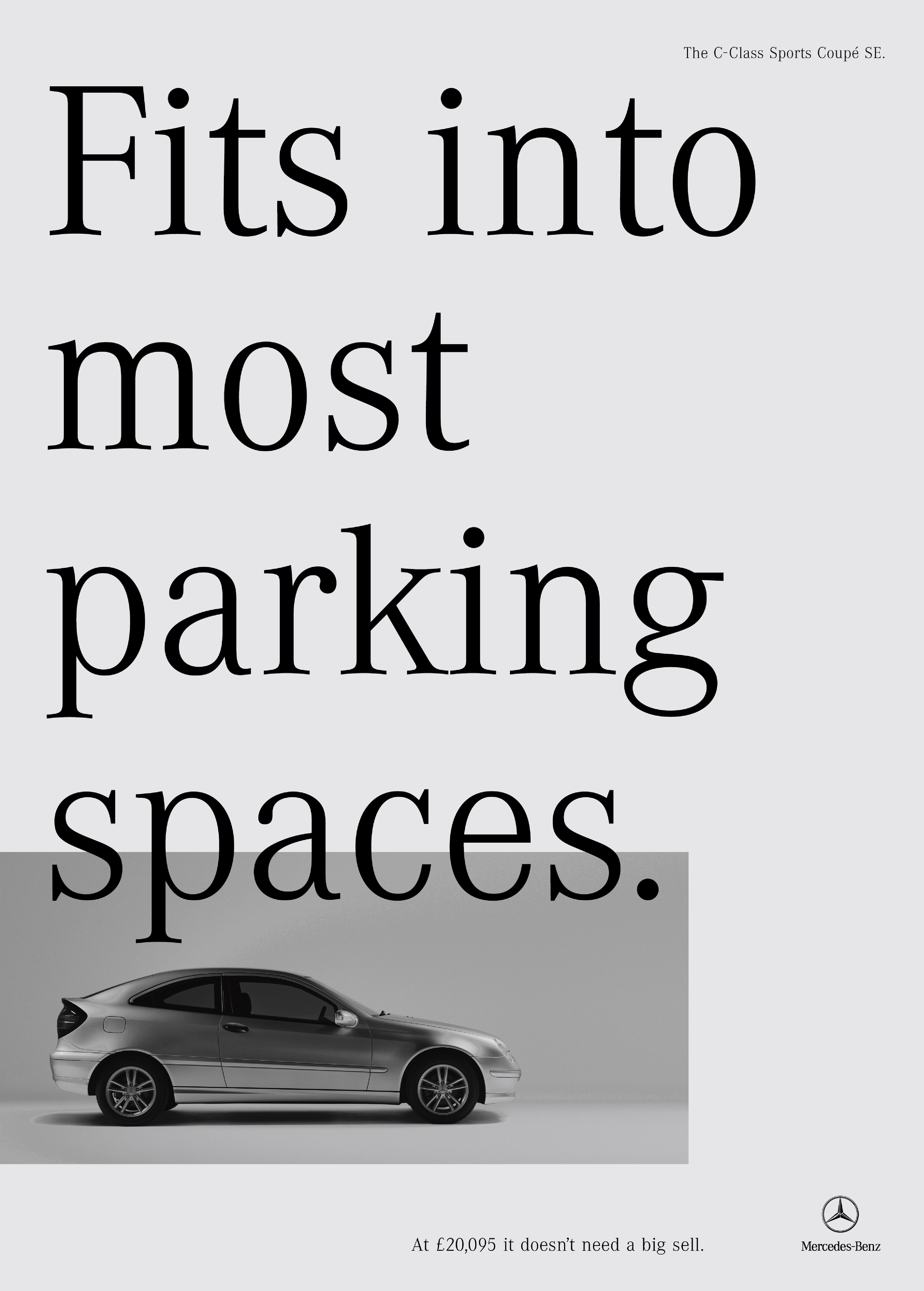 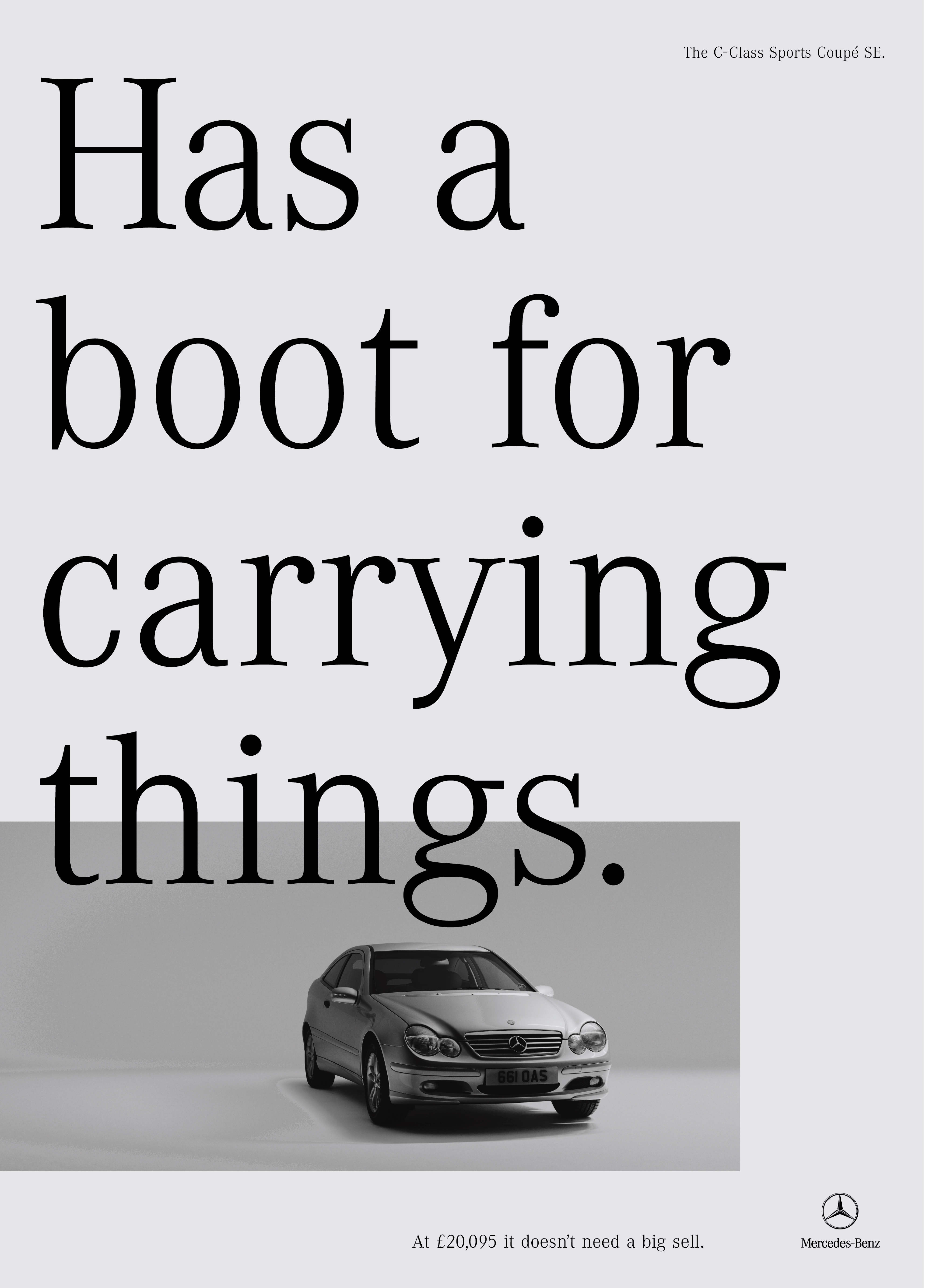 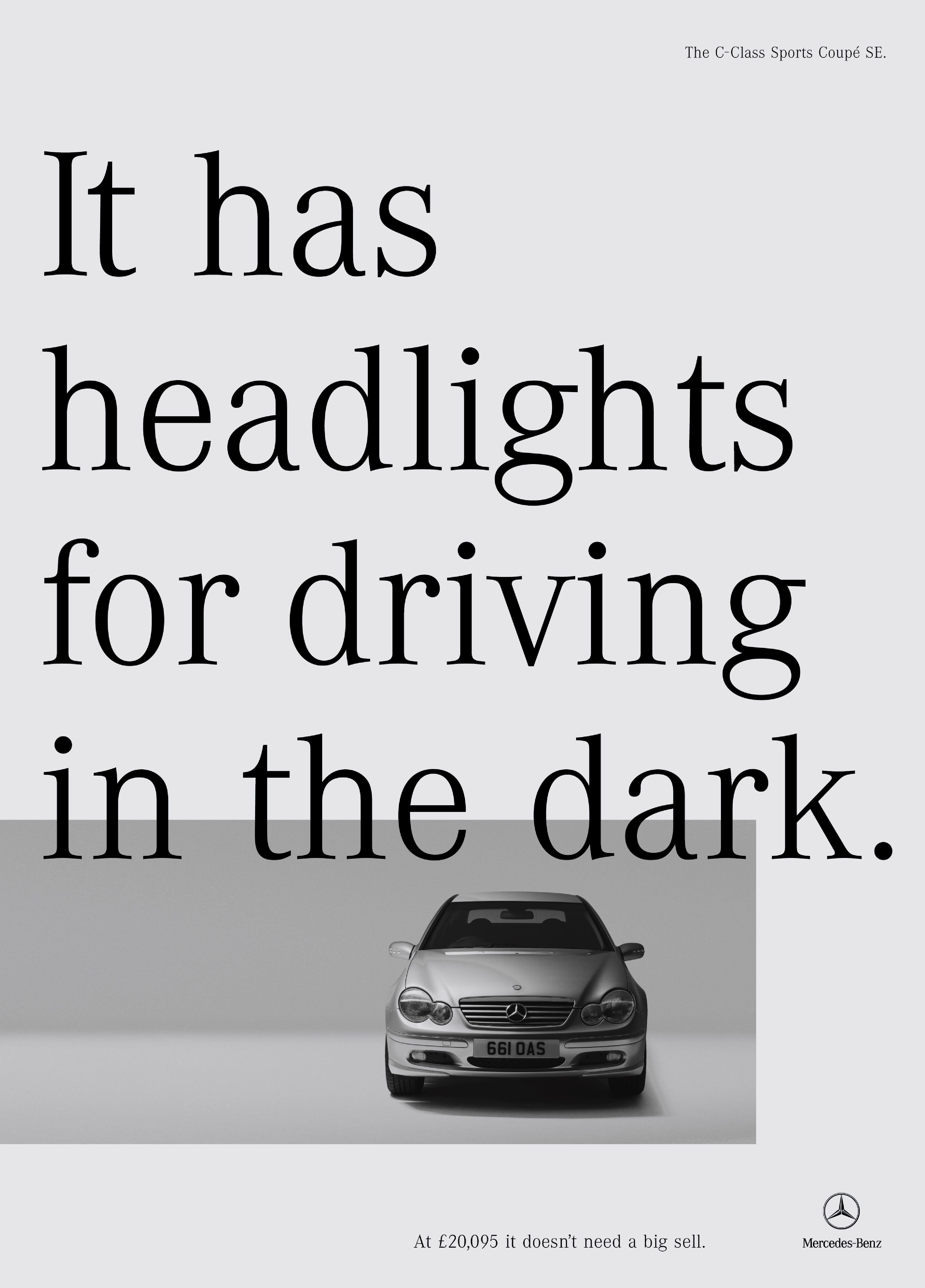 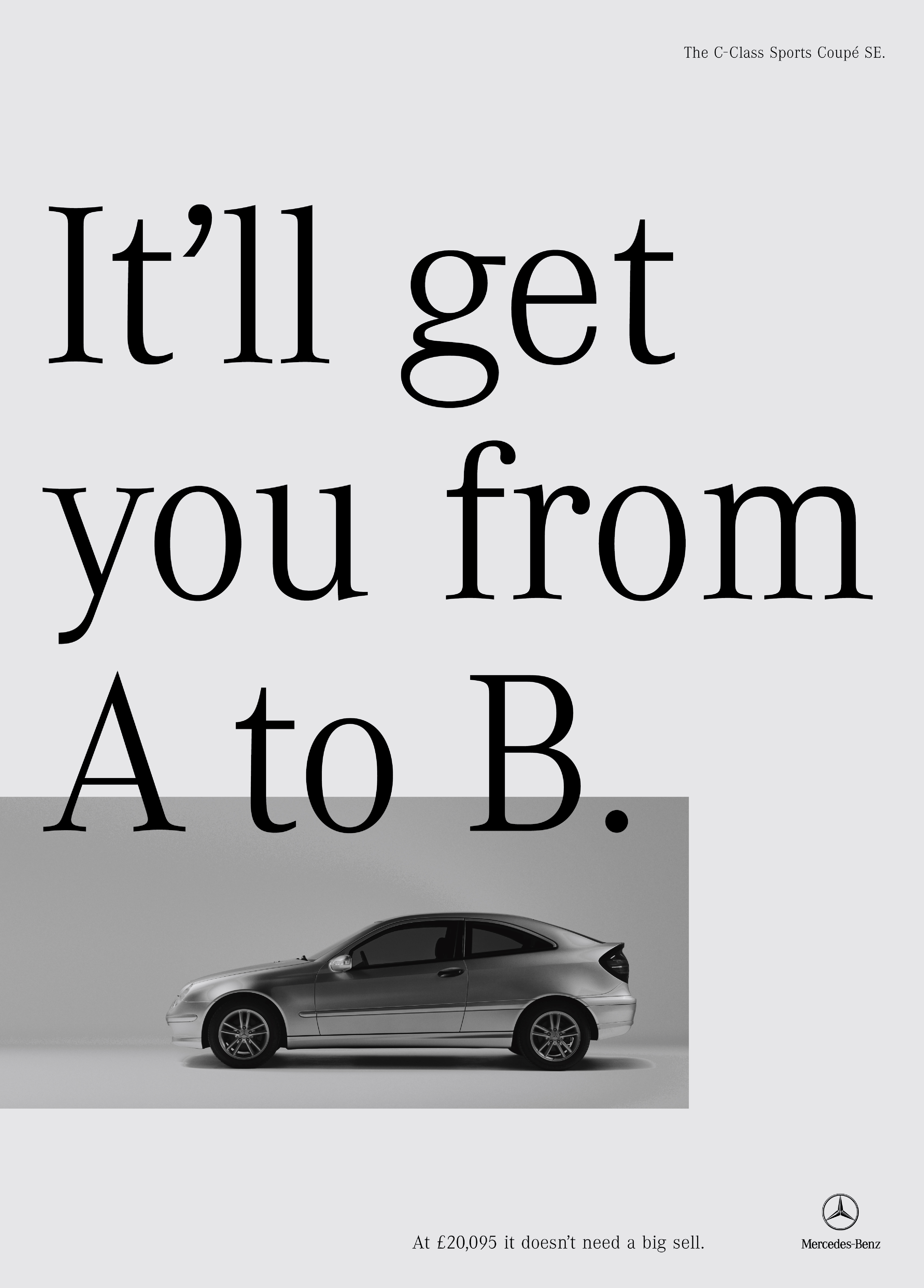 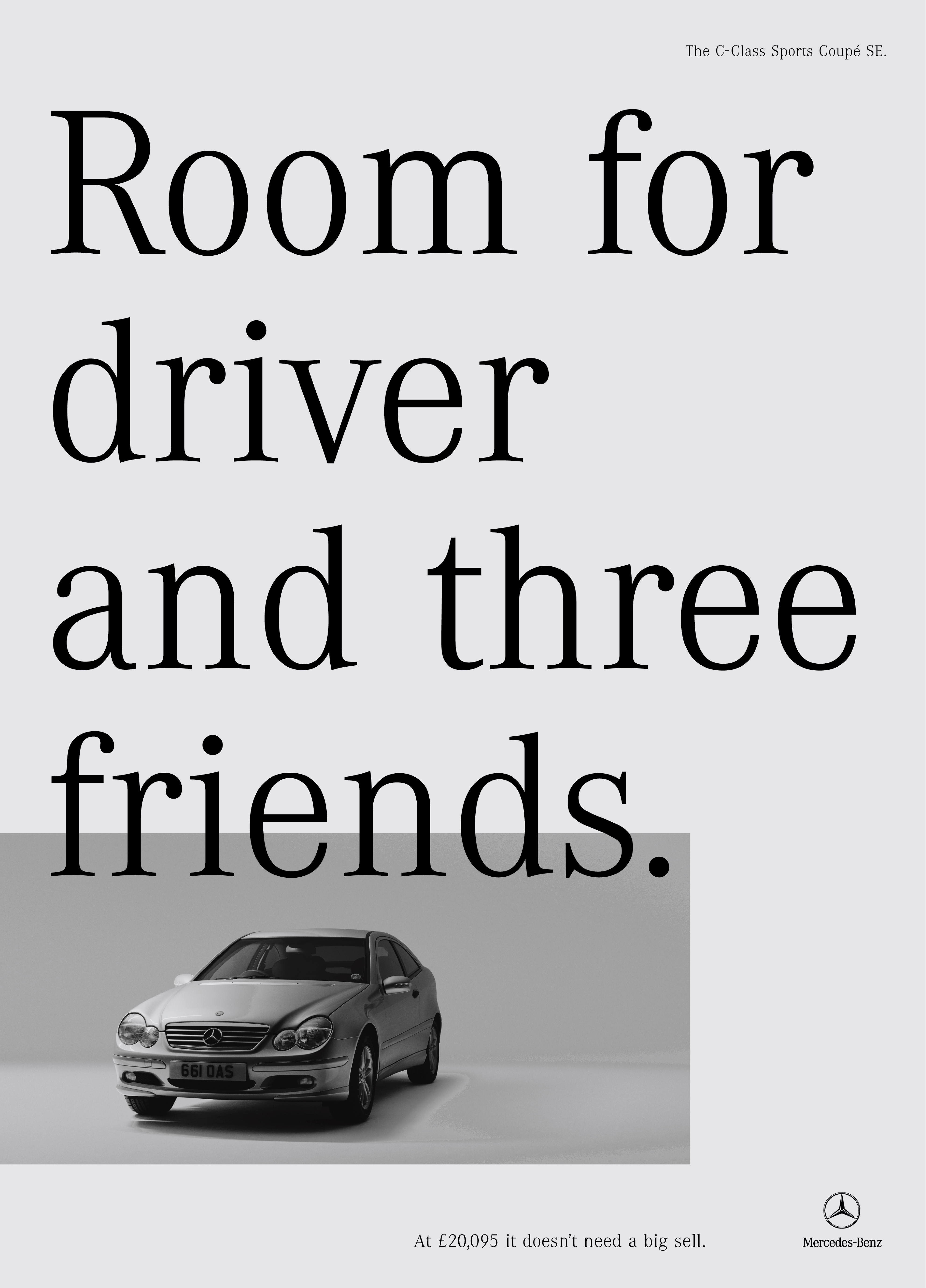 OPINION:
We were really excited to see the work out there, it was just so, and I hate this word; disruptive, how could people not wonder why Mercedes-Benz were now saying their cars were ‘better than walking’, then check out why, then smile.
Job done.
Unfortunately not, they didn’t see it that way up in Milton Keynes.
Our clients received an incredible amount of feedback from their colleagues; ‘Is that the best thing we can say about a twenty grand car? It’s better than walking?’, ‘You are making it impossible for us to sell these cars, you’ve tuned them into a joke’ or simply ‘Shiny? Seriously?’.
All the feedback was bad.
Opinions from a wide range of employees in Milton Keynes were sought.
‘Everyone had an opinion, the ads were very polarising, people either loved or loathed them’.
It turned out that most of the initial feedback was from the dealers or people tasked with selling these cars.
It became a big issue for us and them, questions ranged from do they have the right approval process to do we know what we are doing?
It rumbled on for months.

RESULT:
Finally, our most senior client came in with his team to report on a big meeting he’d had on the numbers earlier in the week.
‘Basically, we’ve sold nearly twice as many C-Class Sports Coupe’s than our most optimistic prediction, so whether people like the ads or not they sold a helluva a lot of cars.
Well…it could’ve been the good weather…or the great deal, there are a number of factors, but we know they didn’t harm us, they weren’t a disaster, we need to stop talking about these ‘Big sell’ ads.’