‘I’m trying to do a deal with the guys at Piebury Corner.’
Former boss, mentor and mate, Mark Denton continues ‘If they supply pies for my book launch I’ll supply ads for free. Can you do me some free ads?’
Mark has lined up a photographer to shoot them for free ‘So we just need a few idea, hopefully with nice pie shots in.’ 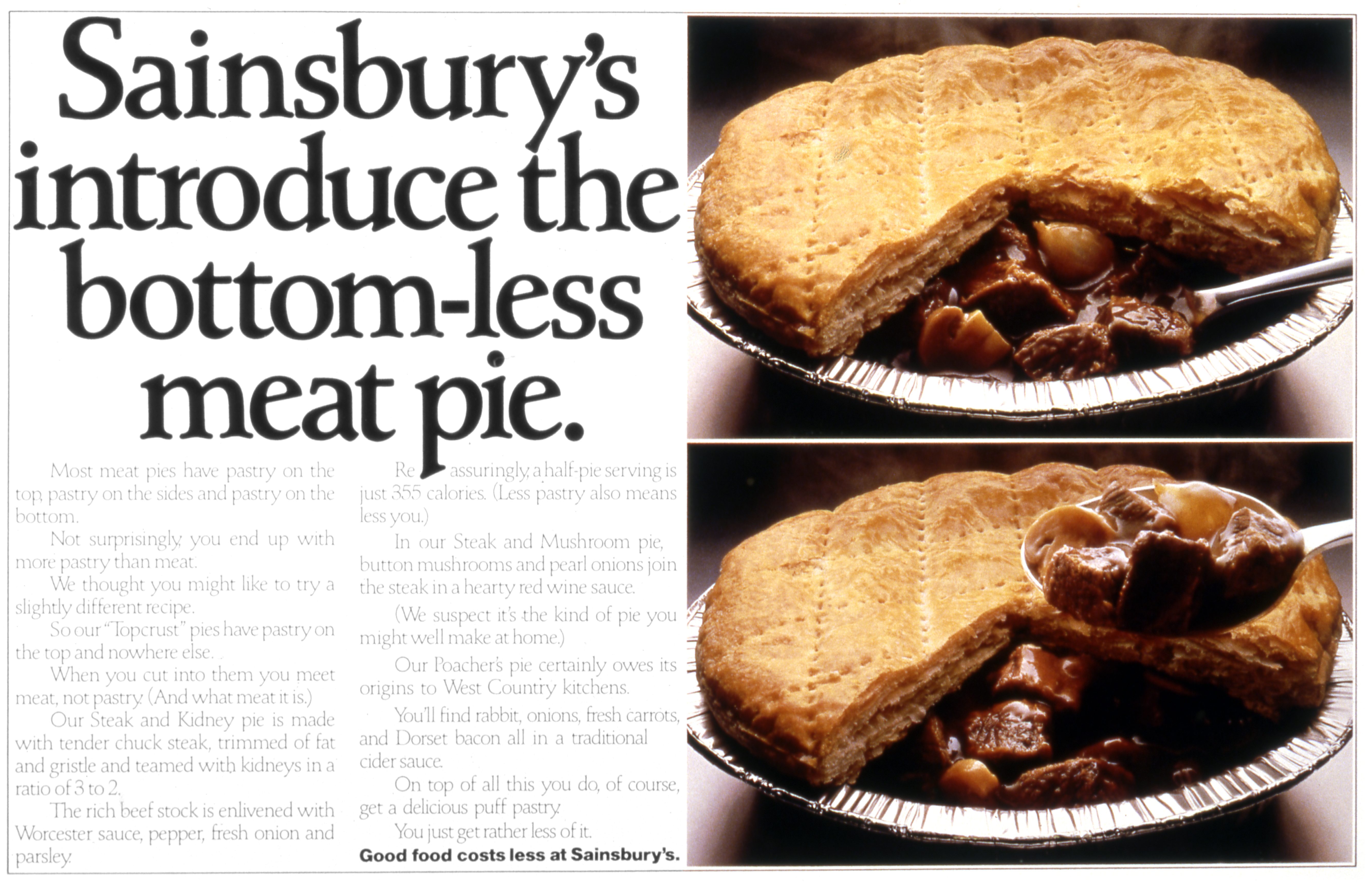 That’s what Ron Brown & Martyn Thompson did with pies, one of the best art director/photographer combos of the last century, nice, but not amazing.
But then again, how else are you going to shoot a pie?
I ignore that question and start thinking about another one –  What the hell can we say about our pies?
I guess they feel a bit olde-worlde, a traditional British alternative to the invasion of new-fangled foreign foods? Pies like the old days? Old-fangled pies? 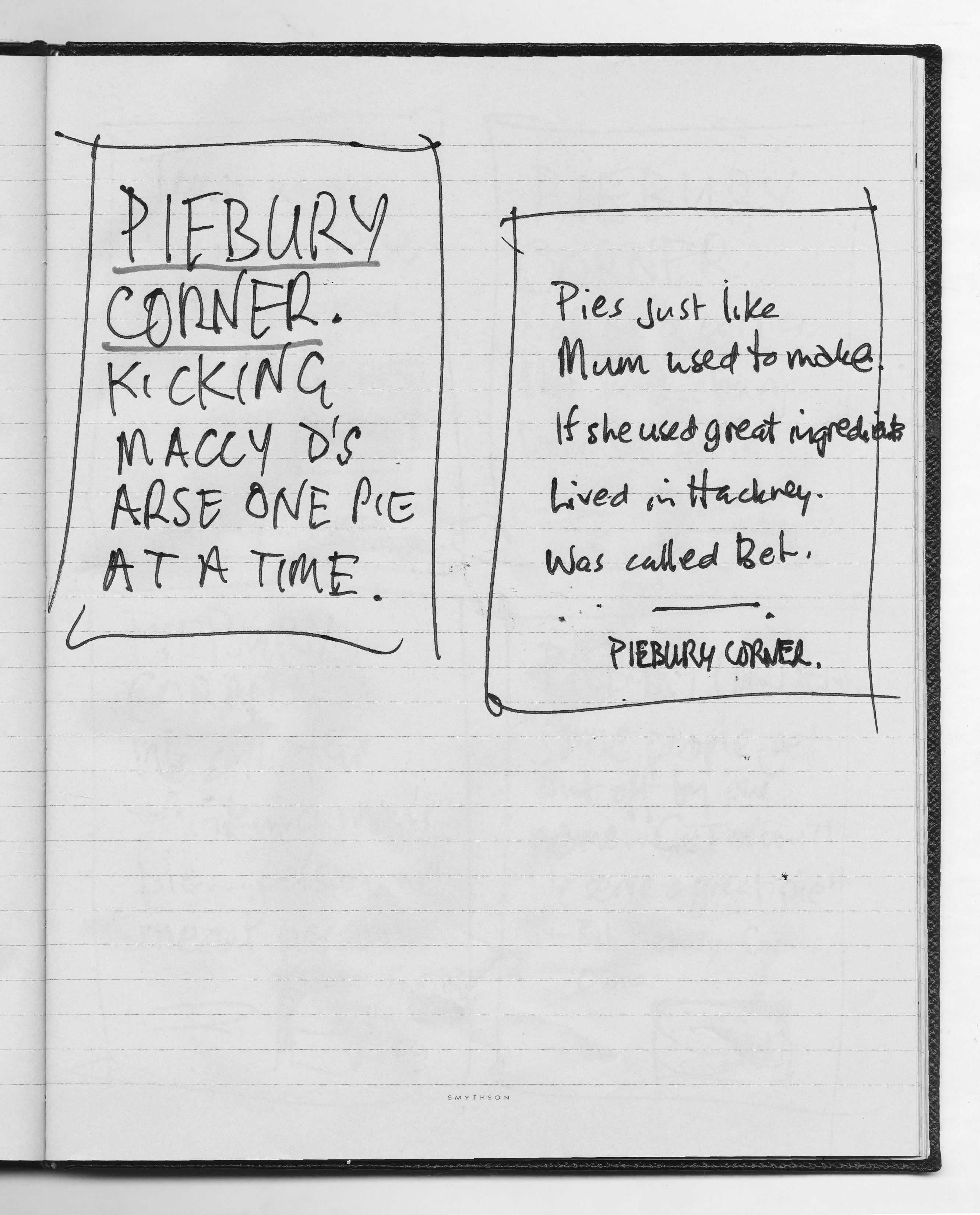 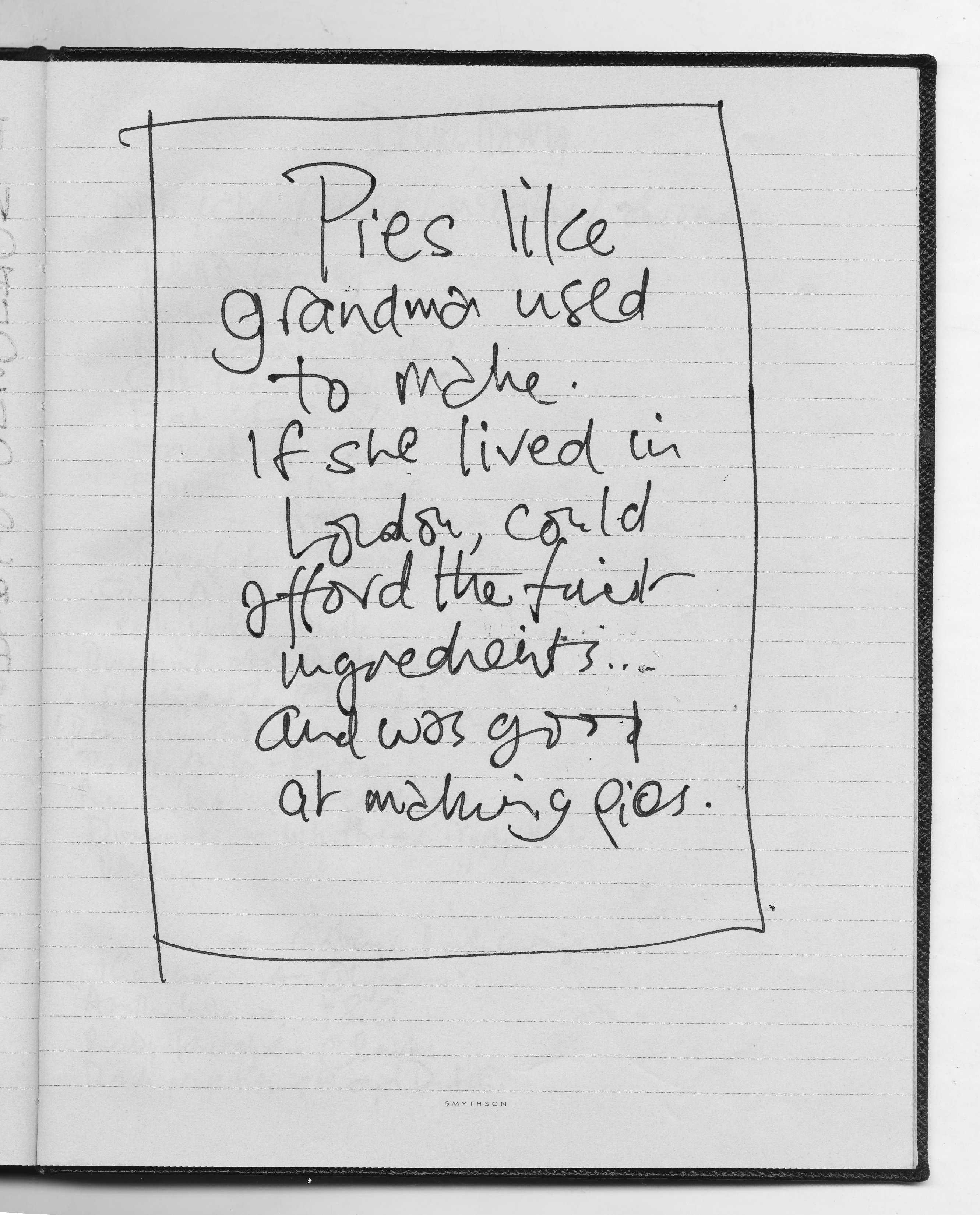 The more I thought about it the more I felt like I had to address the elephant in the room; the pun.
It’s a distinctive name, very London, maybe we address the name? 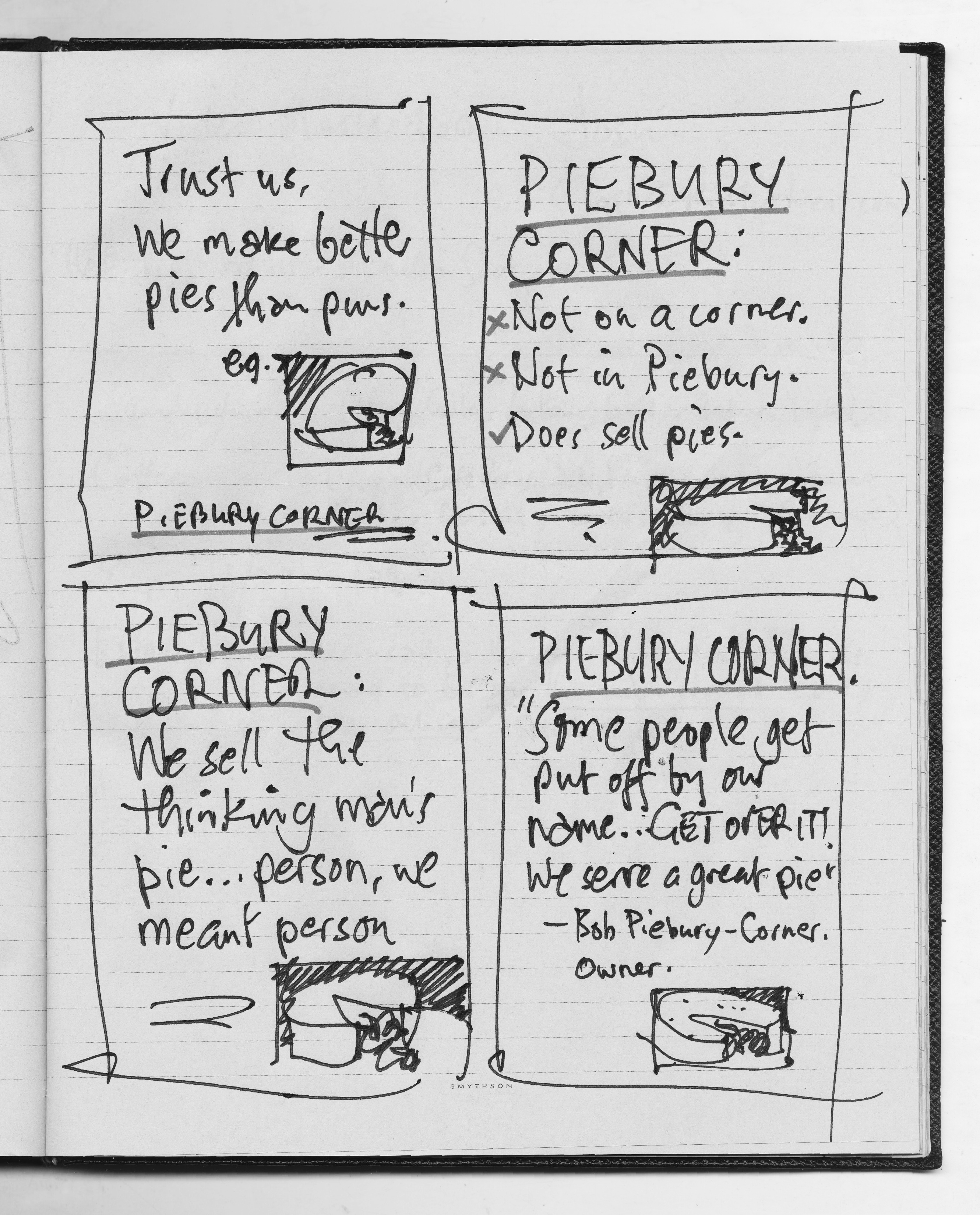 If we’re going to talk about the pun, instead of apologising for it, perhaps we should embrace it?
Focus on getting people to remember our name rather than justifying our pie ingredients.
The only problem; I hate puns, they make me wince. (I’ve just written an article for Shots about why puns are such a low-rent advertising solution.)
But then again, they’re called Piebury Corner.
Sod it, I’ll write some puns. 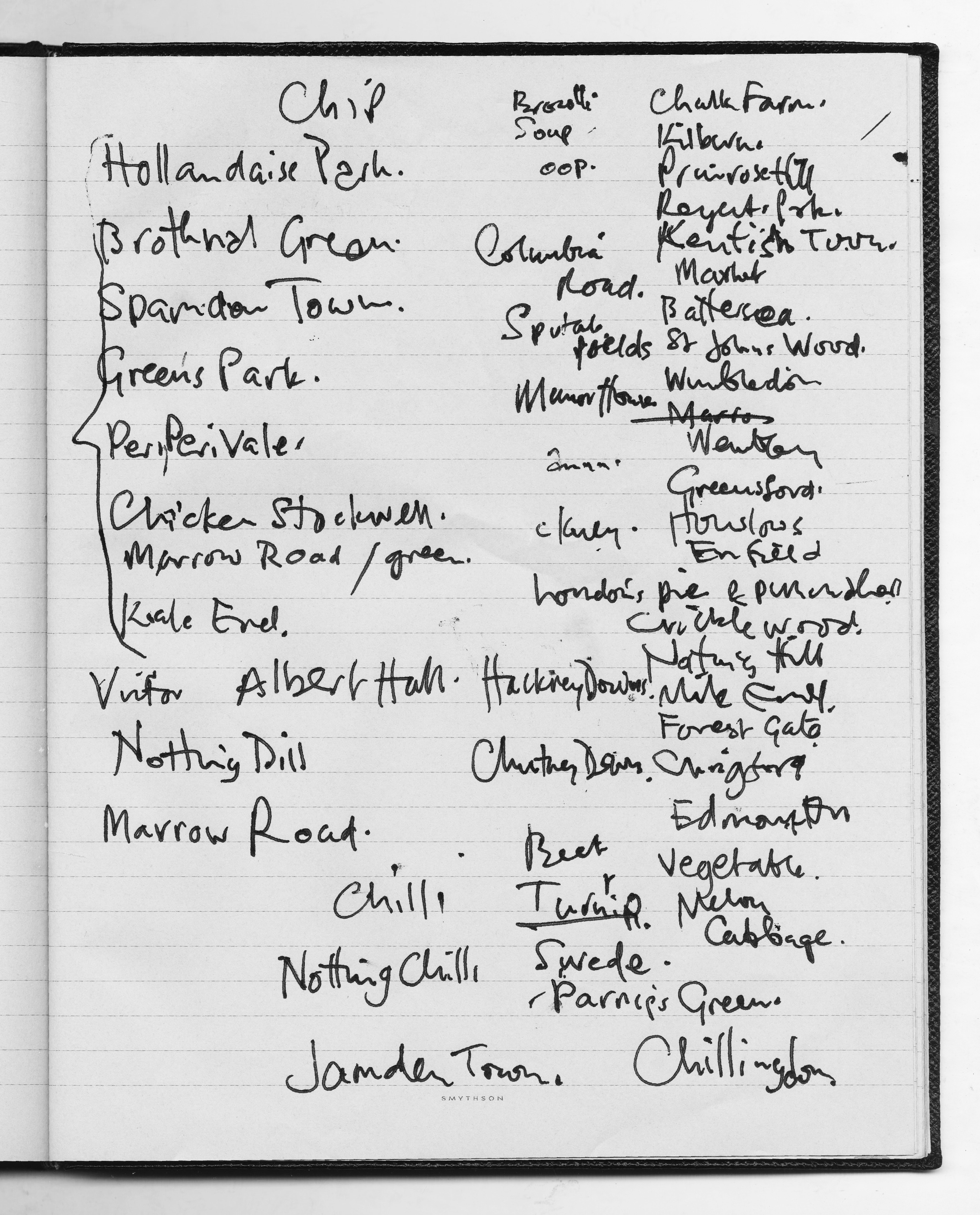 Maybe a list of London locations turned into puns?
More like a poster you’d buy than an ad?
Hang on, what about the photographer? He needs specimens for his site.
Let’s have small pictures of the pun element next to the words. E.g. A picture of a pie next to ‘bury Corner’, a picture of a brussel sprout next to ‘Square’, etc. 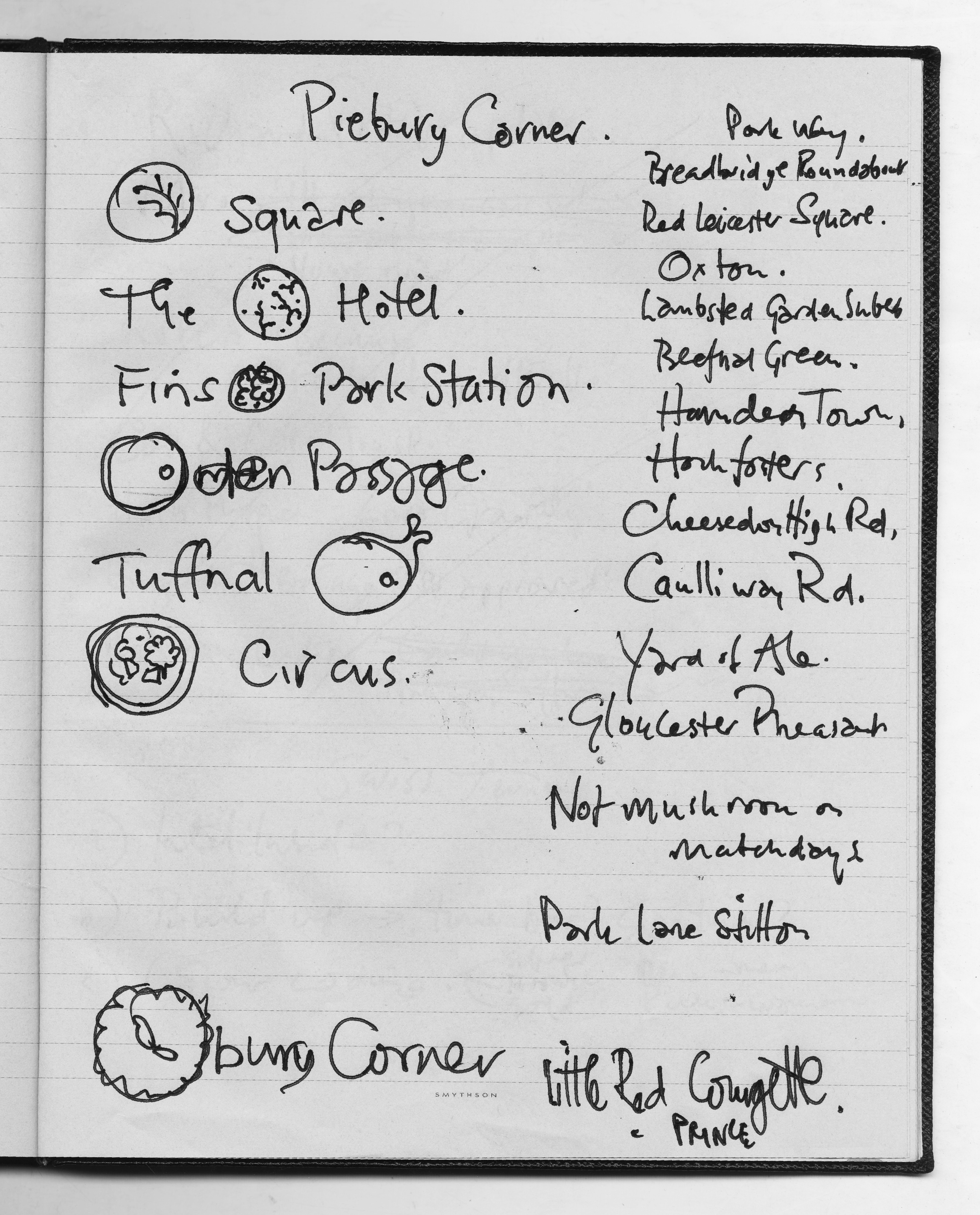 It could be engaging, well branded, very Londony.

Ok, the vomit draft.
Lets bash one of these things together, it’s gonna look great, I just know it! 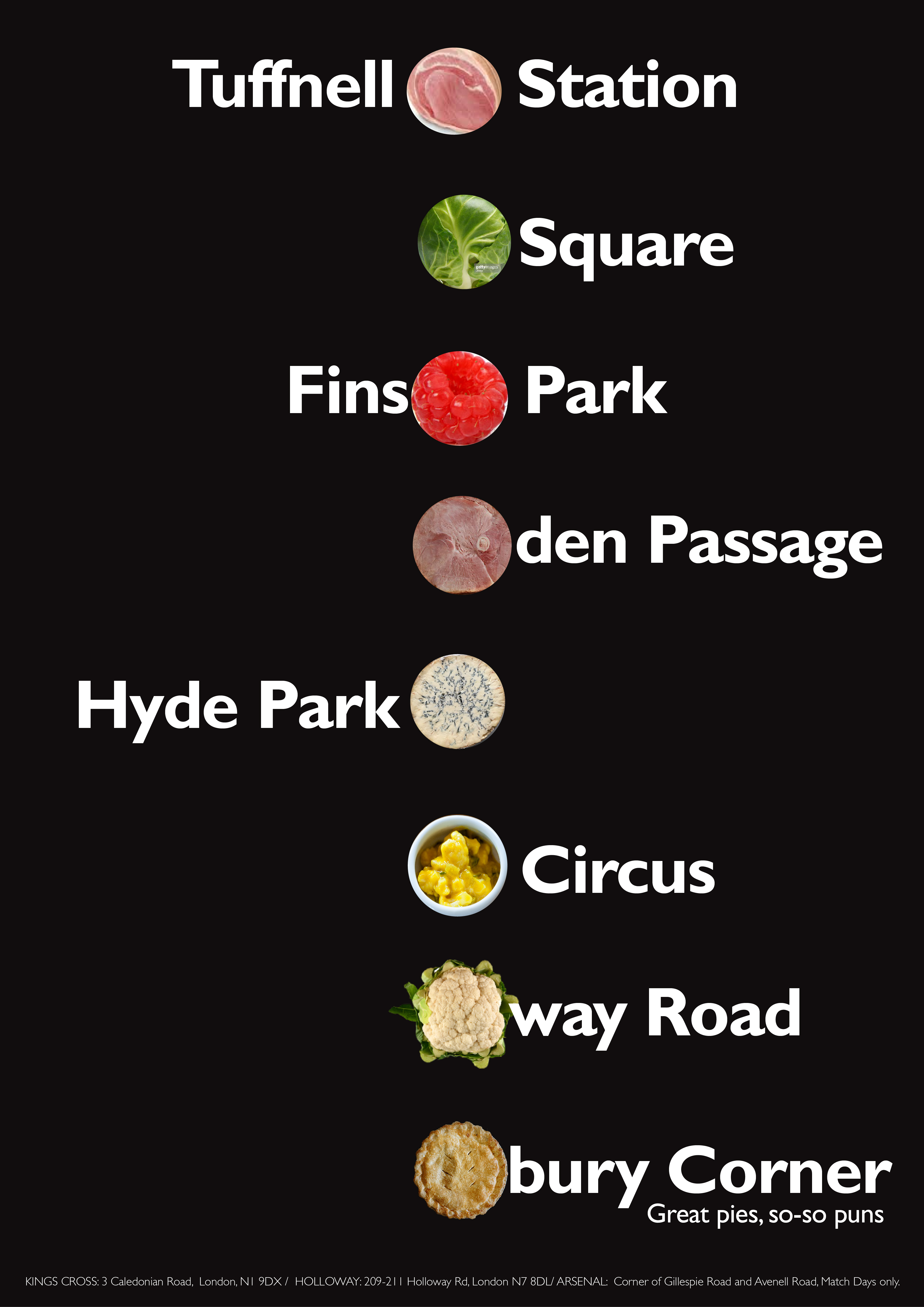 Terrible.
Is it the black?
Is it the font?
Is it the puns?
Maybe we need a more neutral font?
Maybe a simple white background? 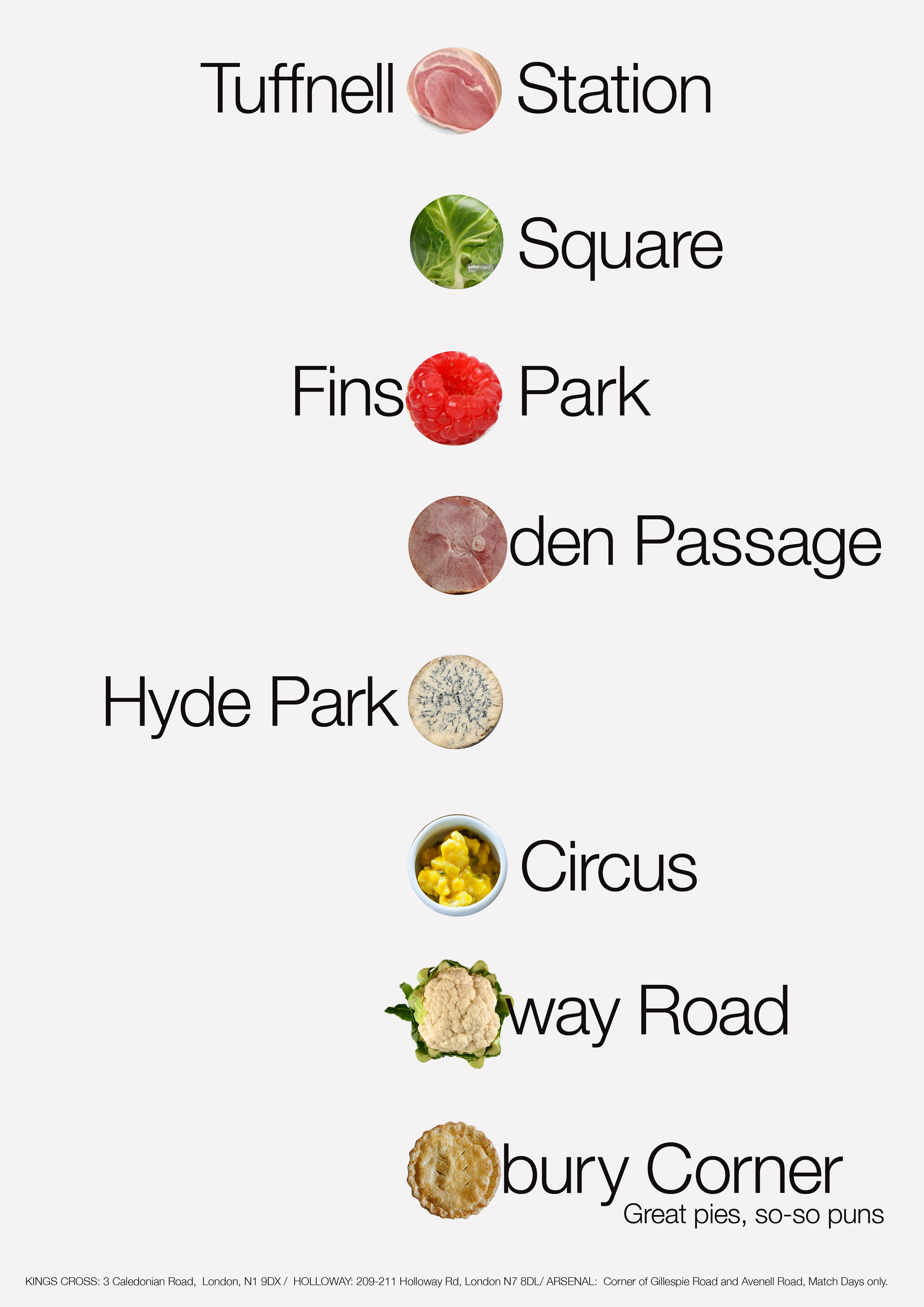 The white is better, easier to get at the elements.
But the font, Helvetica Light, makes it looks a bit too precious.
Maybe a bolder Helvetica would make it look more functional, less like it’s trying to look cool? 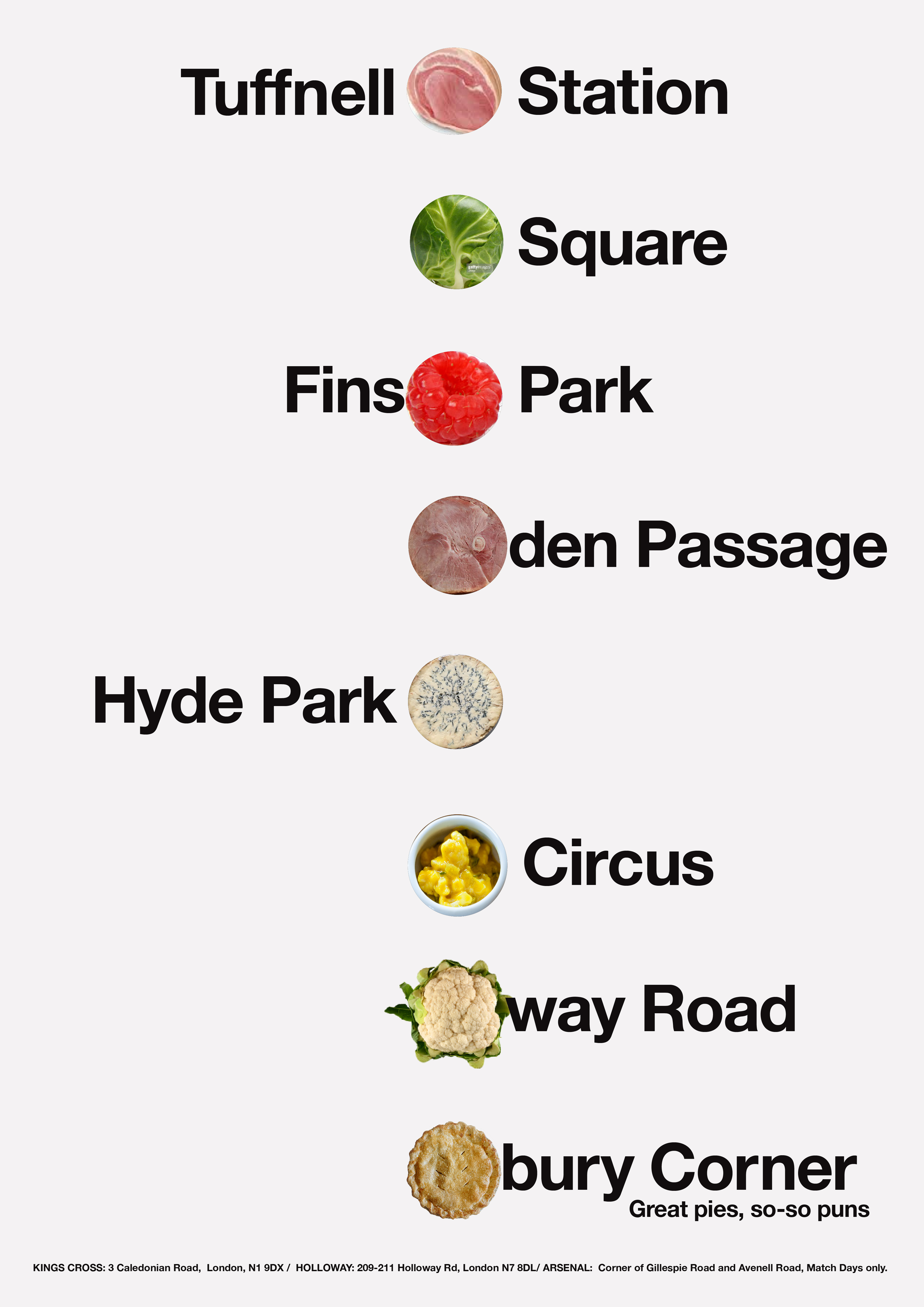 Better, but it still doesn’t look like it’s a quality item.
These pies are dear, high-end pies, perhaps it should look classier.
Dare we go serifs? 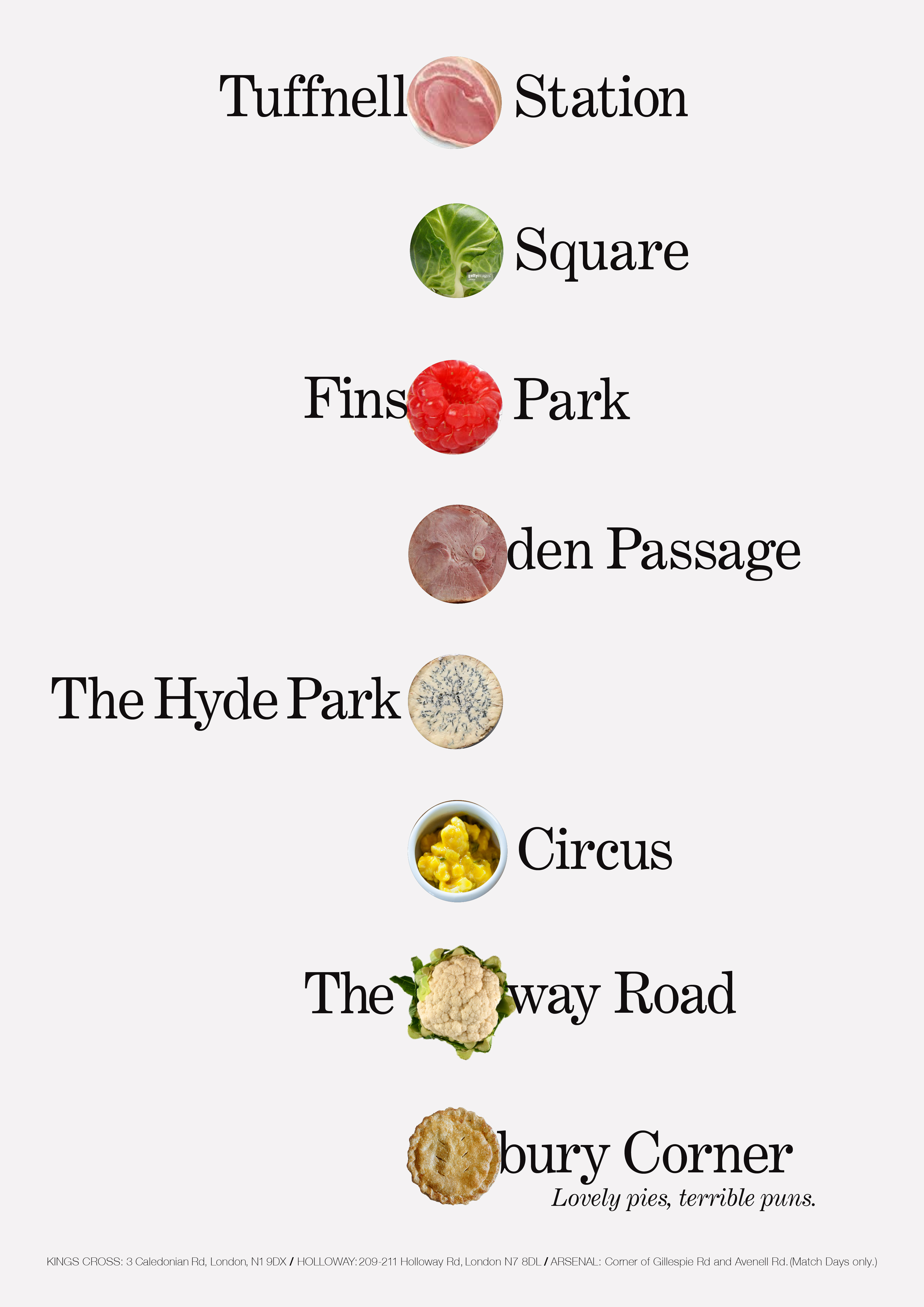 Century Schoolbook is a nice font, one of my favourites, (and Paul Arden and Massimo Vignelli’s), but maybe we need something more characterful, more distinctive?
As pies aren’t some new-fangled invention, maybe we make the posters feel traditional.
Also, we’ll be positioning ourselves against all those johnny-come-lately’s to the British diet, suishi, burritos, falafel and the like, so let’s look traditional and authentic. 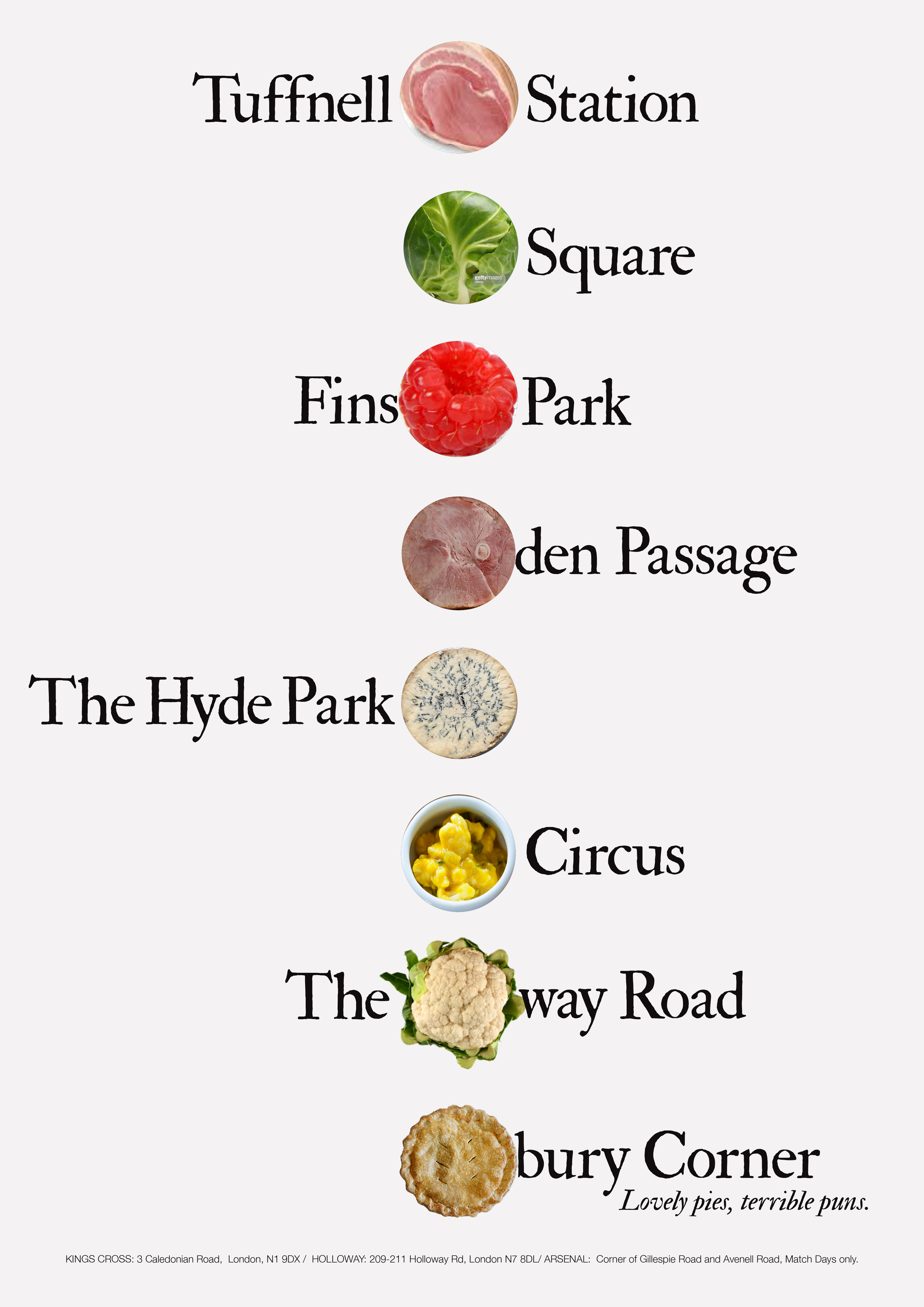 It’s ok.
But I think the little images are causing the problem, they look crap.
Sod the photographer, let’s bite the bullet and embrace puns.
Maybe an all type poster could look cool, like the kind of London posters you buy, not like an ad. 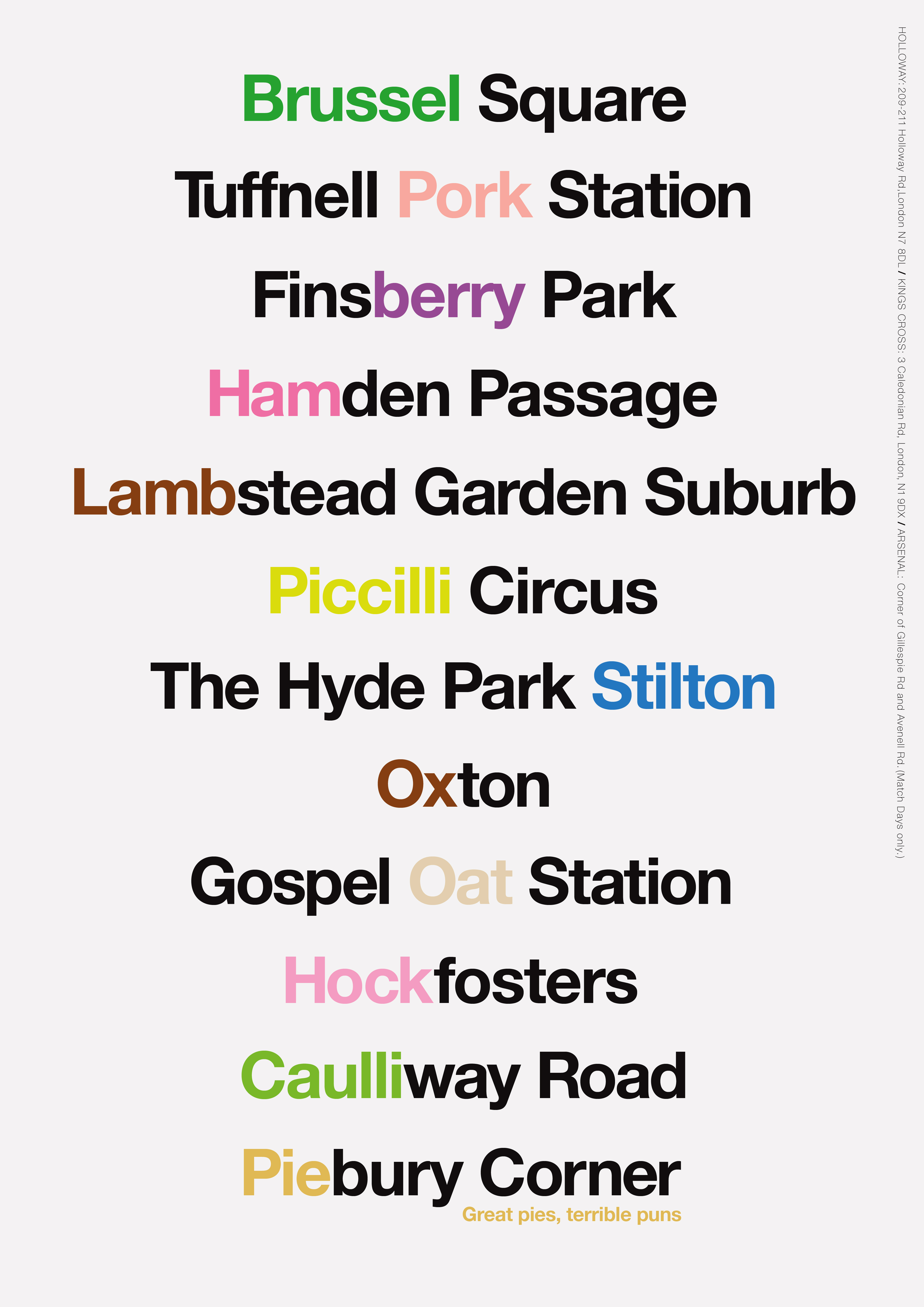 Looks way better.
The words are a bit small though, let’s make them bigger.
The longer place names are sacrificed to give us an increased the font size? 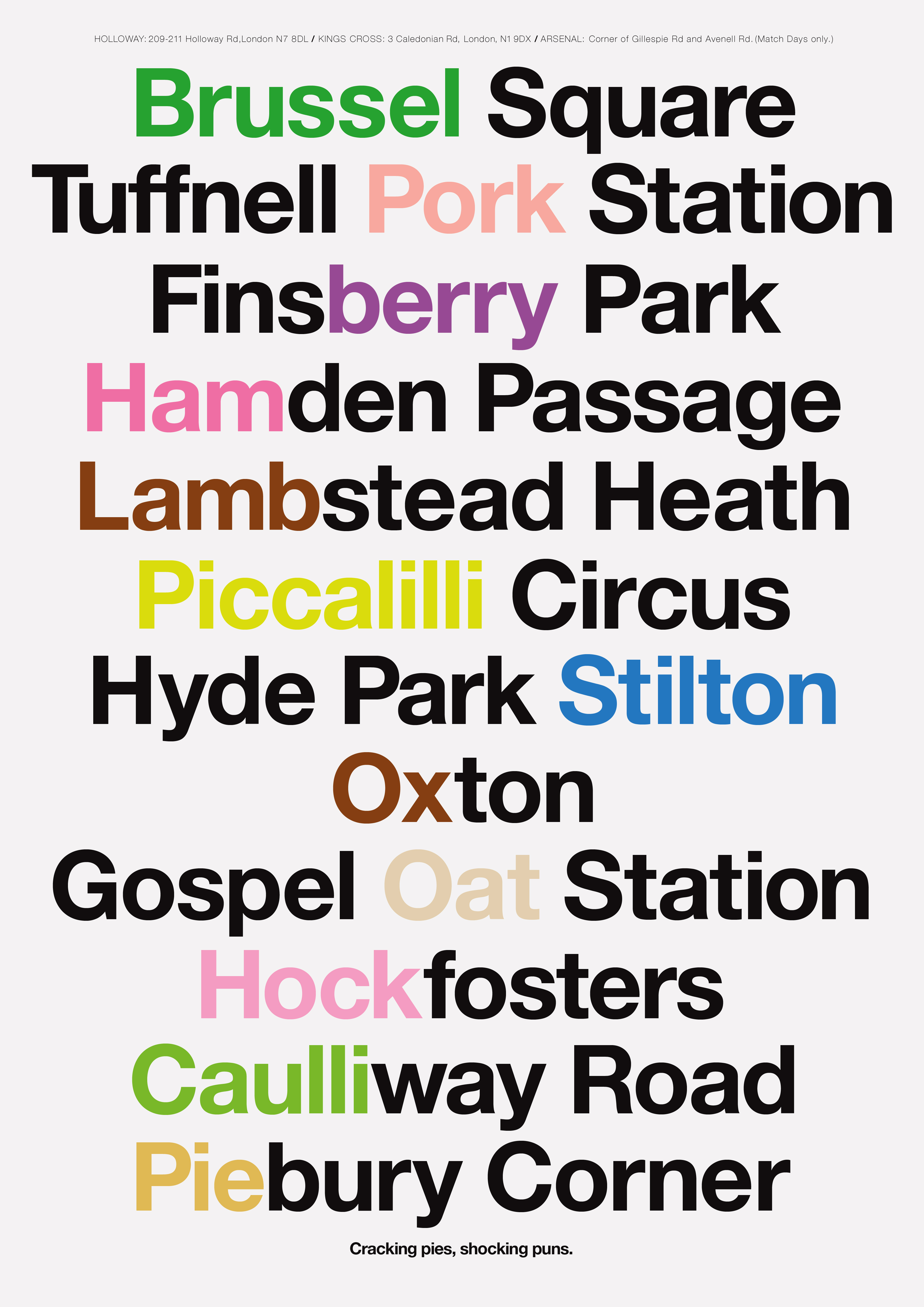 Don’t like the line at the end,
It feels like a punchline.
Which makes the whole thing feel very contrived.
I think we should trust people to get the link between Piebury Corner and the other puns.
Let’s weave it into the text at the bottom.
Also, ‘Shocking puns’? What’s our brand personality; Wallace & Gromit?
I Keep thinking of more names, it’s addictive, I now have enough for three executions. 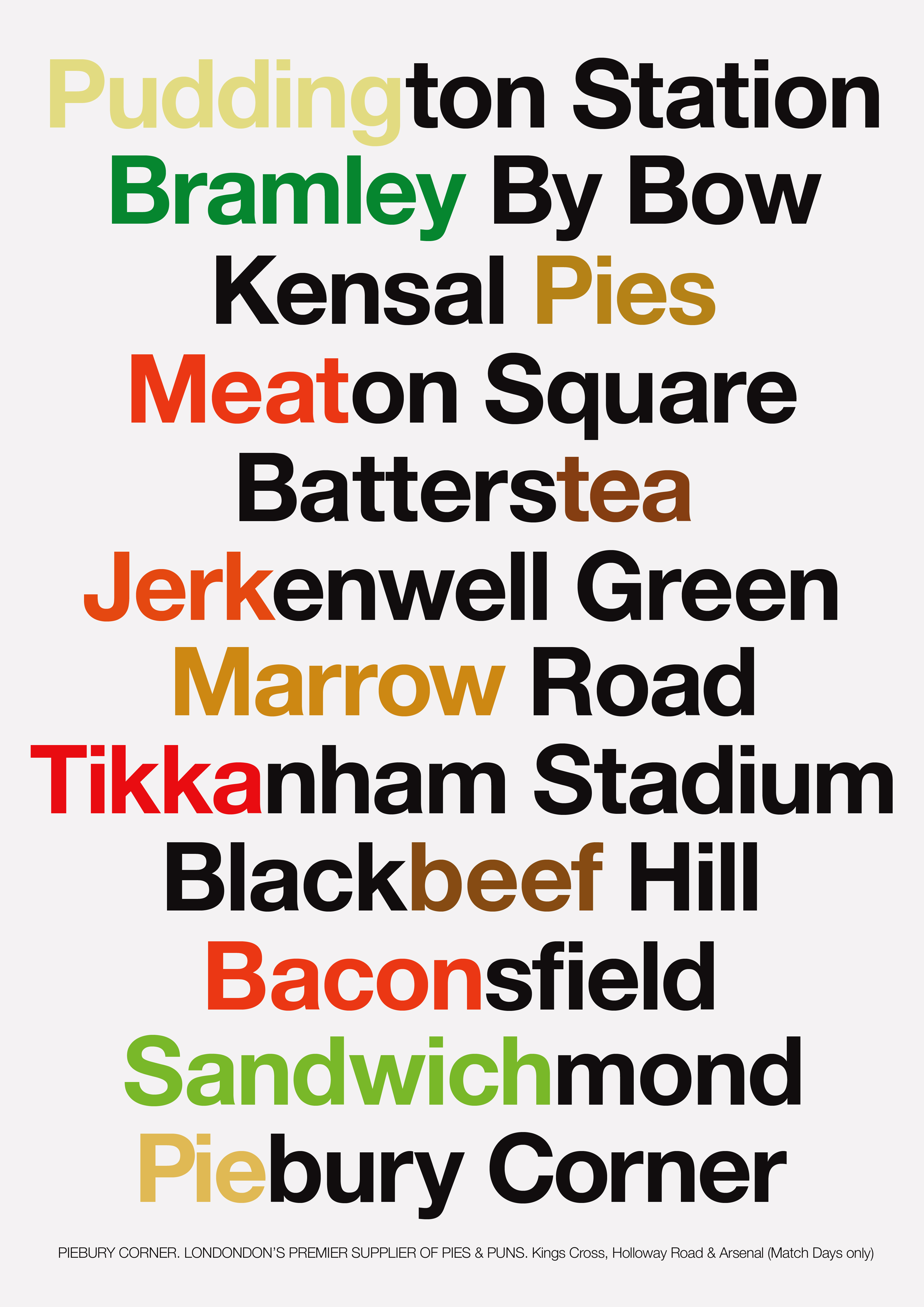 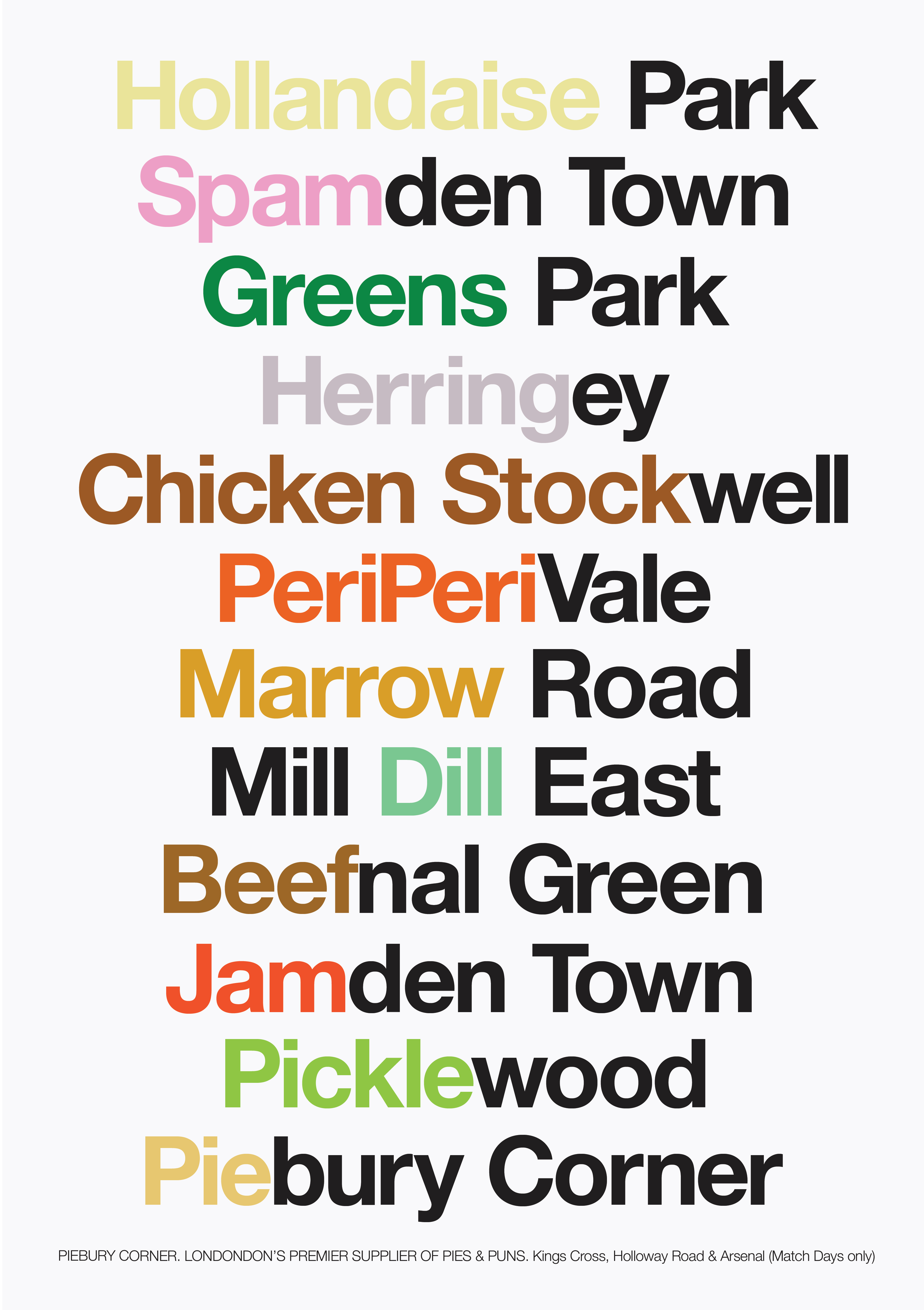 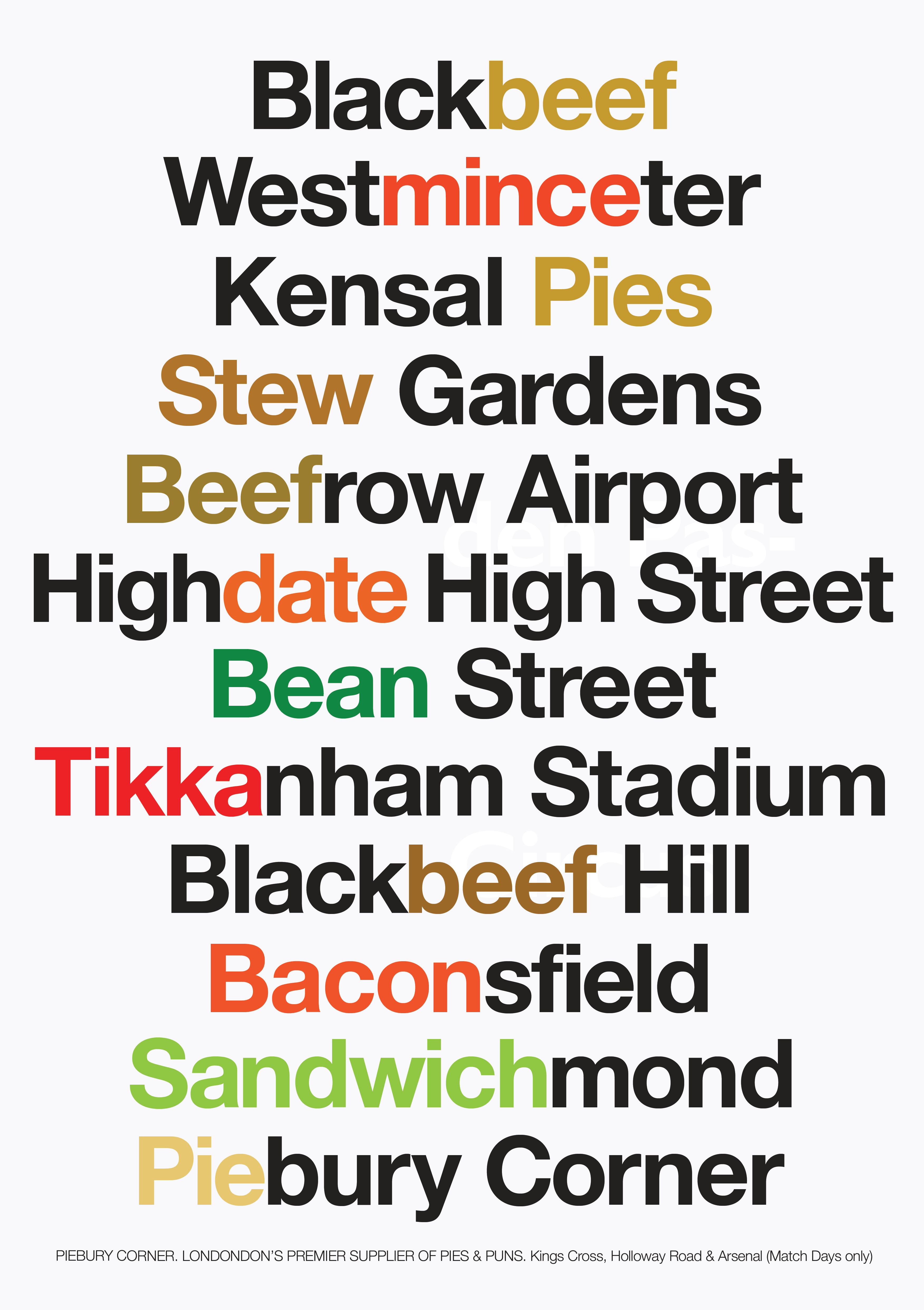 They’re starting to look good.
But are they a little too cool for school? It’s a chain of pie shops after all.
Maybe Helvetica is just too clean and clinical for pies?
Hang on…Johnston!
Surely we should use the London Underground font?
It’s a London based chain of pie shops featuring London destinations; Johnston! 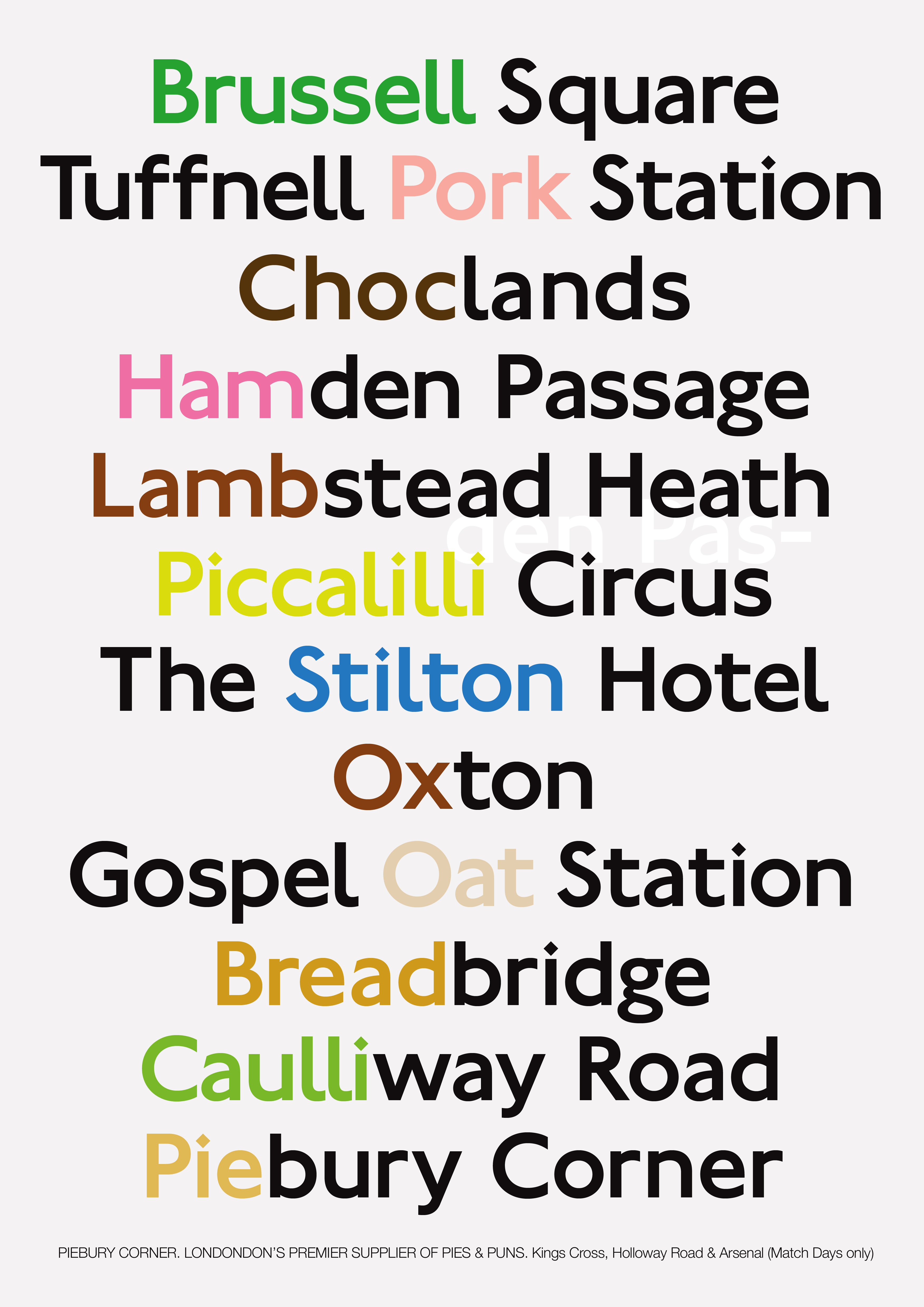 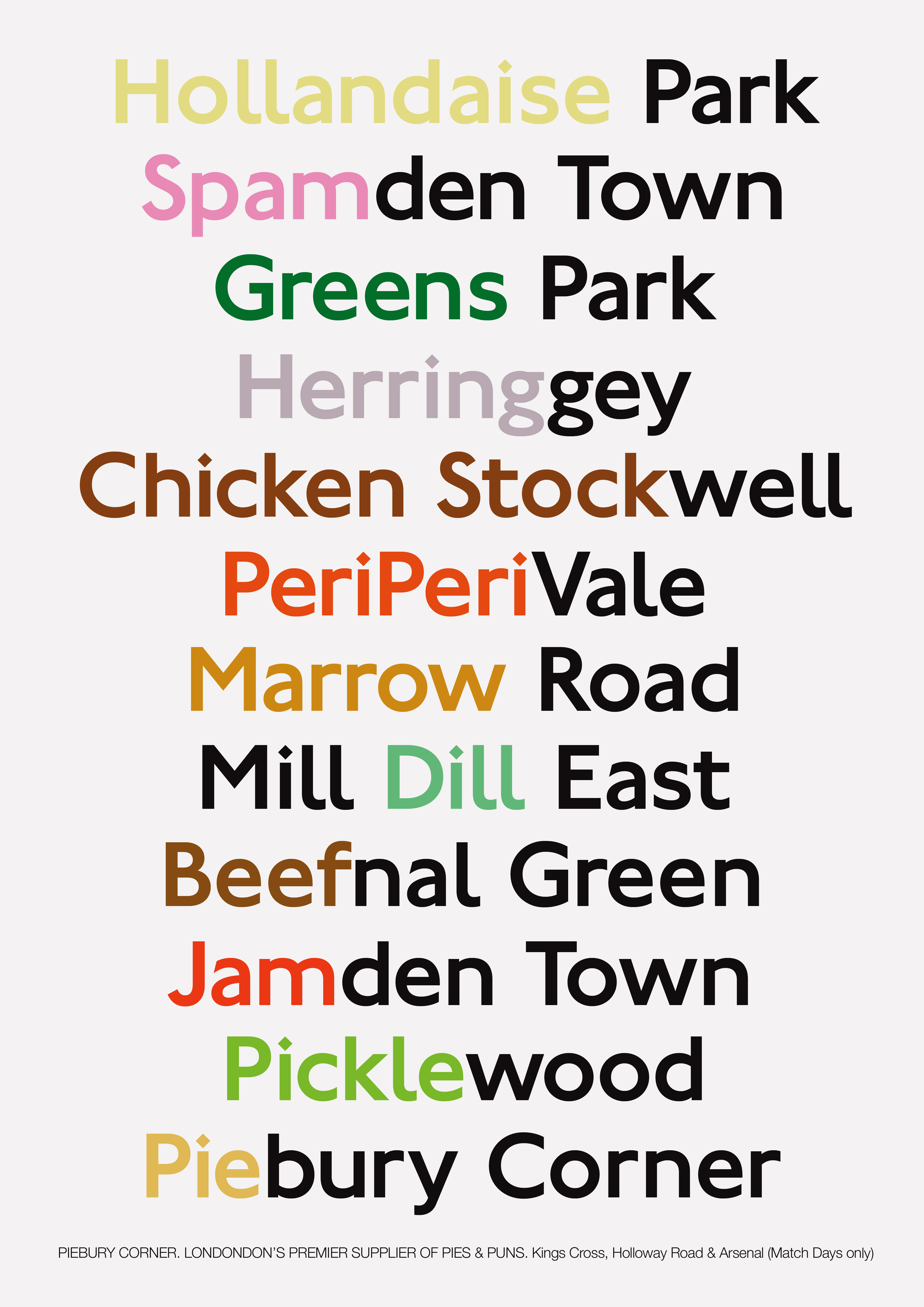 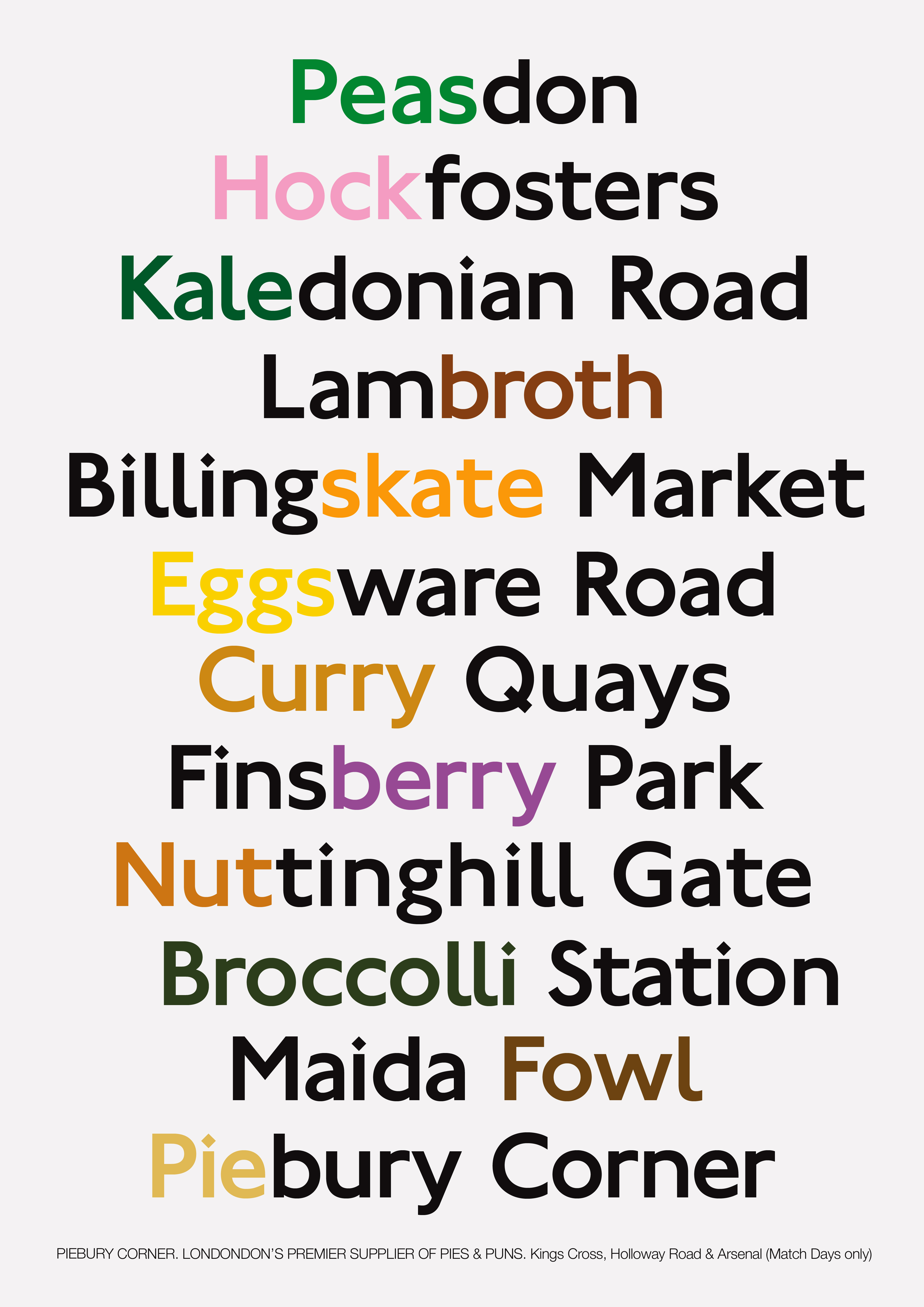 Much better.
But maybe we should use a heavier weight?
It would mean a more colourful poster, (thicker lines hold more colour). 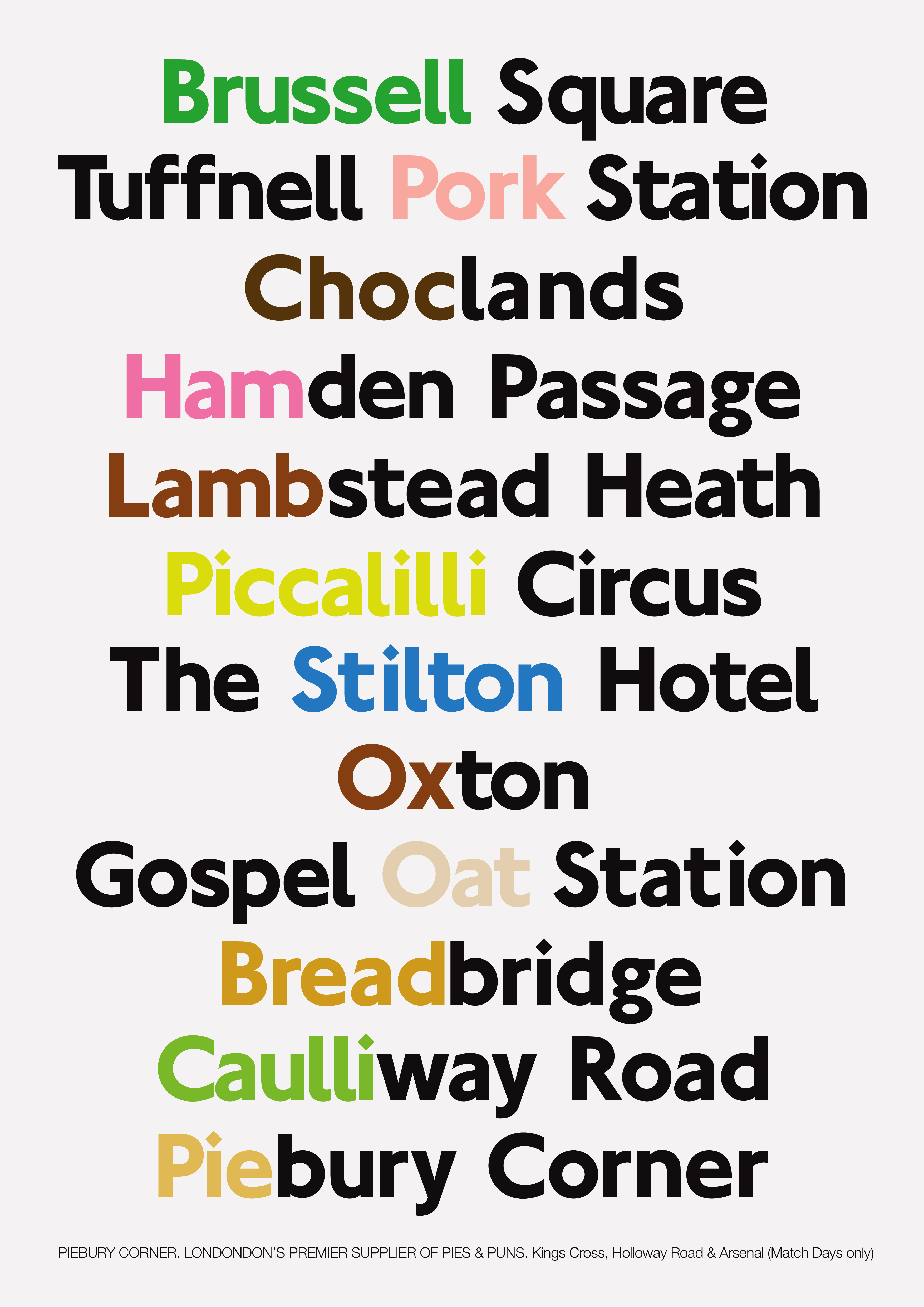 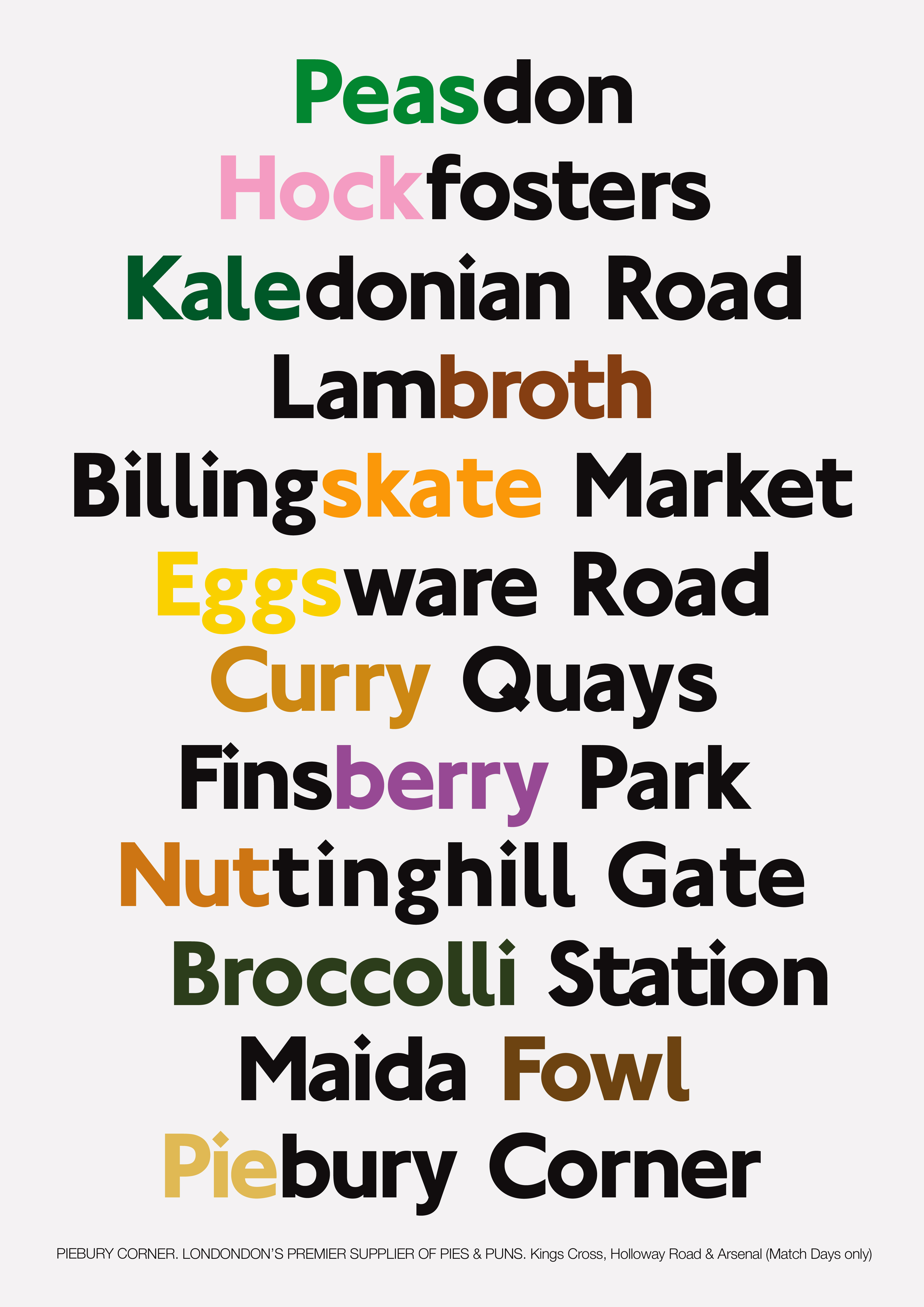 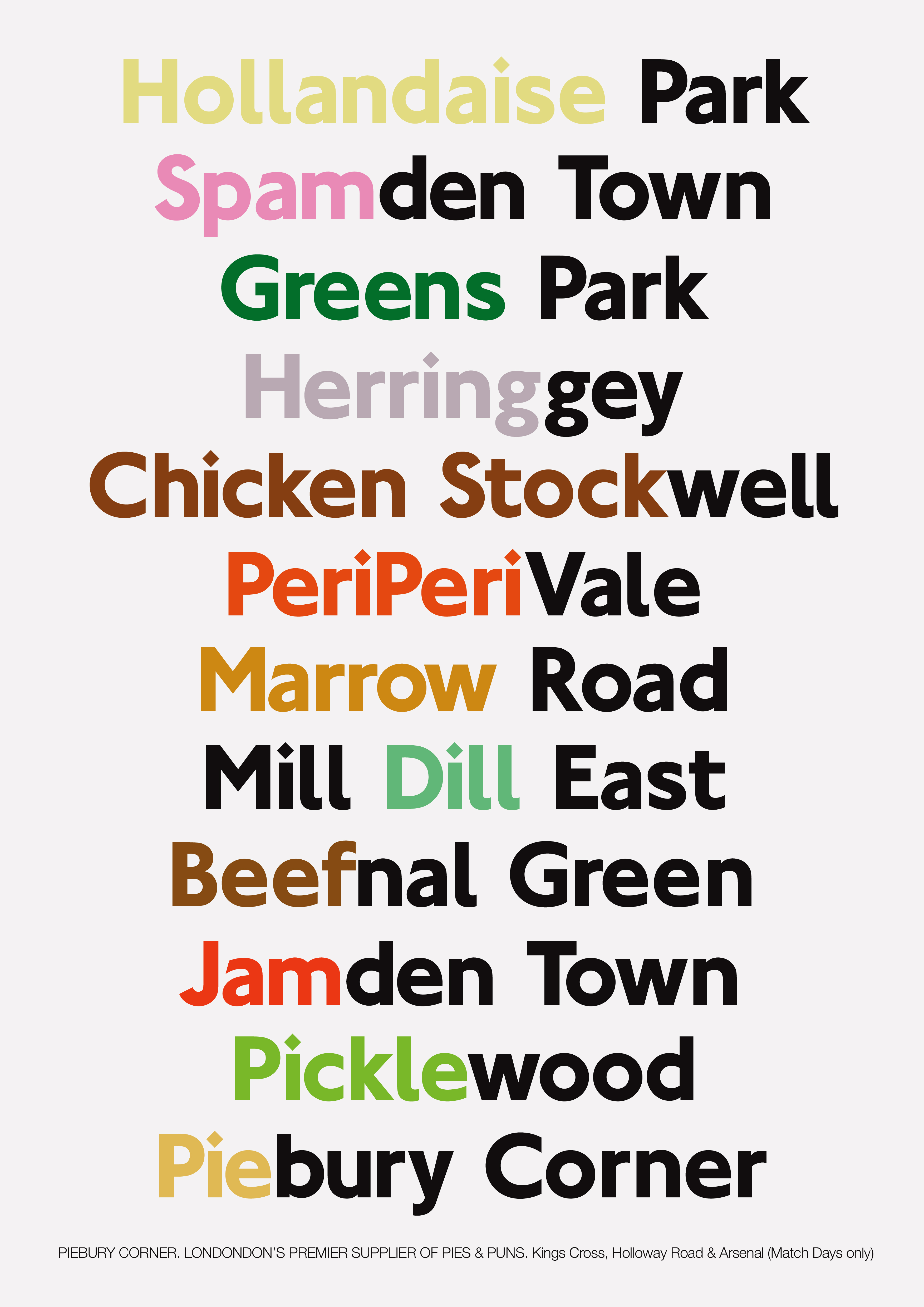 The colours are a bit of a mess, too random, not easy on the eye.
Maybe we group the colours to tidy it up a bit?
The ‘Pie’ in ‘Piebury Corner’ should be a consistent colour every time. The colour of pie. 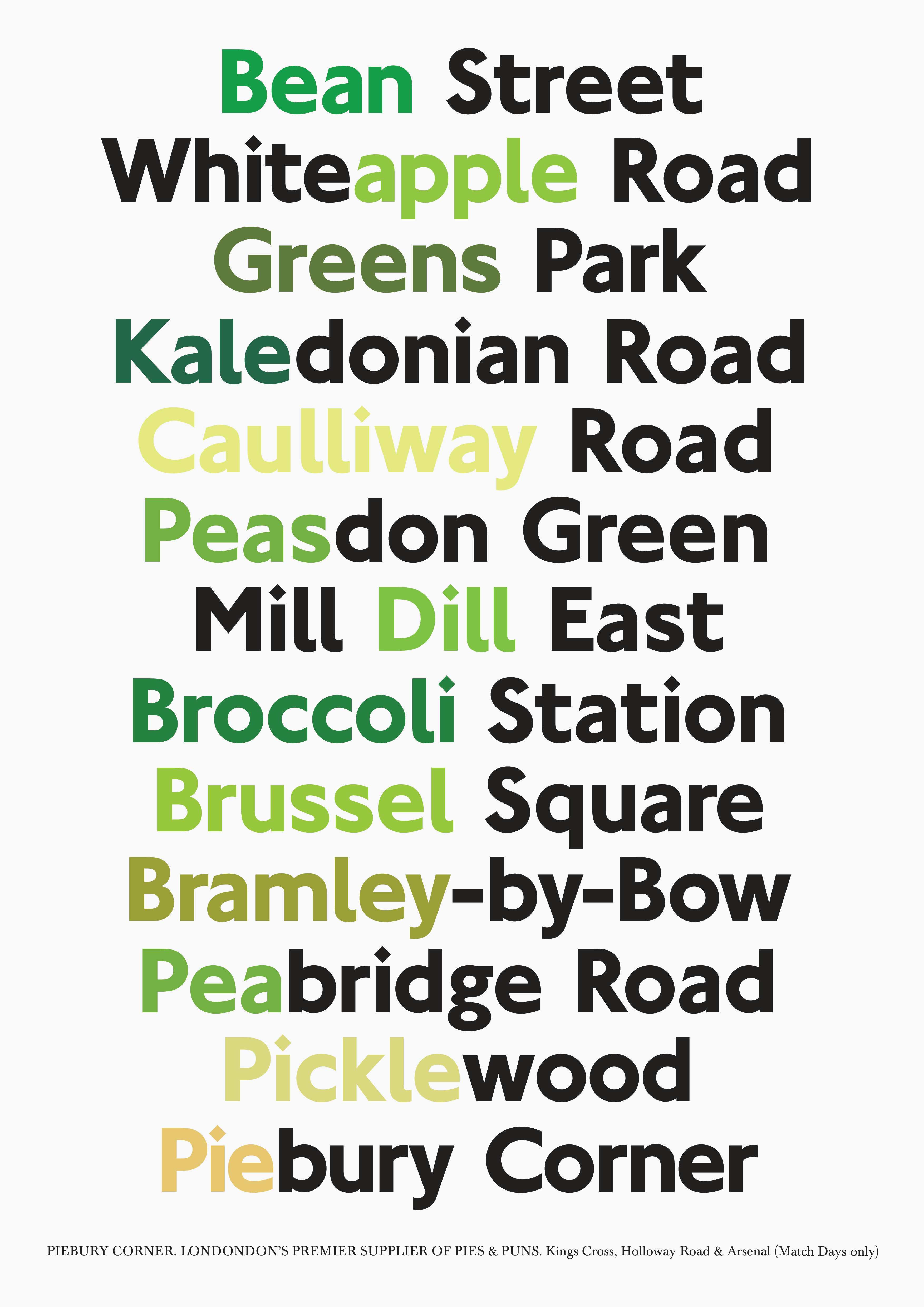 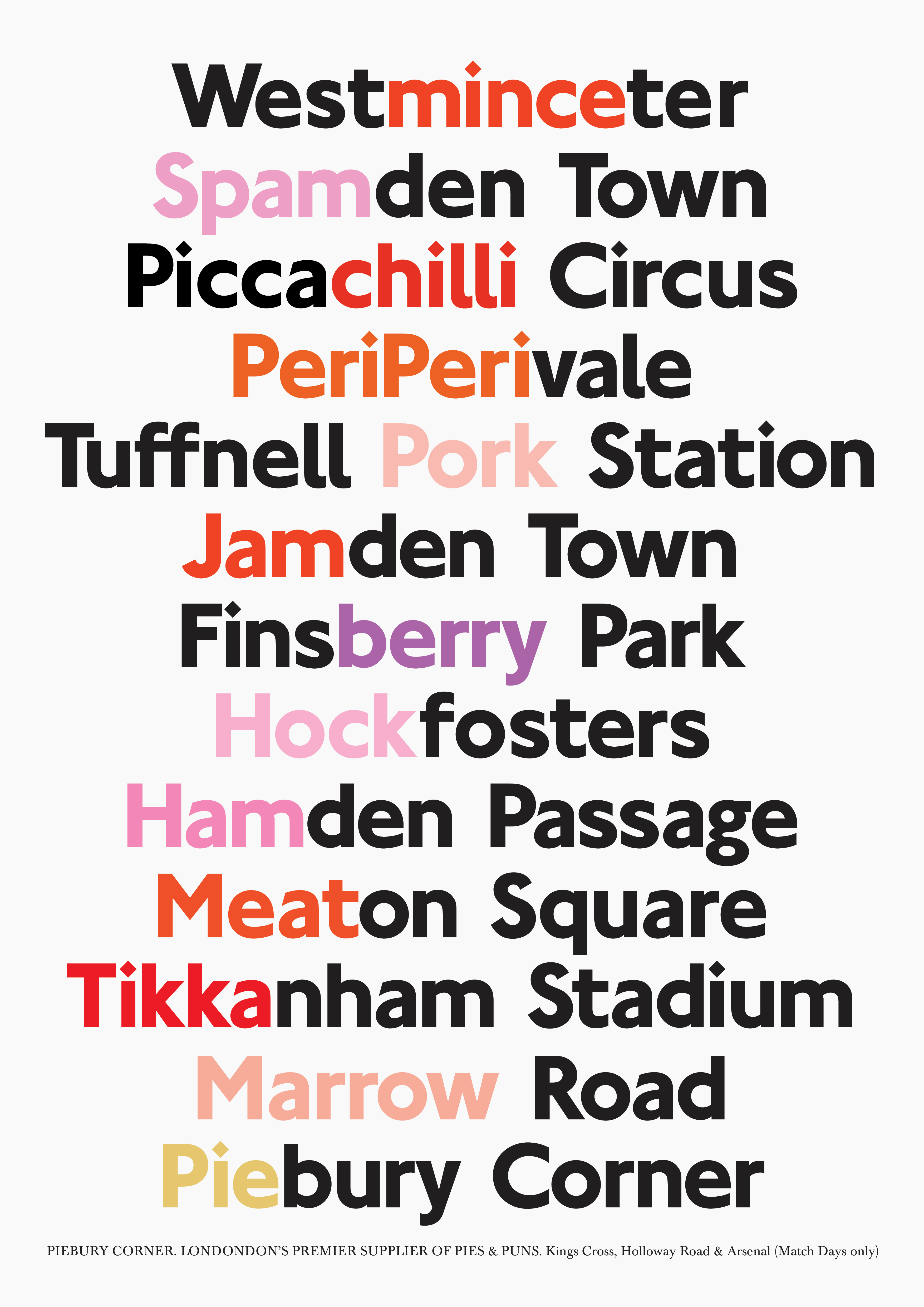 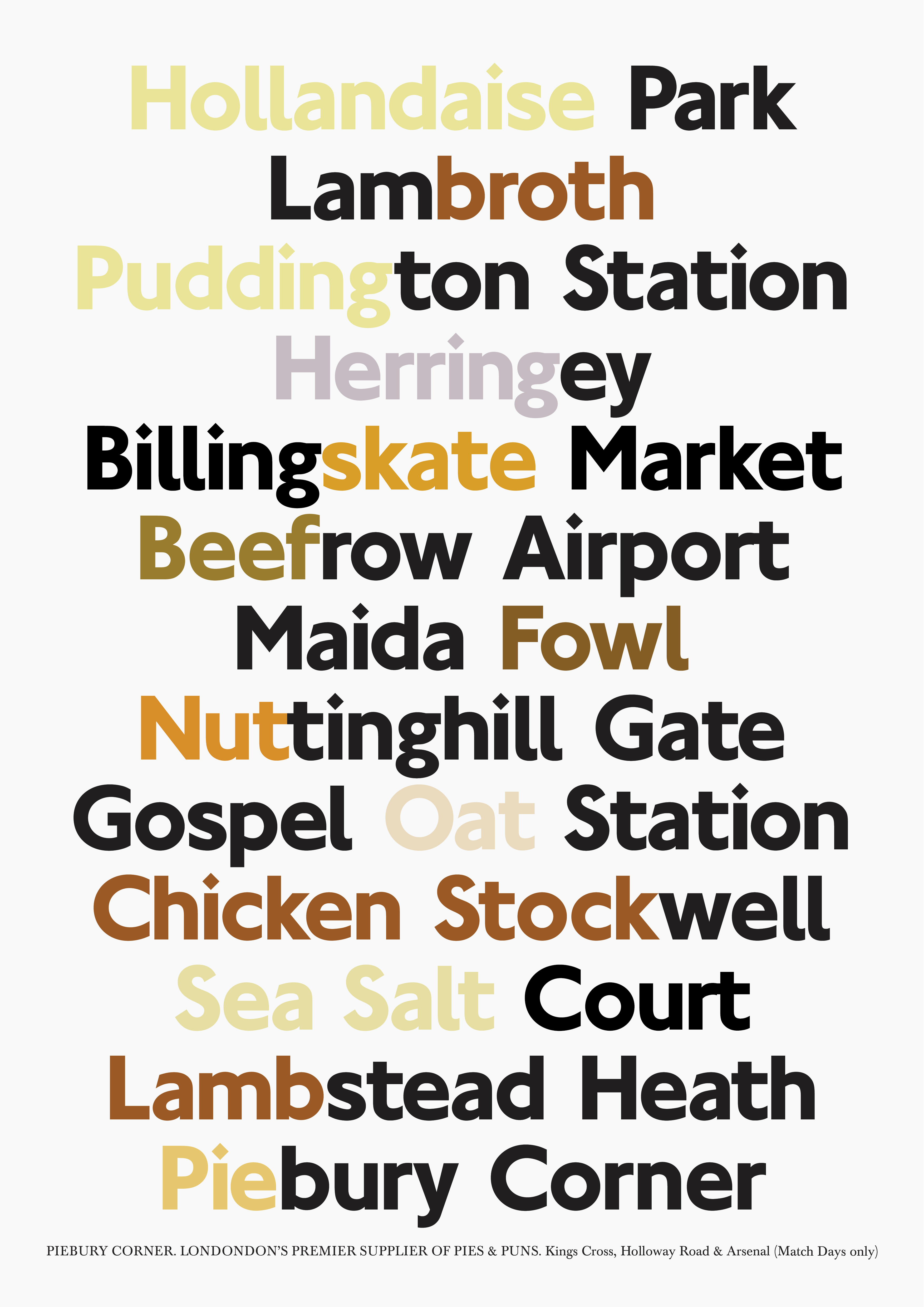 I notice that the greens were all a bit similar.
It’s because I’ve guessed them, mixed them from four colours.
Colour looks different when placed next to another colour, so when you make up a colour you are too influenced by what’s next to it, which is generally good, but not if you want it to accurately reflect a colour.
To do it objectively, I decide to find pictures of the objects mentioned, then sample the colours.
Some were very similar to my guesses, some were miles out, (check out the pickle and Bramley for example).
Also, it’s nice to know the colours are accurate. 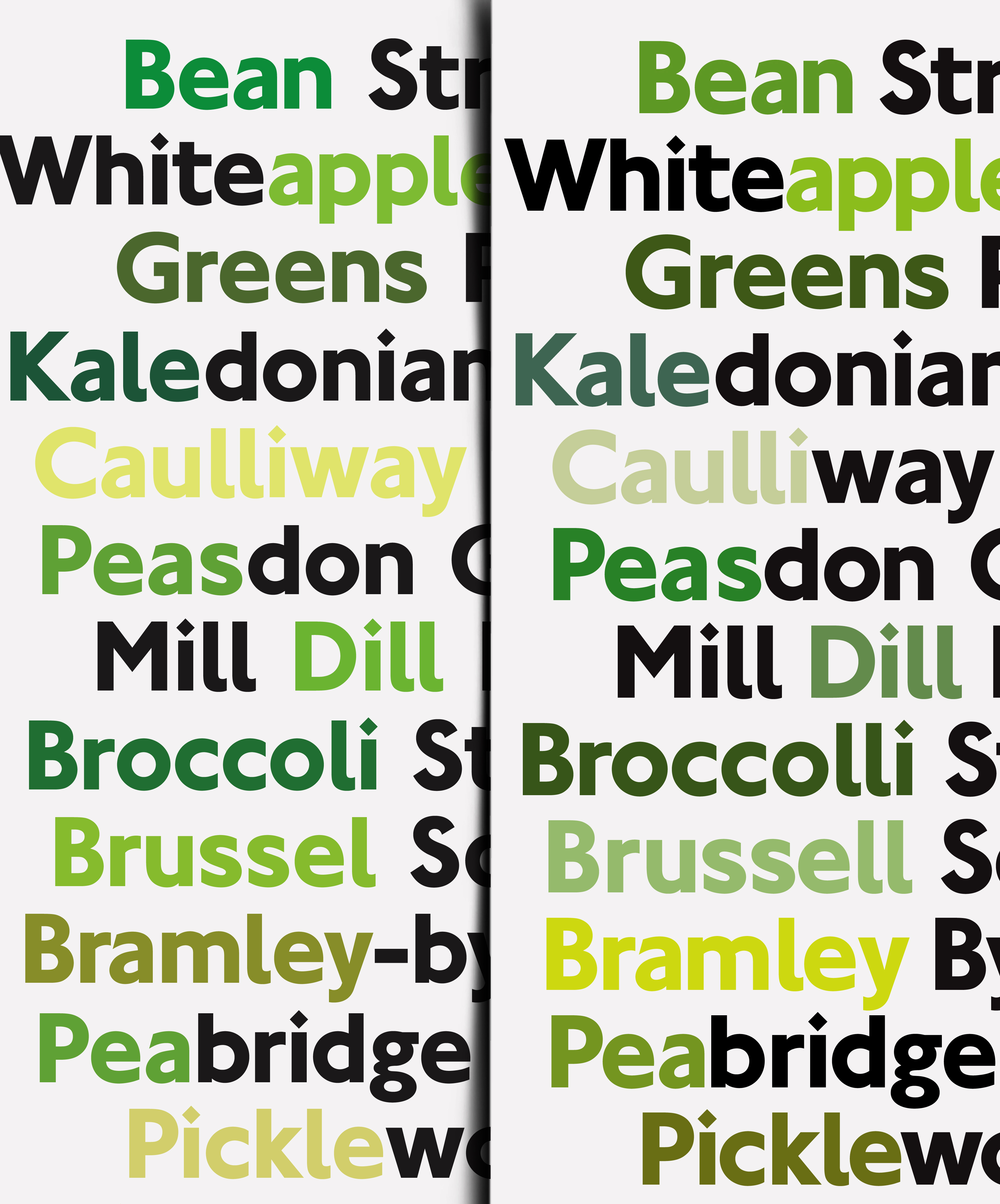 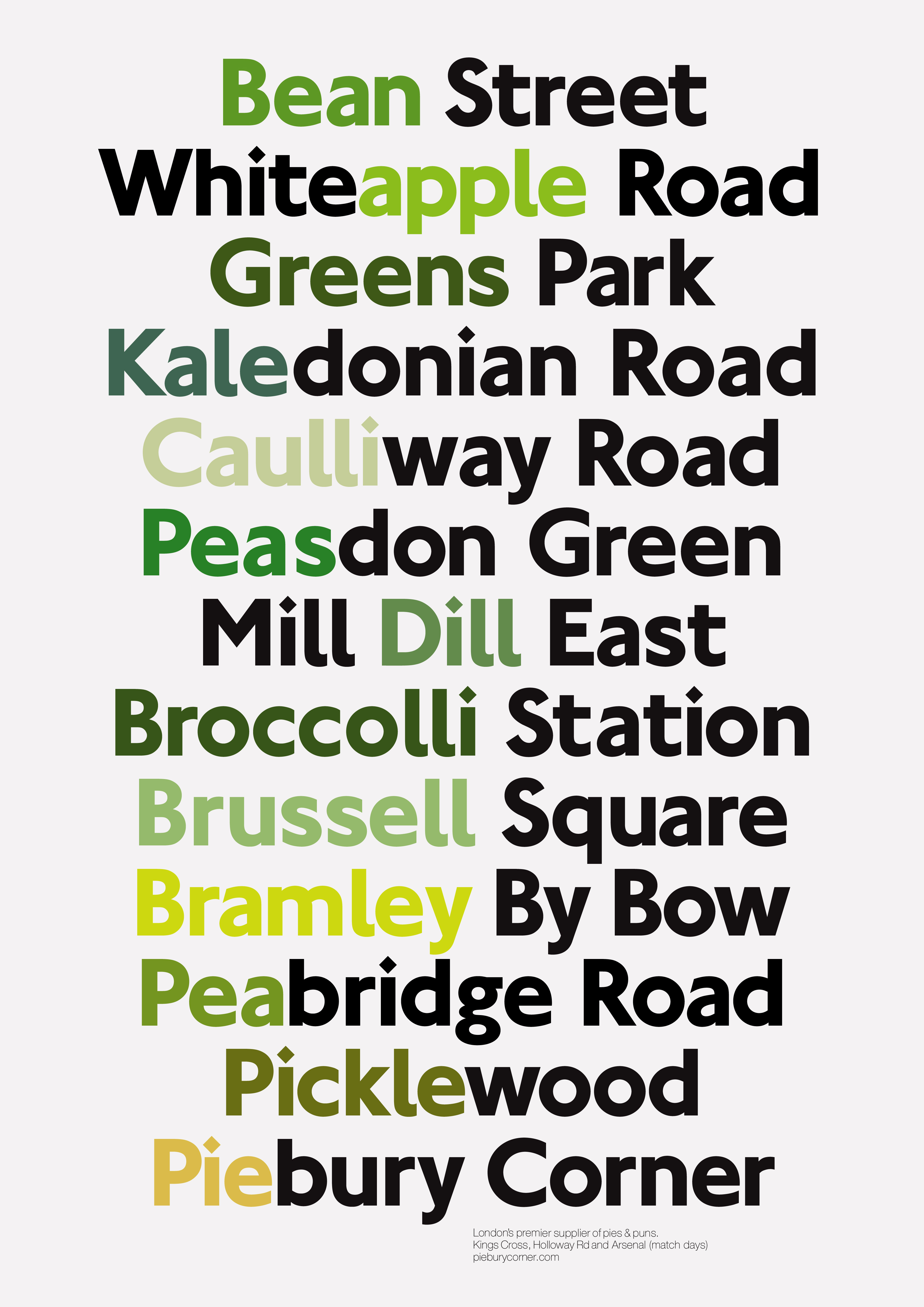 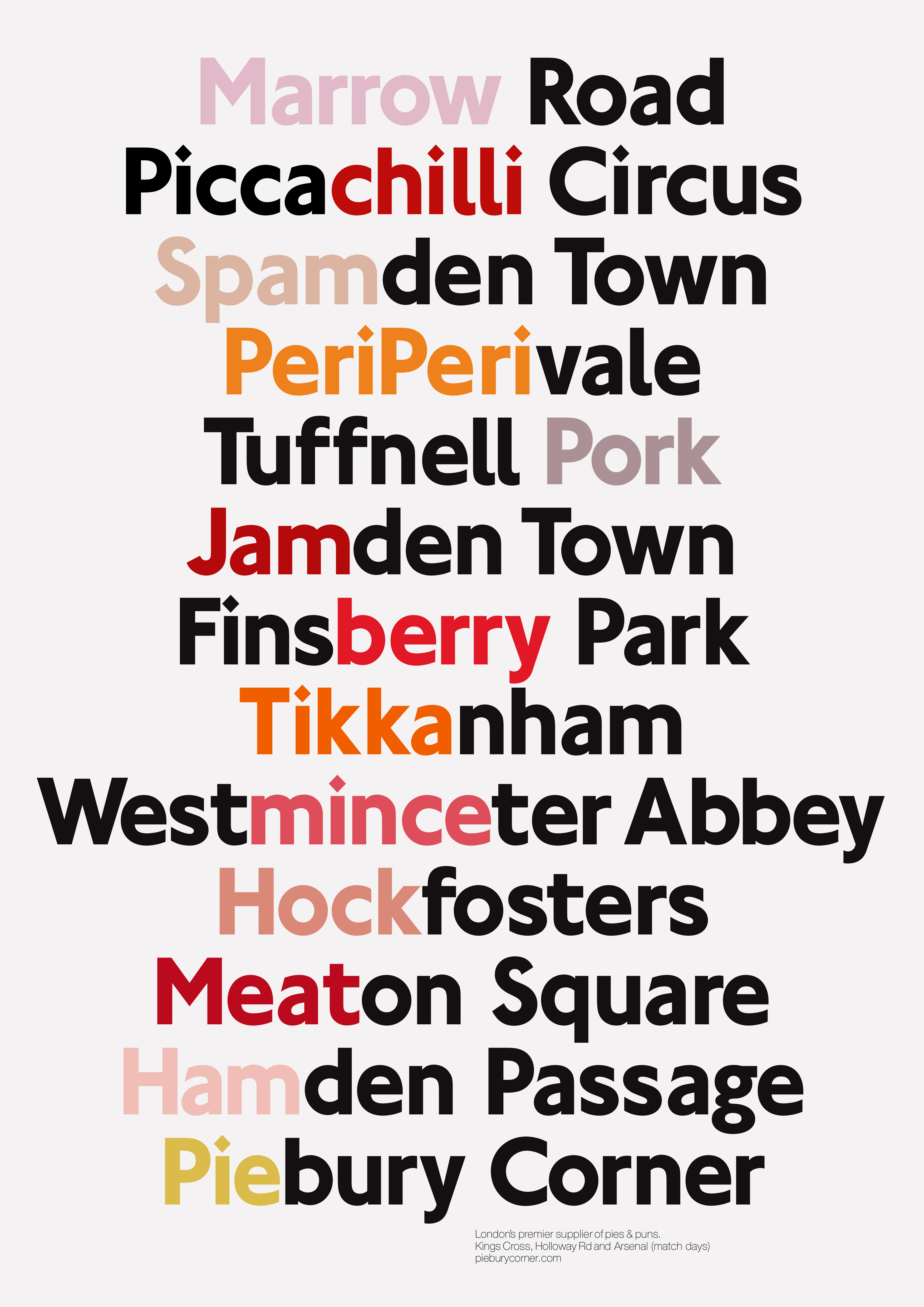 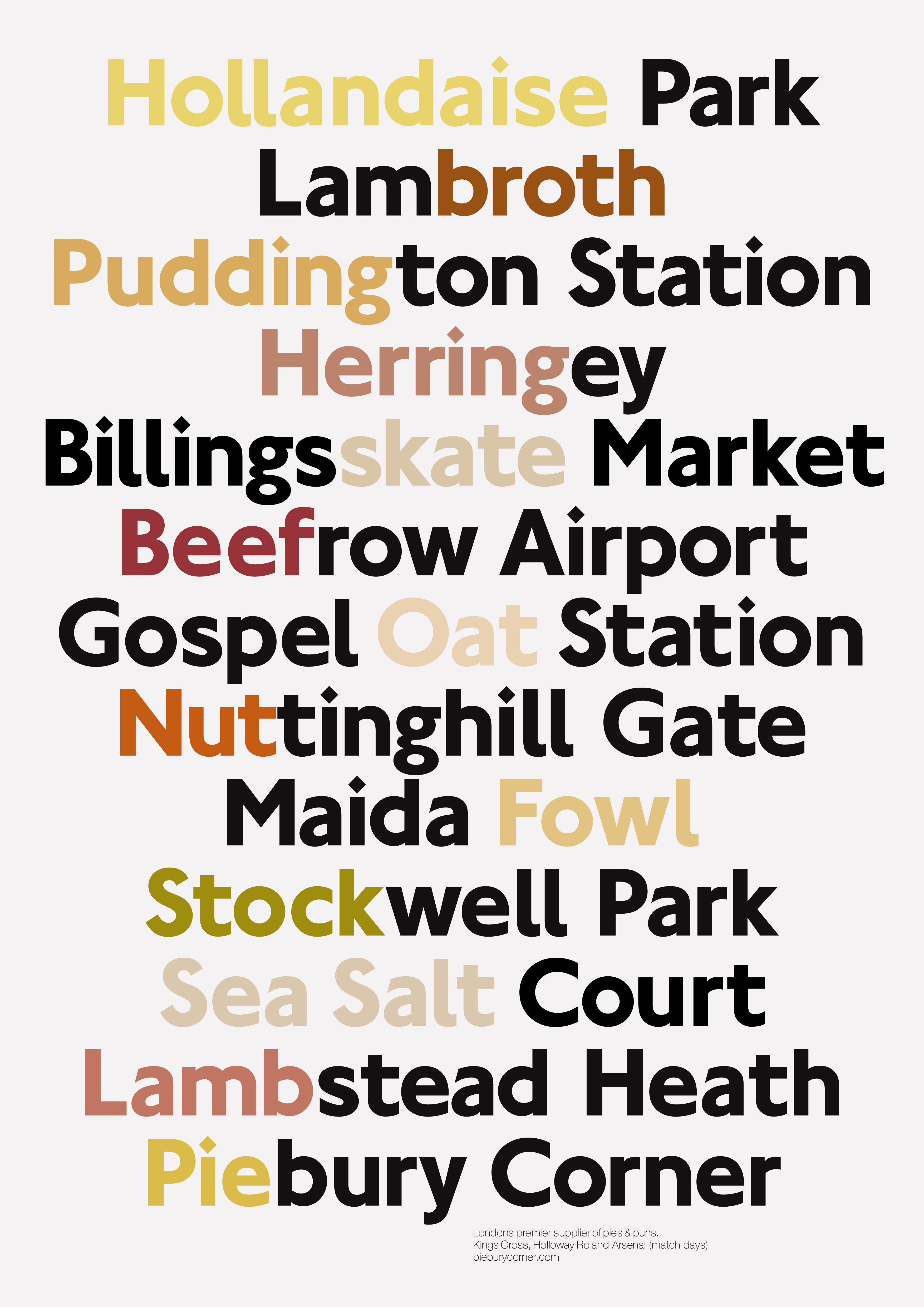 I can’t think of anything else to change, they must be finished.

6 responses to PUSHING WORDS AROUND. Pt 2.