A few months after setting up Campbell Doyle Dye a publisher came in for a chemistry meeting.
Before we’d set up I’d been at AMV/BBDO, The Economist was one of the clients I looked after, so I was excited to share the work Sean and I had produced as it was not only relevant, it was arguably the best campaign for a publisher ever?
“Did you do those here?”
“Er…well, no, that was at our last agency, Abbott Mead Vickers”.
“Oh?”
“We’ve only just started, but we wrote, art directed and creative directed them all, so…y’know.”
“I see, could I see some work you’ve created here?”
“What…in this building?”
We didn’t make the pitch list.
This question would be asked again and again throughout our first year.

I was conscious of this when I started DHM.
I tried to generate work created in 32 Southampton Street as quick as possible.
Consequently, anyone walking past our front door were offered free creative work.
I’ve always been an easy touch for empty-pocketed types needing something creative.
I can’t help it, people generally seem nice, (as they do when they need something for nothing), and I’m optimistic, so the minute people start talking about their problem, I start thinking, I begin scribbling and before you know it I’m phoning others to let them in this glorious opportunity to work for absolutely nothing at all.
So it wasn’t a problem when, just after opening our doors, we got a call from a client saying ‘We don’t have much money, but we’d love to talk to you about our product?’.
My new partners and I schlepped up to Birmingham to get briefed.
We arrived to find an enormous building, ch-ching! Maybe we have different ideas on what constitutes ‘not much money’?
Once inside, the receptionist seemed to have trouble finding the names we’d been given.
Eventually, we were introduced to two people sitting at a work bench in the warehouse.
Maybe they’d come down from the management floor to deal with a stock issue?
Nope, we were looking at the whole company; Andrew, Hayley and the wooden work bench.
Flip! We’d spent £500 train tickets and burned three full partners days to talk to a company that was smaller than ours.
Although you couldn’t doubt their honesty, they didn’t have much money.
We tried to hide our feelings as we were taken through the ins and outs of the world of dried fruit.
I made notes. 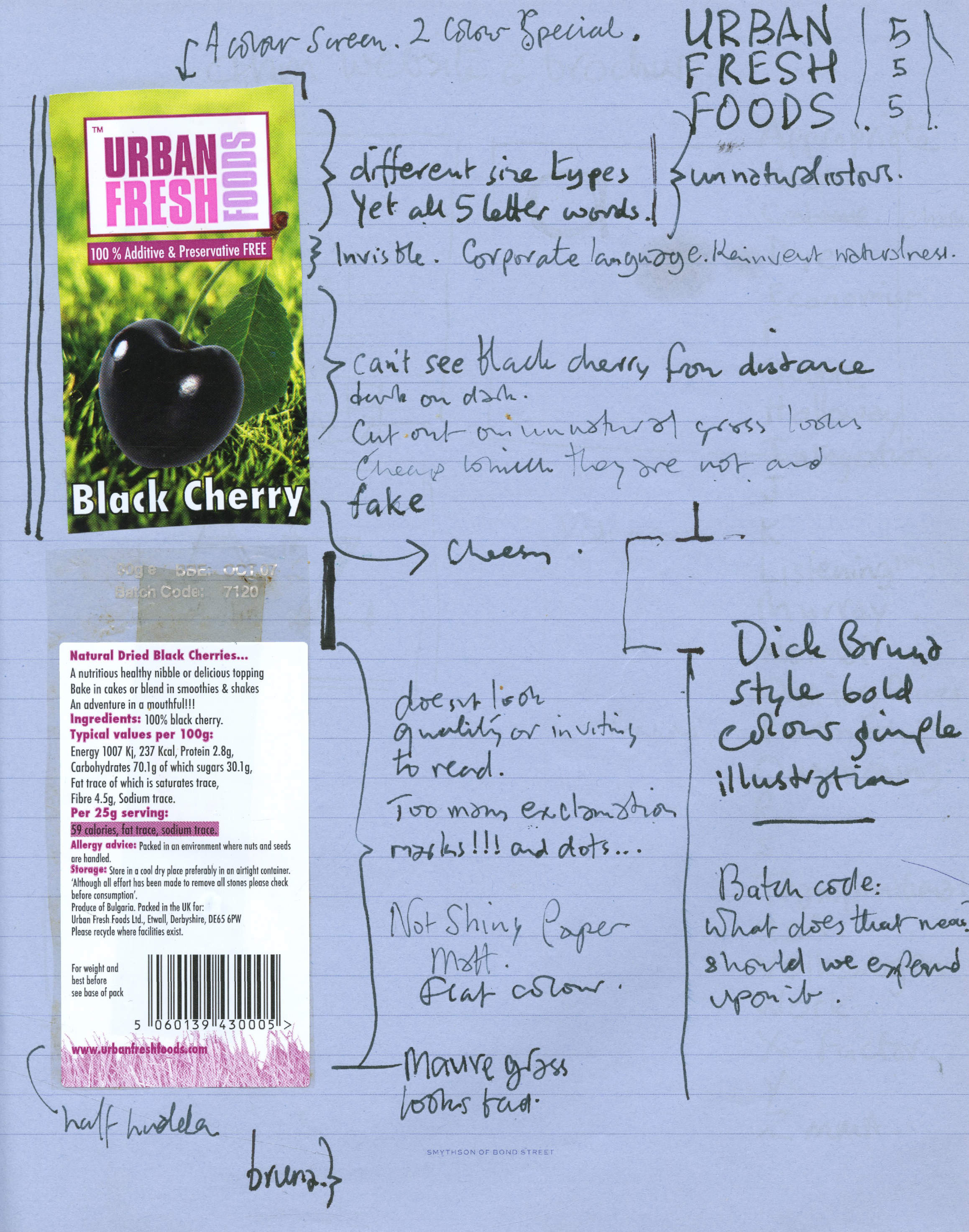 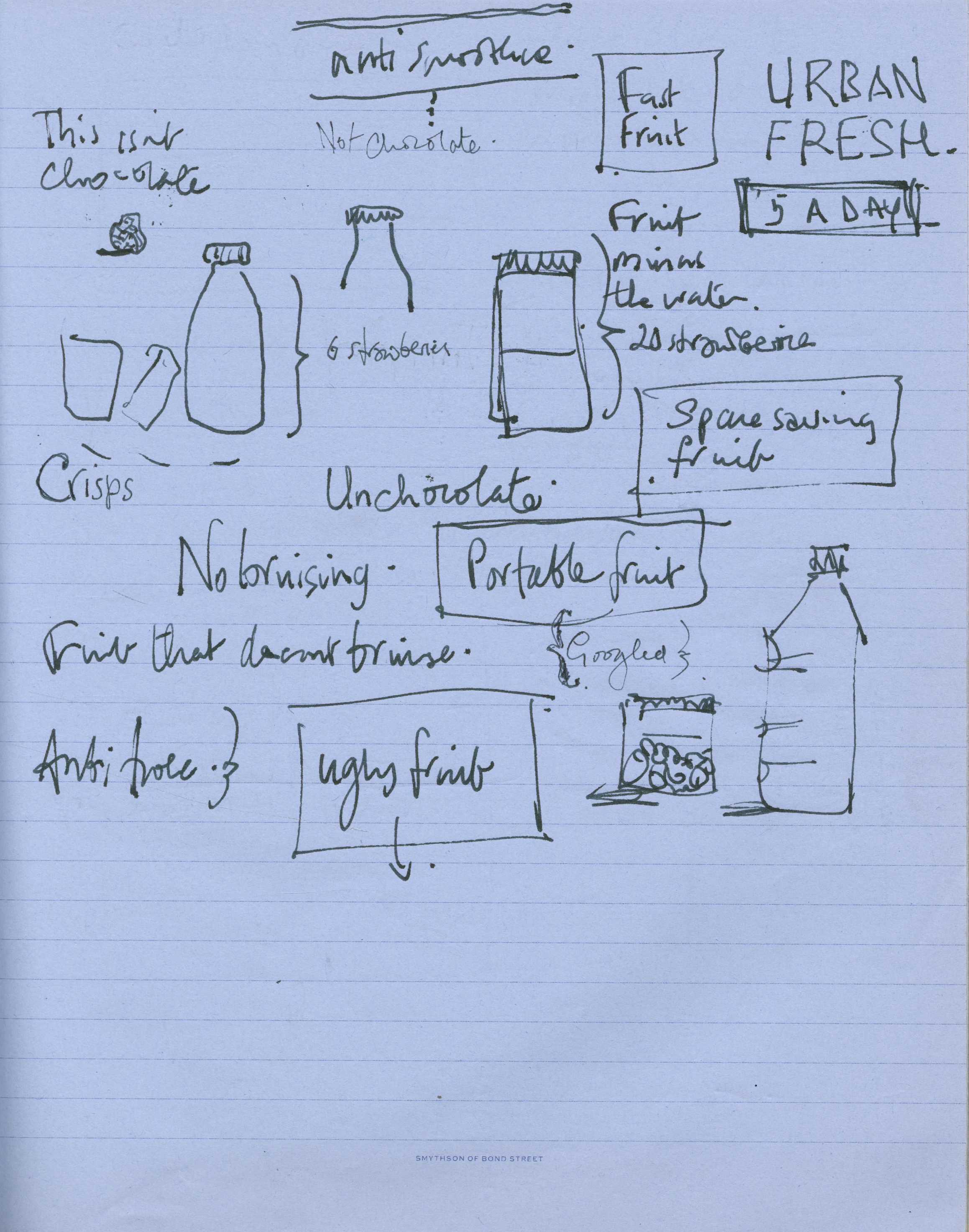 By the end of it we were won over, they were both thoroughly decent and incredibly charming.
Hayley in particular, she seemed obsessed with fruit, where it’s from, when it’s best, she talked about ‘chasing the sun throughout the year’ to get the best, ripest fruit.
How could we not help this lovely husband wife team?
Besides, we had some capacity, (as people call it when they’re not busy).
‘Do you have any money…for our time?’
‘No.’
Jeez! Technically, that’s even less than ‘not much’.
‘We could send you some fruit? Maybe if you just tell us what you think of our pack and name…and anything you think would help?’
Sod it! We agreed and gave an address to send the fruit to. 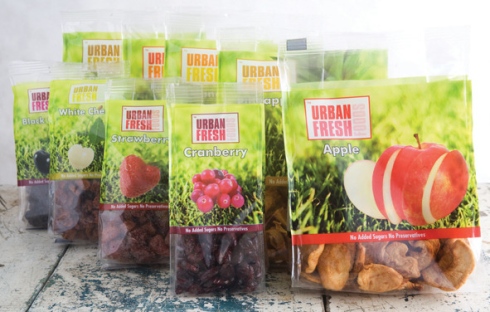 THE NAME: Terrible. The fruit wasn’t ‘urban’ or ‘fresh’. Only one of the three words was true.
THE PACKS: Terrible. Bland, cheap-looking and they carried the lie ‘Urban Fresh Fruit’.
A shame, because it was a very high quality product, it just didn’t come across.
Hayley laughed and politely thanked us for our insults.
She said we wouldn’t be able to address those issues until the next packaging print run, about three months.
A few days later, a bundle of dried pineapple turned up, it was the size of a small child.
In our next meeting Hayley told us the one thing that was really driving her nuts; supermarket’s wouldn’t put her products in the snacks aisle, they insisted on putting them with the baking ingredients, (ironically, next to the nuts).
She felt it was a healthy snack, so wanted it to be in the confectionary aisle, near the competition; chocolate, crisps and the like.
Everyone looked blank as we all tried to think how the hell we could change that?
Maybe we print something on the trays in-store?
It’s the only ‘media’ we had.
I wrote a bunch of messages pointing out that either these trays contained snacks or were in the wrong aisle.
Things like ‘Not chocolate’,’Snack not ingredient’, ‘Delicious at 9.07pm’ or simply ‘In wrong aisle’, these were in printed in the brightest neon inks across the fronts.
(I guess they’d call this disruption at TBWA.)

Within a couple of months they were moved to the snacks aisle.
I can’t remember how much of this was down to the trays and how much was down to Hayley’s ongoing campaign, but they certainly helped.
Next, Hayley had an idea; ‘Could you write a manifesto, to give us a bit of a personality?’
‘Sure, do you have any money yet…for our time?’
‘No. We could send you some more pineapple?’
Er…ok.
So, what are Urban Fresh Fruit about?
I couldn’t really get past the fact that Hayley was so into fruit, she seemed so obsessed, charmingly so.
I remembered a thought I’d had whilst pitching for Innocent. 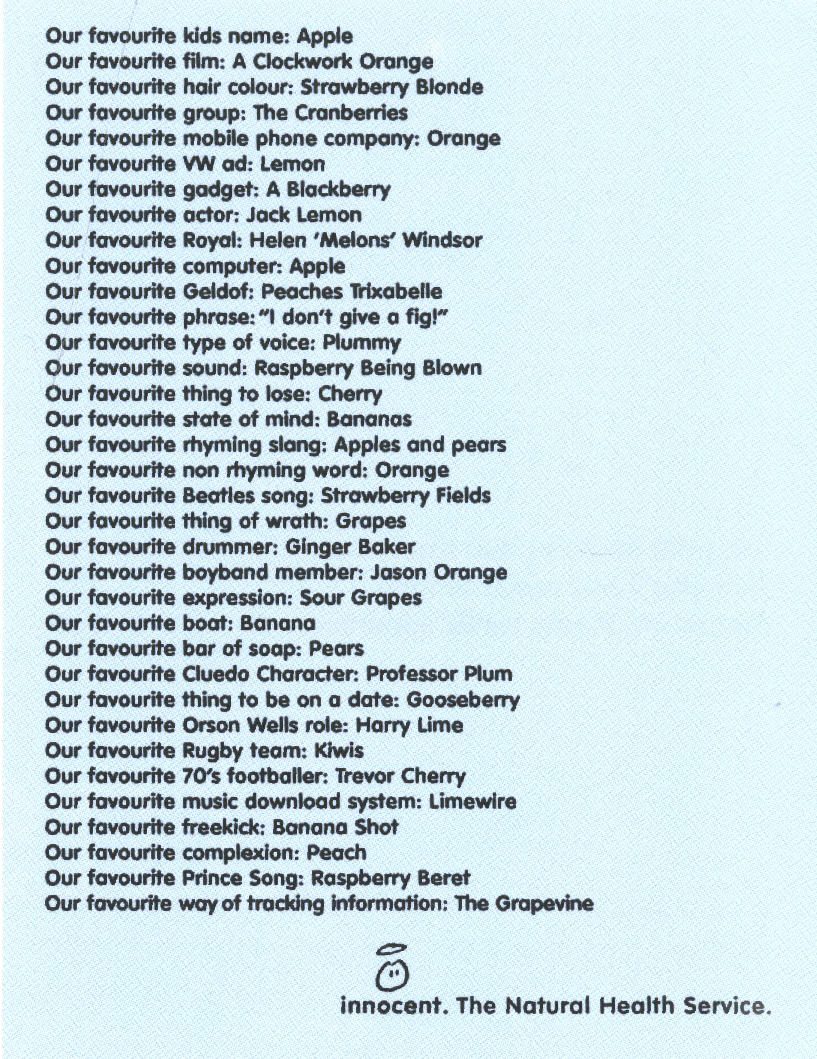 Maybe we could print them as posters and send them out as shops or get people to put them up in-store?
I enlisted our brand new team, David and Phoebe, to come up with more ideas for favourite fruit things.
If we wanted to get people to put it up in-store we’d have to make it look more attractive, more visual some-how.
Maybe I could mix in little pictures with the words, like that old Heineken poster?
But more home-made.
Not corporate. 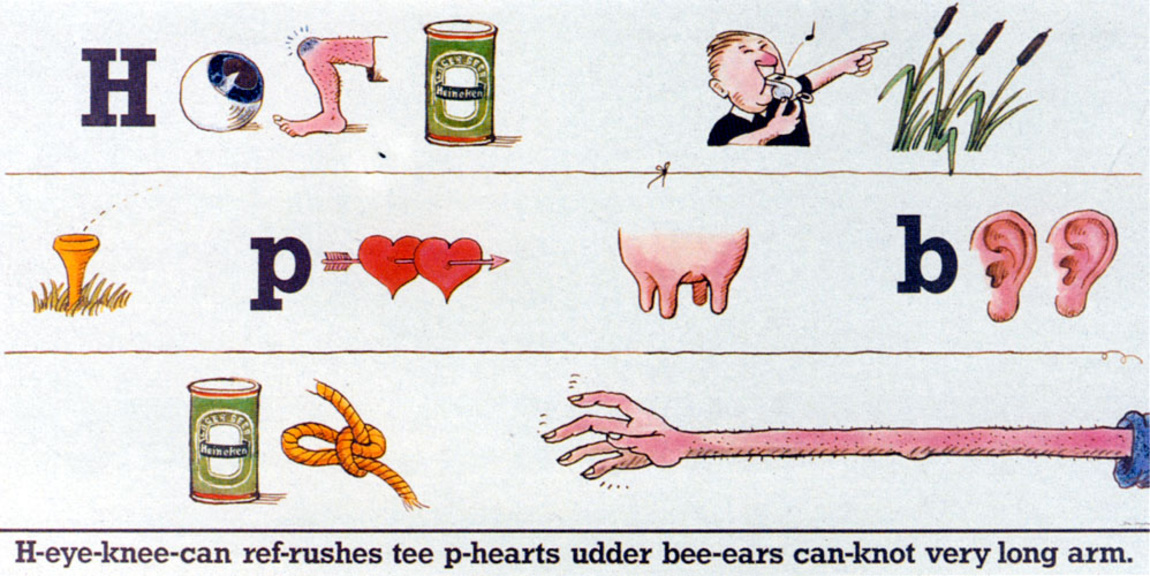 Hayley and Andrew loved it.
I asked if they could raise a bit of cash to get a decent illustrator involved.
They said they could.
I asked if they had any money for our time yet?
‘No. We could send you some more pineapple?’
Another baby-sized batch of dried pineapple arrived in Covent Garden. 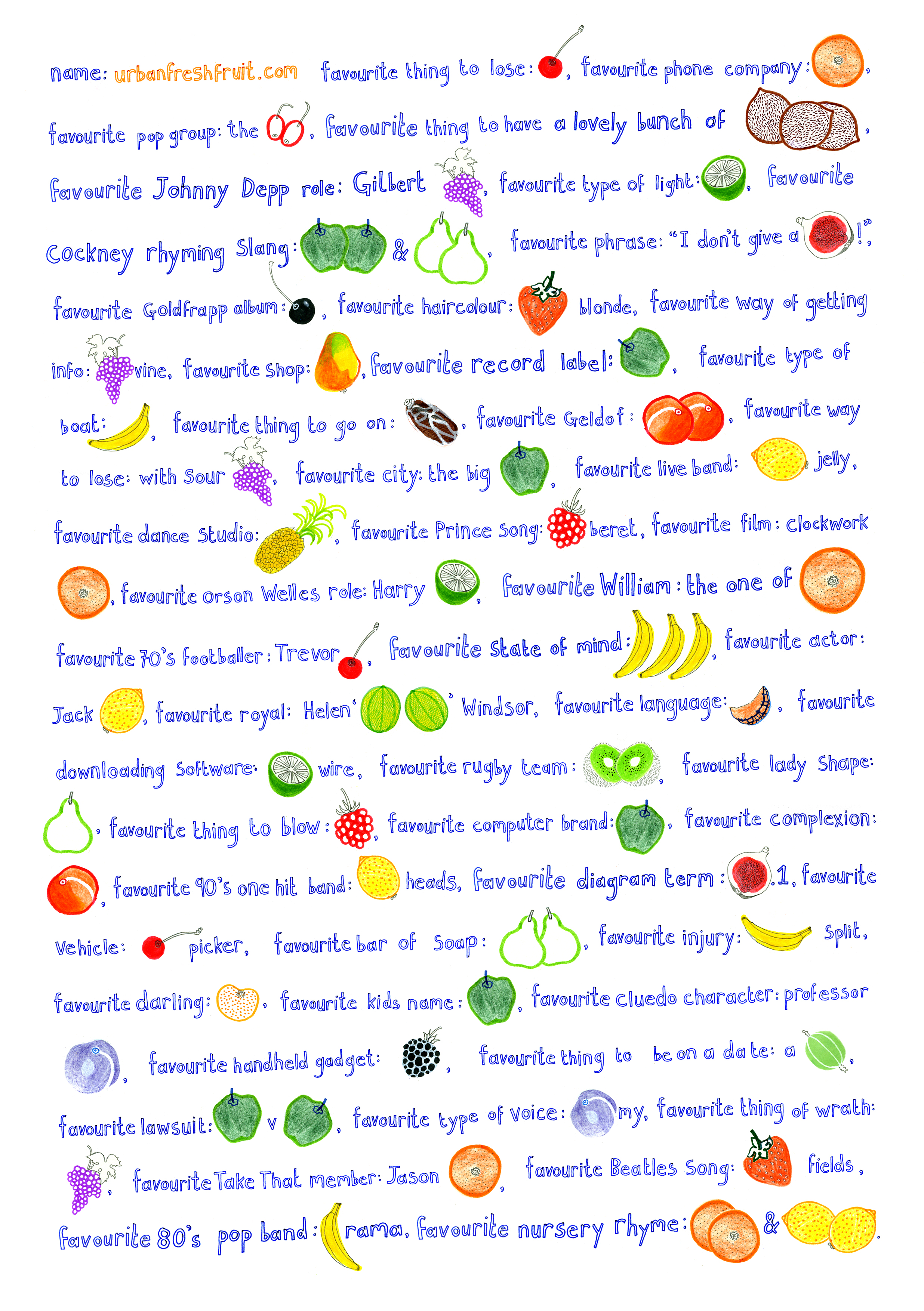 We printed a lot of them.
They were sent out to supermarkets, corner stores and head offices.
It became the ‘warmth and personality’ of the new stand at trade shows and festivals.
Hayley even sold the posters at both, for £5 a pop. 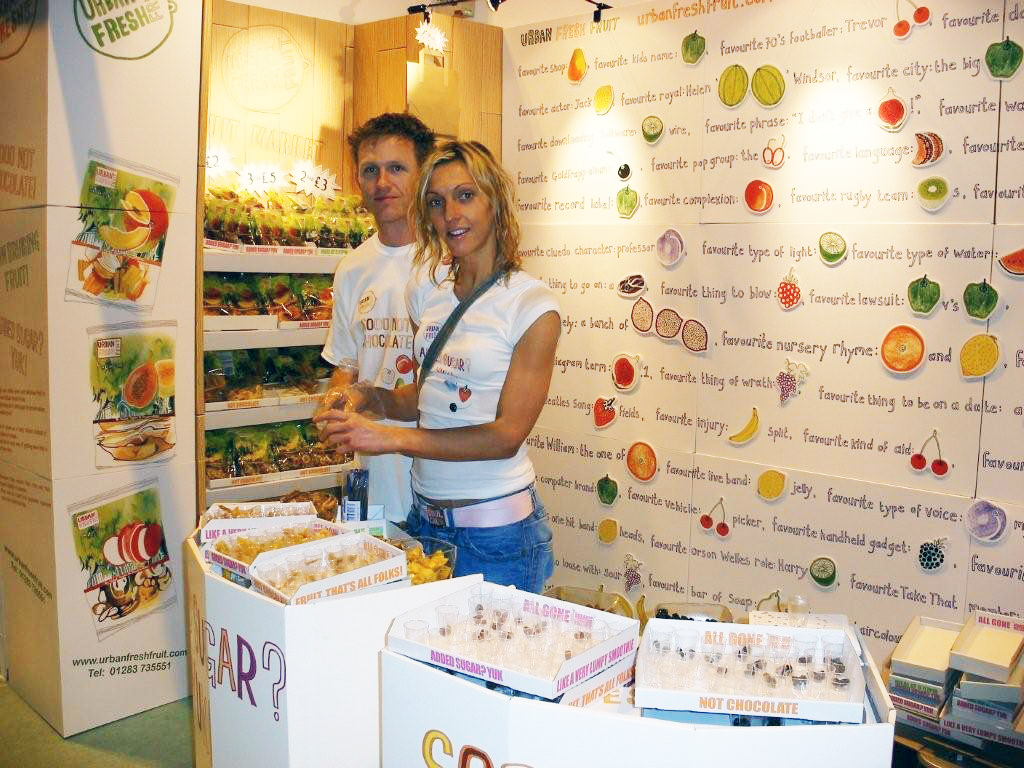 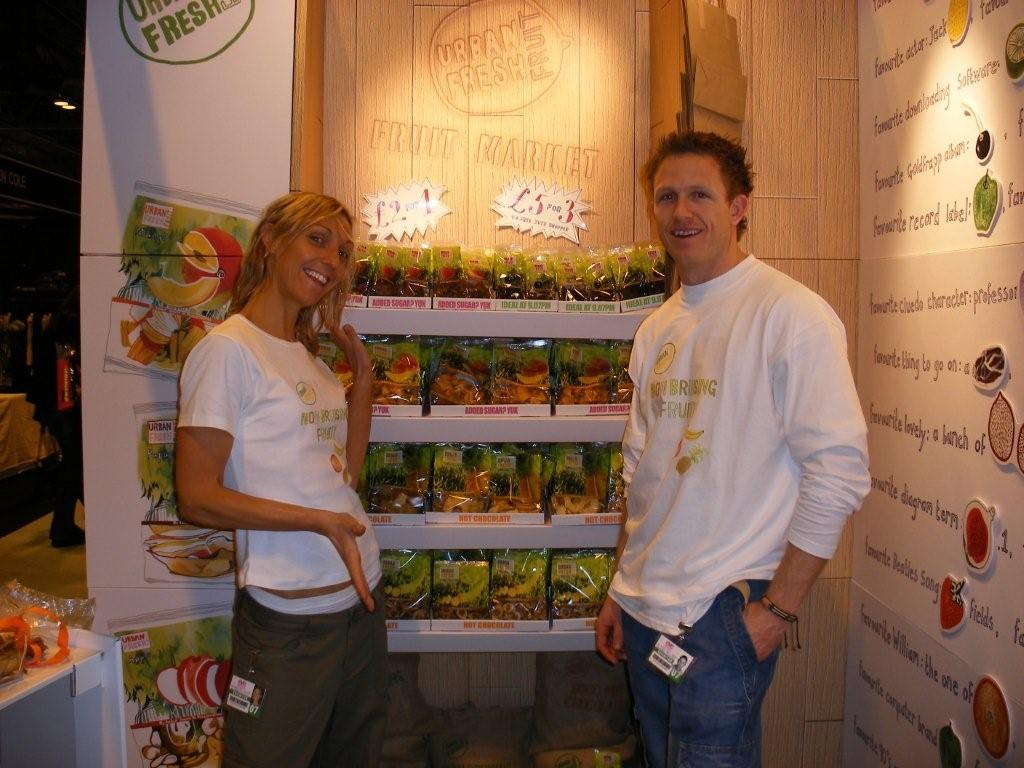 The visual style, wording and phrases used on the new pack design. 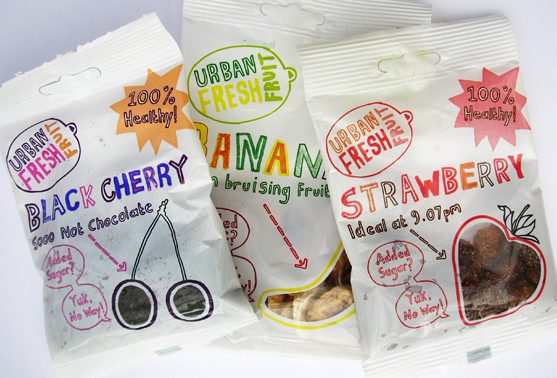 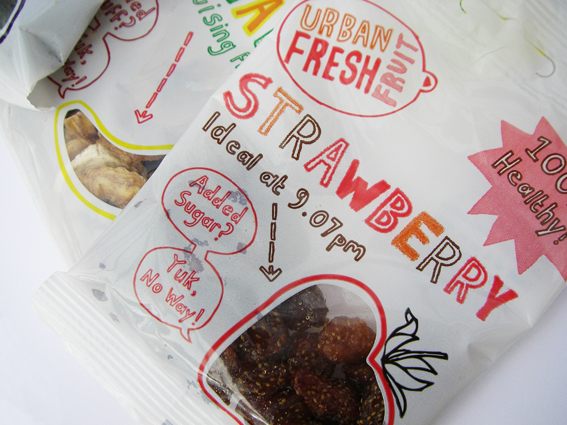 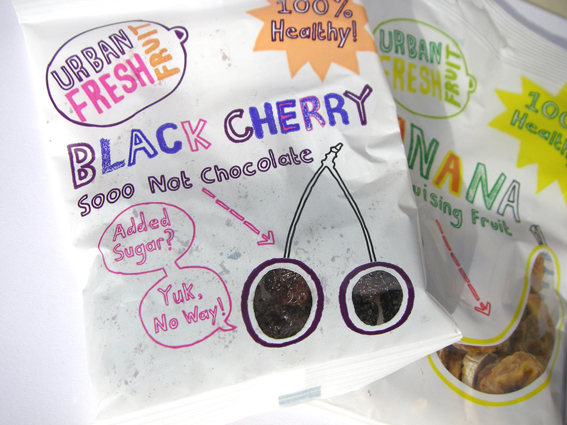 The next phase was actual, paid for media!
Cool, should be fun.
‘Do you have any money yet…for our time?’
‘No. We could send you some more pineapple?’
Ok.
Right, how do we make these things come over as a healthy alternative to chocolate and crisps?
It’s probably best to mention the opposition so that we can give them some context.
Also, we need to make them really pop, oh, and look natural, keep that home-made, un-corporate vibe we had in the poster. 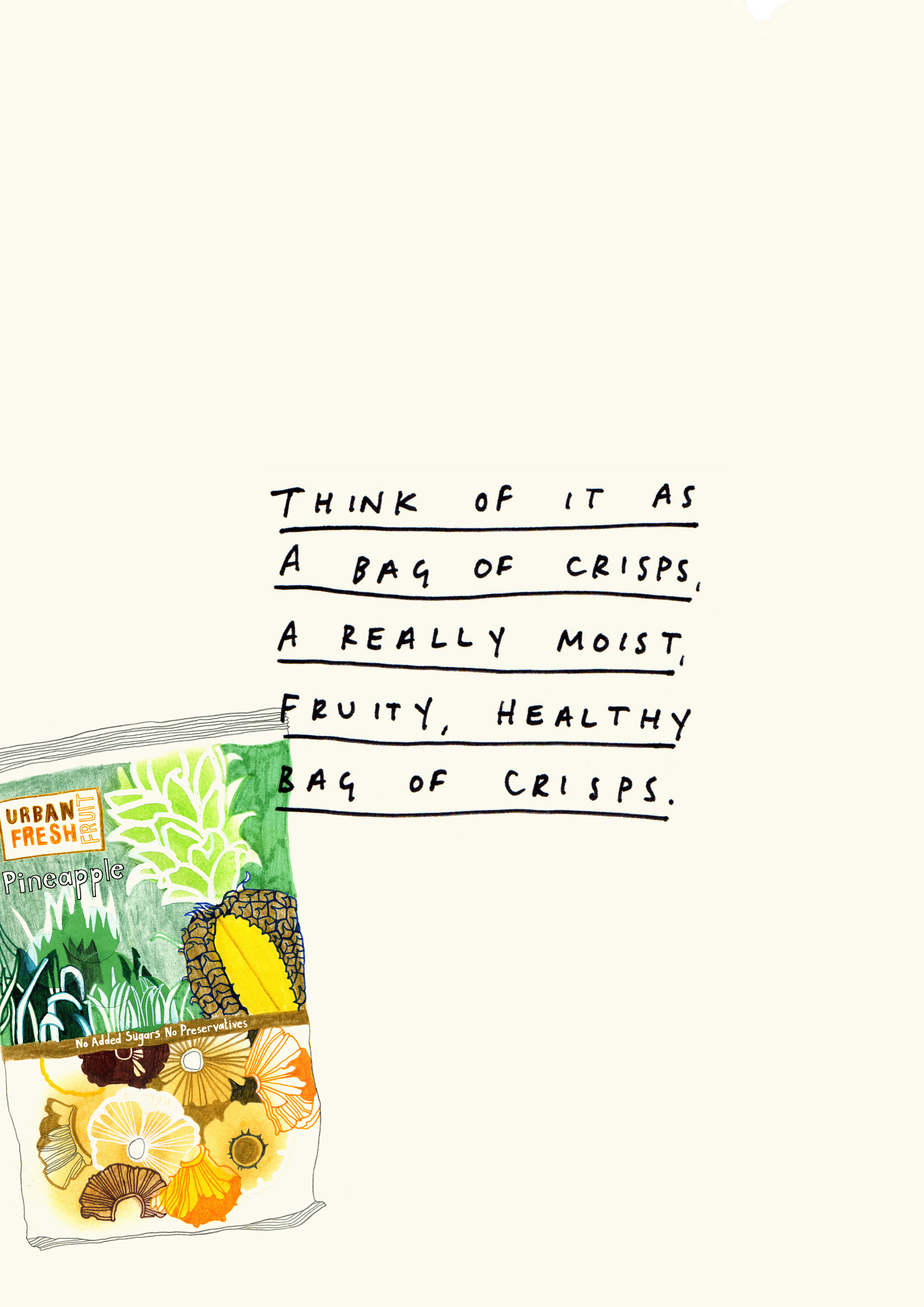 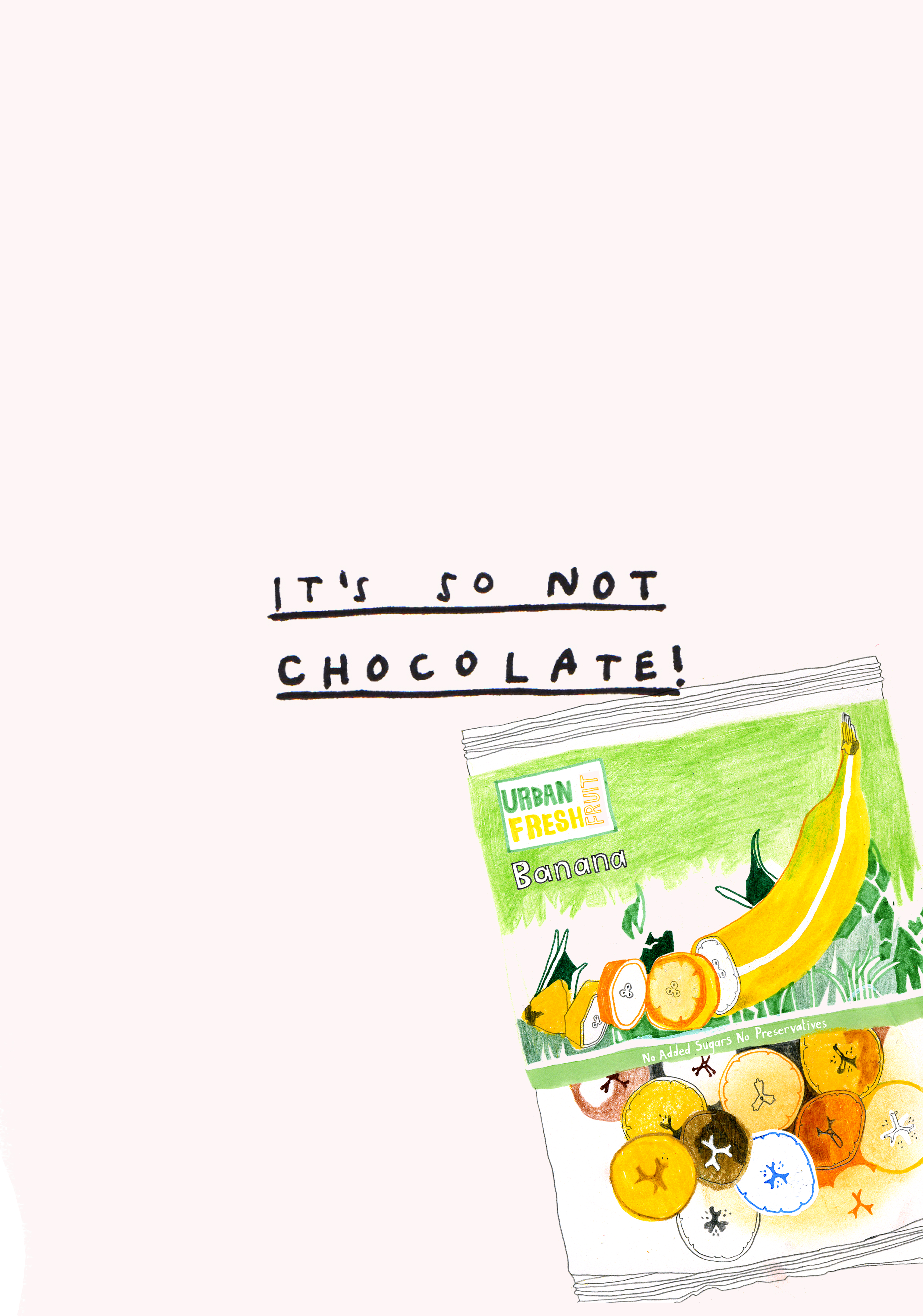 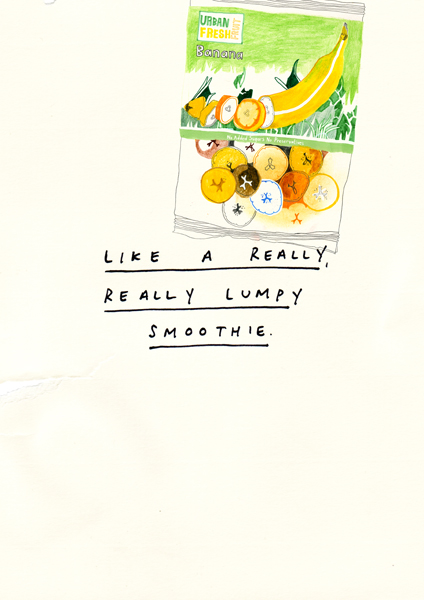 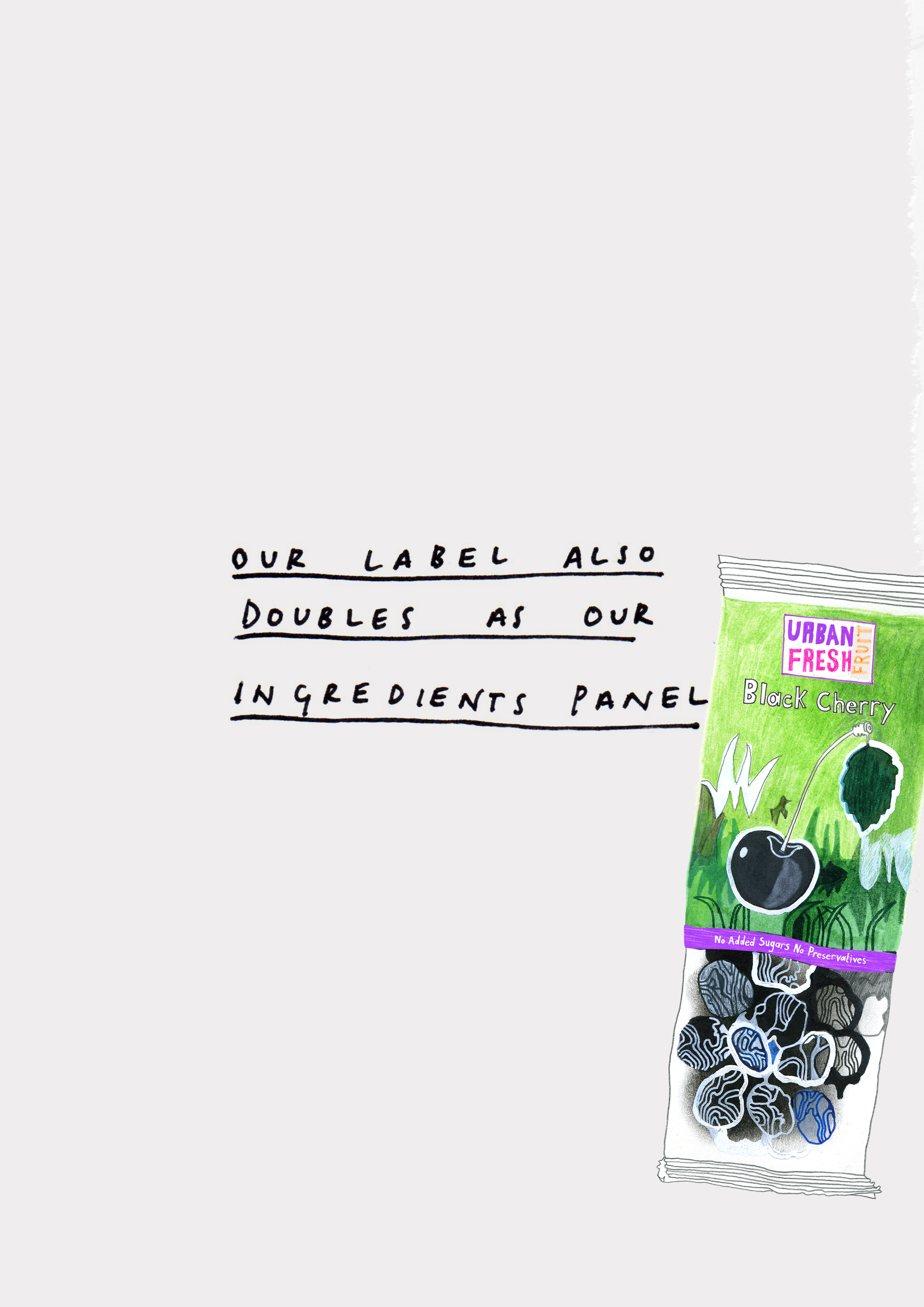 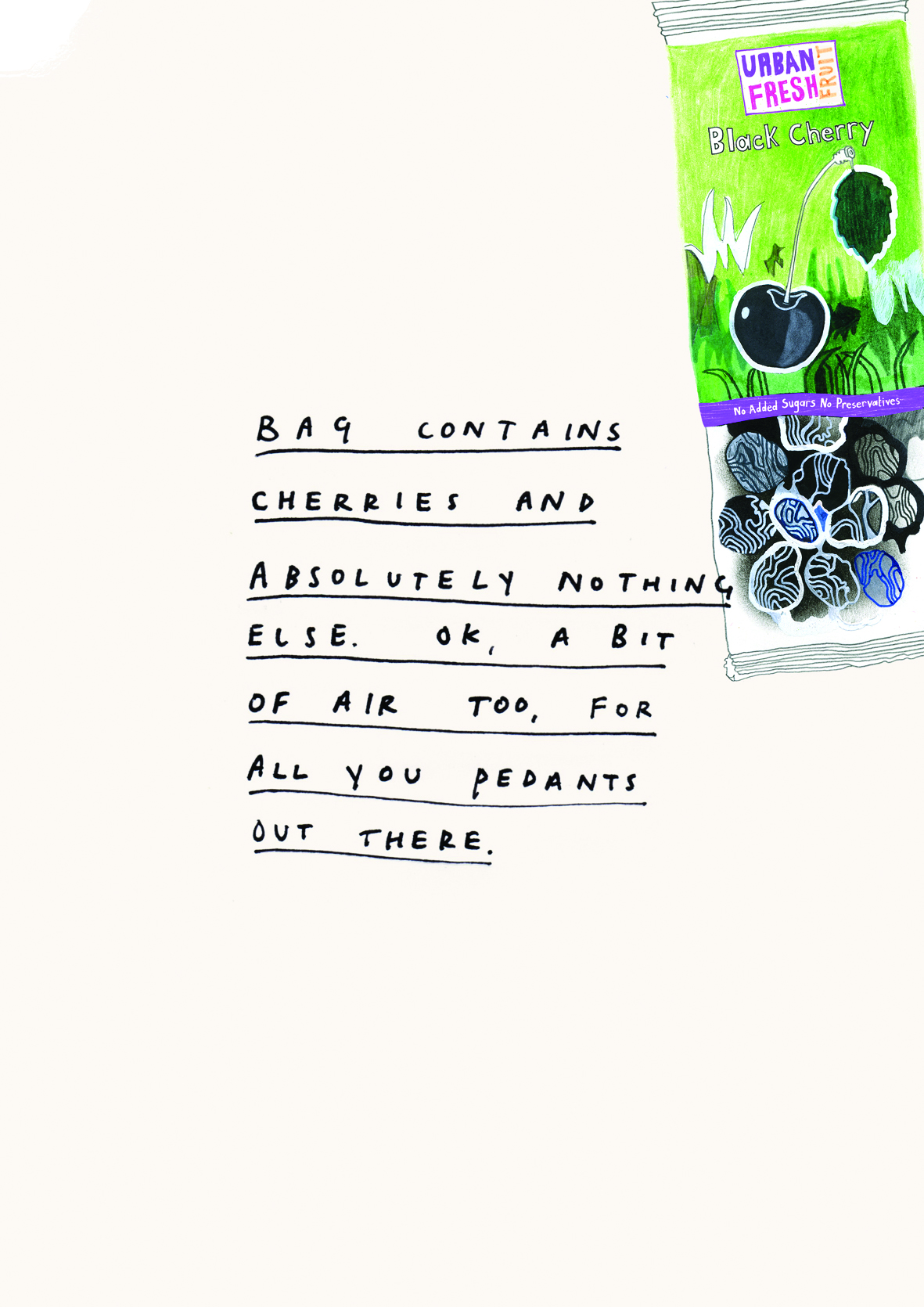 As time went on DHM started to pick up clients who actually paid, it was getting difficult to justify being paid in pineapple.
Hayley said she loved our work and would love to find a way to continue working together.
We talked about taking a small percentage in Urban Fresh Fruit as compensation for our time moving forward.
The sticking point was whether 1% or 2% was fair, and also how much time would that buy going forward?
It wasn’t a stand off, Hayley and Andrew were in no rush to give away any equity and we were doing it simply to justify giving away so much time, not because we thought it would be worth much.
We also had to justify to our accountants, very dyed-in-the-wool, buttoned-down types who were insistent that it’s better for a businesses to be paid in actual money than fruit, old school.
About a year to 18 months in, we reluctantly told Hayley and Andrew we were just too busy to keep working for fruit.
We wished them well.
I hadn’t heard much from them since.
I just came across this. 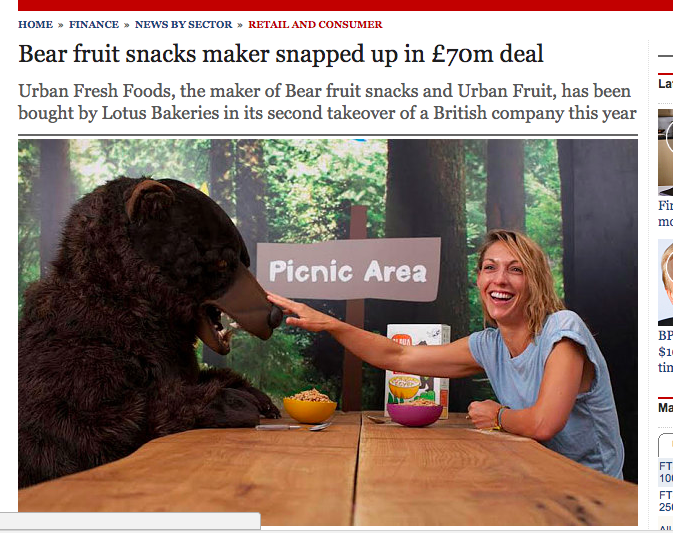 8 responses to Working for fruit.