As a kid I loved anything that was ‘wrong’.
Funny stuff. Dark stuff. Magical stuff.
The stuff I wasn’t allowed to watch.
Stuff that did something fuzzy to your brain.
I’d pick the London Dungeon for a family day out.
I’d ask for Viz over the Beano.
Anything that was naughty and went against the grain.
Anything that stuck in your head for all the wrong reasons.

It’s of no surprise then that nearly all the ads I liked before I knew what I was supposed to like fall into this ‘weird/magical/funny’ category. I’m getting dark flashbacks. I need a whisky and a hug from mother.

I got really into magic as a kid.
I loved the mystery around it and trying to creatively solve how stuff was done.
This was the ad that started all that off.
A young kid with the Fisher Price Magic Set impressing his family with an array of tricks.
I got that set for my fifth birthday and immediately dictated a letter to my dad to send to the Surrey Mirror.
In it, I rather arrogantly claimed that I, Dan Watts, was the youngest magician in Surrey (I assumed this to be true as no one else I knew was doing it) and would they like to do an article about it?
They sent a photographer round to our house the next week and I recreated that Fisher Price ad with my sister and Gran.
Everyone was suitably impressed, and I ended up on the front page sandwiched between “New books in Sutton Library” and “Woman finds hat in tree”.

I mean…its obviously not a great ad. Nor did I think so as a child.
But the endline DON’T TELL THE CHILDREN was the first bit of reverse psychology I ever truly fell for.
How do you get kids to persuade their mums to buy a cheap chocolate mousse? Tell that kid they can’t have it.
Those mousses became a staple at our house.
Don’t think I ever saw either of my parents eat it ever, but I felt like I’d beaten the system.

Fuck me. Seriously. This left a mental scar in my brain as a child that’s still pretty fresh.
I’ve seen a lot of abhorrent things in the last 41 years; from terrorists on the internet to the movie Beaches, but nothing, NOTHING has had the same effect as watching a happy child climb a metal pylon to get his frisbee down before being obliterated into the cosmos via 4000 volts.
I have never gone more than 20 meters near a pylon since nor confidently thrown a frisbee.
Fact.

I know there were a lot of drugs being passed round in the 80s.
Without them we wouldn’t have had Joy Division’s ‘Closer’ or this children’s advert for Kinder Eggs.
I don’t know if the agency was genuinely on a mission to terrify children directly or whether there was a loss in translation between the prosthetics team and the creatives, but either way this was another one that created a strange dark and creepy desire for kinder eggs.
No Germanic looking mother and child laughing over a kitchen table in this one.
Those were the days.

Slightly less dark was this advert for TRIO bars. Less dark…but still rather aggressive and spikey. Sandwiched in-between child friendly kids TV shows like Rainbow and Button Moon this would often come on and jar you out of your calm state.
I never quite understood what Suzie’s problem was. Why all rudeness and anger?
But it made me a little frightened, and a lot curious.
She had a massive angry shouty mouth.
She was ruining the nice calm hippy’s music.
Suzie didn’t say please like us kids were always being told to say, SHE WANTED A FUCKING TRIO NOW!
She was scary and manic but ironically illustrated in the same style as the relatively peaceful Henry’s Cat cartoon.
So confusing.
Of course, I had to demand a TRIO bar whilst shopping with my Mum.
Just see what all the fuss was about.

Ok, so maybe this hasn’t aged particularly well, but cultural appropriation aside (pretty sure they never drunk this in the Congo or anywhere outside of the UK) I loved this.
I loved the slightly drunk animation, the hypnotic song, and the fact that there was an alligator at the end that aggressively clamped its teeth over everything and made the ad explode.
We all bought it at school.
We all sang the song.
We all used to get told off for puffing up the empty carton up with the straw and stamping on it in the playground to make it go BANG, just like the end of the ad.
So, the ad definitely worked.
Maybe just tone the racist undertones down next time, yeah?

Ok so I have no idea why this in here, but I remember loving it.
It’s the opposite of dark and funny so in hindsight I’m not sure why it stuck out. Maybe it just worked on a very simple level.
My toothpaste as a child was dull and samey and this promised three different colours.
Yes, I’m that easy to sell to.

As a 10-year-old I used to love Russ Abbott.
My Grandad used to hate Des O’Connor.
So we kind of bonded over this advert.
I remember it coming on TV whilst we were both watching and both of us finding it hilarious.
Me because it was Russ Abbott and anything he did made me laugh, my Grandad because it cruelly and cynically mocked Des O’Connor.
I clearly wasn’t the target market for cigars but if I had been, I would have bought some.

I remember telling everyone to SHHHH when this came on because it was as funny as some the comedy on TV at the time…indeed it became its own TV show Creature Comforts.
What ads do that today?
This work was before Aardman was an overused bit of borrowed interest.
Animals talking like voice of the public was really fresh and funny.
It’s the little gulp of the tortoise, kind of panicking in front of a camera, but trying to keep it together, that really got me.
Attempting to say something smart but it all coming out as mild jibberish.
We’ve all been there.
“Turn off and on-able” is still hilarious. It was kind of Karl Pilkington everyman humour before it was a thing.

As young teenagers, this was one of the ads that made us all buy more Tango.
It was before the time of Punk’d and prank style internet videos.
So, we believed it.
An official man saying official things about a soft drink.
This spawned many an urban legends around the playground.
That still Tango was fake – that still Tango’s black bottles were turning the sugar into alcohol in warehouses and the Feds were on the case.
We felt naughty drinking it.
Of course, in hindsight, it was clearly bullshit, but at the time we all thought we were being well naughty drinking it.
Well naughty drinking…flat Tango.
We were suckers. 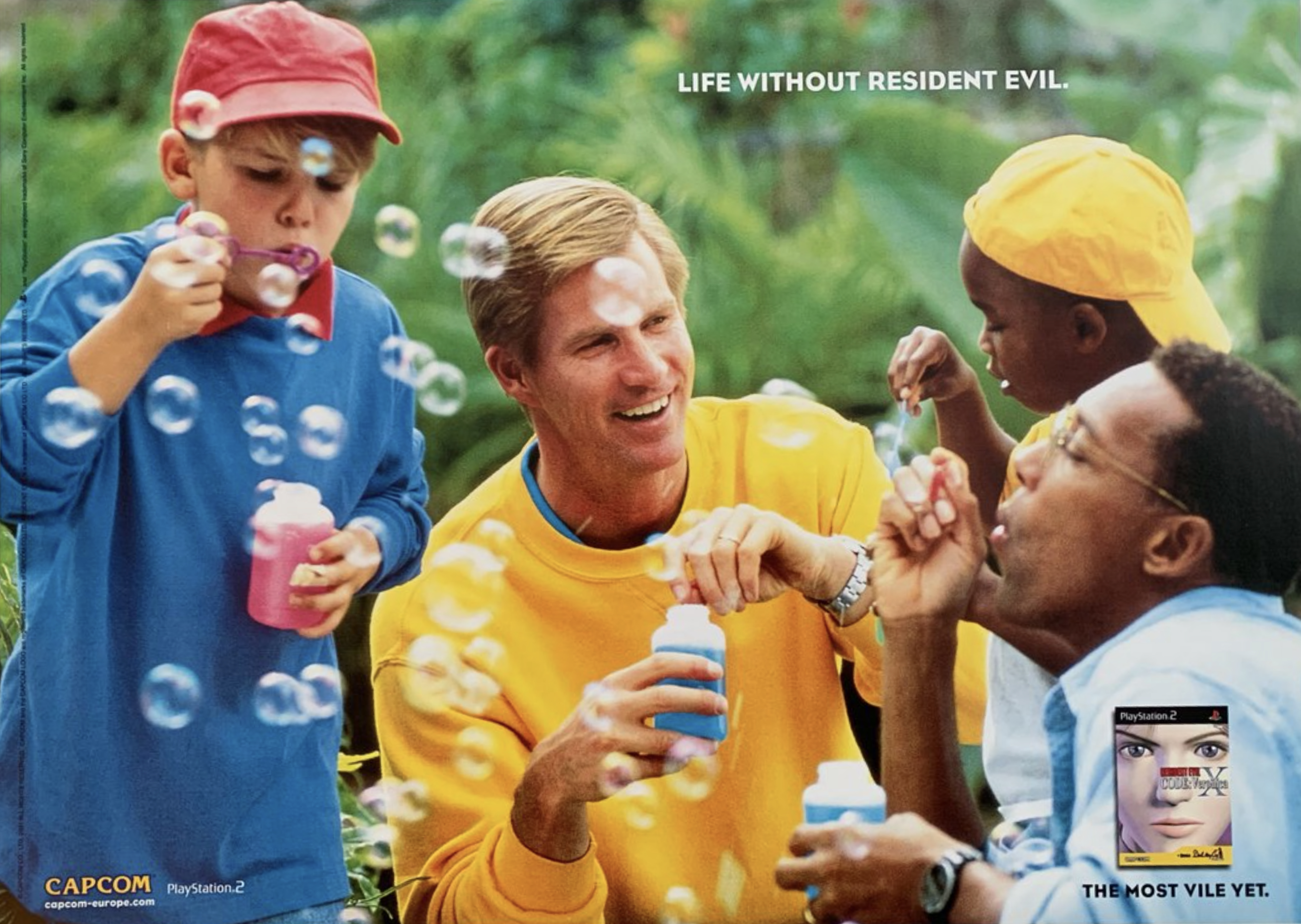 This one is blurry.
I THINK I saw this before applying to Watford, therefore technically…it fits into the W.I.L.B.I.K.W.I.W.S.T.L. category.
Or it might have been just after.
But it was one of the first posters I remember seeing that made me want to be a creative.
It was a massive billboard right next to my mum’s house.
It was so chilling by being so sweet and lovely.
It left your imagination to run wild ‘just how fucked up must that game be?’
As an avid gamer growing up, I’d never wanted to buy a game more.

My Dad practically lived on cigarettes and Alka Seltzer (which in hindsight should have been a bit of warning sign) and it was one of those brands that were part of the household growing up.
And it’s ads I always remember as straight forward and hilarious.
But this was the one that stood out – in fact it was another one of those that made me want to do advertising, coming out around the time I was leaving school and getting into D&ADs, Watford courses, and meeting agencies.
Of course, I later learnt it was heralded in the industry as the sort of work every creative should aim for.
Super simple.
Brutally funny.
Held together by a brilliant campaign thought.
And causal cannibalism.
What more could you ask for?
It was co-written by Pat Doherty (and Greg Martin) who years later helped train young creatives like me on how to present their work.
Dave, you should get her to do one of these – she was ace.

This has been like a weird advertising therapy session.
It’s funny how things stick in your head for different reasons.
There’s so much content and stuff nowadays you’d think you’d remember more of it.
I rarely do.
Maybe its because I’m hitting that age where my memory is declining (I’ve started doing that thing my Nan did where I get my kids names the wrong way round) or maybe it’s because 99% of advertising is one massive mood-film manifesto, intent on saving the world through a hashtag for spreadable butter?
Anyway, this exercise has proved that I STILL remember Um Bongo and drinking it solidly for 3 years (just to clarify I am in no way a racist, I just liked the taste).
I STILL have post-traumatic stress witnessing that young boy exploding on a pylon.
And I STILL remember the day, 36 years ago, that I was put on the front page of the paper thanks to Fisher Price.
Sometimes…just sometimes…advertising works.

2 responses to WHAT I LIKED before I knew what I was SUPPOSED TO LIKE – Dan Watts.